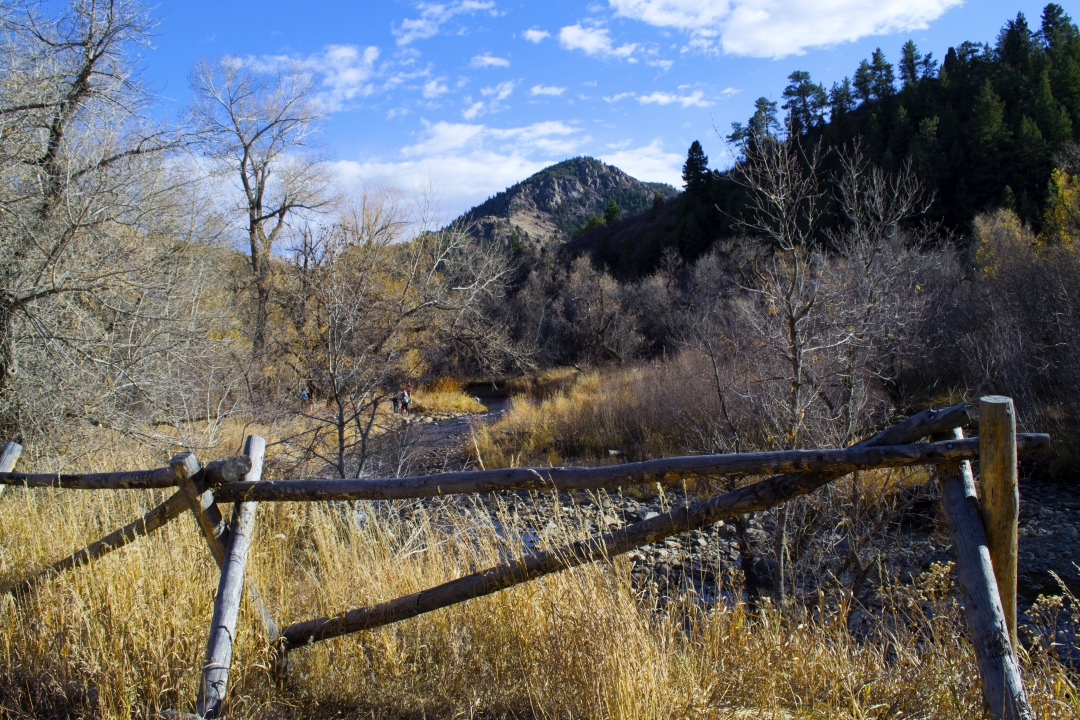 It continues to be gorgeous weather here in the Front Range and so we decided to go hiking with Will and Moses in the Foothills on Saturday, November 12th.  We had heard of a little park called Lair o’ the Bear Park near Morrison in Jefferson County and began to drive that way.  The drive was scenic and short compared to most of our hikes; and we arrived at Lair o’ the Bear Park in the early afternoon.  Parking was close to full, but there were spots left.  We hopped out and began to explore the trailhead and our options.

The options at this park are numerous, and so we came back again on Friday, November 24th.  As crazy as it seems, the trails were still relatively clear of snow even as we get close to December.  Our first time out we walked on the Bear Creek Trail, which runs along Bear Creek, until we hit a bridge that led us to the Bruin Bluff Trail.  The Bruin Bluff Trail loops around the park and gives some pleasant views from the hills to the south of the park.  As we looped back around, we met back up with the Bear Creek Trail and followed the trail back to the parking lot. On our next adventure, we opted to visit a castle we had read about which is located about a mile out on the Bear Creek Trail.  We hiked approximately one mile to Dunafon Castle and then kept going another half a mile to Corwina Park. This was an out-and-back.  Both hikes were around 3 miles, and below are details and pictures from our adventures. 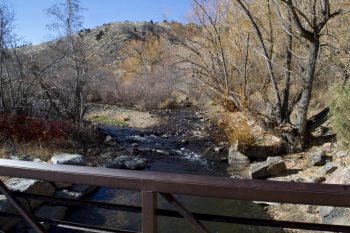 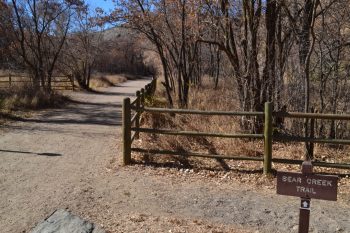 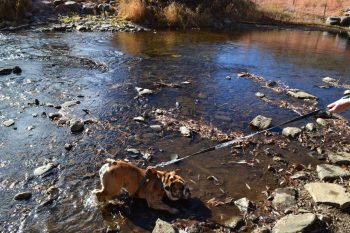 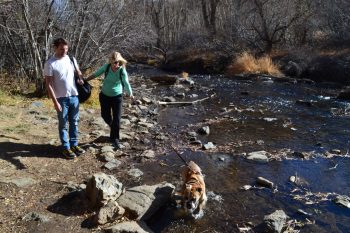 Above you can see the start of the trail with the sign. This path leads to the bridge pictured above as well.  Moses really enjoyed the water, and  the weather was amazing.  From here you can continue on the Bear Creek Trail towards the castle or head over the bridge to either the Bruin Bluff Trail (as we did the first day) or the Castor Cutoff Trail, which bisects the Bruin Bluff Trail and the Bear Creek Trail. 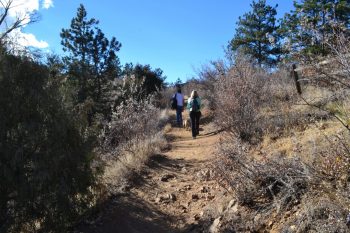 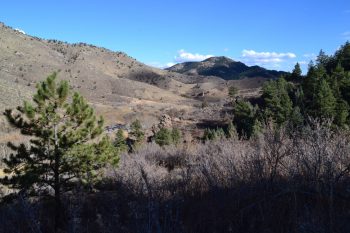 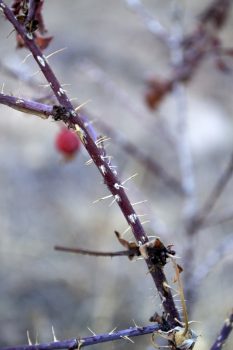 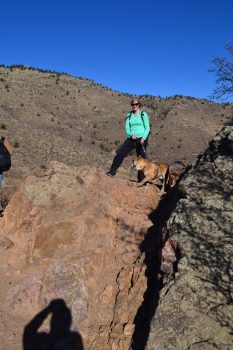 Bruin Bluff Trail leads you up into the hills just south in the park.  The first portion of the hike is in gorgeous pine trees and is shaded from the sun; the second half of the hike is tall grass with sparse trees.  At the apex of the trail, there is a rocky outcropping that is great for taking pictures. You can see ours on the bottom left.  A word of caution, there are some thorny plants along the trail, so try not to veer off the trail or else you may get scratched. 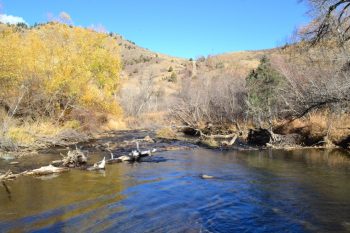 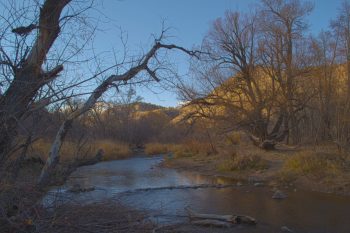 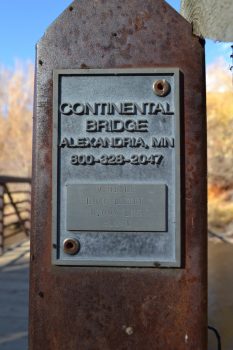 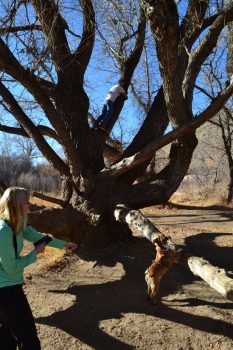 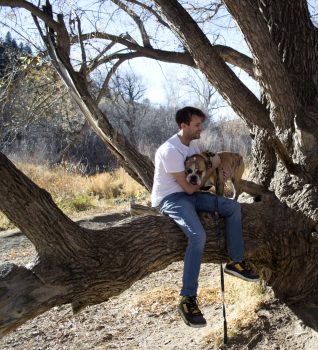 There is a fork in the trail as you descend from the hills, and you can loop back to that first bridge by taking the Castor Cutoff Trail; but we wanted to see more of the park and therefore took the Bruin Bluff Trail to Ouzel Bridge.  The bridge itself has a neat plaque on it with some information from the maker of the bridge.  The creek is picturesque here, and there is a large tree with low lying limbs that everyone seems to like to climb.  This area also has large picnic areas and grills, and could be a nice family spot.  Moses wanted to climb the tree really bad when he saw Will going up, and he got hi

s wish with some help.

There are quite a few trails leading off from Bear Creek Trail, almost all of them go to the water.  One very interesting trail we explored had an arch made of plants that led down to a beach.  The Creekside Trail does run along the creek as well, and is a nice short diversion from the other trails. However, there are many other unnamed trails to explore.  Just be careful, since erosion can be a problem and damaging the wildlife isn’t anyone’s goal.

Also, the park had a sign that mentioned a problem with New Zealand Mud Snails.  The sign warned anglers on how to sanitize their boots and clothing if they go in the water.  Because of this, it would probably be a good idea to head this warning signs if you do travel down into the water.  The snails themselves are tiny, only about 4-6 mm in length on average, and cause problems for the ecosystem.

To the left you can see Will standing under the arch on our way to explore the beach.  After the beach we continued on and found a little deck that was a nice resting spot for Moses and also had some interesting information on the creek.  Being so close to the Continental Divide, we sometimes take it for granted, but by definition, all the water on the east side of the divide flows into the Gulf of Mexico or the Atlantic Ocean.  The creek here flows for 15 miles to the South Platte River, which flows for 650 miles until it merges with the Missouri River on the Nebraska-Iowa border, and from there it flows another 2,500 miles to the Gulf of Mexico.  Thinking about the journey the water was going to take that we were playing around in was quite humbling.  Below are a few pictures from the end of the hike. 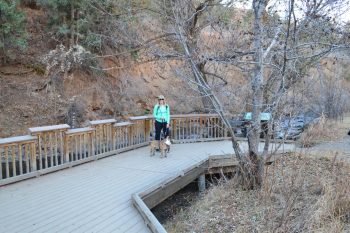 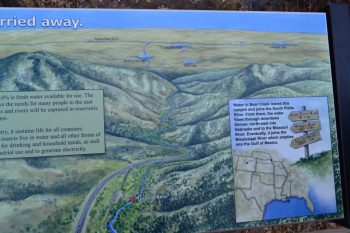 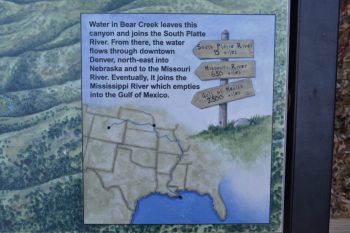 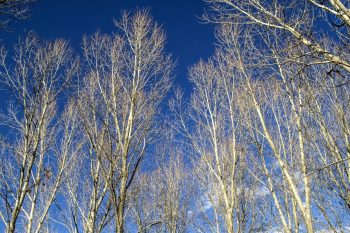 Our next time out was about two-weeks later and it had snowed since then.  The first part of the trail was clear of snow and the temperature was nice, especially in the sun.  But as we moved into a valley the temperature felt like it dropped about 10 degrees, and we encountered some ice on the trail.  We had one or two near slip-and-falls, and Moses tested out his 4-wheel drive on the ice, but realized that even he can’t manage on pure ice.  Despite this, the trail was very nice, and the day was once again perfect. 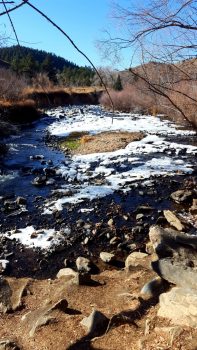 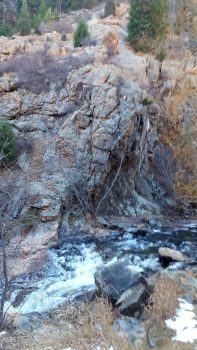 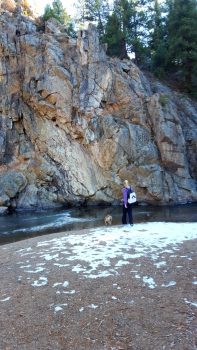 You can see above a panoramic image of one of the more icy sections of the trail, but nonetheless the trail was not completely covered.  You can also see the creek from the beginning of the hike and compare it to the hike 2-weeks earlier.  There are numerous places to stop and play with the dog along the hike to the castle, and there were a good number of hikers out with their dogs.  Moses was very excited and was sad that he couldn’t play with every dog he met. 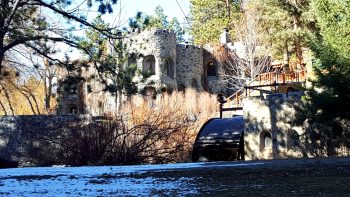 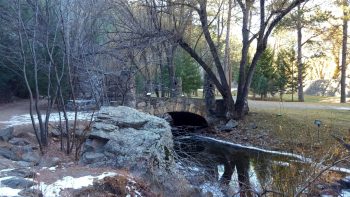 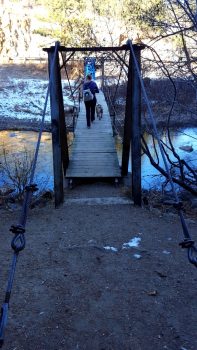 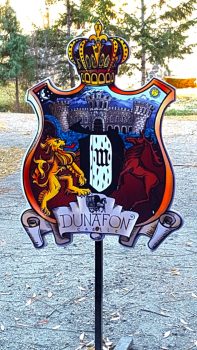 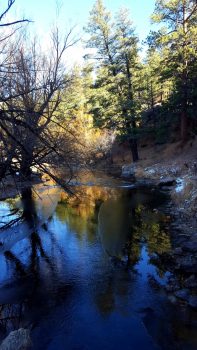 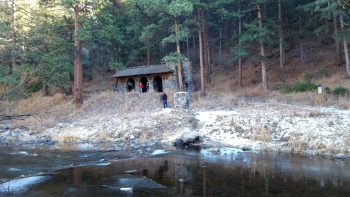 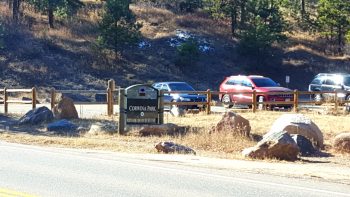 As we approached the castle, we heard it before we saw it.  There is a large watermill attached to the castle that — when spinning — makes a loud low rumbling sound (it’s pretty awesome). The castle itself is off-limits to the public, but can be booked for events.  We took a picture of the crest of the castle that stood on a barred bridge leading into the grounds of Castle Dunafon. After enjoying the castle for a bit, we kept going on the trail and approached a new park (Corwina Park).  This park doesn’t appear on many maps, but it is there with a parking lot, and there is a rickety bridge that leads to an old pavilion.  We crossed the bridge and took a look around.  It would be an awesome place to have a fire; but there is a complete fire ban in effect throughout the area, and so that is not currently an option.  After taking some more pictures, we realized that it was probably time to take Moses back to the truck.  We could have continued, and there is a trail that leads from Lair o’ the Bear Park to Pence park, which is a nice mountain bike trail (about 12 miles long).  The plan is to go back with our bikes and ride the trail next.

All things considered the park offers plenty of activities and diversions; from picnicking, to hiking, to mountain biking there is always something to do here.  We’d recommend this for anyone wanting to get outside in a group with mixed abilities, as the trail is easy and almost anyone can do it.  The options on distance are nice as well.  Whether you want to take a long 12 mile hike or a short 1 mile jaunt along the creek, it’s all up to you.  After your activity, we also recommend stopping in Morrison for some food and drinks.  We particularly like the The Cow and they have a great happy hour.  Cheers! 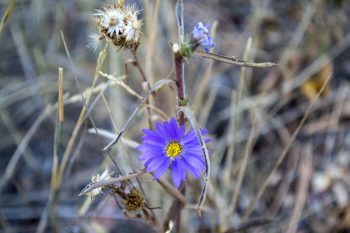 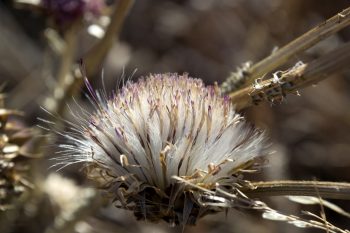 One thought on “Lair o’ the Bear Park”