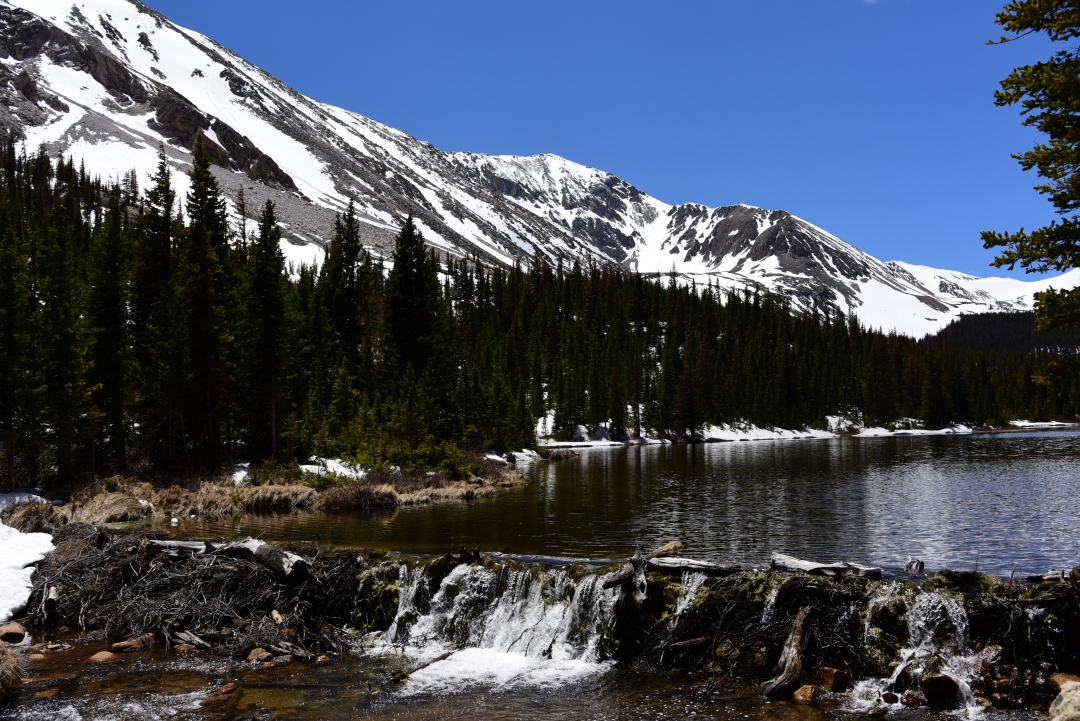 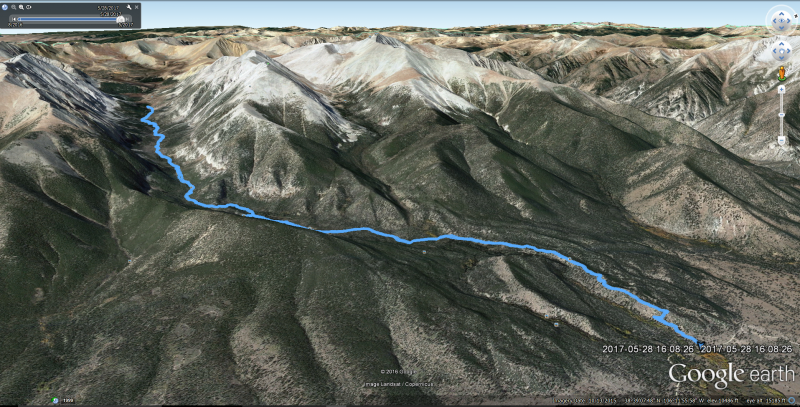 Memorial day was finally upon us this year, marking the quintessential start to summer and the brilliant array of activities that accompany this change in season. However, while Denver was awash in bright sunlight or bathed with warm rain for most of the month, the high country in Colorado continued to get blanketed by late season snow of the wet and heavy variety.  May 29th marked our 7th wedding anniversary, and despite no promise of prime conditions, we were determined to seek refuge in the mountains to celebrate.  On  Saturday May 27th,  we piled into the truck on little sleep and headed southwest towards Salida, CO in the hopes of bagging Mount Shavano and kicking off the climbing season early. Due to a little procrastination on our part with lodging, we were left with the Monarch Mountain Lodge off of Hwy 50 as our romantic getaway.  As we pulled into the lodge late afternoon, we were greeted by a creeky old building that looked as if it was many years past prime time. We wandered through the doors and were greeted by a single employee that informed us that there was no restaurant and no bar as advertised. We were disappointed but figured since we planned to rise at 4:30 in the morning to summit Shavano, it would be of no consequence. To make a long story short, the hotel was too noisy to sleep from dogs barking and holiday revelers, and we couldn’t fall asleep until 3:00 or so in the morning. Sadly, we had to forgo plans on any summit attempt on our trip to due to sheer exhaustion. Despite our disappointment, we got a few more hours of sleep and opted to head late morning to Browns Creek TH and complete a waterfall and lake hike.

To reach the trailhead coming from Salida, we went north on Hwy 285 and made a left (west) on County Road 270 and traveled for several miles on a dirt 2WD road to reach the TH. There is a smallish parking lot there with room for 25 or so cars. Browns Creek flows in a beautiful canyon with 13ers Mt. White and Jones Peak towering on each side. The trail starts at just under 9,000 ft and reaches 11,300 at Browns Lake. We started the hike just after 10 am with a clear blue sky in front of us. Immediately the trail gains elevation, with absolutely no warm-up time. We weaved in and out of the trees for about a mile until the path reached a ridge and briefly flattened for a bit giving way to exquisite views of the surrounding valley and mountain ranges. At these elevations, we were pleasantly surprised to not find any snow or mud. 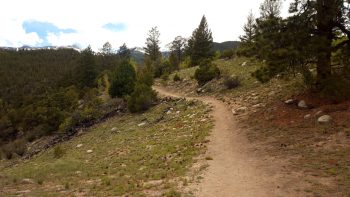 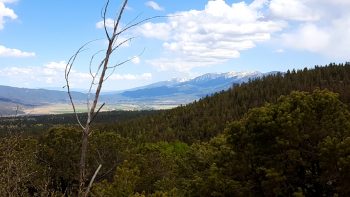 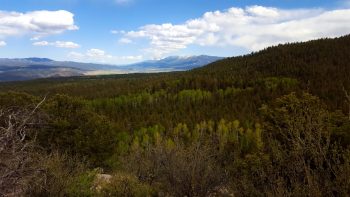 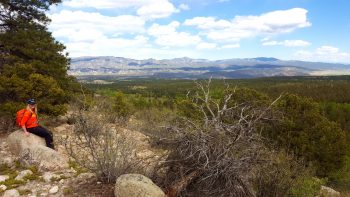 About halfway to the waterfall (1.5 miles), the elevation gain eases up quite a bit and eventually the trail opens into a beautiful meadow. The sandy path through this portion is wide and easy hiking. We followed it pleasantly and reached our first creek crossing which we navigated with a perfectly placed and constructed log bridge. Shortly after, the trail meets another creek crossing, with a heavier waterflow. The majority of this hike is near freshly flowing water greeting guests with one of nature’s peaceful rhythms. Seen below are photographs from the meadow and creek crossings prior to reaching the waterfall. 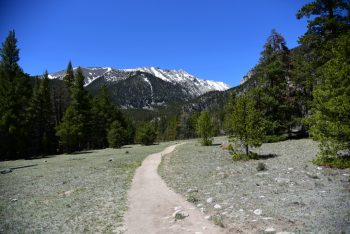 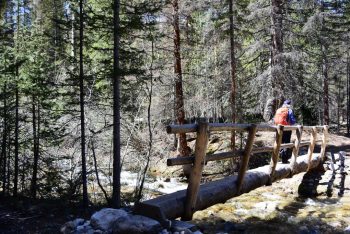 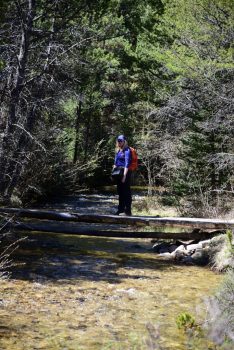 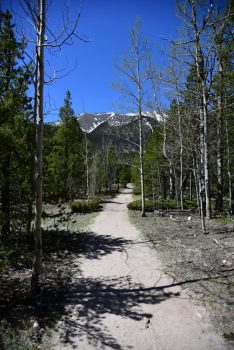 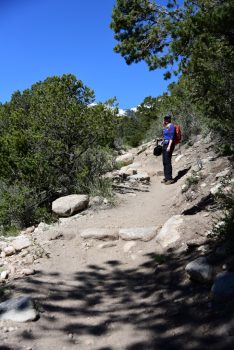 After these two creek crossing, the trail fairly quickly reaches the waterfall. There is a sign that says Falls directing hikers to the left on a short social trail. We excitedly veered off the main trail, as we heard the powerful rush of the water plummeting downstream. The Browns Creek Waterfall is absolutely amazing, and in our opinion, even rivals that of the famous Ouzel Falls in Rocky Mountain National Park’s Wild Basin. There were several large boulders to sit on near the falls to enjoy a snack and the pleasant sounds of the roaring water. Several hiking parties were at the lake, but there was still plenty of space for everyone to see and enjoy. We spent about 20 minutes here taking photographs and relaxing in the warmth by the water. 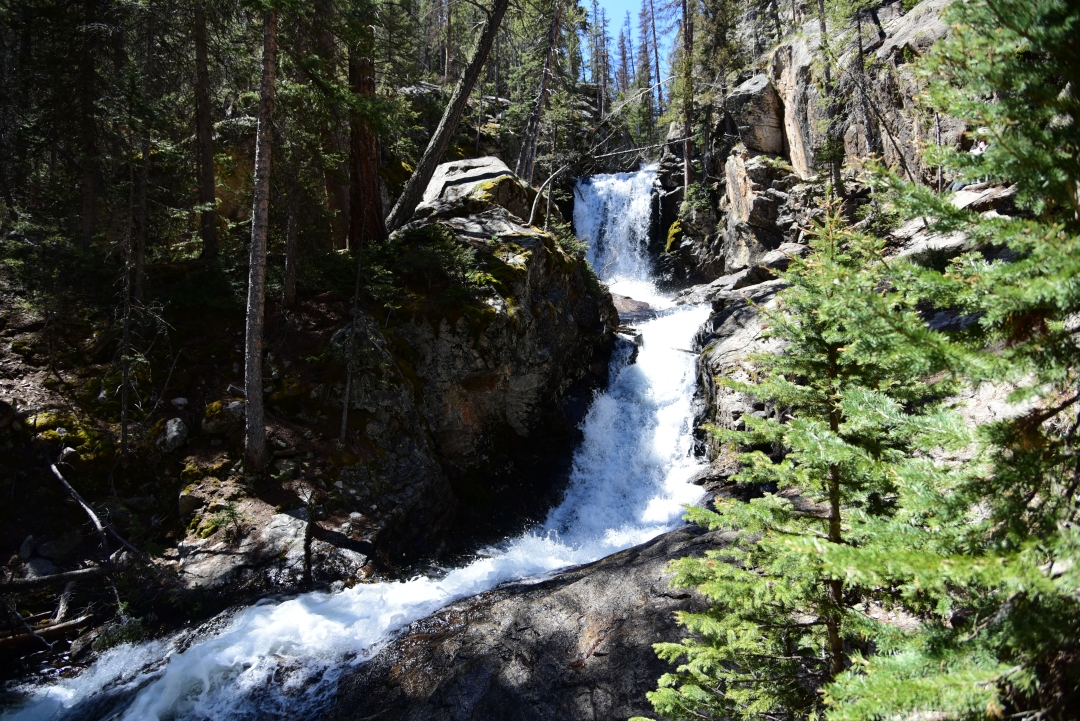 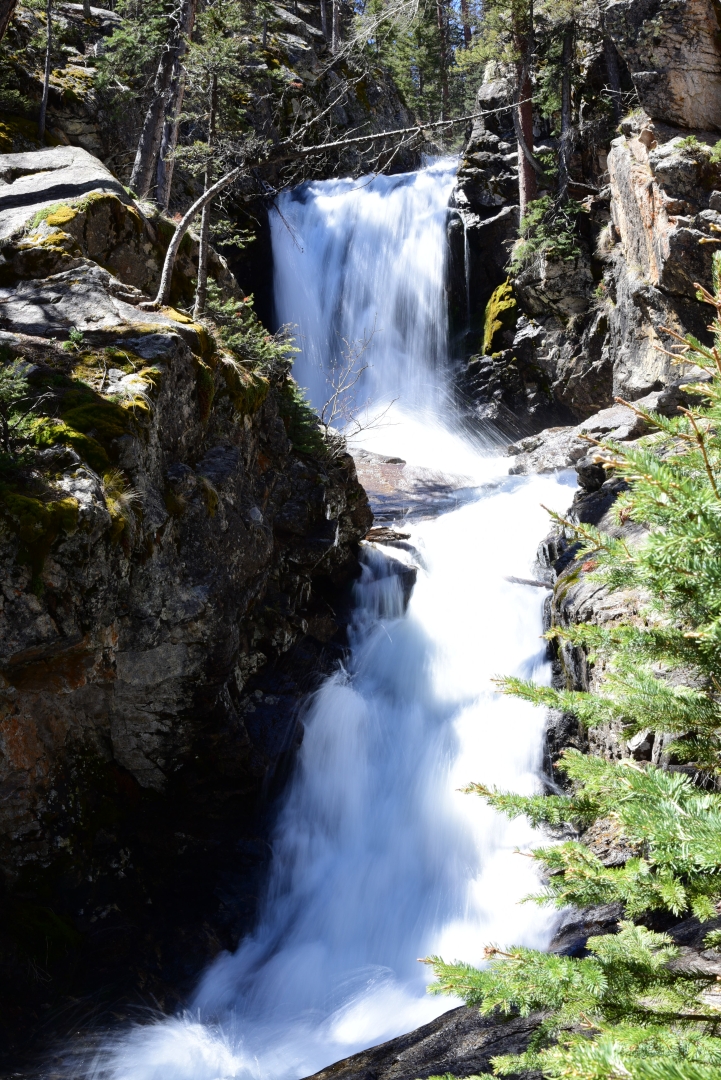 It was still very early in the day when we reached the falls and barely a cloud was in sight so we decided to head back to the main trail and hike another 3 miles to Browns lake. Our enthusiasm began to wane about a mile an a half into this second portion of the trek. After the falls, the trail becomes infinitely less popular. We navigated lots of rocks and fallen trees as we began another rapid gain of elevation as we followed along the northern side of Browns Creek.  It is apparent by the newfound ruggedness of the trail that many people turn back at the falls. Despite our fatigue from a less than stellar night of sleep and the intense rays of the sun, we felt that we had gone too far not to see the lake. Once we emerged from thick forest of conifers and ponderosa pines, the views from the trail became much more enticing. We were greeted with powerful granite snow capped peaks of 13ers dwarfing us from either side. Seen below are photos prior to reaching the lake. 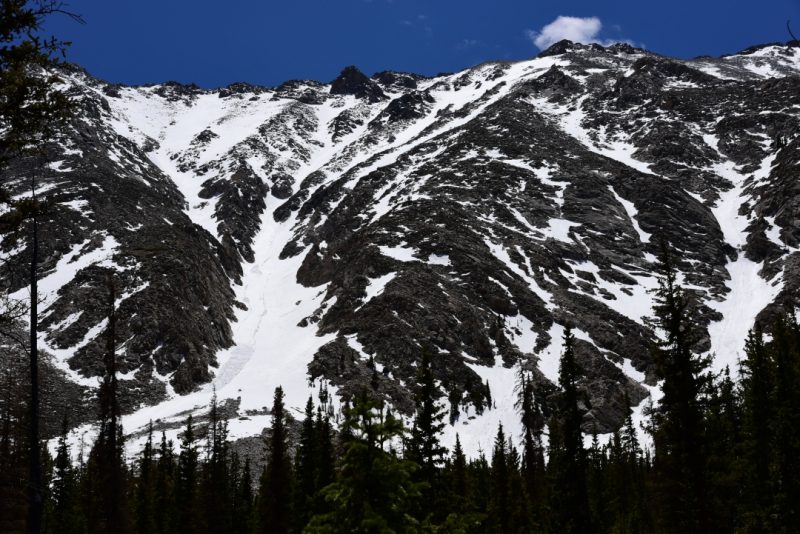 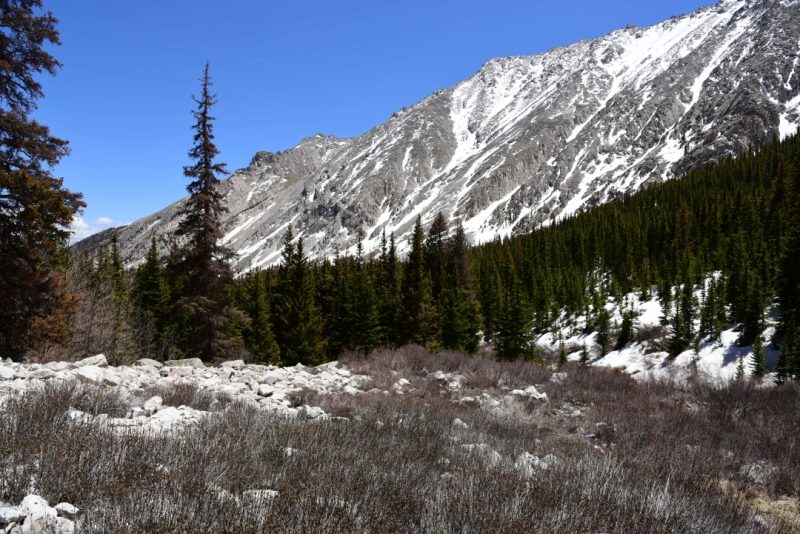 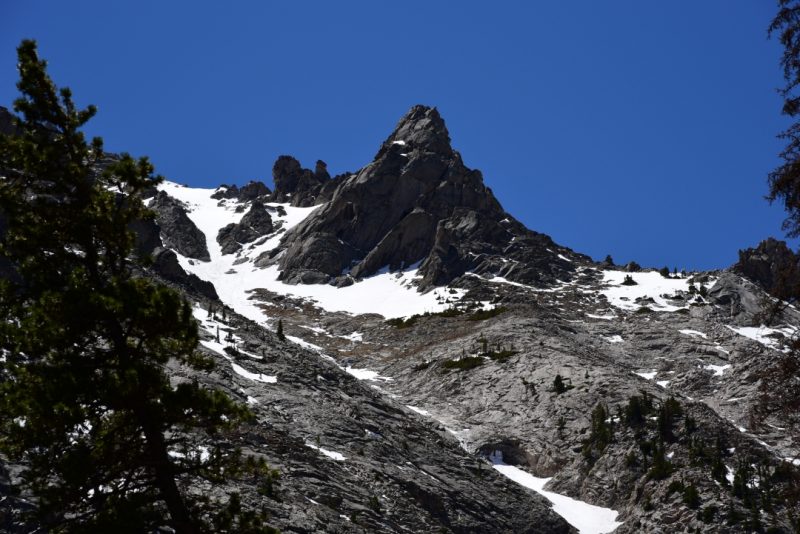 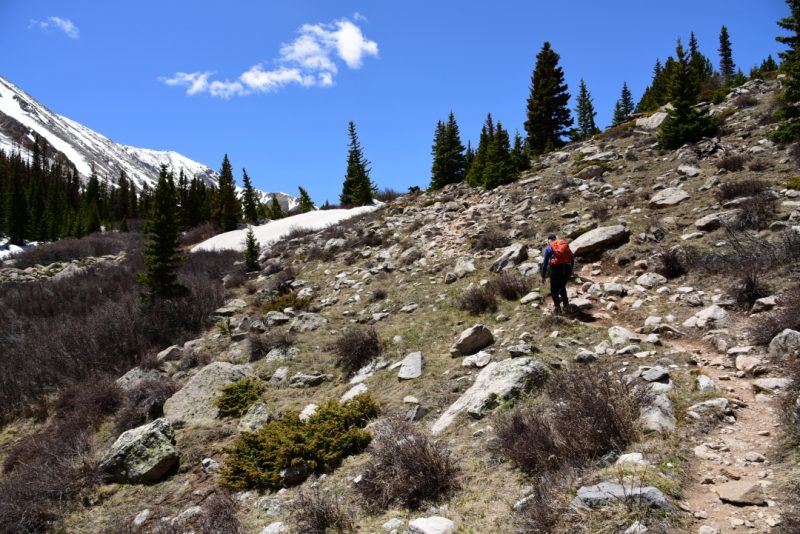 The final push to the lake is a steep boulder strewn path. We anxiously weaved through the rocky course, and just as we felt that we didn’t want to go any further,  Browns Lake appeared. We met the narrow lake at the east end where water spills over a log and branch beaver dam into Browns creek. The water was bright, clean and full from all the recent snow melt. We said hi to a few fisherman on the northern banks and relaxed for 30 minutes or so. Despite an elevation of 11,300 feet, temperatures remained relatively mild at the lake. A nap next to the calm waters was quite tempting. Nonetheless, it was approaching 2:00 pm, and our water supply was getting low. We begrudgingly packed up and began the over 6 mile descent to the truck. 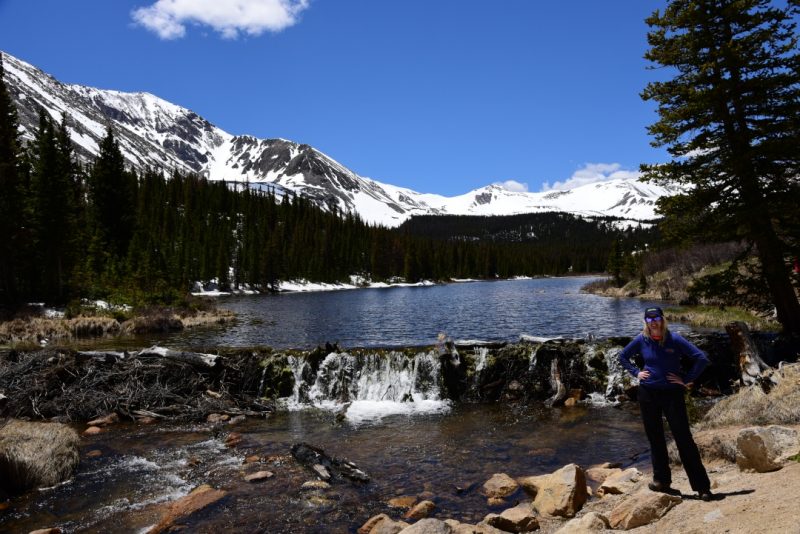 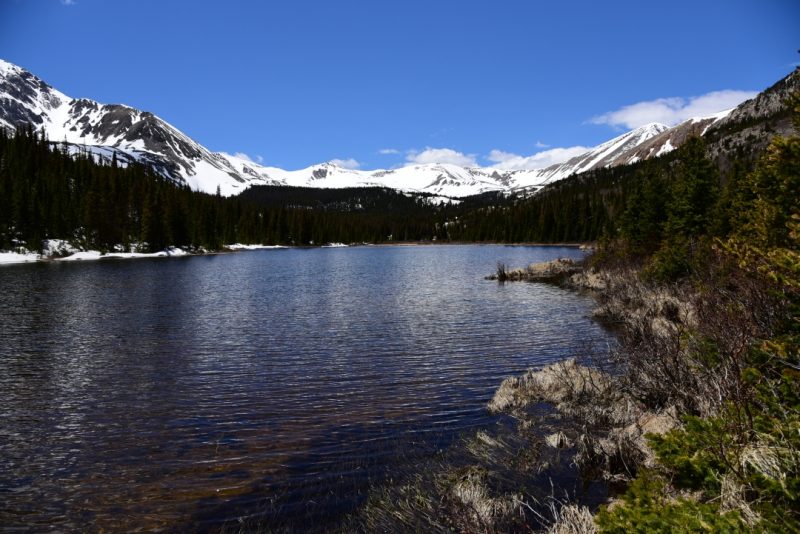 We made it back to the trailhead about 4:00 pm and headed into the wonderful little town of Salida to enjoy some food and drink and celebrate an almost half marathon hike in the Sawatch range. Despite lacking the glamour of a 14er summit, the Browns lake hike felt appropriate for the occasion. We were able to relax and enjoy each others company in our favorite place, the rocky mountains.

One thought on “Browns Creek Waterfall and Lake: Nathrop, CO”