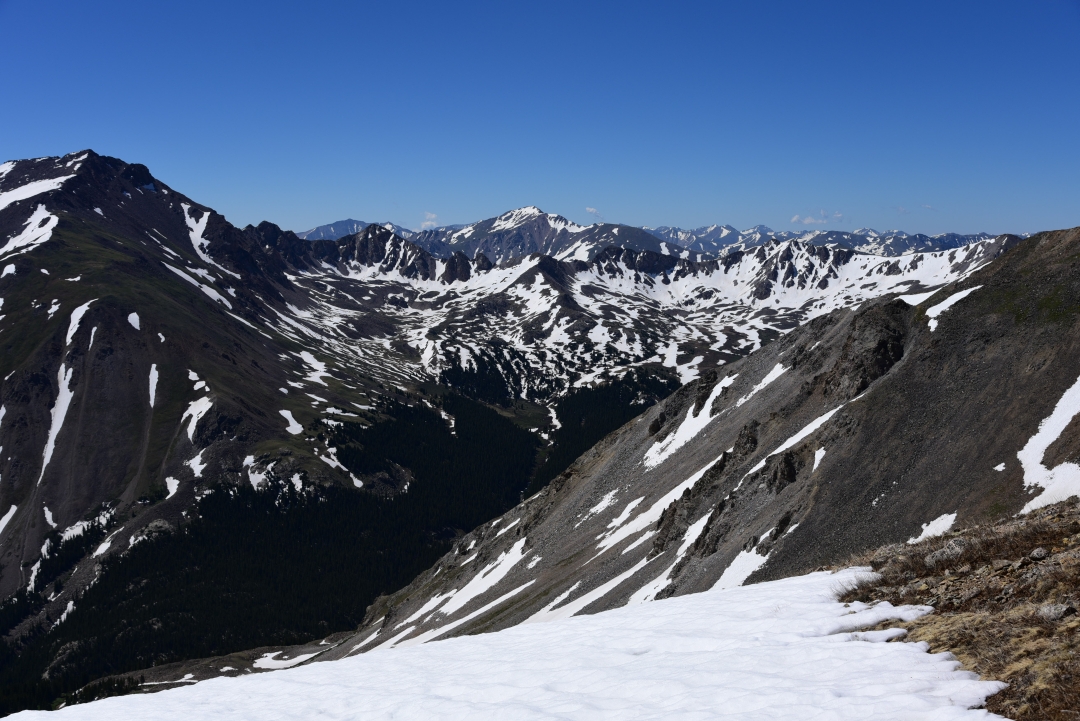 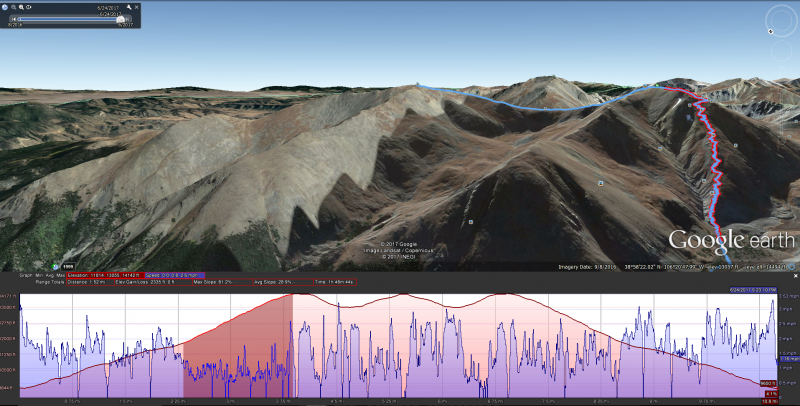 As the day began to settle into dusk, we reached our destination for this quiet June Friday night. The dimly lit Rodeway Inn sign tiredly welcomed us to rest a few hours. Like many summer and early fall evenings before, we left the night before our summit attempt to get closer to the trailhead for an alpine start. Though the Rodeway Inn was unassuming, it was clean and comfortable and gave us a bit more rest than our three season tent could have in the cold mountain air at 9,800 feet. Our goal for Saturday morning was to reach the summits of 14ers Mount Belford and Mount Oxford which are both accessible from the Missouri Gulch TH. In late summer of last year, we followed the gulch trail up and took the trail to Missouri Mountain instead of following it to the left towards Belford. This time, we planned to complete the trio of mountains. At 4:30 am, the alarm sounded in the dark, and we quickly grabbed our gear and headed out in the cool, dark early morning hours. Just as the sun began to softly illuminate the landscape, we pulled into the last parking spot at the TH, grabbed our packs, and began the steep ascent through the Missouri Gulch. 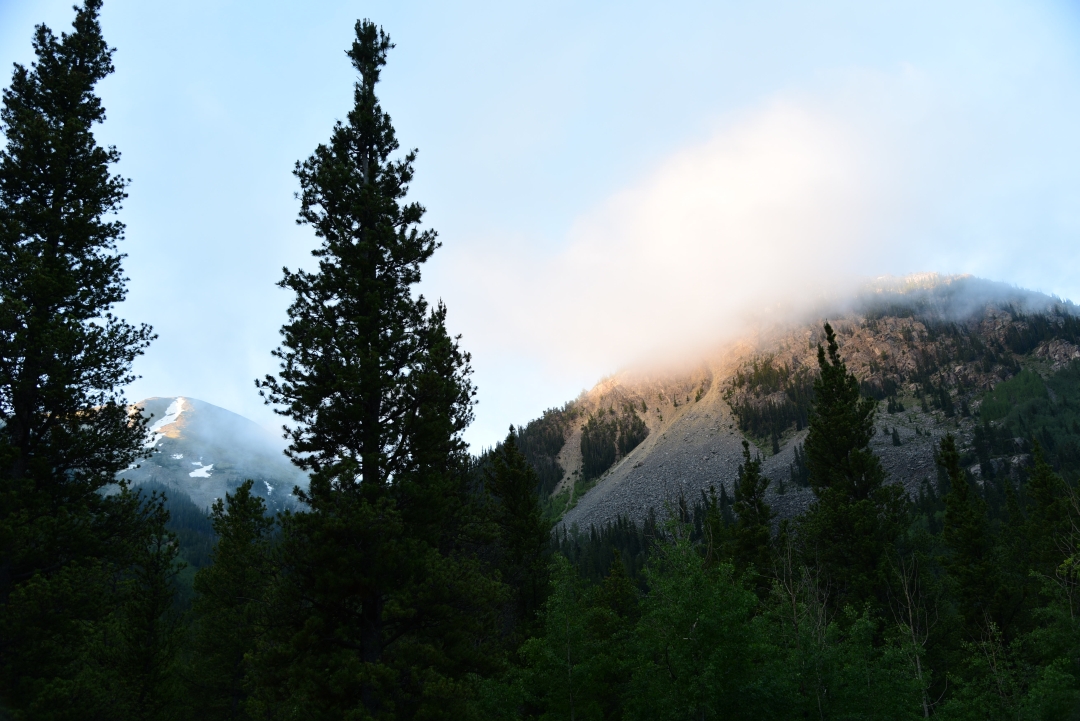 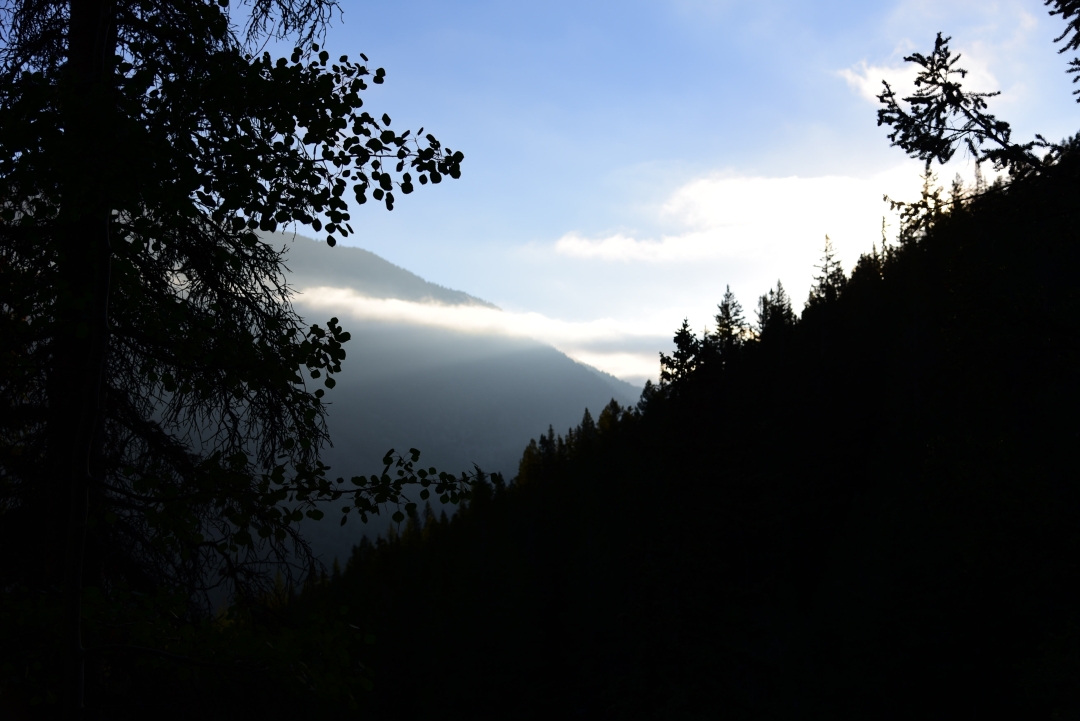 Oh how time cultivates our memories, often times erasing the bad and replacing it with only the fondness of our adventures. The climb through Missouri Gulch is steep and offers very few breaks from the relentless gain in altitude. Familiarity quickly flooded back, as we warmed our bodies in the cool morning air with all of our hard work. We reached the creek crossing rather quickly, but were a little surprised to see how high the water was and how unstable the log crossing appeared. Last September, all the snow had melted many weeks before, and the water was calm. Ever so carefully we balanced on the maze of floating timber until we safely reached the other side. A fall in the creek would have erased all of our summit hopes for the day. 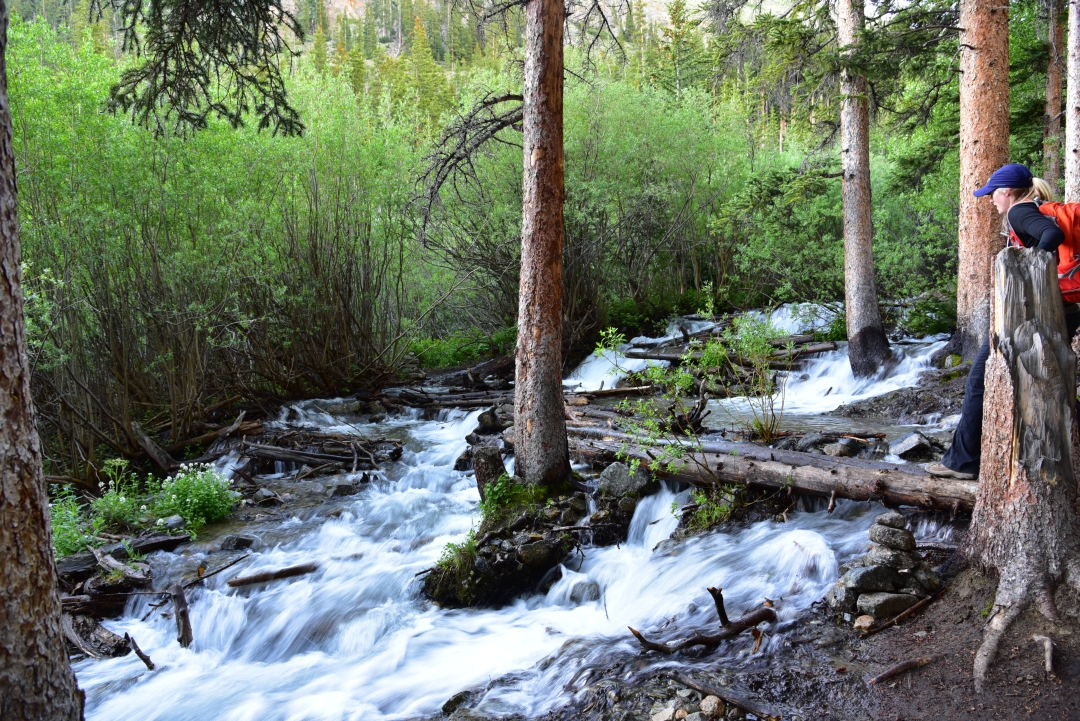 We made quick work of the trail at this point and stumbled upon the old log shack remnants just before our route opened up from the forest. We were now at about 11,300 feet, and we followed the trail along clear creek to the Belford/Elkhood pass trail junction. This portion of the route offers a nice break from the steep terrain and forest-dense switchbacks that we had spent the previous hour plodding up. The cool morning air and sounds of the nearby creek treated us spectacularly, and we reveled in the beauty of our surroundings. At the junction, we veered left towards Belford and saw the work that lay ahead of us. Checking our GPS, we realized that at the base of Belford’s northwest ridge we still had around 2,300 feet of elevation to gain in a mere 1.7 or so miles. We crossed a small creek and mentally prepped for the grueling ascent. We crossed several small, never-ending switchbacks on a primarily solid trail. There were however, several sections of steep scree that proved more difficult on the descent. At some points, the steepness of the route warranted rock stair steps to aid in the journey. Though tiring and difficult, we made decent time of our ascent up Mount Belford. Seen below is the final 2,300 feet to Belford’s summit and the beautiful Missouri Gulch. Note that the true summit of Belford is hidden in the photographs below. A tricky false summit dashed our spirits for a moment when we discovered its deceit. 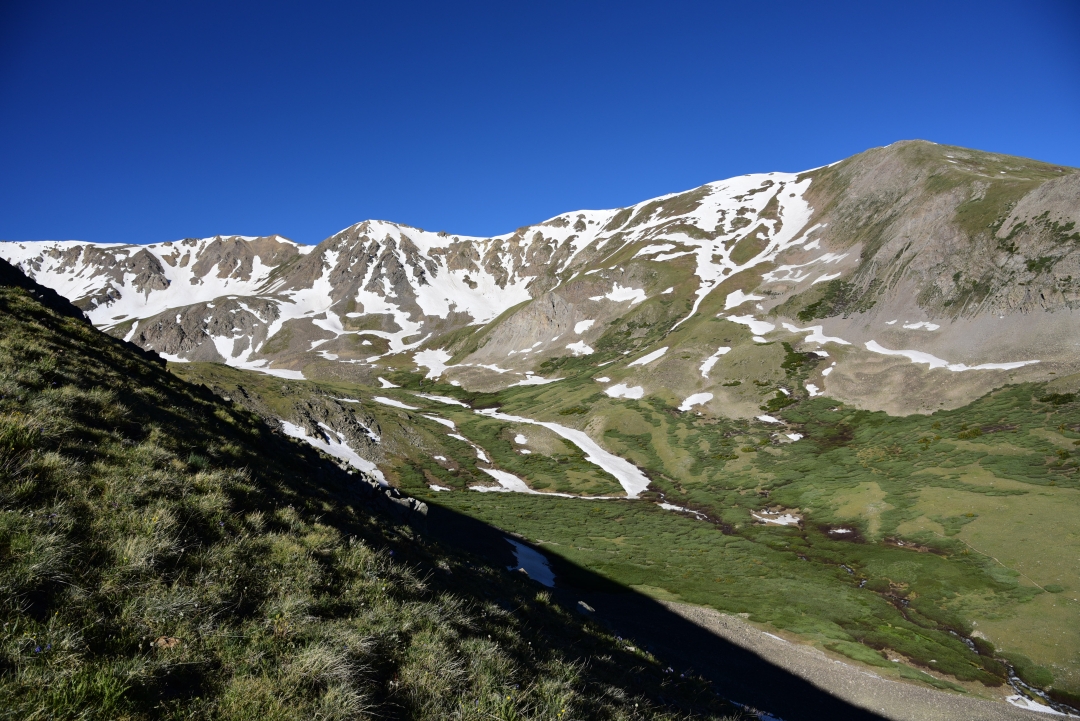 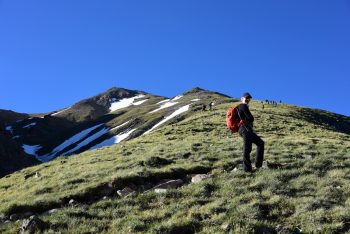 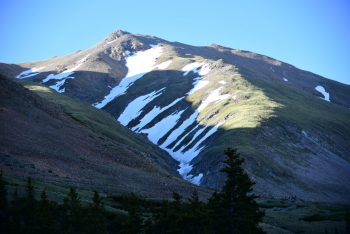 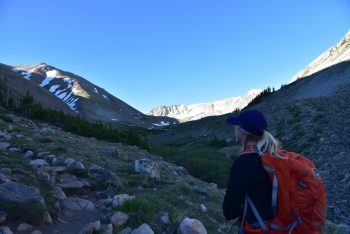 The summit block of Belford is comprised of an interesting sharp and jagged yellow/orange rock. The block isn’t too large, but provides room for a few climbing parties in close proximity. We relaxed on the summit for around 15 minutes, chatting with other climbing parties and identifying all the other 14ers in proximity. Missouri Mountain was still covered in snow, and Harvard looked brooding in the distance. We saw our next goal, the summit of Mount Oxford in the distance. We now began to realize the true magnitude of the elevation gain we had agreed to take on in this adventure. Just to reach Belford, we had already climbed 4,600 feet. Other climbers we were chatting with said that the second summit would give us a bit more gain..another 1200 feet…We had come all this way, and we were only 1.5 miles away. We had to give it a shot. Seen below are photos from the summit of Belford when we were still enjoying life and in high spirits. You can see the summit of Oxford and the seemly innocent trail to the summit. These photos do not reveal the steep descent that occurs from Belford to reach the saddle. 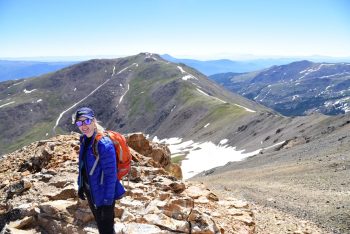 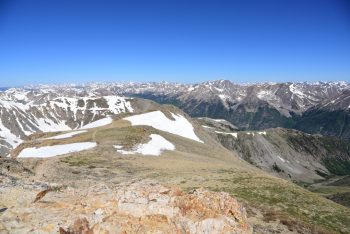 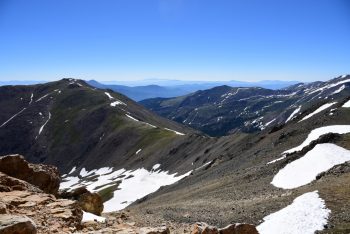 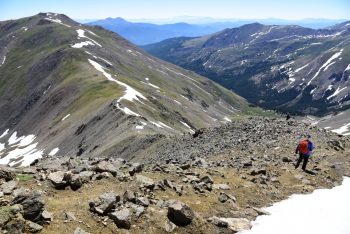 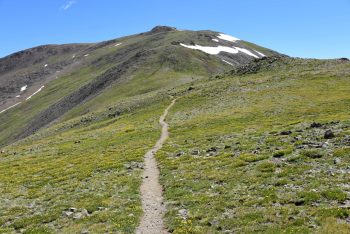 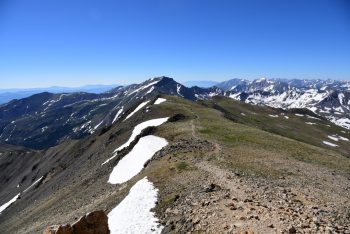 We began the descent to the saddle in high spirits but began to get nervous when we realized how much elevation we were losing to reach the saddle between the peaks. Further, there were several extremely steep scree laden sections to navigate. Nonetheless, the trail was easy to follow and began even somewhat pleasant as we reached the saddle and began to make our way up Mount Oxford. Despite this, we began to get really tired as we ascended our second peak. About half-way up Oxford, we paused before a short but deep snowfield to catch our breathe. After a 5 minute rest, we carefully navigated the small, steep snowfield and made it to the summit of Oxford relatively quickly. There were only two other climbers whom we shared the wide summit. Seen below are views from the trek to Mount Oxford and the perspective from the summit. 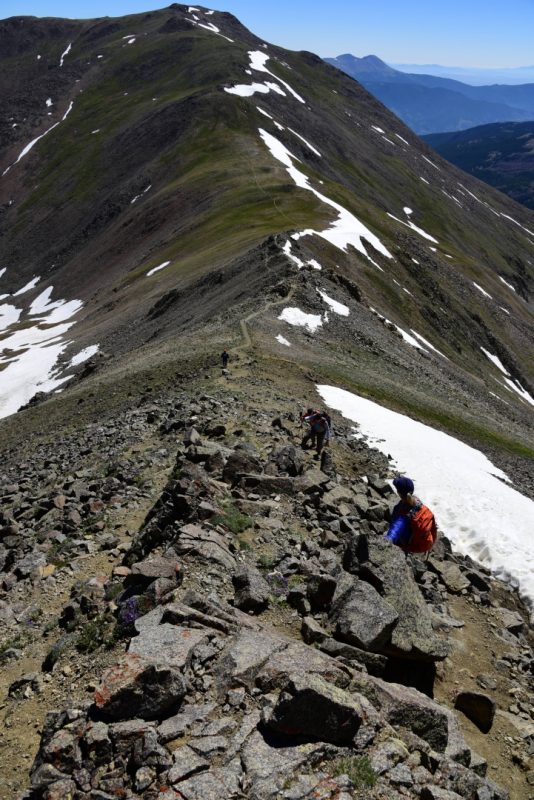 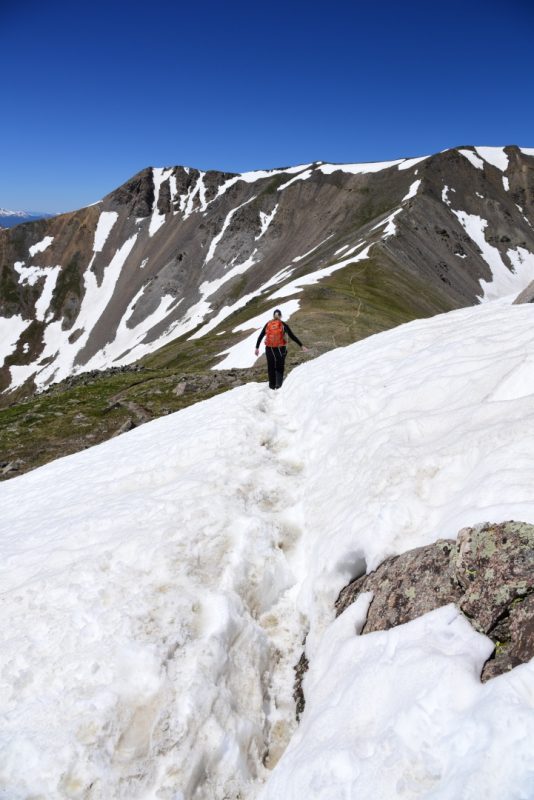 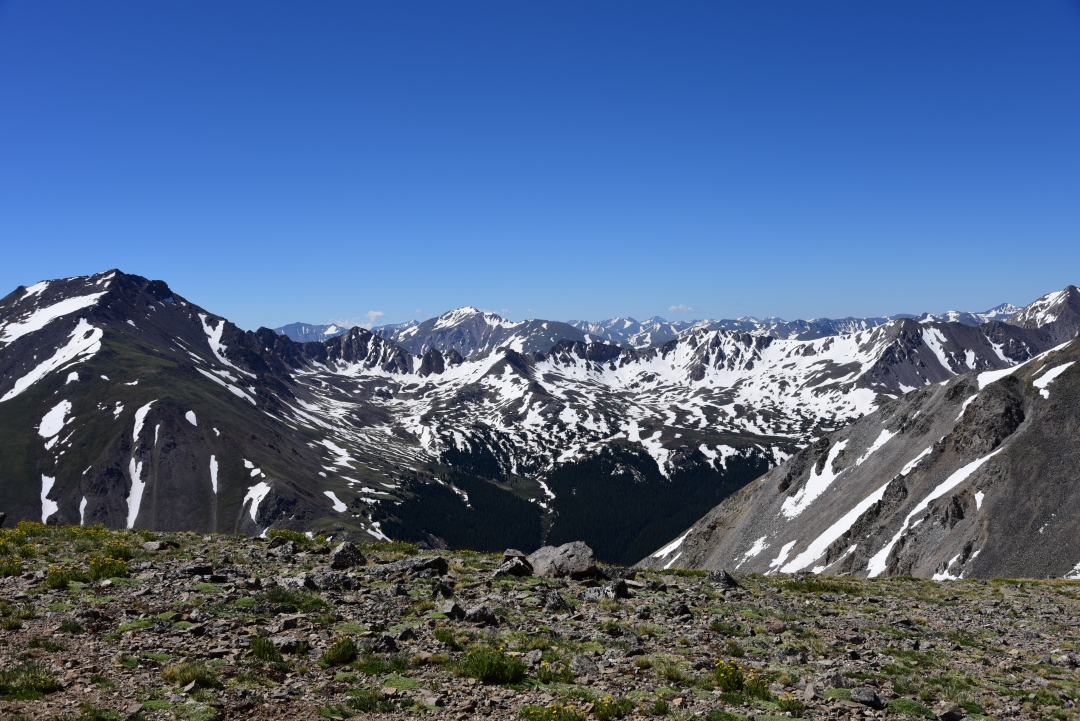 We rested for another 15 minutes on the summit of Oxford.  Though it felt like a major accomplishment to be sitting atop our second point above 14,000 feet for the day, we still had to get back up the steep ridge to Belford before we could truly begin our descent. We inhaled water and trailmix, letting the energy creep back in before we turned back. The sky still remained a perfect blue with naught a cloud in sight at noon, so we felt comfortable taking our time in the return. The start back up to Belford begins gradually and gave us a brief moment of confidence. The last 300 feet were brutal, but at least the array of alpine flora kept our eyes from focusing too much on the vertical path. We were thrilled upon reaching the ridge and short stretch back to Belford. After sitting on Belford for the second time that day, we realized that we had gained about 5,800 feet of elevation. Though we knew it would be a long trek for the day, somehow that number escaped us when we were researching this climb. Seen below are photographs looking back at the path back to the summit of Belford from Oxford and from the Summit of Belford looking back towards the gulch. 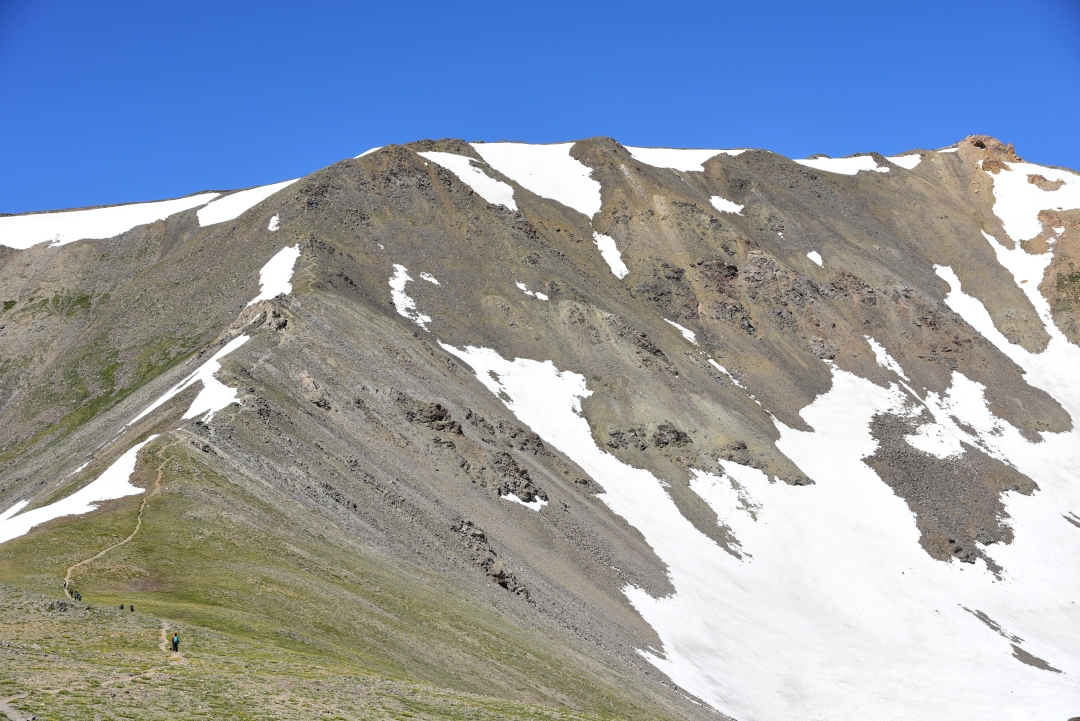 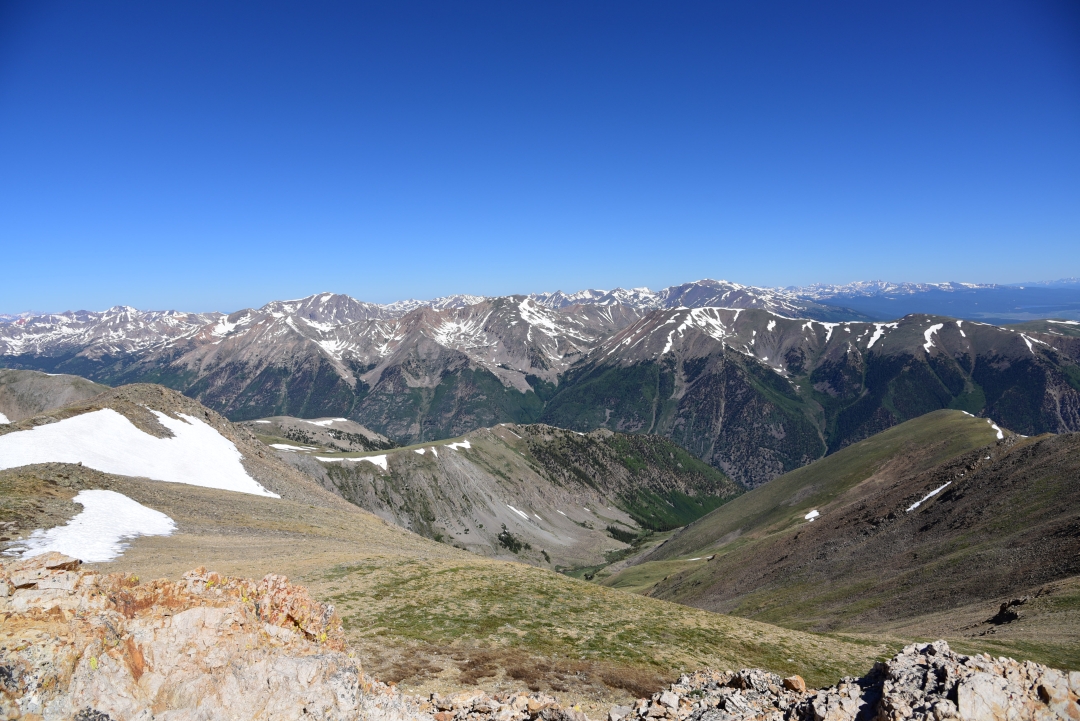 As we descended around 1:00 pm, there were several more hiking parties coming up late, enjoying this rare perfect summer weather day. At this point, we were exhausted to the point where gatoraide, trail mix, and water were doing little to nothing to improve our energy levels or morale. Though the descent was easier with respect to cardio, our leg muscles were shaking with fatigue as we navigated the steep scree trail back to the valley. The sun was high in the sky now, and it was quite warm. Despite being  in this sublime place, we were really ready to reach the trailhead and our truck. Interestingly, the trek down seemed much longer than the trek up.  We couldn’t believe that we had climbed all of this in the morning. At least, we were afforded a few, new spectacular views on our descent that can be seen below. 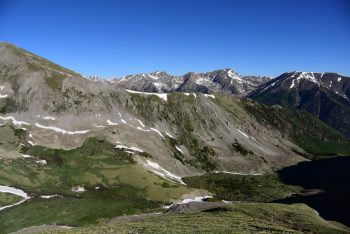 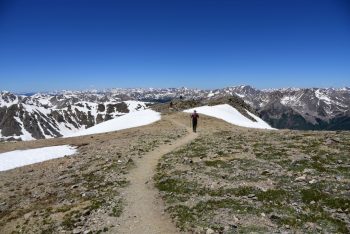 We were grateful for the forest canopy when we reached the Clear Creek crossing. It was nice to be shielded from the intensity of the sun. We were now on a mission to get off the mountain and back to the car. The camera went back in the pack, and we made very quick descent through the seemingly endless switchbacks through the forest. When we heard the familiar roar of the white water of the river crossing and bridge, we were so ecstatic. We were back at the TH! We drove a short while down the road to the Clear Creek reservoir and dipped our feet in the freezing cold water. A weight was lifted from our minds and bodies as we relaxed for a few moments before the drive back to Denver. We had successfully reached the summits of our 18th and 19th Colorado fourteeners, the first of this season. But who’s counting anyway.