The cool evenings and brisk winds of fall brought us crunchy leaves beneath our feet and colors of brown and beige, but the snows we are so accustomed to this time of year in the high country are lacking and have left us unseasonably warm. Scant snowfall in many regions of the high country this year has extended summer/fall hiking conditions, and a trip to Rocky Mountain National Park was no exception. With no snow for our skis, we threw our hiking boots on once again and drove to Wild Basin, a gem in the vast expanse of the park.  After a long, late morning drive, we arrived at the park. The entrance to the park and ranger station is approximately 20 miles from Lyons, CO on Hwy 7, and as a word of caution, there is very limited to zero cell service on this drive and throughout most of the hike. While this is a relatively nice opportunity to cleanse the soul from the distractions of politics, email, etc., it doesn’t help with worried family members waiting for a check in call. As we approached the entrance booth, there was no ranger on duty and a simple sign which read “please proceed.”  We happily obliged and followed the summer narrow, dirt road all the way to the summer parking lot. On a typical summer weekend, there is absolutely no parking in this relatively small lot after 8:00 am, thus we were thrilled to have the opportunity to choose a space on this fall return trip. The hike to Bluebird lake follows the same path that leads to Copeland Falls, Calypso cascades, Ouzel Falls and Ouzel Lake that we visited on a few earlier trips. As you can imagine, there are several attractions to distract from the altitude gain along the way. Seen below are photos from the first few miles of our trip including Calypso Cascades, as well as information on ease and distance to each point of interest. 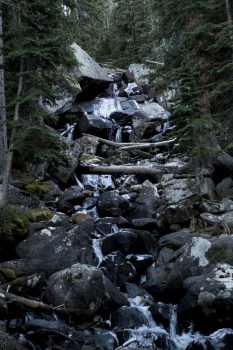 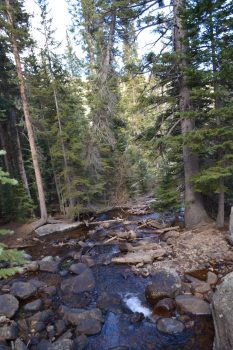 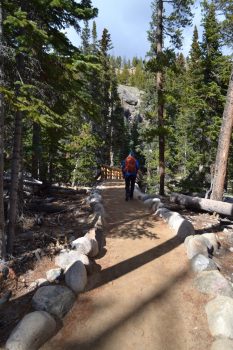 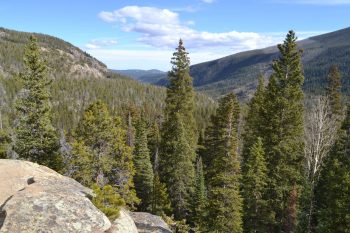 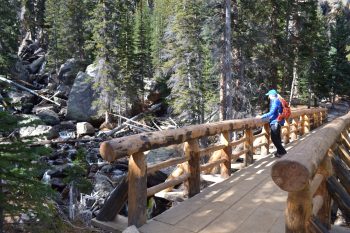 After a brisk 2.7 miles, we arrived at the bridge at Ouzel Falls (about 9,300 ft). We visited this amazing waterfall back in 2013, but due to the massive floods later that year, the bridge washed out and wasn’t repaired until late last year. Without a bridge crossing, it was difficult to return safely and prevented us from easily accessing additional terrain from this portion of the park. We were extremely excited for the ability to once again access this trail system without a slog through a social/camp site trail in dense forest for two miles that was previously necessary. Fall hikers were in abundance until we reached Ouzel Falls. We essentially had the trail to ourselves once we passed the bridge and approached the first section of significant elevation gain. Another half mile of hiking led us to the remains of the Ouzel Fire of 1978, a result of lightening that was at first, allowed a controlled burn. Unfortunately, high winds spread the fire and demolished over 1000 acres before they were able to contain the fire. Though fire remains would seem to be an unattractive view to a hiker, it was quite the contrary. We hiked on a wide, open ridge that allowed spectacular views of Mount Meeker and Longs Peak sneaking through a dense layer of fog. 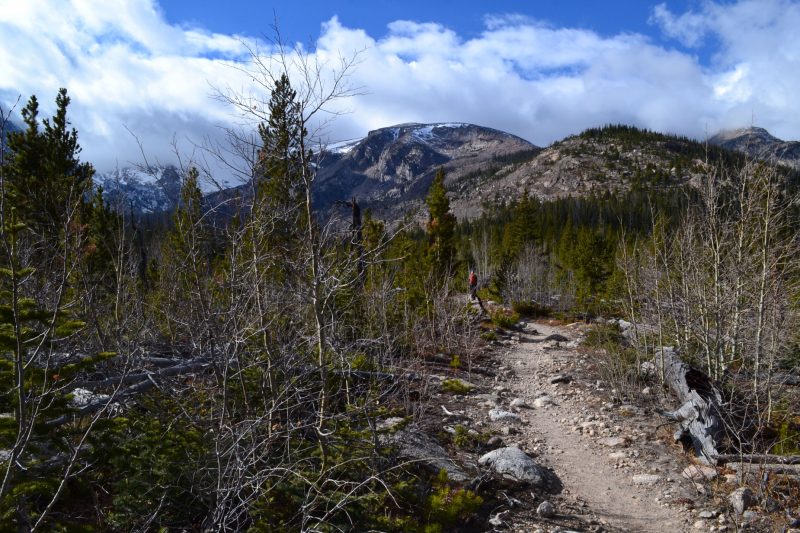 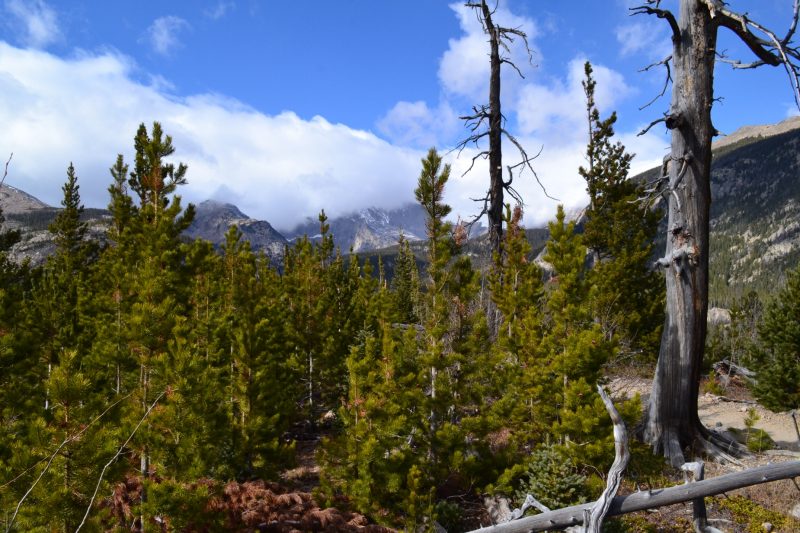 After another 1.8 miles, we reached a sign for the turnoff for either Ouzel Lake or Bluebird Lake. Another easy 0.5 miles would send us to the gentle banks of Ouzel Lake. Or, we could continue onward to the cold, higher elevated shores of Bluebird. Since we had made such great time on the hike thus far, we opted to continue the remaining two miles to the lake. The trail became a little less refined at this junction. It narrowed and passed in and around rocky outcroppings. We were able to look to our left shortly after the trail split and see Ouzel Lake below us. As we continued, the trail continued to gain elevation, and the wind picked up speed. It appeared as if snow was encroaching on our destination. Seen below are photos of Ouzel lake and the first mile to Bluebird. 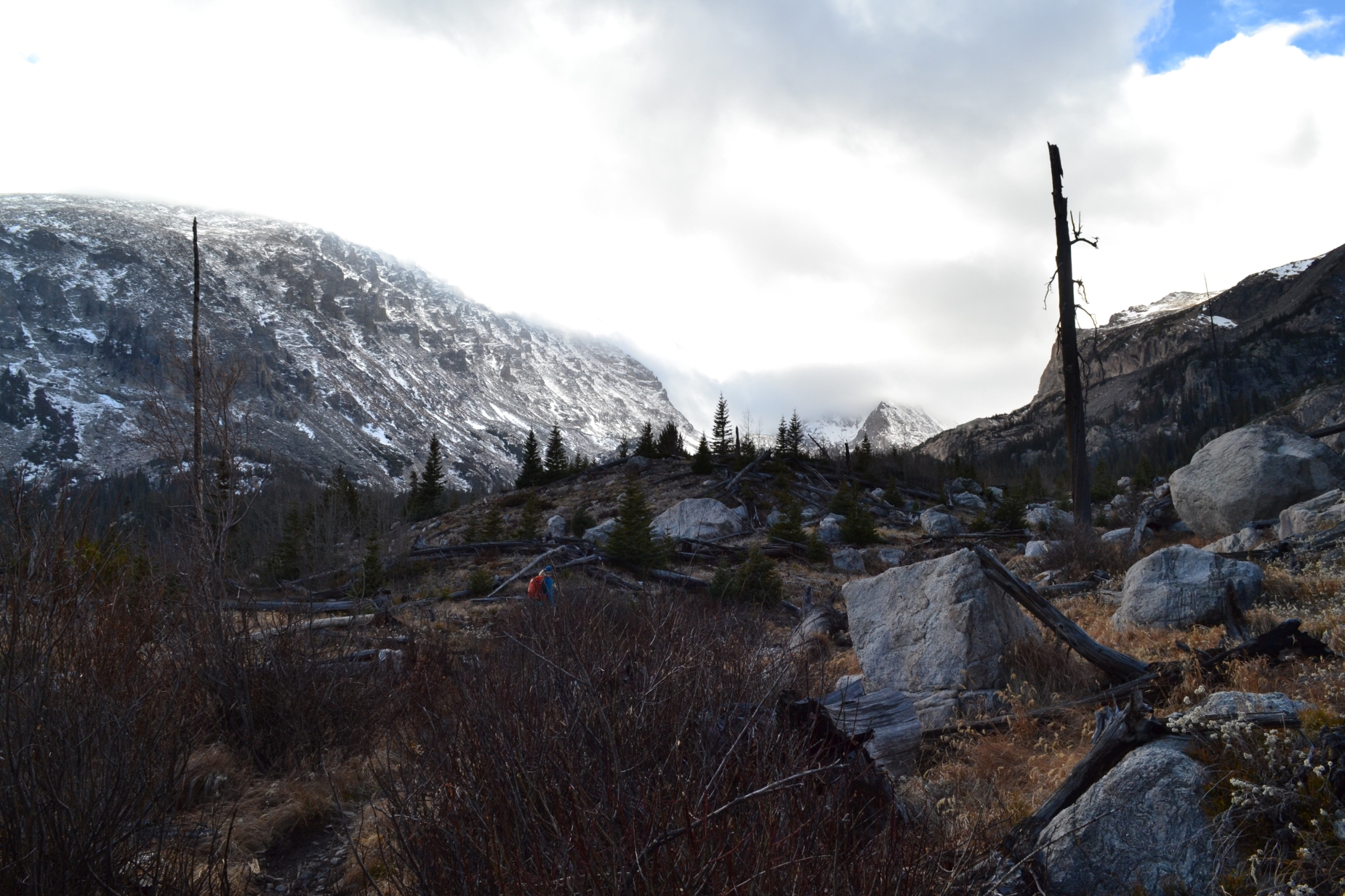 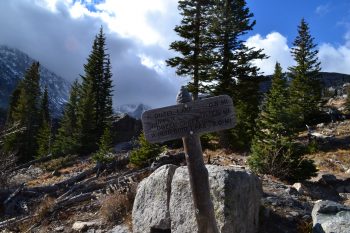 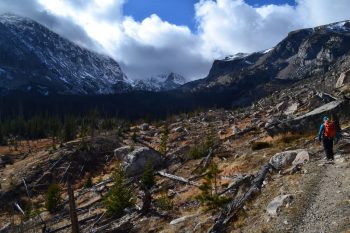 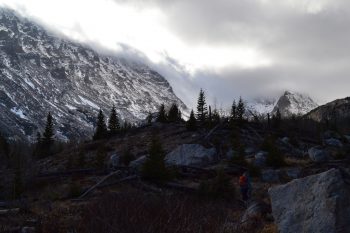 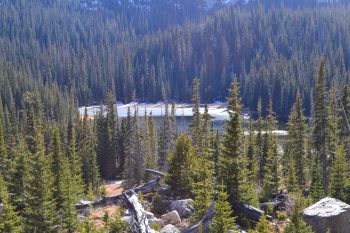 With approximately a mile remaining to the lake, we saw our first glimpses of ice and snow. The trail weaved in and out of small patches that were, at first, easily avoidable. At one point, we crossed a short plank bridge across a creek. Beware of the very large nails that are sticking out on several portions of this bridge. If we weren’t paying attention, we could have easily tripped. The wind continued to pick up, and the temperatures dropped as we gained elevation, and we opted to layer up. The trail turned to steep, icy rock as we approached the last quarter mile to the lake. There were several spots where large sheets of ice covered the rock steps and boulders of our route, greatly slowing down our travel. Nonetheless, we were happy to finally be greeted with the the first signs of winter. 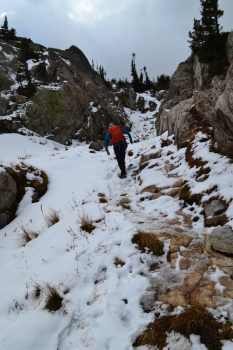 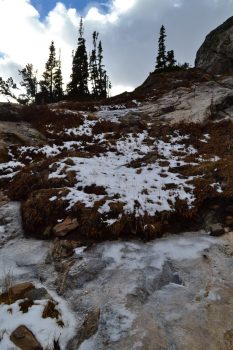 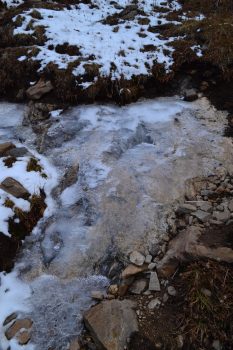 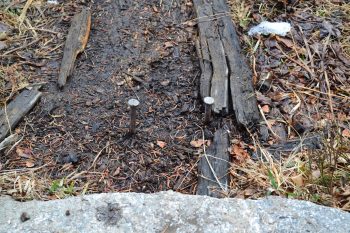 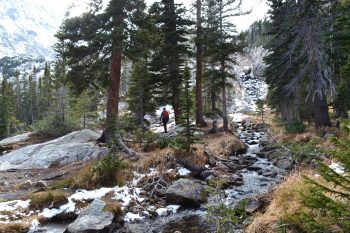 After a final push up a steep snow-covered path, we reached our destination. Bluebird lake was before us, half-covered in a newly developed sheet of thin ice. The remaining unfrozen portion of the lake was a deep, dark ocean blue, which appeared even darker with the thick white clouds surrounding it. The view truly was exquisite but the wind was extremely intense, and the temperatures were now below freezing. We took shelter in a rock formation but the powerful winds still pounded us. We were too cold to unwrap our sandwiches and had to forego the prospect of a satisfying lunch for the moment.  For a few minutes, we had the lake completely to ourselves. A lone photographer later approached her banks. Generally the willingness to immerse oneself in fall/winter conditions at higher elevations will be rewarded with solitude. We only stayed a short time at the lake to capture a few images as the harsh conditions kept us from reaping a larger hiking reward this day. 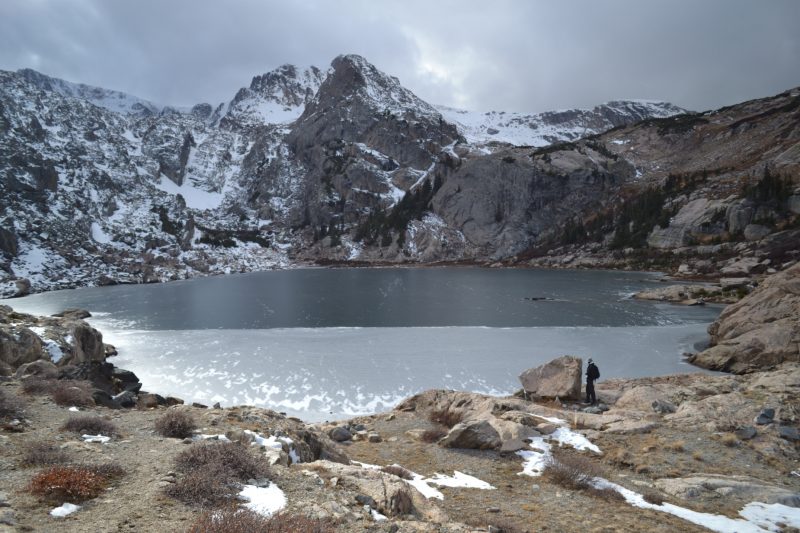 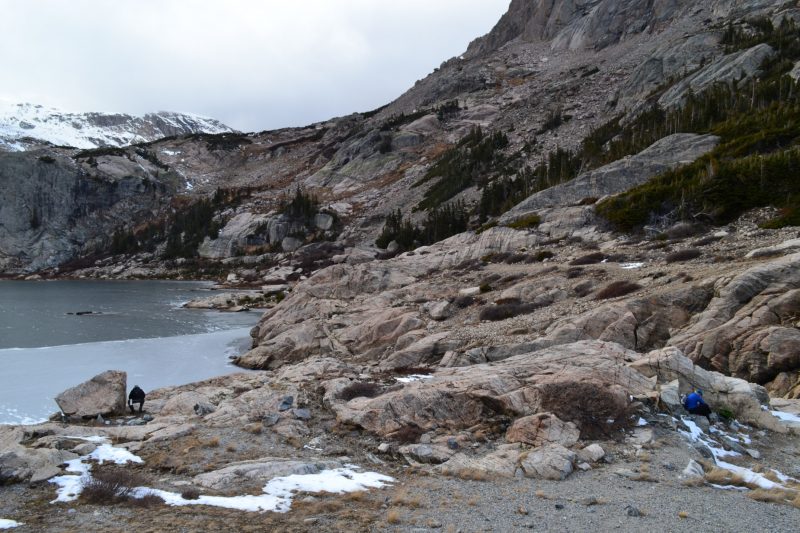 We put on microspikes for the descent and proceeded carefully down the snow covered rock and trail. After descending close to Ouzel Lake, we finally took a break and had our lunch. Though it was only around 3:30 pm, we anxiously inhaled our calories and kept moving. Daylight’s savings time had just ended, and there were only a few short moments left of sunlight to guide us for the remainder of the hike out. At approximately 5:00 pm, just as the sun faded behind the trees and hills, we reached the familiar foot bridge and trailhead sign signaling the end of our journey. Though reaching Bluebird Lake took a lot of energy and miles in the mountains, it was a rewarding hike and one of the more aesthetically pleasing lakes to visit in Rocky Mountain National Park.
Tweet