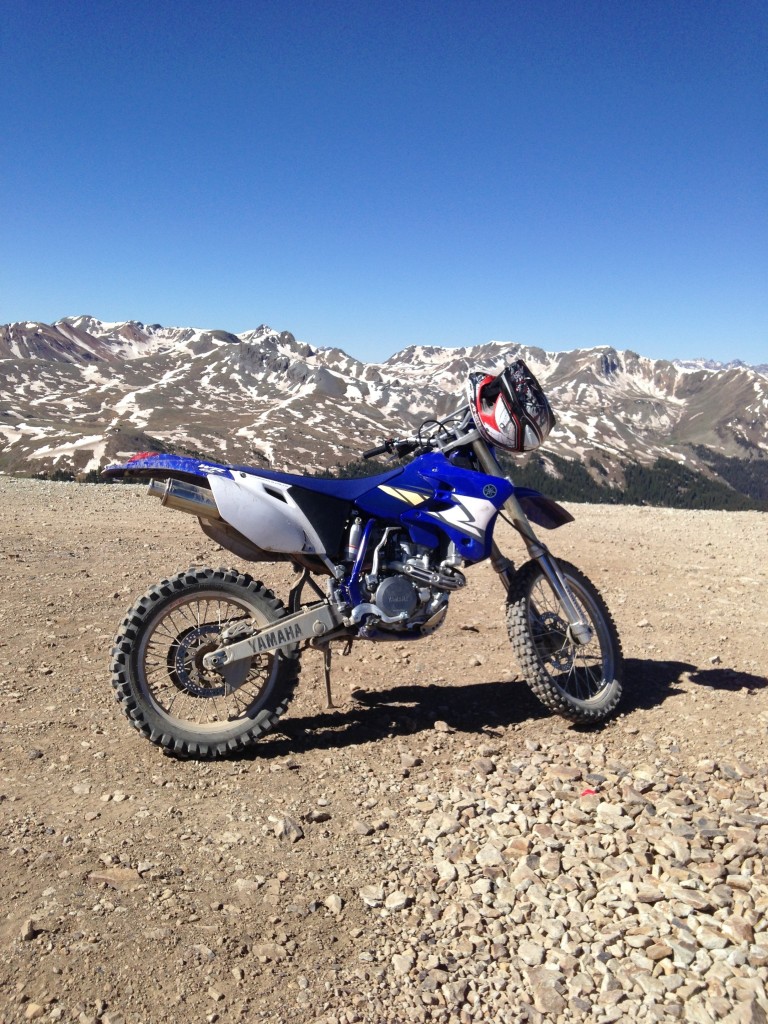 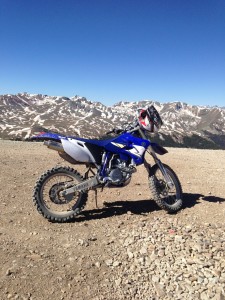 Today, we are pleased to share a guest post from Will Sandifer about his recent trek into the miles and miles of dirt bike and jeep trails that run through the remote (maybe more crowded these days) backcountry of the San Juan Mountains near Durango, CO. Though we were not with him on this fantastic trip, we couldn’t resist not sharing a few of his photos and report from the journey. 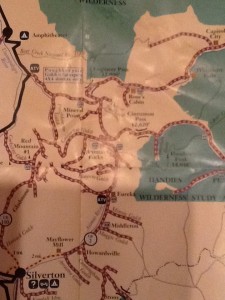 My dad and I set out early Sat. morning and drove straight into Silverton from Denver. We got into town and went to the Triangle Motel which was located underneath a gas station. It was rugged, but gave us a good night’s rest.   Later, as a trial run, we headed down to the Animas River (also known as the river of the lost souls…just asked my dad..) and rode the dirt bike around several local trails. The long drive plus our added mileage on the bike led us to crash pretty early that night. The next morning, after a couple of shots of caffeine chased down with a little whiskey we headed out into the mountains. To make a long story short, in Denver we had a bit of trouble getting one of the dirt bikes running and functional, so dad opted to rent a jeep in lieu of riding a potential broken bike into miles of wilderness. We then headed to Animas Forks. The Forks is a ghost town about 12 miles northeast of Silverton. It’s an old mining town that declined in the early 1900s. Though non-functional today, it leaves behind many old log cabins and buildings to explore. In a way, the ruins of the old town were a grim reminder of changing economies and risks of investments. It’s one of the more interesting sites along the famous Alpine Loop (infamous set of dirt roads connecting Ouray and Silverton). Seen below are me at some of the ruins. 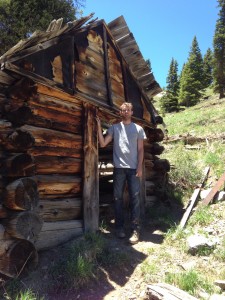 We then headed straight up to the 12,930 ft. California Pass, the highest pass in the area. Since it was early June during the trip, it was pretty tough going due to the large amount of ice and snow still present this early in the season. The compacted ice and snow resulted in making the trail a single track and completely eliminated any turnarounds until the top. We considered ourselves very lucky not to have met anyone on the way up. Once we reached the top we were able to chill for a while and take some pictures. Unfortunately, coming down didn’t work out so well. As we descended the narrow trail, we encountered a few people trying to climb the trail which caused a few problems. I had quite a rough time at this point and proceeded to flip off of a “relatively” small waterfall on the bike to avoid some little kid on a 4-wheeler. Seen below are some of the photos at California Pass, before I was assaulted by a 4-wheelin 12 year old. Seen below is me atop California Pass. 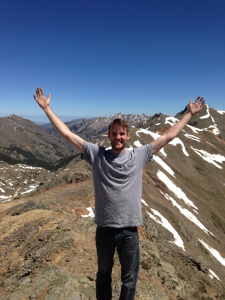 After ensuring that all of my bones were intact we finally made it back to the Forks. We then met a park ranger here wanting to see our OHV permit. At first he was all business, but kindness blew through him like a shotgun through a brown paper bag after we showed that damn permit, and we were then directed and well on our way to another pretty sweet riding site; Picayune Gulch. Picayune Gulch covers about 7 miles of trail which leads you around two deep, dramatic gulches. The trail leads high above timberlines at times and forced us to go through several 300 yard stretches of very steep trail. Tricky boulders and sheer cliffs were a problem for the dirt bike as well as the jeep, which narrowly threaded the passes. I will honestly say it was a little touch and go at times here. The technical difficulty of the terrain forced me to stay third gear pinned for most of the ascents since slowing down or stopping was a no go. Dad in the jeep could barely fit the 8 foot passages. When we finally made it to the top of the gulch, we stumbled upon a ton of old mining buildings. We thoroughly explored the town and could almost feel the weight of the ghosts of men….men that were as hard as the pick axes that they swung those many years ago (hehe). We also discovered many temporary lakes around 11,000 feet on these trails which formed from melting snowfields and mountains in the vicinity. The water was completely clear and pure, and showed our reflections, covered with dirt, mud and the burn of the wind from riding. At the lake, we also had a view of 5 different mountain ranges. It was breathtaking. Seen below is one of the many lakes near the area and a gold panning building. 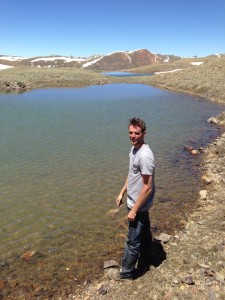 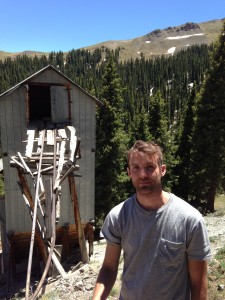 Lastly, we headed to Engineers Pass. This was truly the most harrowing part of the trip. Thick slabs of ice walls lined one side of the narrow trail, the other was simply a drop off into thin air at times. The switchbacks were treacherous. Once we reached the pass, we enjoyed our view at the top of the world for a while and then called the day and headed back into town. Overall we went about 120 miles passing in and out of the many trails that circulate the San Juan Range. A picture of the jeep and me on Engineer’s pass can be seen below. 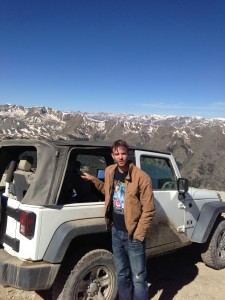 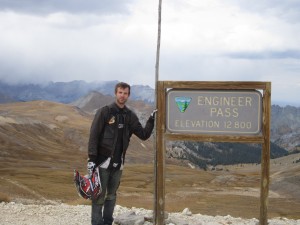 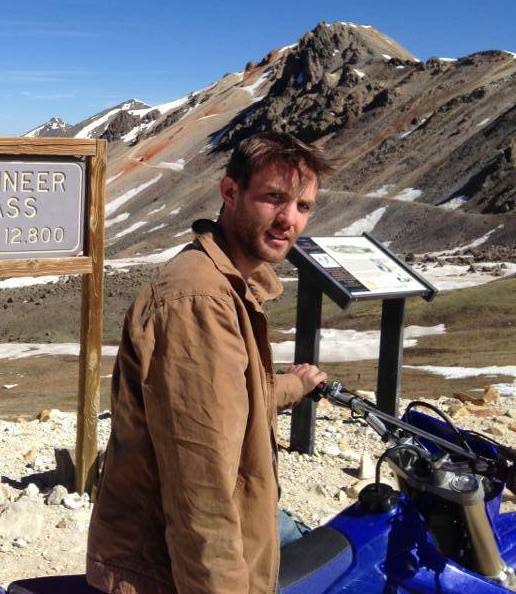 We concluded our trip by heading back into Durango for a little chicken fried steak, whiskey and reflection. A trip to Durango in our family is not complete without a ride on the D&SNGR to Silverton. The train holds many special memories for the Sandifer clan and has become tradition. The trip on the train is like a nostaglic ride back in time. As I rode the train, I thought of my grandfather and my dad as a kid and their adventures and how I was reliving these same awesome moments now. Our trips to the Animas, through the mountains and rocks and trails; they are the same now as they were then.  It’s kind of like Norman Maclean said in a River Runs Through It….

“Eventually, all things merge into one, and a river runs through it. The river was cut by the world’s great flood and runs over rocks from the basement of time. On some of the rocks are timeless raindrops. Under the rocks are the words, and some of the words are theirs. I am haunted by waters.” – Normal Maclean

Overall, I highly recommend checking these trails out. I hope it means as much to you as it did to me.

2 thoughts on “Jeeping and dirt biking the San Juan Mountains: Silverton and Durango”