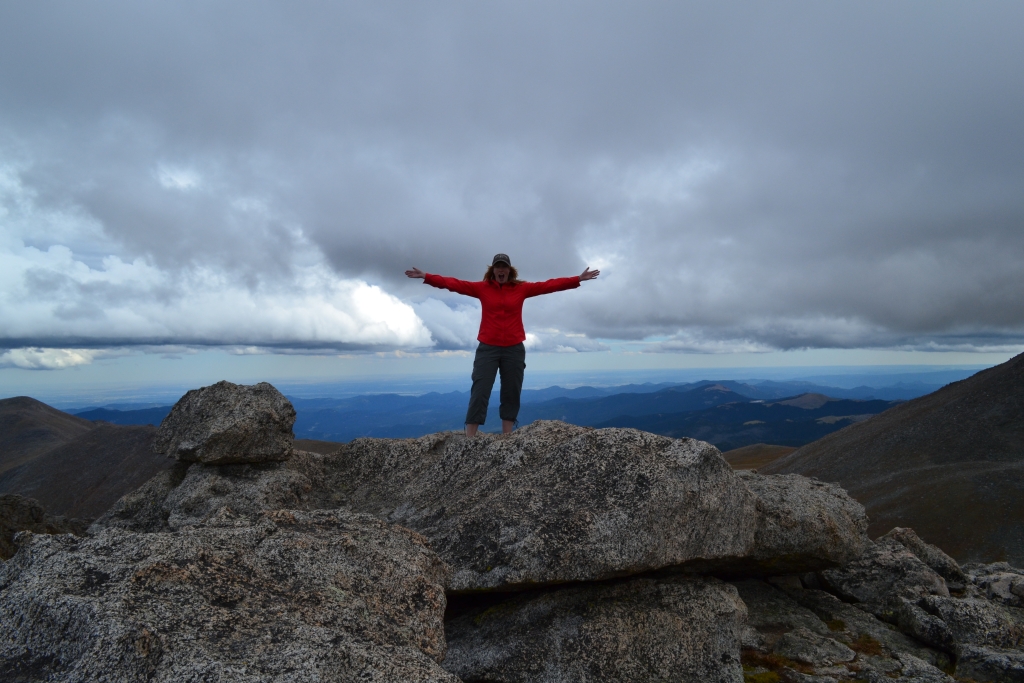 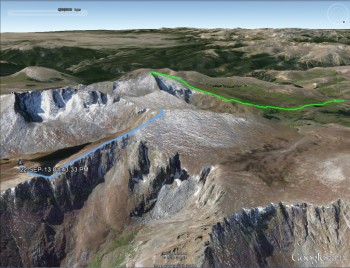 This weekend was quite an adventure. Our friends Catherine and Steve were married and their wedding was in Pine, Colorado, which is just outside of Evergreen. Well, we noticed that Mount Evans was near the venue and decided we’d stop by on our way out, however, due to weather, we were only able to summit Mt. Spalding. Our GPS map (above) from Google Earth shows in blue our hike up Mt. Spalding and the green was our hike up Bierstadt. It made for a very cool GPS map.

As usual the weather was an issue today. On our way out to Mt. Evans we could see dark clouds in the sky and had a feeling that they might put a damper on our day. But Mt. Evans boasts the highest elevation automobile road in the country. You can literally drive almost to the peak; the parking lot is at 14,130′ (4,307 m) and the summit is at 14,264 ft. The fee to use the road is $10 for 1-12 individuals (per vehicle). The road is about 15 miles long and the last 5 miles of road are closed after Labor Day. The road is closed for the season after the first “significant snowfall” or after the first weekend in October. So this drive is best done in the summer months.

Since it was after Labor Day the road wasn’t open to the top.  Also due to this fact the fee was half-price for us ($5). We were a little disappointed that the last 5 miles were closed and that we couldn’t drive to the top, but we still wanted to drive up to Summit Lake, which is at around mile 10 of the drive, and look around.  It was chilly at the base of the drive, 45 degrees Fahrenheit according to the thermometer, with a wet snow falling. As we drove up we saw quite a few angles of the Mount Evans Wilderness as well as a number of peaks which can be accessed from the road. Some of those include Mt. Warren, Rogers Peak, Goliath Peak, and further away Gray Wolf Mountain and Epaulet Mountain (most of which are 13ers). There was a light rain/snow driving up, but we did manage to get a few pictures of the drive. 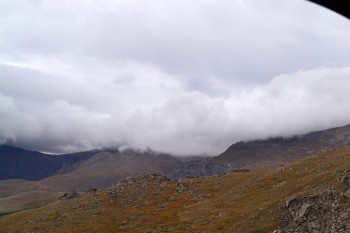 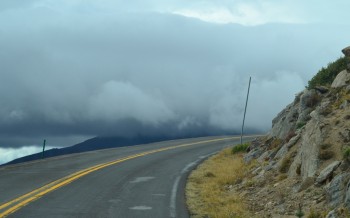 After about 10 miles we were forced to enter the Summit Lake parking lot. We drove in and were greeted with some sleet. It was cold and at first we decided we would just go over to the lake, look around, and leave. But then fate intervened. As we wandered over to the lake and the lookout area we saw a bighorn sheep. He looked at us and then walked away behind the ridge-line. We both really wanted to get a picture of him and thus we plodded up the path to try and see if we could still see him. At the ridge we saw two sheep staring back at us, as if saying, “Hey, we live here. Quit being wimps and hike around.” At about that time the wind let up, the sun started to come out, and it felt pretty good. So we decided to try and see if we could make the Mt. Spalding summit, a 13er on the way to Mt. Evans. Below is the bighorn sheep who inspired us. 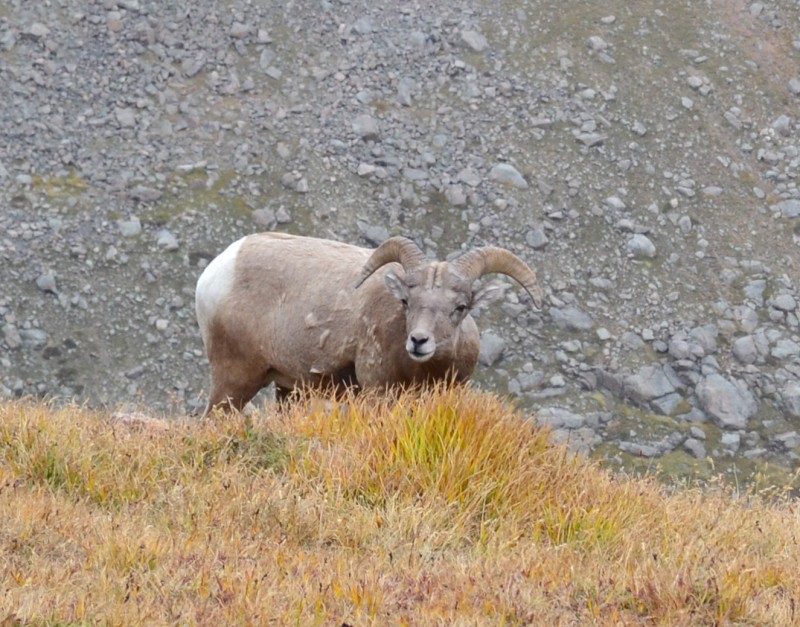 As we continued up the Mt. Evans trail it became a beautiful afternoon. The sky was extraordinarily blue, the light was perfect, and we felt great. It is a rocky hike, with some mild scrambling at times; but with good hiking boots it is only a mild challenge. As we made our way up we were treated to some amazing views of the Chicago Lakes and Summit Lake. Gray Wolf Mountain and Mount Warren were both visible to the north and we had a great view of the north face of Mount Evans the entire way up. Below is a block of pictures from this gorgeous segment of our hike. 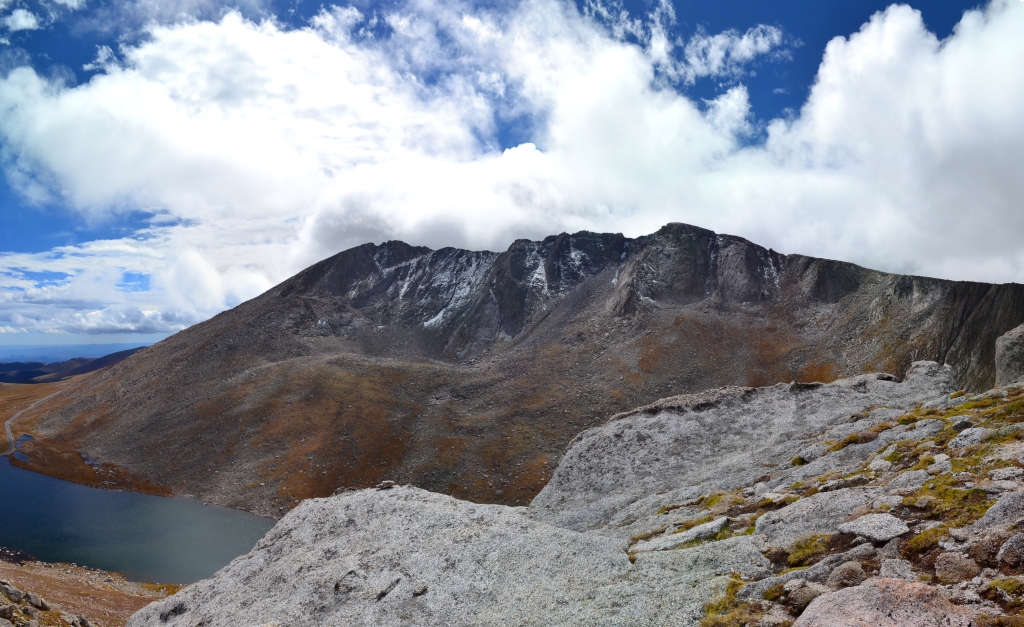 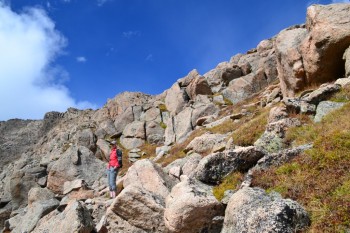 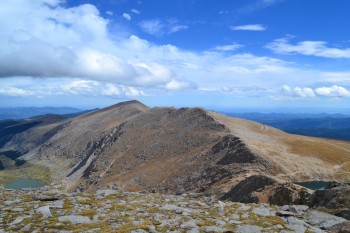 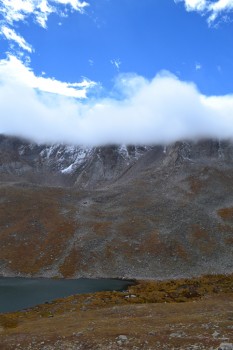 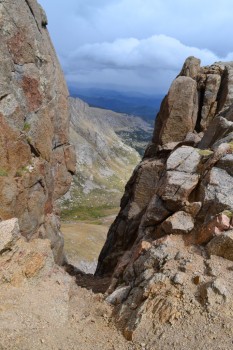 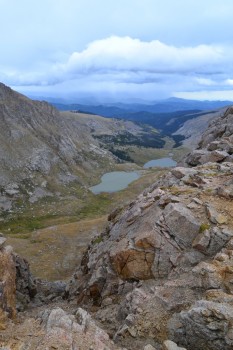 After a little bit of looking around and talking to a few other friendly hikers we were able to see the summit. It was a pretty neat sight. In the forefront was the summit of Mount Spalding (13,827 ft.), behind it we could see the the ridge of the Sawtooth, which led further back to Mt. Bierstadt (14,060 ft.), and then to the left we could see Mount Evans (14,260 ft.). Below us was Summit Lake, in which we could see ripples gently forming as the wind blew through the valley floor below. Below are a couple shots from this vantage point, with the first shot (left) fitting the above description. 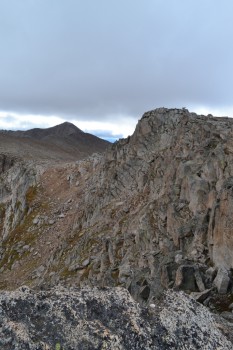 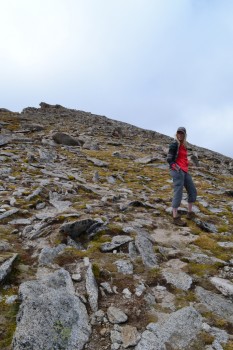 It was a quick walk up to the summit after taking the pictures above.  While on the summit of Mount Spalding we noticed that the sun was going away behind some rather dark clouds and we decided it was a good idea to head back down, but not before taking a few pictures! There are a couple shots of us standing on the summit, and one shot of Bierstadt from the summmit of Mt. Spalding. 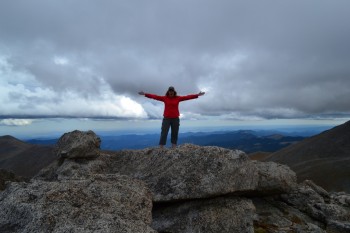 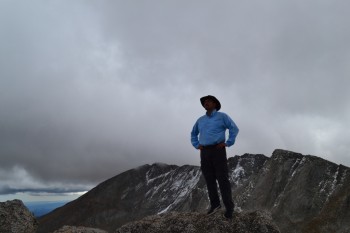 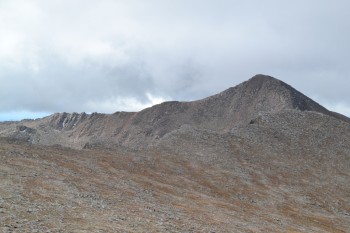 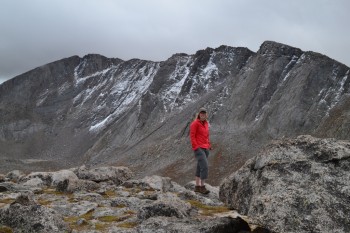 Down-climbing from the summit wasn’t too challenging and the path is very clear and worn.  There is one section of the hike which is a little steep and requires the use of hands to navigate.  We imagine that in wet, icy, or snowy conditions these rocks can become very slippery.  There were still some flowers left in this area, mostly alpine avens.  Below are a couple pictures of Allyson down-climbing this section. 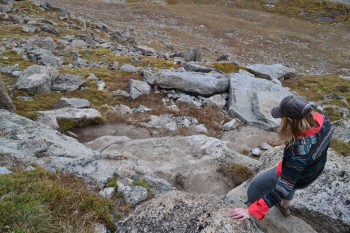 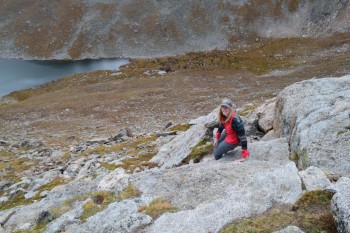 As we neared the trailhead it began to become very cold and windy. Pretty quickly after that drop in temperature it started to sleet pretty heavily. This hike was a great reminder of how fast the weather can change in the mountains. It had been nasty out initially, turned into a wonderful day with sunshine and blue skies, and then snapped back to even nastier conditions. The wind was strong enough that it came close to knocking us off balance at least once or twice. Despite the rapidly deteriorating conditions we oddly saw more people heading up the mountain at this as we neared the base than we had seen on the entire hike thus far.  Below are some images from after the poor conditions set in — the white streaks in the images is sleet speeding by. 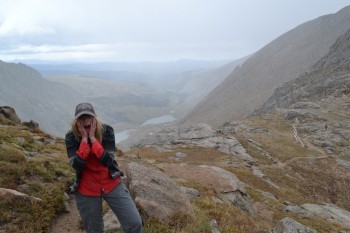 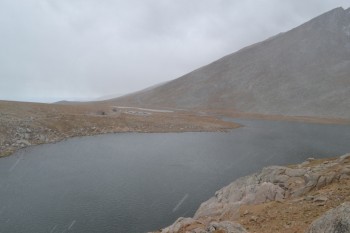 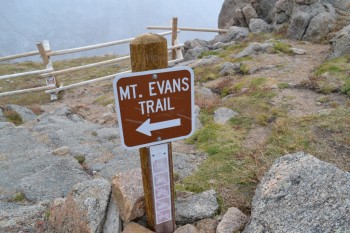 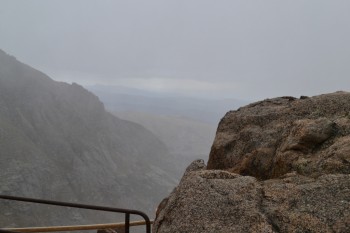 We were pretty excited once we were down and back in the warmth of the truck.  At first we had thought we’d look at the lake and head out, but we ended up on the summit of a 13er!  After our hands were warmed up and we had a little snack in the car we headed on out.  The drive down was pretty and the sleet let up and then stopped while we were on our way down.  Many of the aspen trees were bright yellow and the rest were on their way.  Next weekend will most likely be a brilliant display of foliage.  Our plan is to camp and try and glimpse the elk and the turning trees.  Until next time we leave you with the gallery below.