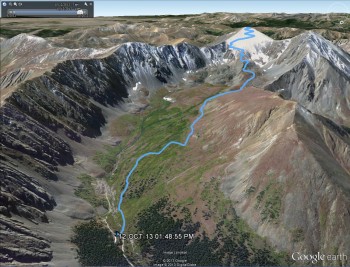 With summer gone for the year and thus the lingering darkness in the early morning hours, we opted for a 5:00 am wake up time instead of 3:30 am for our 2nd 14er climb. The forecast predicted a crisp, clear fall day at Grays Peak, and we were excited for this new challenge to take on. Grays Peak is the highest Peak located on the Continental Divide and one of the 54 fourteeners found in Colorado. In fact, it is the 9th highest peak in Colorado and offers amazing views of the area including Mt. Evans, Bierstadt and the Breckenridge and Keystone ski areas to name a few. And it’s just a Class 2 climb up to the summit making a nice, but smart challenge in early season snow fall. With the seasons changing, we anticipated this ascent would be much more difficult than Mt. Bierstadt. Snow and ice had already accumulated on the trail and temperatures were quite low. As we drove in the dark up I-70 to the Stephens Gulch Rd. which leads to the summer Trailhead, we had no idea just how cold. At the dirt 4WD road, a giant cherry picker was blocking the entrance. However, there weren’t any signs saying the road had closed for winter yet. We were stressing out a little bit at this point, because if you can’t drive in to the summer trailhead, you have to hike up this road which adds 6 miles RT to the hike. Not wanting to add this mileage to an already strenuous hike, we put the X-terra in 4-wheel drive and maneuvered around the cherry picker on some nice rocks and hill. The rest of the drive up was very bumpy and had some ice and snow but nothing too bad if your vehicle has enough clearance.

When we arrived there were only three other cars in the lot. The sun was now starting to come out, and we were ready to begin our ascent. The trail starts at an elevation of approximately 11,200 feet as it crosses a bridge over Stephen’s Gulch Creek. We crossed the icy bridge and began a steady climb up a well maintained portion of trail that enters Stephen’s Gulch and the upper valley. Our hands were numb and faces very cold at the start despite our gloves and gear. As we kept a nice pace, feeling slowly started to return. The first half mile through the valley, was free of snow, but small ice rinks seemed to form from where the snow had melted and refrozen the day before, and we had to take it slow at points to keep from falling. Seen below are photos from the start of the hike with Stephen’s Gulch Bridge. 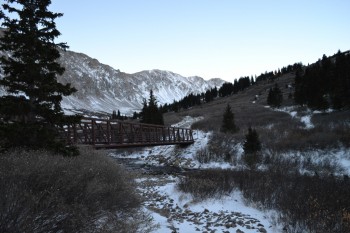 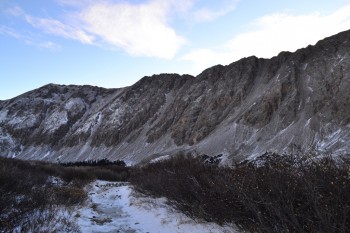 We continued through the valley steadily upwards for about a mile after which the trail flattened out for a almost a mile. This was a nice break, however a few inches of snow had accumulated here making speedy travel a bit more difficult. We skirted around Kelso Mountain, a 13er to the north of Grays and then proceeded once again, this time more aggressively, to ascend into the alpine tundra. At about 12,300 feet, the trail took us up and over a ridge in the upper valley. The snow began to get much deeper at this point forcing us to put on our Yaktraxs. Though microspikes would have been really nice for this climb, we both felt safe and more confident with just the Yaktraxs attached to our hiking boots. We climbed and climbed and our pace seemed very slow due to the snow which was 2 feet deep at some spots. Finally, we reached a sign at which the trail splits. Going left leads up to the Grays Peak Summit and going right to the neighboring fourteener, Torrey’s Peak. Our number one goal for the day was Grays so we headed left. As we climbed higher in the sky, the valley seemed further and further away. The views from above 13,000 feet were some of the best we have ever seen. The snow dusted mountain tops provided much more dramatic views than the summer could ever offer  us. Seen below are photos from halfway up the switchbacks to the summit. The large photo displays views from the north of the peak and Kelso’s Mountain. Grays Peak Summit is featured in the bottom right photo. 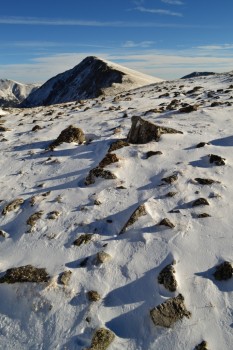 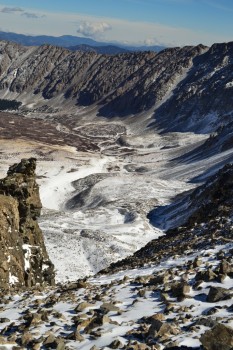 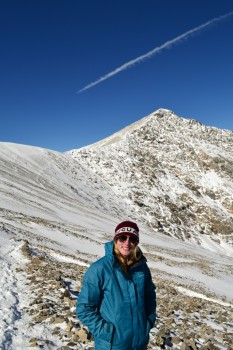 The next half mile of switchbacks were the hardest portion of the climb. Snow was very deep and only allowed room for one on a narrow portion right next to the edge of a steep drop off. We went very slowly here and carefully watched our footing. The switchbacks were also very steep, and we were also now above 13,000 feet with much less available oxygen. We had not been in high elevation in over two weeks, so breathing was a challenge. However, after checking the GPS and realizing we only had about 500 feet more in elevation gain to go, adrenaline kicked in and gave us the final push we needed. Our pace improved dramatically, and when we reached the summit we were actually surprised. Typically, we were used to false summits and promises of the summit just over that ridge…but after finishing the last short switchback, we looked up and were greeted with the smiling faces of two other hikers who had just made the summit before us. Seen below are our summit photos and view in all directions from the top of the peak. 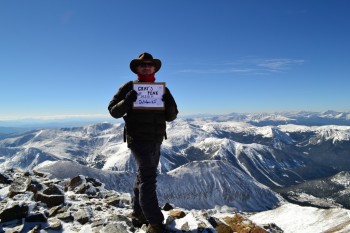 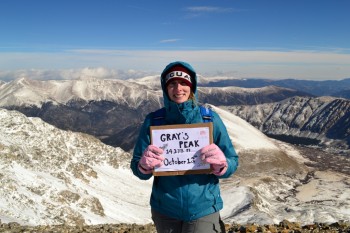 The windchill at the summit was in the single digits, and the actual temperature was somewhere around 16 degrees. We explored for a while and chatted with a few other hikers, though there were not many of us up there. We then proceeded to eat a twinkie at 14,278 feet. Perhaps we set a world record or something, but the Hostess’s comeback snack dessert was quite sweet and revitalizing  and completely worth our desperate attempts to open its package in the frigid cold. We spent a few cold minutes debating whether or not to summit Torrey’s Peak as well. This would mean descending the west edge of the Grays summit nearly 600 feet, crossing a narrow saddle and re-climbing 600 feet in just under one mile with the ascent occurring all in a quarter mile. The bitter cold made our decision for us. We opted to return and conquer Torreys Peak in the warmer summer months. However, we got some nice shots of the saddle and trail all the way up to the summit of Torreys which can be seen below. The photo on the left is a view from the Grays Summit, the photo on the right is looking up at Torreys Peak from the Grays Trail. 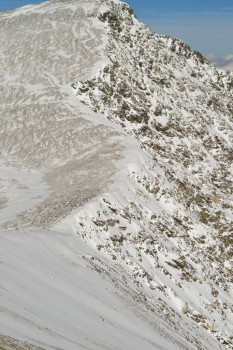 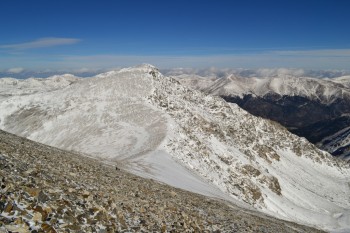 Usually our descents from peaks are made in record time, but the deep snow and slippery ice made this one slower than usual. On our trek down we encountered a lot more hikers than on our way up. This was a little tricky on the narrow paths and required one party or the other to stand in deep snow or the edge of a cliff to allow for passing which was not fun. In fact, we would recommended gaiters for this hike now (which we did not have). The snow kept getting in our boots (at least in Allyson’s), making for some uncomfortable blisters the last mile of the hike. Seen below are some photos from our descent. 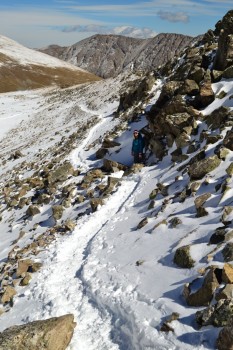 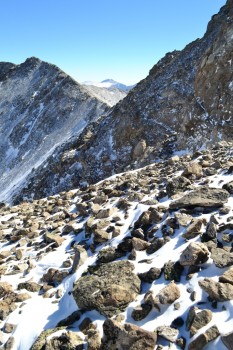 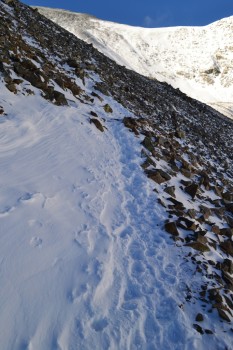 The day had warmed up quite a bit and much of the lower trail in the valley had turned to slush and mud. In our weariness, we turned and looked back at our great accomplishment. We climbed and reached the summit of our 2nd 14er, and in snowy conditions this time. Despite the blisters, hunger, and altitude induced hallucinations (that hiker in the trail head photo really was moving in real time!) it was all worth it. We had ascended over 3,000 feet and covered almost 8 miles in snow and cold. We trudged back to the car and Thomas being the gentleman that he is, off-roaded out of there and drove back home. Chinese food for dinner and then off to sleep. A nice fall Saturday. 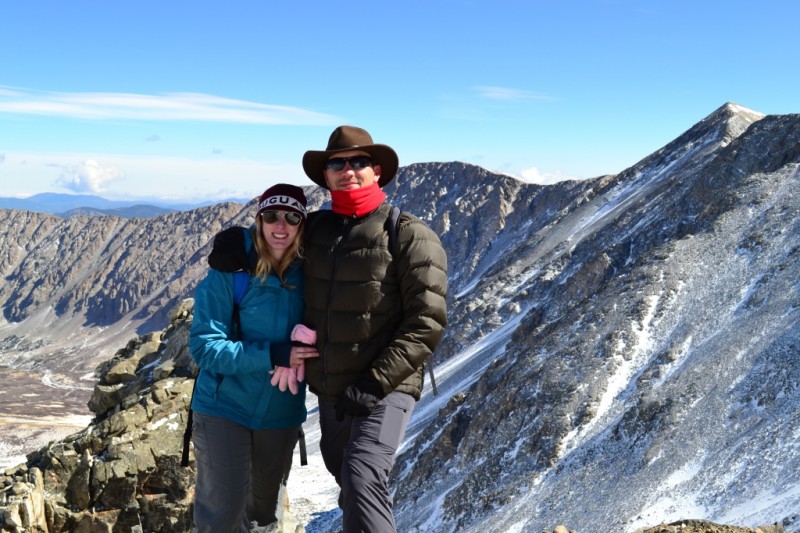