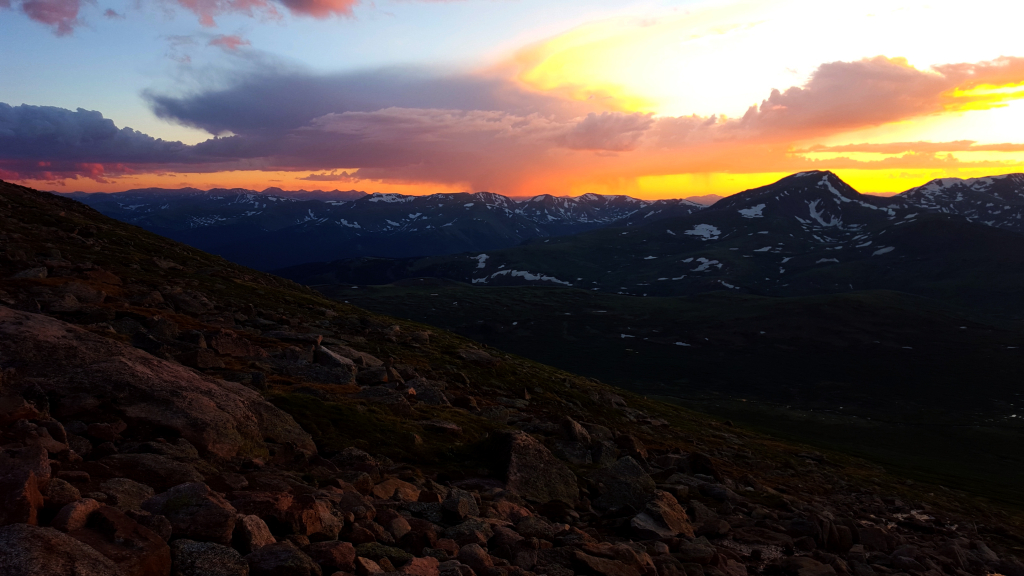 Will’s friend Julian came up from New Jersey and was excited about the prospect of getting into the Rockies. After talking about possibilities, Will and Julian decided they wanted to go camping on Guanella Pass and possibly climb Mount Bierstadt. We are always up for some camping and/or hiking, so we all packed our gear up and headed out to Guanella Pass on a late June Saturday afternoon.

We found a superb camp site and set up our sleeping arrangements.The Guanella Pass campgrounds are very nice, but do have a moderate overnight fee of 17 dollars plus 6 dollars per extra vehicle. Our site had two picnic tables, a charcoal grill, and a fire pit.  For great information on nearby campgrounds as well as availability visit the main website here.  Below is a picture from our camp. Mt. Bierstadt is slightly visible in the background. 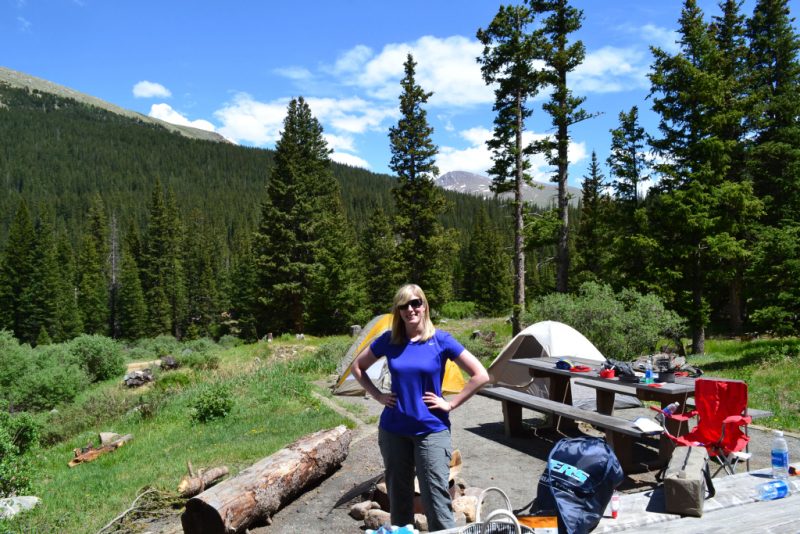 The forecast predicted possible afternoon showers, but the skies remained only partly cloudy for us.  After some talk we decided a sunset hike was in order, and we gathered our hiking supplies and headed out to the mountain around for a 5 pm start time.  Once there, we easily found parking in the main lot, and geared up.  The hike is between 7 and 7.5 miles round-trip, and we planned to be on the summit just before sunset. Typically during summer, hikers should be off the summit before noon (thunderstorms are common between 12 and 4 pm). However, the evenings routinely provide another window of calm weather for an alpine ascent, and you are likely to have the area to yourself! 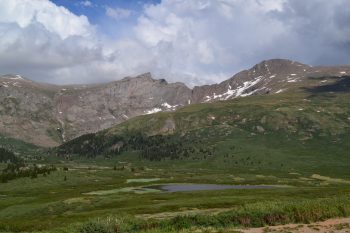 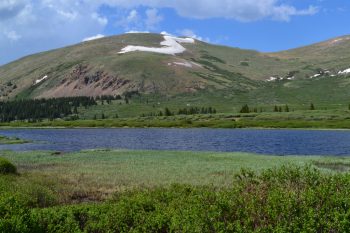 The first segment of the hike through the willows was nice, but muddy in some sections. Scott Gomer Creek was high, and we opted to walk north along the creek to an easier section to cross. We took off our shoes and socks to cross in order to avoid an uncomfortable rest of the hike. After the willows, we began to gain elevation and reached a nice overlook. Our friend Moses enjoyed part of the hike as well. 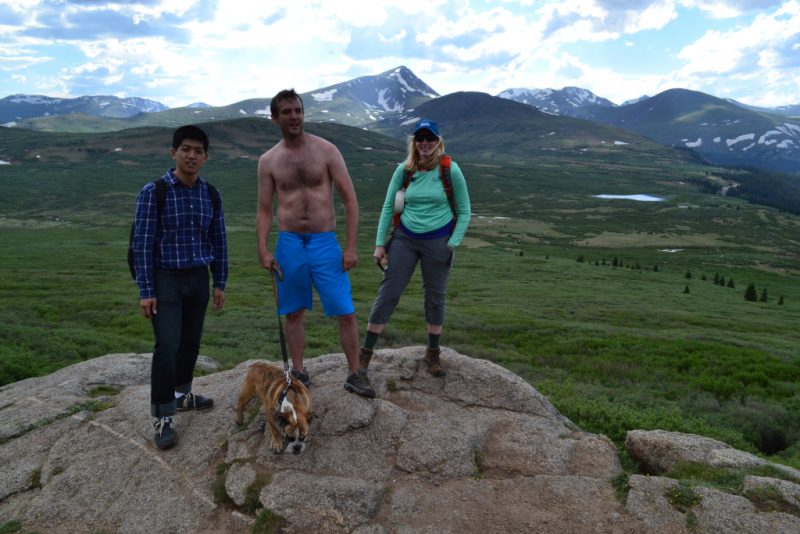 After the rocky outcrop, the elevation gain continued steadily for the remainder of the hike. It was still quite warm around 11,000 feet as the sun had not yet set. The weather continued to look mild and welcoming so we continued onward. We enjoyed the views and relative isolation that can so rarely be achieved on the popular Mt. Bierstadt (we only saw a handful of people descending). Seen below are photos as we left the willows. 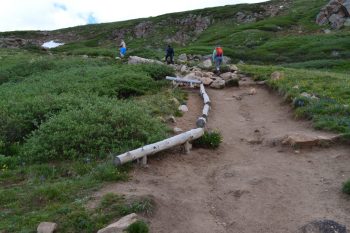 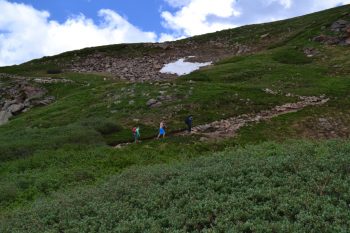 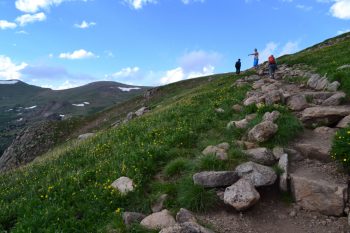 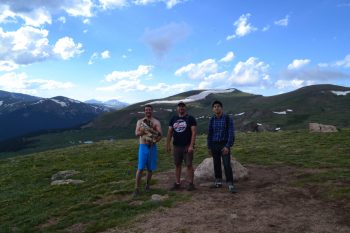 When we reached 13,000 feet, there were some remaining sections of snow and ice that we carefully maneuvered. The temperatures were beginning to drop as the sun dipped lower on the horizon, and it felt a little less like summer than earlier in the afternoon. Climbing in the evening after a full day of activities felt a bit more tiring than a morning summit attempt, too!  But the views were well worth it. 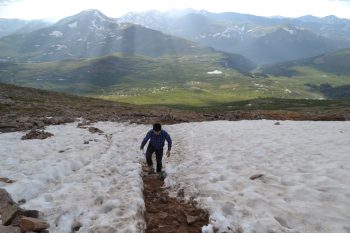 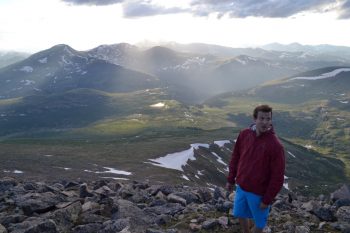 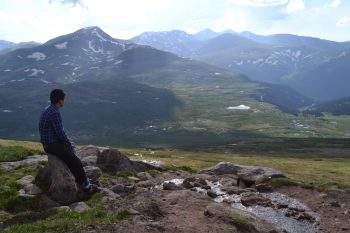 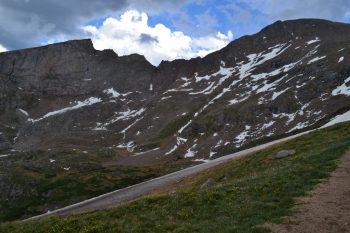 The summit was windy and chilly. With the light rapidly disappearing, we quickly took some pictures and began the descent.  Below are some photos from the top. Frozen Lake was still, appropriately, frozen! 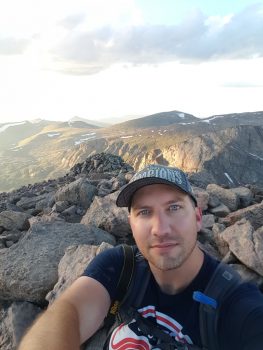 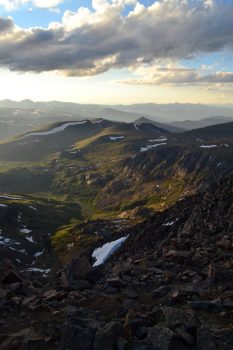 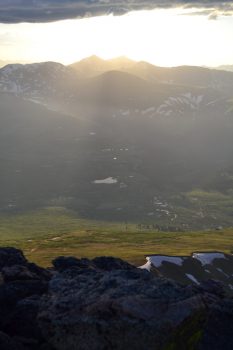 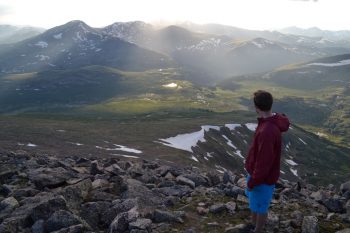 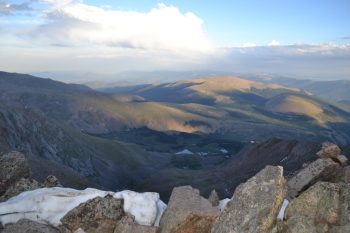 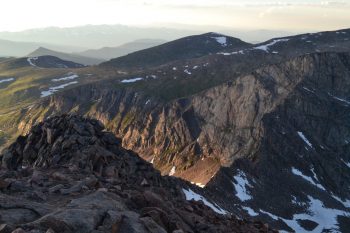 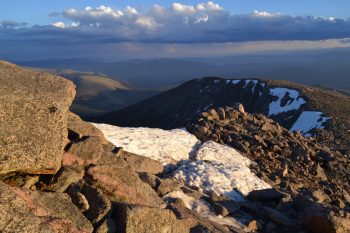 At 14,000 feet the sun began to set, leaving a hot, red orange glow on the alpine landscape below. It was truly breathtaking. Most peaks we climb are summited in the early morning, and we commonly catch sunrises.  (For our favorite sunrise hike check out our Grays and Torreys Sunrise post.)  A sunset was a unique experience for us on a 14er and truly breathtaking. Seen below are images captured as we descended in the alpine dusk. 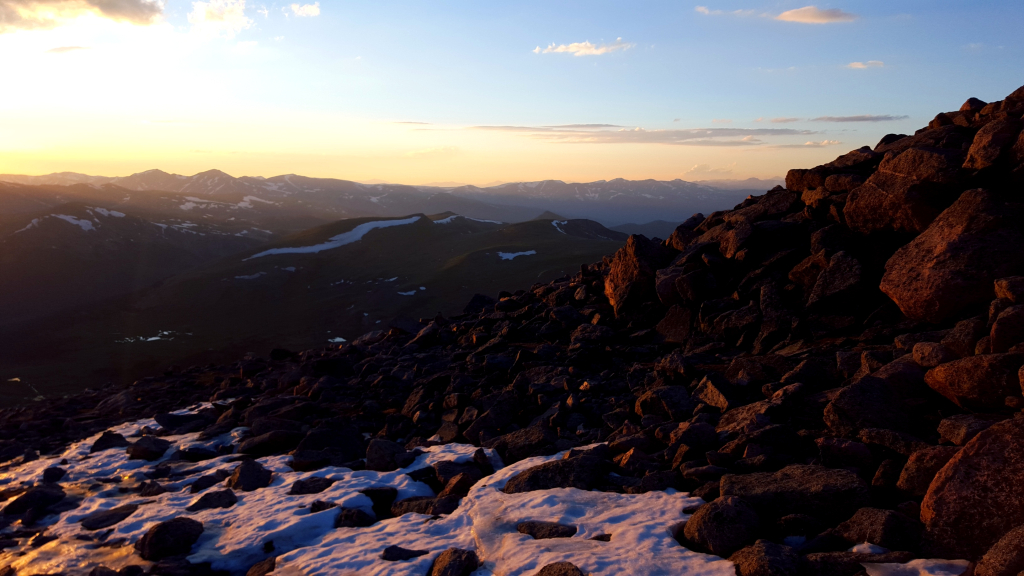 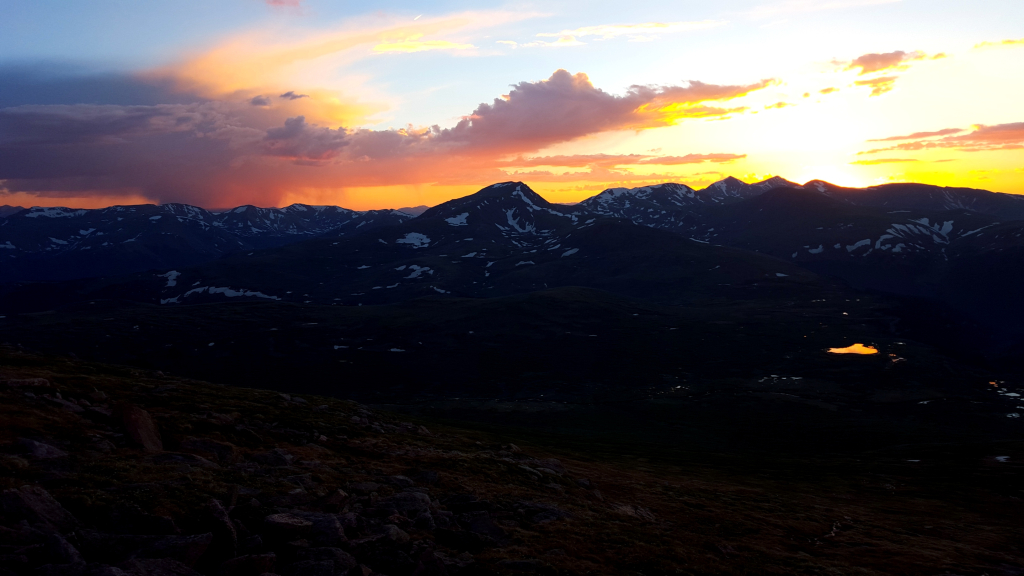 It was dark as we reached the willows, and things began to get interesting. Unfortunately, we only had one headlamp as the others were mistakenly transferred out of our packs. We carefully weaved our way through the dark trying to avoid stumbling on massive boulders and/or mud pits. The trail through the willows twists and curves, and one never knows if someone or something might be around the corner. While we ascended, the willows hike felt short. Descending through them felt endless. In addition to the lack of light, we alternated carrying Moses through the brush to avoid him overworking himself. Bulldog pups never know when enough is enough when it comes to playing.

When we approached the river crossing, we discovered that the water had risen significantly compared to when we forded it earlier in the evening. It was too dark now to bushwhack our way to a better crossing through the gnarly willows. We made a decision to cross then and there. This time we kept shoes and socks on to maintain better stability and to avoid cutting our feet. We each took turns wading through the chilly water while someone else held the light source for guidance. The crossing was only 10-12 feet wide, but the water was extremely cold. The water came up to the tops of knees in most spots. We all made it safely across and proceeded the last half mile or so back to the parking lot.

A sharp bark from the blackness of the willows gave us one last adrenaline rush before reaching our car. We couldn’t see anything in the dark away from the trail, but we assumed someone was hiding out in the willows with their dog as we also got strong whiffs of weed in the frigid air. There are strange things in the Colorado backcountry. The temperature had dipped into the low 40s now.  It was almost 10:00 pm.  We were all utterly exhausted by the time we reached the parking lot.

We drove the few miles down the pass to our campsite. At 10:15 pm we were ready for dinner..except for Julian who crawled in the tent to pass out. We enjoyed one of the tastiest, most satisfying chargrilled cheeseburgers of our lives that evening and then retired to our tents. It was a cold, tiring adventure and our fourth time on Mt. Bierstadt. Nonetheless, each trip up has given us a unique experience.

For more information and details on the route of Bierstadt enjoy our original Bierstadt post and our Bierstadt-Sawtooth-Evans post.