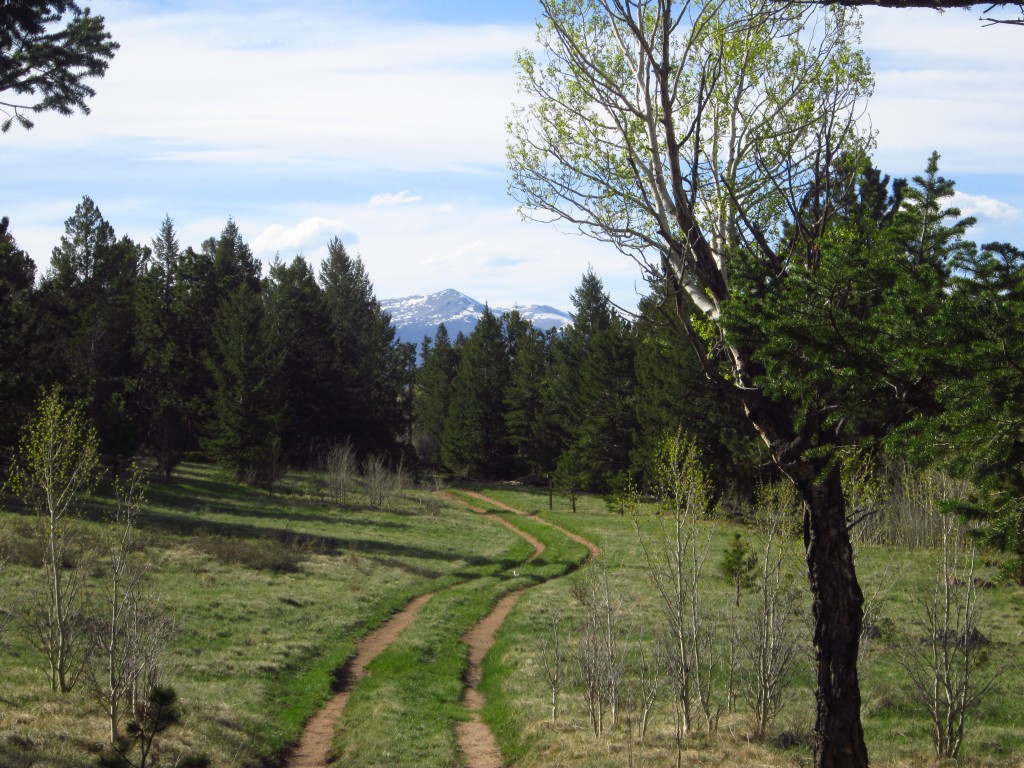 Our hike this weekend took us back into Rocky Mountain National Park, this time to the trails traversing the peaceful remains of the long ago inhabited farms and ranches of Homestead Meadows. The hike seemed appropriate for Memorial Day Weekend, as its miles of trails explore Civil War era relics as well as early 1900s images of homesteading of the western territories. In 1862, Congress passed The Homestead Act of 1862, to promote crop growing, ranching and building in many areas of the undeveloped west. Settlers were permitted to claim up to 160 acres of surveyed public land if they agreed to live on the land for at least 6 months out of the year for 5 years making improvements to the land. Today, the meadows are very quite, peaceful and full of wildlife and beauty. When we began the hike, we each tried to pretend what it would be like to be back here in time, without the modern conveniences of electricity, cars and indoor plumbing in the wild foothills of the Rockies.

We began the hike from Hermit Park at the Homestead Meadows Connector Trailhead. The route first led us about half a mile down a dirt road before crossing a small creek that led to a single track trail going up hill for a bit. The trail slowly worked its way up and down until leading us to another dirt road (which I believe park rangers can access by truck). After another mile uphill climb, we finally reached a gate that closed off all motorized vehicles and was accessible by those on foot only. (Homestead Meadows Trail 971). Shortly after reaching the main trail, we discovered our first glimpse into the past at the Brown Homestead. This homestead was actually from a bit later (1917 and 1919). Brothers Harry and Cloyd Brown claimed adjacent 160 acres and used the land for timber and cattle ranching. What remains of their beloved homes can be seen in the pictures top left and right. Bottom left photo depicts entrance to the Homestead Meadows 971 Trail. Brown Homestead was approximately 2 miles from the trailhead; elevation 8,320 feet. 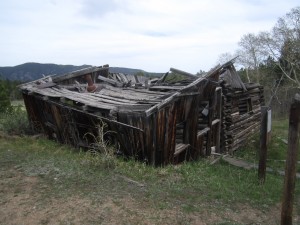 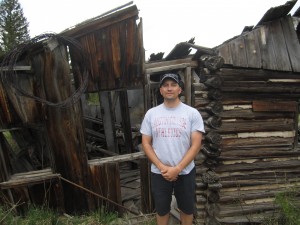 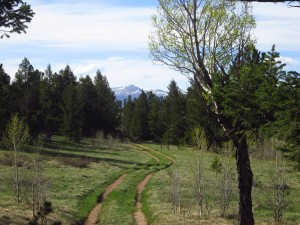 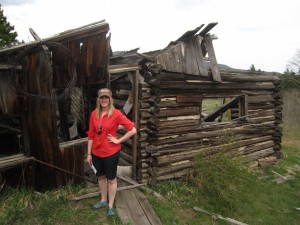 We then proceeded further down the trail which briefly entered a forest area full of Ponderosa pines and a few patches of Aspens here and there. After emerging through the timber, the trail opened up to an amazing meadow with the Rockies as a splendid backdrop. As we passed through the meadows, we came upon an area that appeared to be wetlands. This made this part of the trail a bit difficult to get through. We emerged (with feet a bit wet) from this section and once again entered another bit through the forest. We proceeded another mile or so south (could have been further) to reach Griffith Homestead. It appeared that there were only two building remains here but in much worse shape than the Brown Homestead. However, we did find some neat antique tools and food canisters on site here as well as what looked like an old radio. Unfortunately, we read that Griffith died while working on fence at his homestead. They say he felt dizzy and went in for a soda to feel better. He then returned to work but never returned that evening. His body was found the next day. Pictured below left are tools found on site. Pictured left are the remains of the Griffith homes. 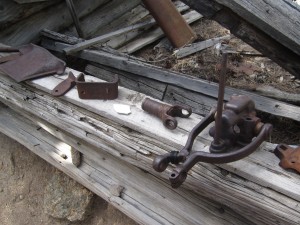 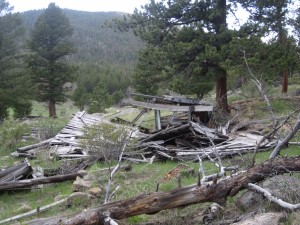 We kept moving south to reach the Walker home next. Sarah Walker was the only women who participated in the Homestead Act. She survived her husband and two children and decided to start a new life in the rolling foothills and meadows. They say she walked 15 miles a few times every week to sell eggs and milk to the locals in Lyons because she owned no horse. We were all very impressed by this strong women, who braved the wilderness alone and succeeded. It made us complain just a little less about the blisters starting to develop on our own feet from the long hike. There was very little left of the Walker Homestead, but we did stumble upon her old bedframe as well as a herding corral.

We saved the best preserved Irving homestead for last. To reach this site, we turned around an headed north on the trail. After a mile, the trail diverged and we followed an eastern path that led to the homestead about 3/4 mile away. The Irving homestead was amazing. There was a main house with a bathhouse in the rear with a sunken bathtub. In addition, further down the hill was an additional cabin and smaller bunkhouse. There also looked to be some sort of stable nearby. Though we didn’t travel to it, the Irving Homestead did a lot of timbering and a sawmill was just down the road. Pictured below are images of the well preserved remains of the Irving place. If you have a chance to hike this trail, make sure and make time to reach this site. It was the most interesting of the day. 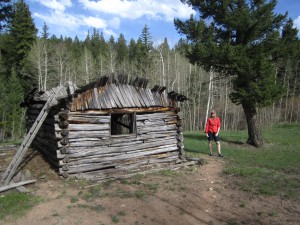 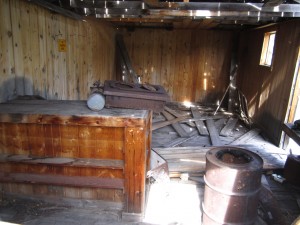 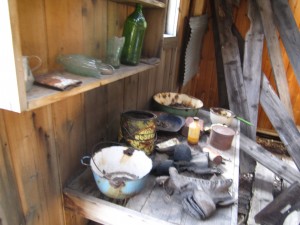 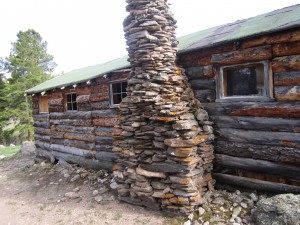 After spending adequate time exploring the Irving Homestead, we stopped to enjoy a snack and a Moscato and took in the scenery. We then hiked the 3/4 miles back to the main trail and headed back home the way we came. This was the hardest part of the hike. We were close to about 7 miles at this point and were feeling quite tired with two more to go. Overall, this was a very great hike, with lots of exciting exploration potential. Plus, it was not very crowded. If you enjoy historic settings, with the anticipation of an exciting find at each mile covered, then this is the hike for you. Though there were some slight elevation gains (rolling hills and a few climbs) scattered throughout the hike, most of the trail was just moderately strenuous due to the sheer length of the hike. We only covered a fraction of this trail complex as well. Further out, there are many more homesteads and miles of trail. The easiest way to access the trail is through Hermit Park. A daily park fee of 6 dollars is required upon check in at the visitors center. The hike may also be accessed from the Lions Gulch Trail 949 which is all on national forest lands and requires no fee. However, the trail is more difficult and has substantial gains in elevation and more distance to reach the meadows.

Pictured Below: Our group at the Irving Homestead 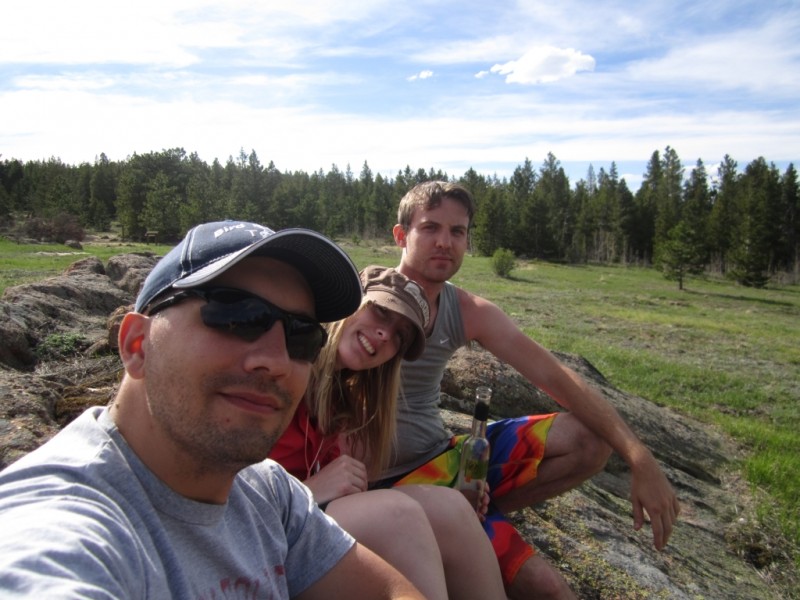 One thought on “Homestead Meadows Hike”