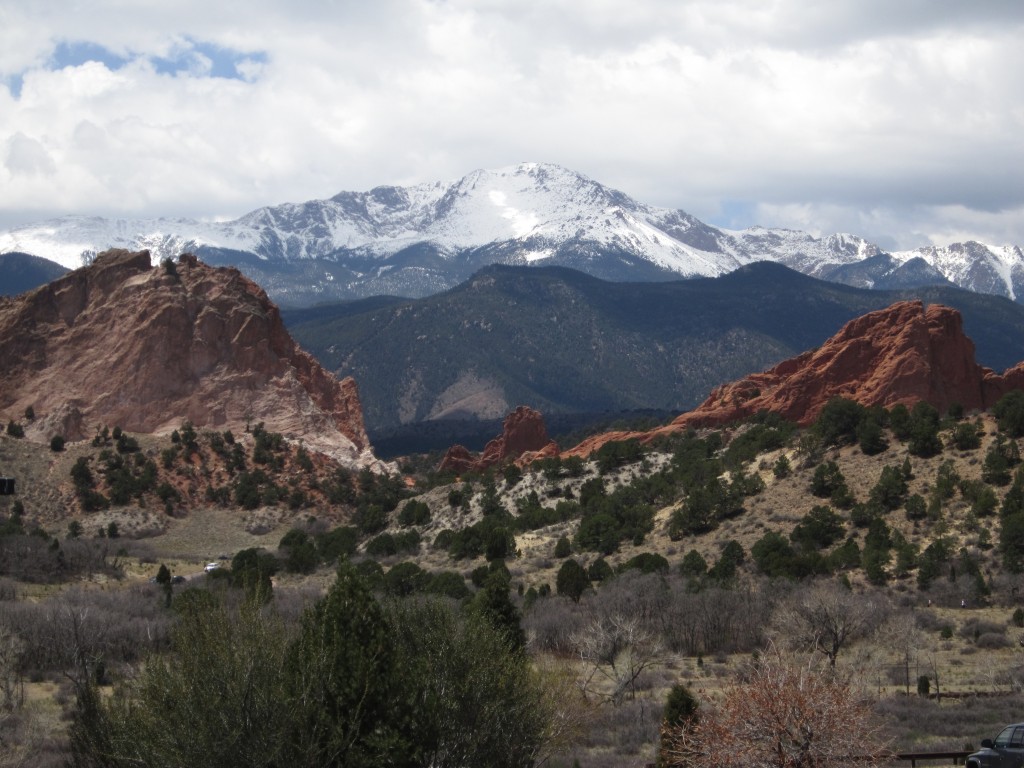 Our trek today led us to splendid geological wonder, as we were greeted with sheer cliffs of bright red sandstone protruding like jagged knifes out of the ground as we entered the Garden of the Gods National Park in Colorado Springs, CO. While not a traditional “quest into the wild” as we are going for with these hikes, the park’s striking contrasts of grassy plains and rocky mountains piqued our interest. We started the venture into the park with a stop at the Visitor’s Center which gave us a preview of what we were in for with crowds for the afternoon. Dodging children, grandparents, mothers and American summer (spring) vacationers, we managed to make it to the overlook at the visitor’s center which allowed for an amazing view of the park. Pictured below are scenes from the overlook before we began our hike.  The large snow covered mountain in the background is Pikes Peak, another very popular attraction.  While we didn’t partake in these activities, the park does offer a brief movie describing how the rock formations were created, a cafe to grab a quick snack and a gift shop. Plus, entry into the park is free. 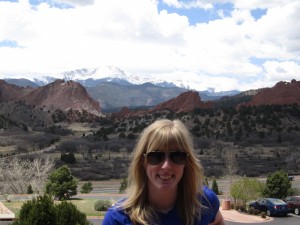 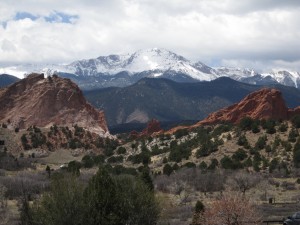 We then proceeded to drive into Garden of the Gods, and parked in the south parking lot, and then  entered on the Ute Trail.  The Ute Trail was named because it was a common trail for the Ute people to use and is marked today by a large stone right next to the parking lot.  A picture of this marker is seen in the bottom left image.  The trail had numerous yucca plants and provided an opportunity for a great picture of the plains contrasted with the mountains seen below on the right.  The trail runs next to Juniper Way Loop until it meets up with the main Garden Trail. 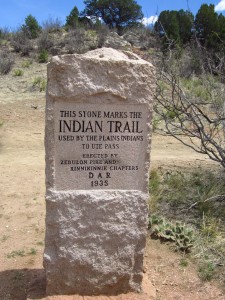 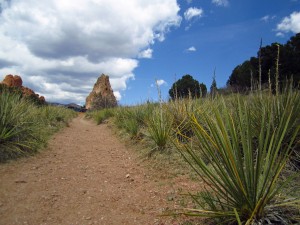 Once on the main Gateway trail and we made our way along a paved pathway with the throngs of other visitors.  During this part of the hike (walk) we were completely surrounded by the magnificent rock formations. The picture on the bottom left depicts the sheer size of the Signature Rock in the park.  In the bottom right is a view of the Gateway trail with the South gateway Rock and Signature Rock. 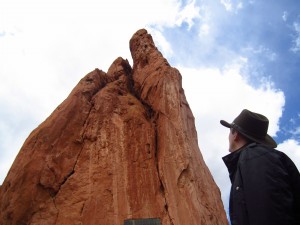 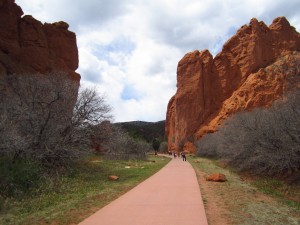 The rocks had worn down in many areas, and in fact there were signs warning of falling rocks.  These worn out spaces provided homes for numerous bird species.  We saw numerous ravens and pidgeons; and also saw many very brave black-billed Magpies and western shrub Jays.  There appeared to be some raptors in the air, but they were too far off to identify.  The Magpie is said to be the mascot of the Gardens and looks beautiful in flight.  Pictured below on the left is a Magpie and on the right a Jay. 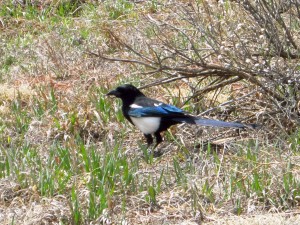 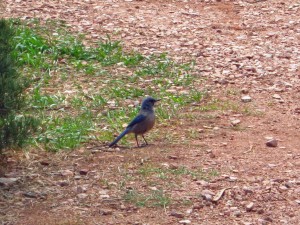 Other than birds we didn’t see much wildlife.  The park is very active and the human activity probably keeps most wildlife away.  The plant life, however, was extremely diverse.  Some parts of the Garden feel very much like a semi-arid desert with yucca, cacti, and Junipers; and then others feel more lush with pine and fir trees.  In fact, the Garden is what is known as an ecotome, which is a blending — or melting pot — of different ecosystems.  There are at least 5 ecosystems which converge on the Garden and give its  extreme contrast.  Examining the image below taken from the Ute Trail you can see the short-grass prairie front-and-center, which is devoid of trees, and then pinyon and juniper trees in a foothills transition zone towards the back-center and back-right of the picture. 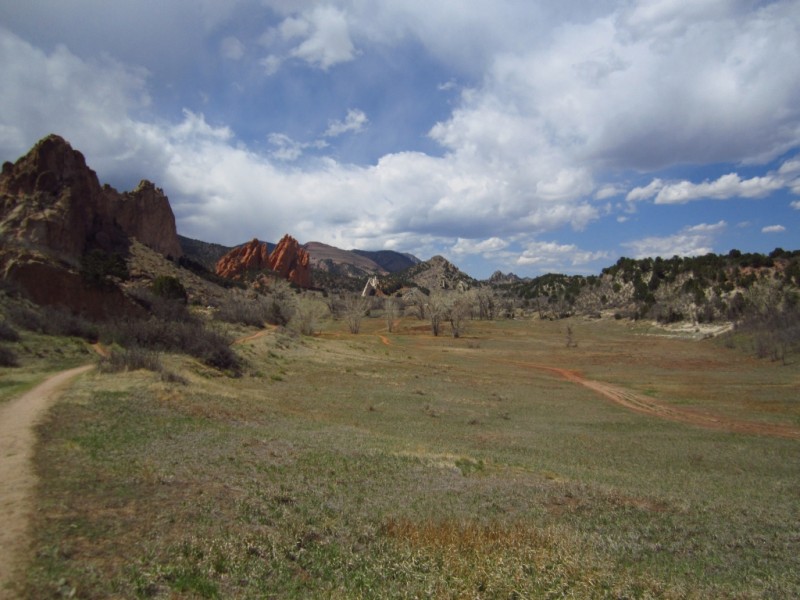 The major attractions at this stunning site are still the rock formations.  There are at least nineteen named rock formations with names ranging from Keyhole Window to Sleeping Giant to Kissing Camels.  The rocks vary in color from the brilliant red to dazzling white sandstone.  Many different types of rock are present, and due to the vast amount of sedimentary rock many fossils are visible along the hike.  Below are a few of the formations we saw. 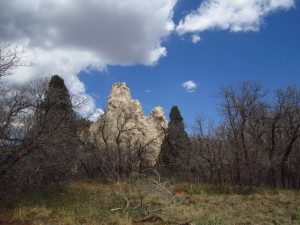 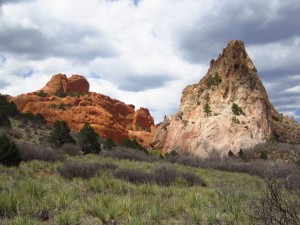 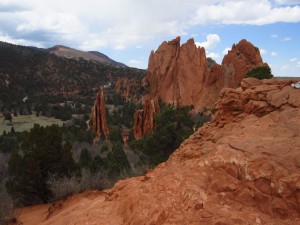 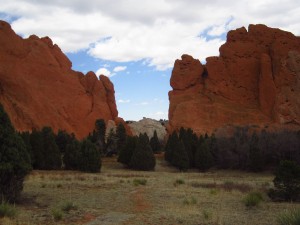 In addition to hiking at Garden of the Gods there are many other activities offered.  Horseback riding, various tour options including Segway tours, exhibits, mountain biking, rock climbing (permit required), and other events are all offered activities.  Some trails are designated for mountain biking or equestrian use, however, hikers are allowed on those trails as well.  We did notice that the bulk of the visitors were on the main Garden Trail, and it was relatively quiet for us on the mountain biking trails.  The hike has very little elevation gain and has very well maintained gravel or paved trails.  For the casual hiker you will remain at an elevation of roughly 6,400ft for the entire hike.  The highest peak at Garden of the Gods is a trifling 6,640ft when compared to Pikes Peak looming in the background at an elevation of 14,114ft.

All in all, the Garden of the Gods lives up to its reputation as being one of the 20 best public spaces and offers a dizzying range of activities for visitors.  It is a great starter hike for those wishing to get into hiking.  If you want to learn about geology and wildlife there are classes and tours galore, and when you’re ready you can even drive over to Pikes Peak and get into the Front Range.  This is also a great place to take those who aren’t quite fit enough yet to hike some of the more strenuous journeys out there.  The low elevation, relatively speaking, is also helpful for those not used to the mountain air and is great for visiting friends and family.  However, this is not the hike to take if you wish to “get away from it all.”  As a very popular attraction it is crowded, cars and vans are often visible along the hike taking driving tours, and it is not a very long hike with loops as short as 1/2 a mile.  If you are looking for something more challenging this isn’t your hike, but if you are looking for natural beauty and easy access this is your place.

3 thoughts on “Garden of the Gods Hike”