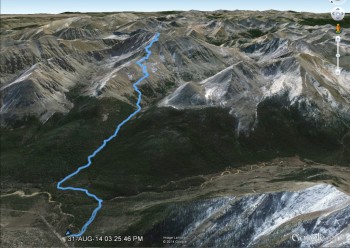 And unlike Game of Thrones, it is actually approaching rather quickly, more so, in fact, than we would like. Having an extra day off this past Labor Day weekend, we planned one of our final summer ascents of a 14er. We chose La Plata Peak located in the Sawatch Range about 20 miles southwest of Leadville, Colorado, as our 7th distinct peak this summer (not that we are peak bagging or anything…). We had the opportunity to explore some of the area earlier this summer when we summitted Mount Elbert.  In stark contrast to the Front Range, the Sawatch offers a little more seclusion and a glimpse into a rugged side of the Colorado backcountry. La Plata Peak means “the silver” Peak in Spanish, called such due to the copious amounts of silver deposits strewn throughout the area. In fact, visible from the trail is a residual rust hue carved into the sections of mountain, evidence of plenty of mining activity in the area.

Once again, we set our alarms for 4:00 am on a weekend morning, and sleepily rolled out of a nice slumber to climb another mountain. La Plata Peak is 14,336 ft. tall and the 5th tallest peak in Colorado. There are three distinct routes used to obtain her summit: the southwest ridge which is shorter and starts a little higher in elevation, the northwest ridge of which the trailhead begins right off of Hwy 82, and the infamous Ellingwood Ridge which we will discuss in detail later. We chose the standard northwest ridge due to the length and elevation gain (about 9.5 miles and 4,400 ft.) and amazing views of Ellingwood Ridge. Below is the sunrise behind Mt. Elbert as we drove to the La Plata Trailhead. 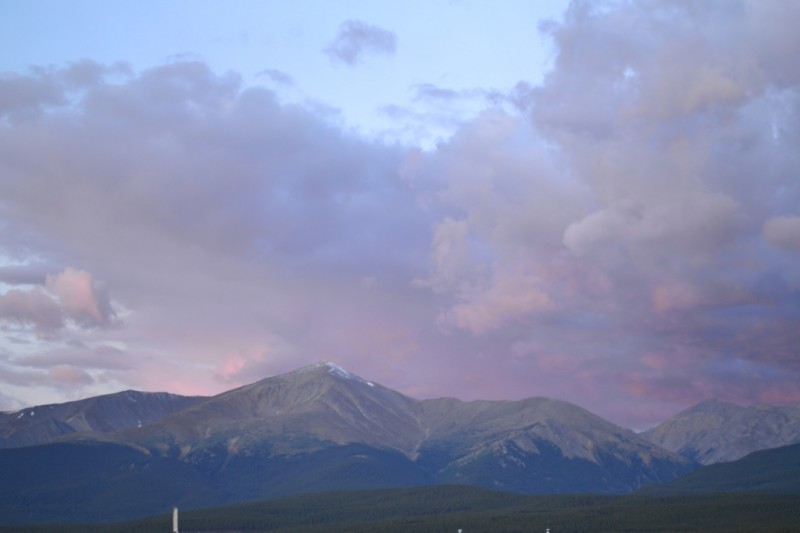 We arrived at the TH at about 7:20 in the morning but made an error in locating the trailhead. We mistakenly kept driving on the 4WD road past the TH. The rough road wasted about 30 min of our time, and we didn’t get on the trail until about 7:50 in the morning which is a bit of a late start for us. For those of you who venture here, park at the small lot located just off of Hwy 82.  Walk down the 4WD road (South Fork Lake Creek Rd.) and cross the bridge traveling for about 0.25 miles. As the road slowly gains elevation, look to the left and the La plata Peak TH can be found.  Unlike many of the Front Range 14ers the sign is not clearly labeled. Follow it into the woods to begin your adventure.

The trail pleasantly led us through a dense forest full of many aspen trees, some of which were already beginning to change colors. We lost a little elevation here. In fact, a pair of hikers that we ran into were concerned this was not the right trail because we were not yet gaining elevation.  During this lovely hike through the woods, there were two river/stream crossings. The first had no bridge, and we had to carefully balance across a few tree logs thrown across it. The second was a metal/wood foot bridge that crossed the powerful South Fork Lake Creek. There was quite some distance between the bridge and the raging waters below us. To our right, we were greeted with a powerful waterfall and smooth canyon rock wall, carved out after many years by the water that rushed over it. Seen below are photos of the creek crossings and waterfall. 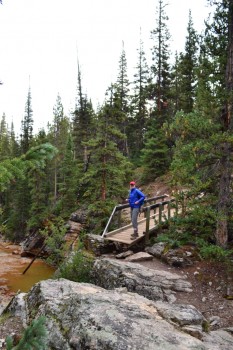 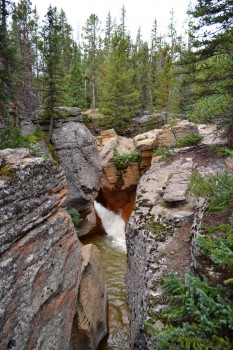 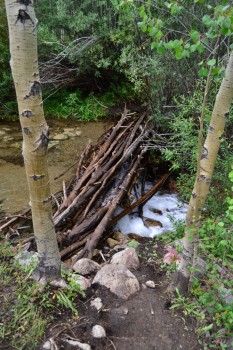 After the bridge crossing, the trail splits. Take the trail to the right. The left is incorrect and leads to an abandoned mine or so we read. After this point, the trail picks up elevation. We soon reached the “stairs”. To prevent erosion through these very steep sections, trail workers and volunteers have built stone and log steps. These steps really got our heart rates up and provided a great warm-up for the rest of the climb. 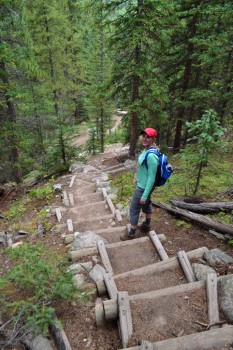 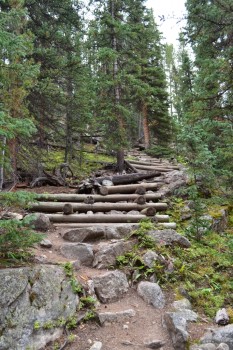 We continued to travel up La Plata Gulch for about a mile alternating between these steep steps and long steep switchbacks, enjoying the sounds of the rushing waterfall to our right. After one mile, we reached a clearing and flat trail. It was beautiful through the sections of the trail and a nice reprieve from the steps in the forests. However, we could now see our goal, and it seemed impossibly far away. Seen below is the beauty we encountered in the gulch. 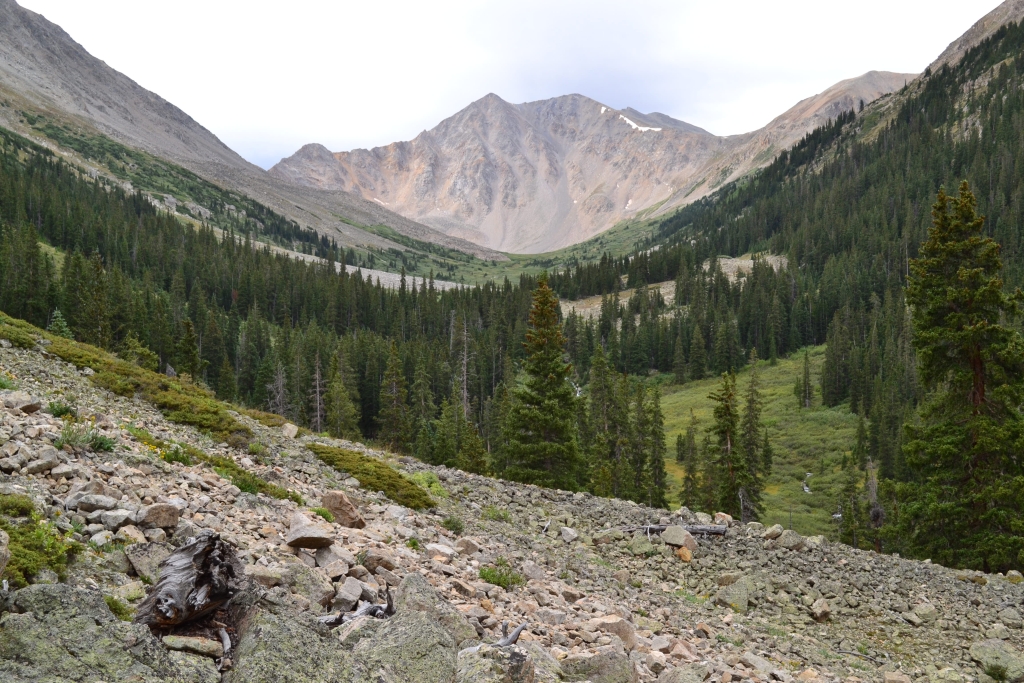 We continued through this brief section and then began to slowly gain elevation again. As we approached 11,100 feet, the trail led us away from the gulch and up 1000 feet on very short, steep switchbacks. This portion of the trail was long and not our favorite. The switchbacks were so short that our distance gained seemed minimal. Finally, the switchbacks eased up on steepness (at about 11,800 ft), and we began a long steady traverse on the hillside. Seen below are photos as we exit the gully and approach the ridgeline. Notice the first glimpse of snow-covered La Plata can now be seen in the bottom left picture. 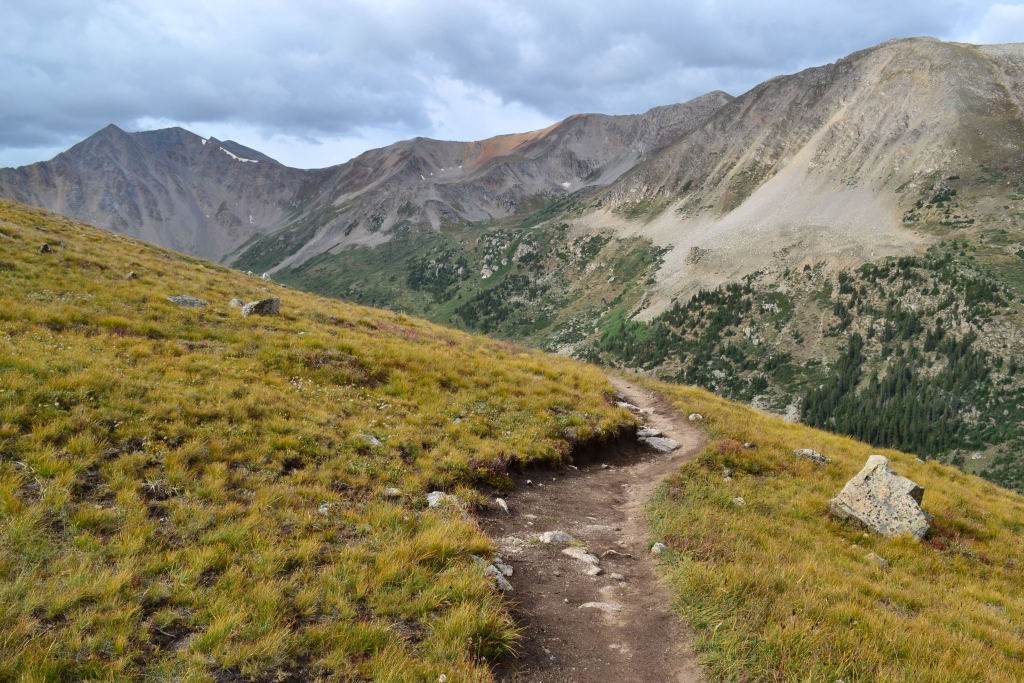 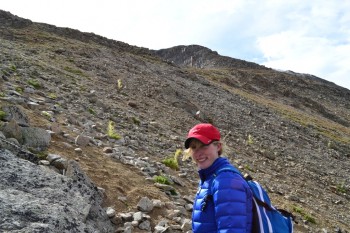 Eventually, we were at the start of the Northwest Ridge (about 12,800 feet). It was here that we were greeted with our first views of Ellingwood Ridge. This amazing ridge is another third way up to the summit of La Plata. It is a long class 3/4 ridgeline climb that gains just under 6,000 feet in elevation. Route finding, good fitness, and some comfort with moderate climbing and exposure are all a must if you want to tackle the ridge. We hope to try this next summer season. We have heard a perfect bluebird day is what is necessary to make an enjoyable trip across Ellingwood Ridge. On this hike, we were content to admire her majesty from the relative safety and comfort of the northridge. Seen below are photos of Ellingwood ridge and our ridge traverse. 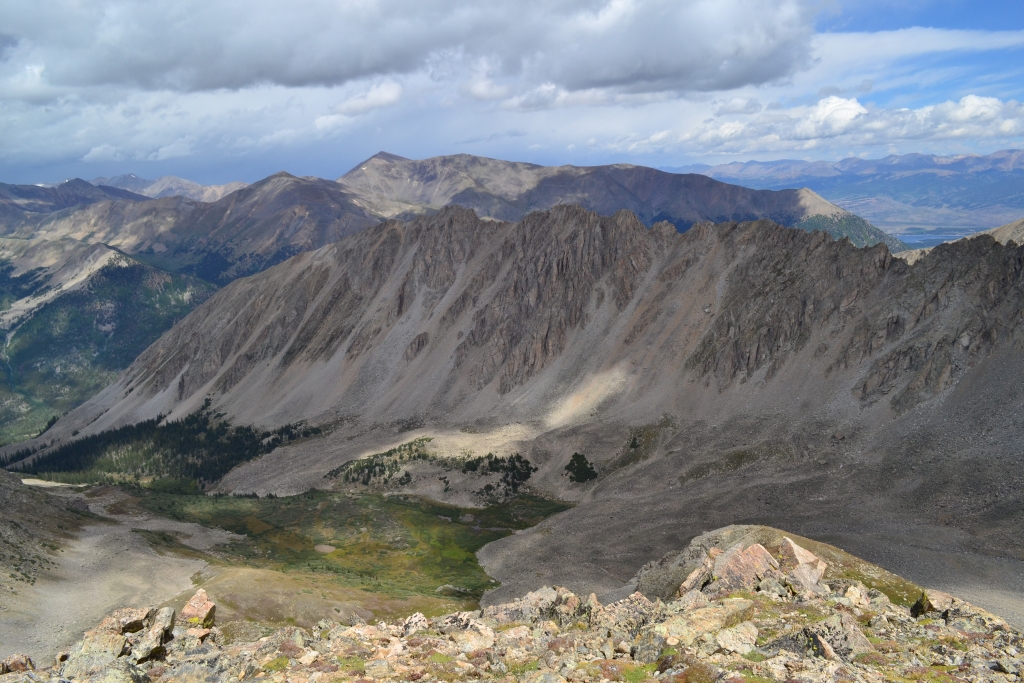 As we began the traverse across the ridgeline, we were greeted with tremendous wind. It must have been gusting close to 50-55 mph (the wind certainly impeded walking and almost knocked us over a few times), though we had no way to get an accurate reading other than estimating based on how much our bodies were being pushing around. We continued to trudge across the ridge, and began some class 2 work in spots to avoid wind exposure on the main trail. Large talus litter the last 1.25 miles of the trail and make route finding somewhat interesting.  We circumvented the large buttress in front of us and continued up. Finally, we reached a moderately flat section at roughly 13,600 feet. We could now see the summits of La Plata and East La Plata Peaks. At this point, there was snow on the trail. We were a little surprised to encounter this much snow at the end of August. Once again, we skirted the true trail to avoid some of the slippery snow. We favored the rock hopping over punching in the icy snow. 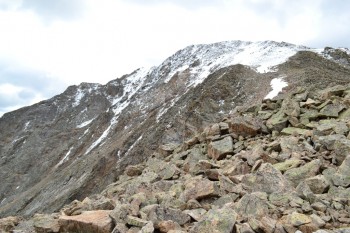 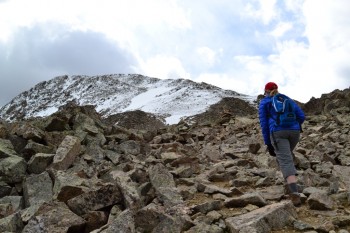 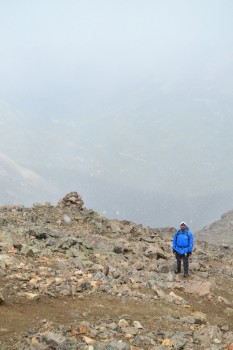 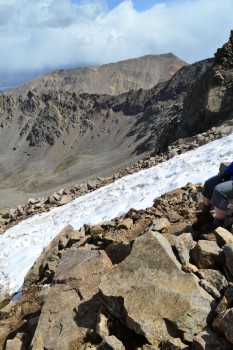 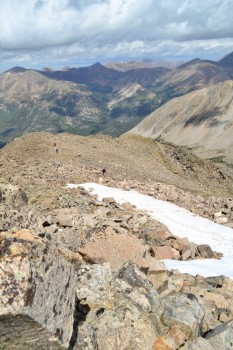 From here on up, the wind got worse and a thick cloud came over the mountain. It thankfully didn’t look like a thunderstorm cloud, but it turned out to be a snow/sleet cloud. Conditions rapidly began to deteriorate. We pressed on for a while until 14,206 ft. We were just below the true summit, but visibility was fading and the wind, sleet, and snow were leading to what we thought would soon be a white out. Instead of fighting to tag the summit registry, we turned around and headed back down. The next 600 feet down were highly uncomfortable. We had cool weather clothes, but not winter weather clothes. This is another example of how unpredictable weather can be at 14,000 feet. The reports had called for no precipitation but here it was August, and we were in a snowstorm. At times, we had to huddle behind cairns to keep from blowing over. Below are some images and a video which includes some footage of the snowstorm. 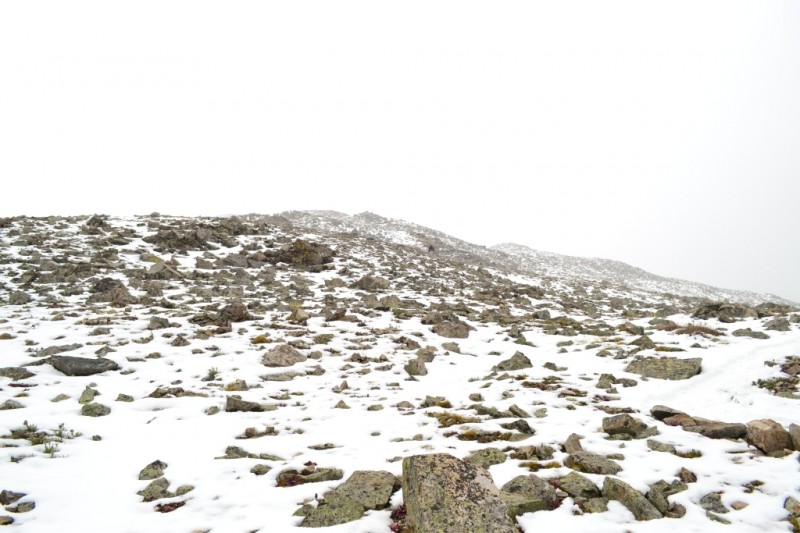 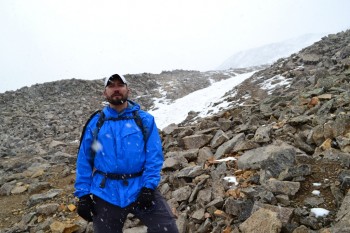 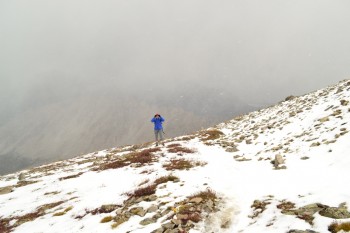 Interestingly, right at about 13,500 ft. the spot at which the first snowfield appeared everything cleared up. We could still see the storm a few hundred feet above us, but conditions were now nice enough that we could sit back and finally eat something and relax a minute. We chatted with another hiker coming down the mountain behind us, a cool guy from Seattle. He was prepping to climb Kilimanjaro next month. We are jealous. The storm above us seemed to be moving away, and for a few minutes we considered trudging back up to sign the summit registry. But another system appeared to be in the not so far distance, and we opted to continue down. Plus, the wind had still not relented. Seen below are photos and clear skies on our way down. There is no way to put into words the true bliss found in the photograph below. 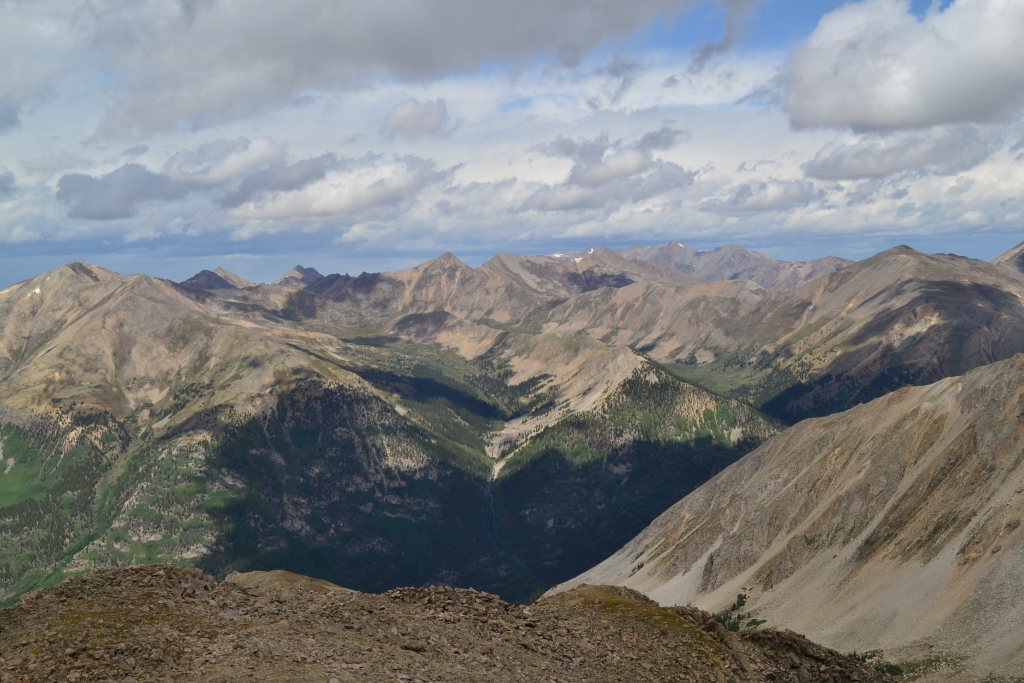 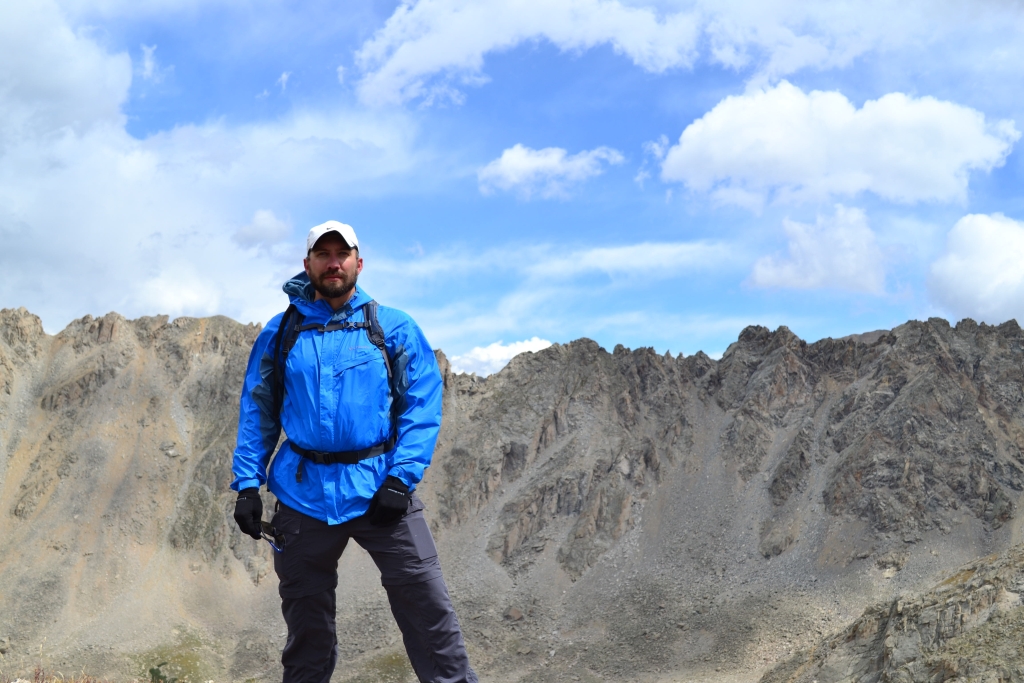 The hike down was very beautiful, and we took time to take in the scenery and few remaining flowers. The stone and log steps were knee killers though. We took several breaks to get in some stretching to ease the discomfort. The hike back through the forest seemed much longer returning than it did on our ascent. We were a little upset that the weather interfered with our plans, but the mountain will always be there well, at least for the next few million years. This 14er was not crowded at all, and it was a holiday weekend. We highly recommend climbling La Plata Peak. Just be ready for some quad burning fun.