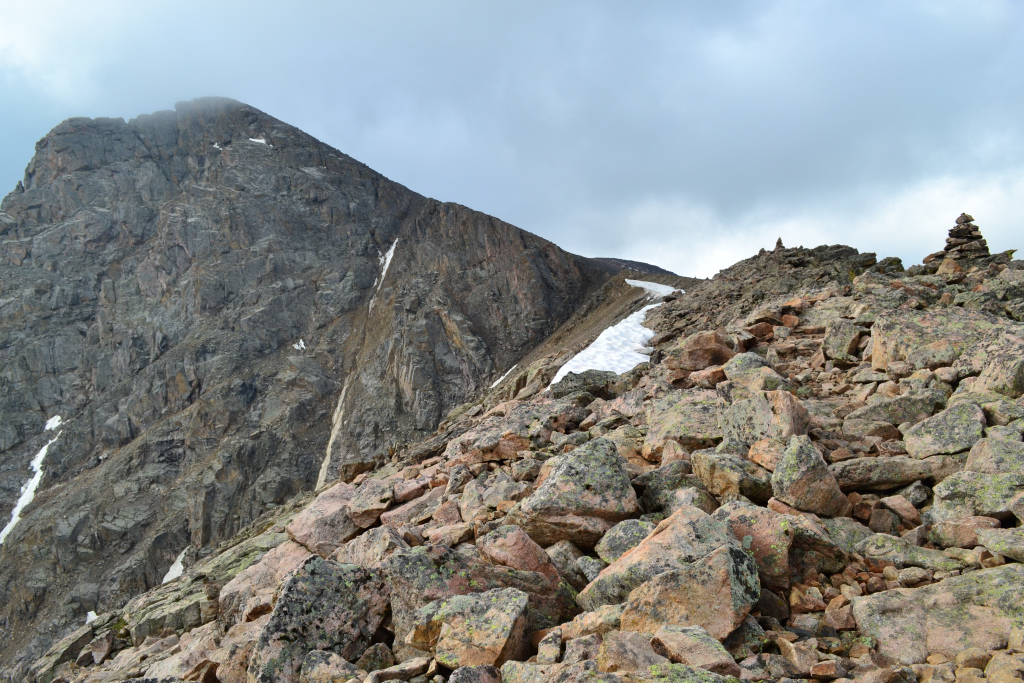 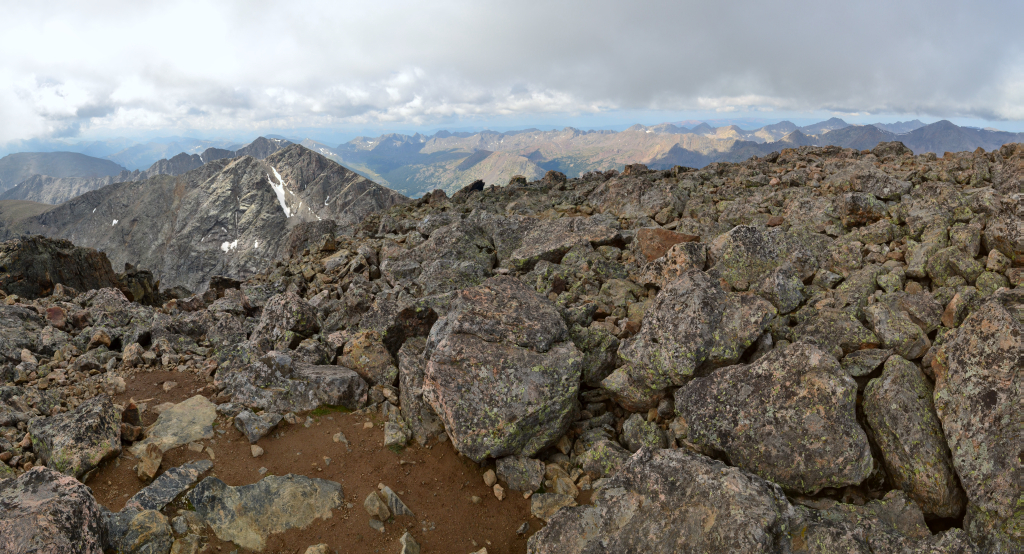 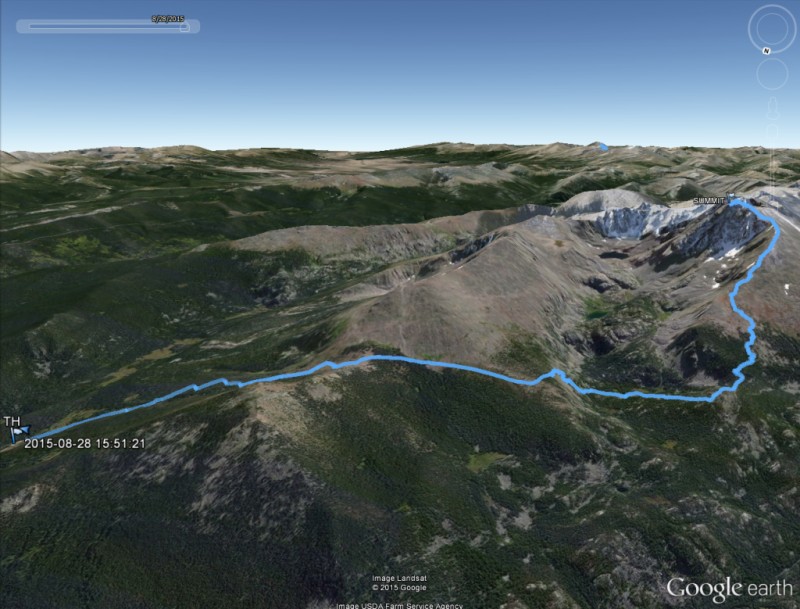 For years, rumors circulated that a natural cross could be found deep in the rugged back country of Colorado. Until photographer W.H. Jackson produced the famous photograph in his geographical survey expedition with F.V. Hayden in 1873, the existence of the beautiful religious symbol was just speculation. The beautiful image taken just after dawn from Notch Mountain erased any doubts. The natural cross of snow lays across the rugged face of the mountain formed by two deep ravines and has been tempting hikers, nature enthusiasts and pilgrims ever since Hayden and Jackson’s famous expedition.  While the mountain and surrounding wilderness has been the subject of beautiful poems, famous paintings, and a place of prayer, it has also been a place of tragedy. Since 2005, there have been two deaths, one presumed, as no trace of the hiker has ever been found. Every year numerous hikers have required rescue after becoming lost, and The Gazette of Colorado Springs has gone so far as to have called it “the Bermuda Triangle of Colorado.” In fact, a member of Vail Mountain Rescue Group we encountered on the summit ridge told us they have already had to assist 6 climbing parties that have become lost on the descent this season.

The allure of Holy Cross has not eluded us either. The mystery, intrigue, and challenge of the mountain finally pushed us towards a summit attempt on the last week of August. Mount of the Holy Cross stands prominently in the northern portion of the Sawatch range at a height of 14,005 feet, just making the cut-off for an official Colorado “14er”. To reach the summit trailhead, we drove to Minturn which is just south of Vail. From Hwy 24 we took a right on Tigiwon Rd. and followed the rocky dirt road 8 miles. We tent camped at the Halfmoon campground and enjoyed a quiet (well almost) night under the stars. Seen below are photos of our arrival in Minturn, our campsite and the brilliant night sky. 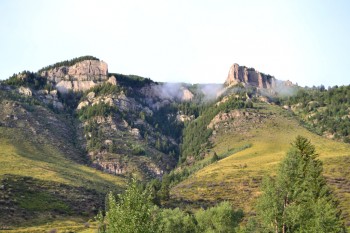 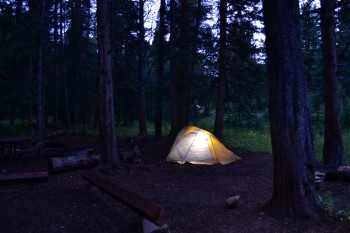 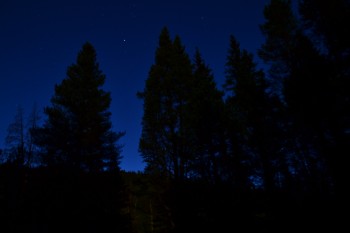 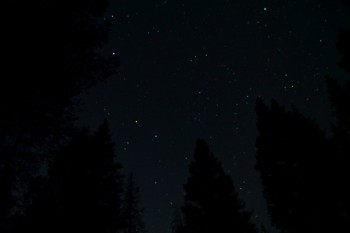 We tucked in for the night at around 10:00 pm. Shortly after, we were awakened by a violent thunderstorm. The lightning lit up the sky brightly. Every minute or so another loud clap of thunder sounded, and then the rain began. We huddled under the protection of our tent and prayed that the canvas would keep us dry. We eventually fell asleep, and the tent thankfully kept us dry until morning. The alarm went off at 4:15 am, and we slowly got packed up and ready without a full night’s rest.  We donned our head lamps in the darkness of the cold early morning and hit the standard North Ridge trail. Fortunately, the sky was clear and the storms had ceased. We quietly hiked for 1.5 miles in the dark towards Half Moon pass. We gained about 1,300 feet of elevation during this early morning portion, but the darkness has a way of hiding the ascent and thus it went by quickly and without much notice on our part. As we approached Halfmoon pass the sun started to rise revealing a thick layer of fog below us. The moist air looked like a waterfall rolling over the thick treeline in the distance. 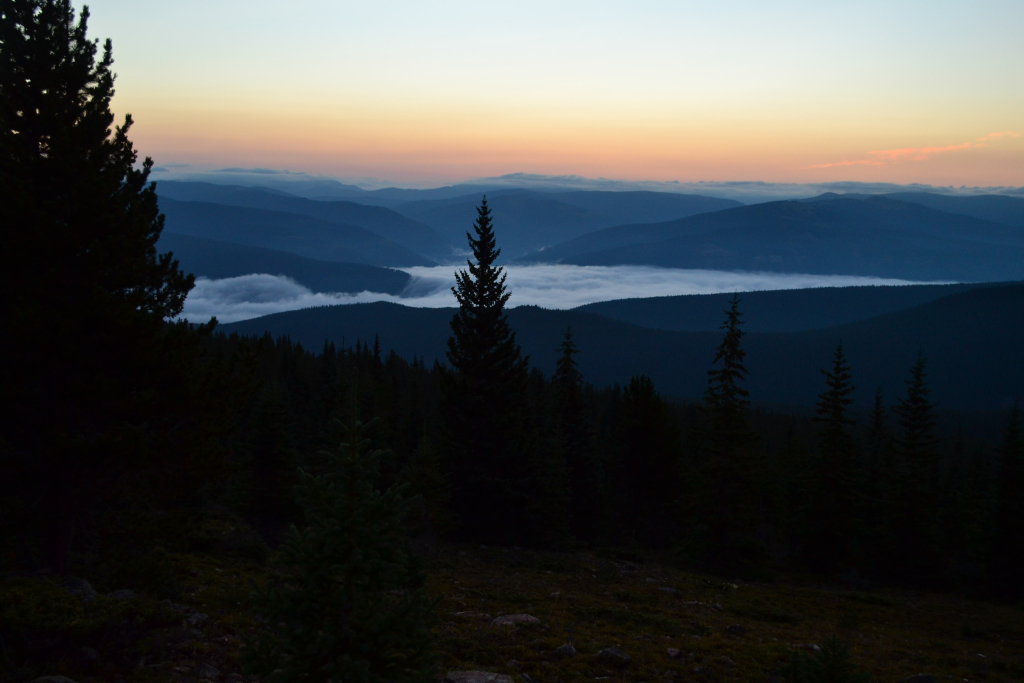 Utilizing the North Ridge route requires climbing Half Moon Pass and then descending into East Cross Creek thereby losing a bunch of elevation before gaining the summit of Mount of the Holy Cross. In fact, many hikers choose to attempt the summit in two days by camping at East Cross Creek to minimize the daily elevation gain.  As we descended the pass, we gained our first views of the distinct and exquisite mountain. Unfortunately, the cross cannot be seen from the route we took. In order to gain a view, the Halo Ridge route via Fall Creek and Notch Mountain trails must be taken. In addition, the cross is not well visible during the late summer months as much of the snow has melted out. We plan to attempt the more demanding Halo Ridge early next season or at least climb to the Notch Mountain shelter to get a great view. The first photo below reveals alpenglow on our first view of Mount of the Holy Cross. The second photo was taken during our return to give some perspective of the distance necessary to reach the summit. 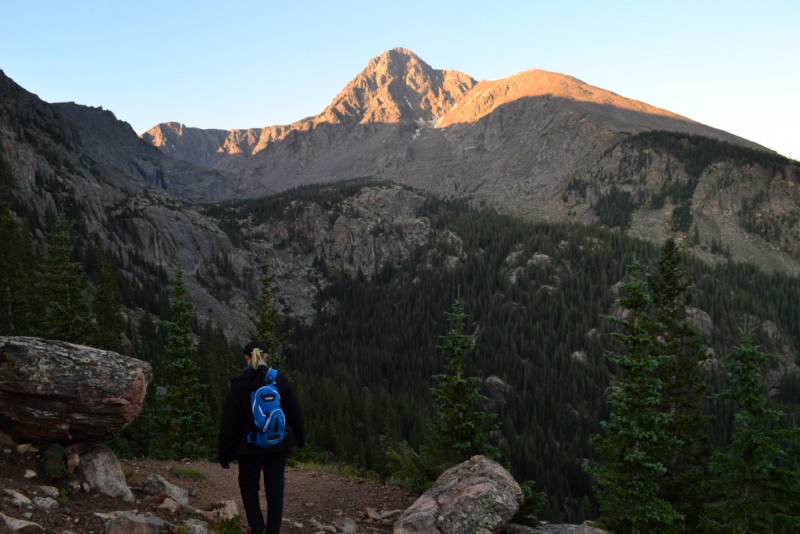 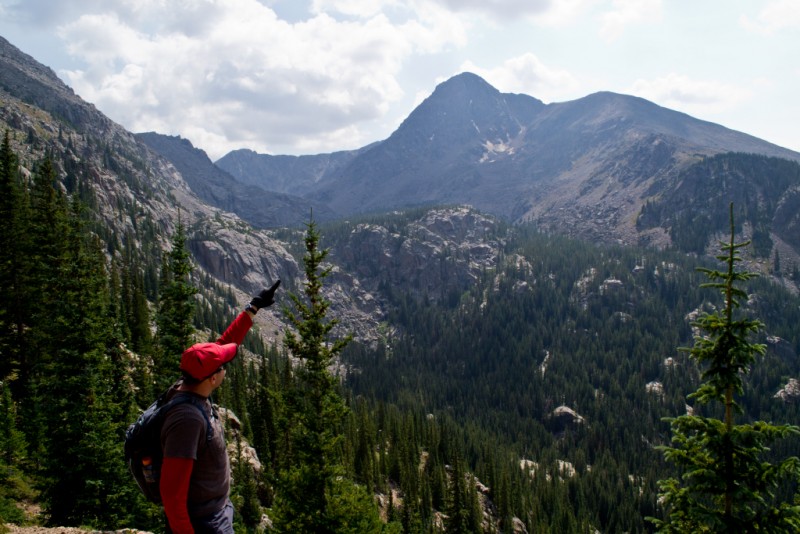 The descent into East Cross Creek proved to be very steep. After about a mile of down climbing, we finally reached the creek crossing and all the backcountry campsites. After crossing the creek, the trail began to regain elevation. We followed several steep switchbacks to treeline. 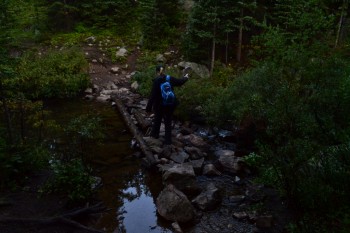 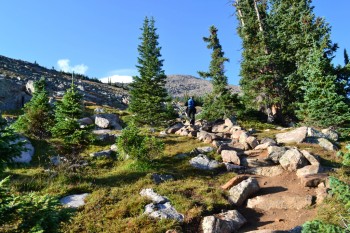 After treeline the real challenge began. From the creek to the summit we gained approximately 3,330 feet of elevation in 2.7 miles making for an average grade percent of around 23. However, we encountered a mile of 30% grade incline before reaching the ridgeline, and another 30-35% grade incline in the final 0.35 miles to the summit. Seen below are photos taken just after treeline while we pushed for the ridgeline. The summit of Holy Cross can be seen in the background. 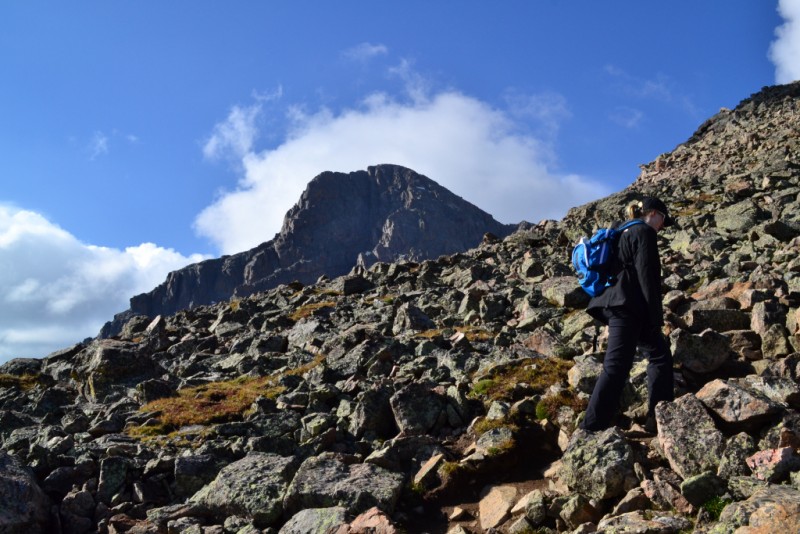 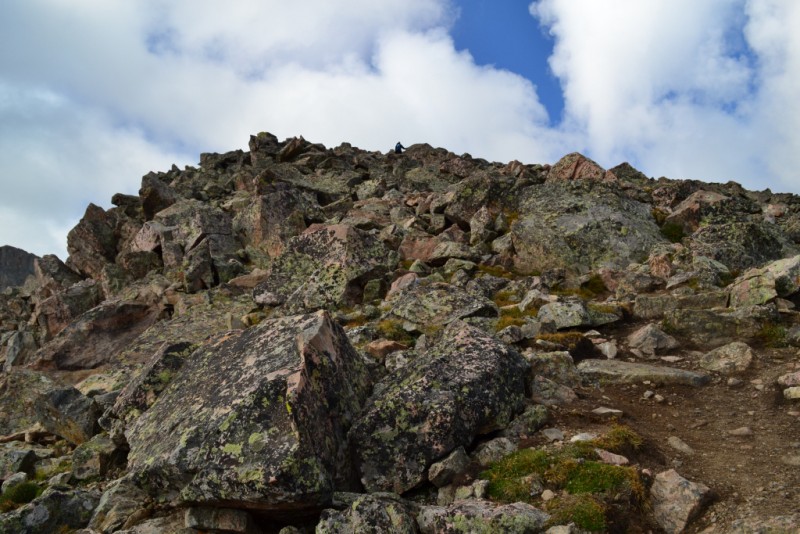 With each foot of elevation and distance gained we got to see a little bit more of Holy Cross. Despite our progress, her summit still looked impossibly far away. The trail above treeline was very rocky and consisted of many stone steps and rocks. Route finding was not necessary at this point due to all the work the Colorado 14er’s Initiative has been doing maintaining the trail. Once we reached the ridgeline the incline of the trail mellowed out briefly, and we were able to enjoy the impressive views of the mountain and surrounding wilderness. This was a wonderful portion of our ascent. A layer of fog surrounded the summit of Mt. of the Holy Cross for a brief 15 minutes. We captured the moment below. 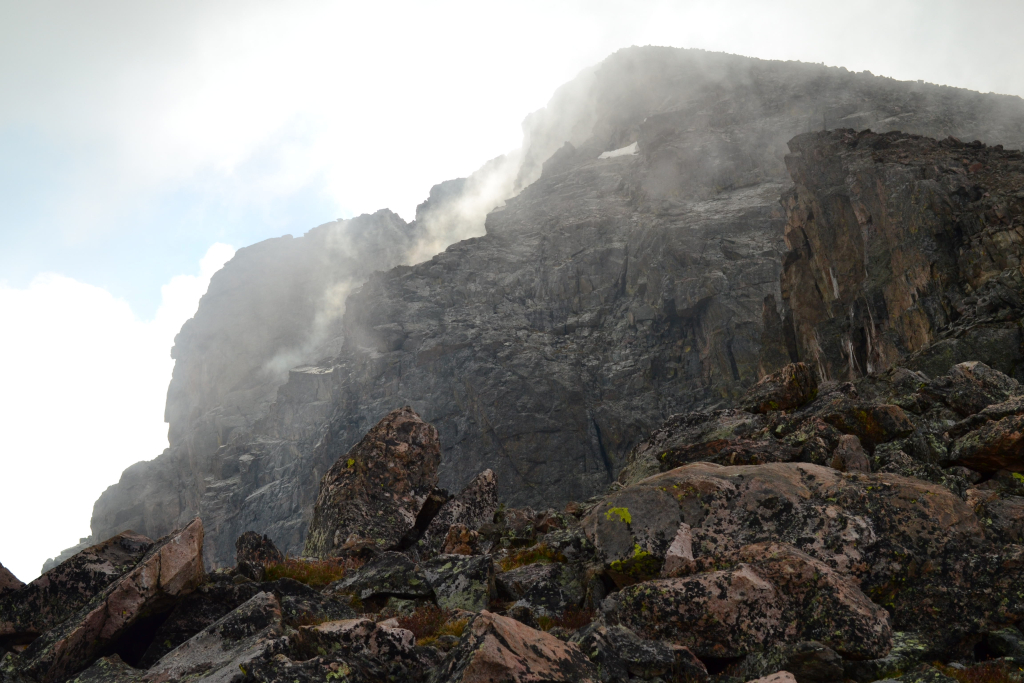 Just before the crux of the route we passed the Angelica Couloir on our left. There was no snow in the couloir at the time of our trek (August 28th), but this is probably a really great route when snow is present. After the couloir the trail ends, and the remaining route is a fun scramble through large talus. This is a good place to practice route finding skills as there are many ways to get to the top. We chose to veer more towards the right side to stay away from the steep drop off of the couloir. We scrambled up about 300 feet and joyfully tagged the summit marker. We were the only ones on the summit for about 20 minutes. It was mountaineering bliss. We set the camera up to autoshoot and took a few photos. The lake in the bottom photograph is the Bowl of Tears. This beautiful lake serves as one of the headwaters of Cross Creek and rests at about 12,000 ft. Fisherman take heed: sources say there are no fish in the lake. 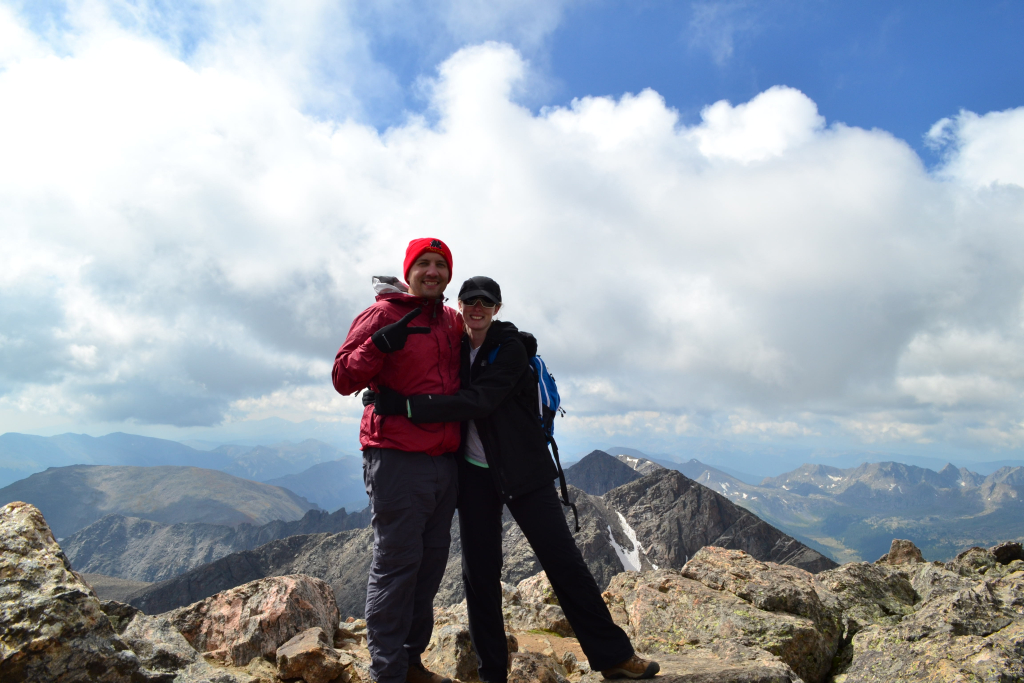 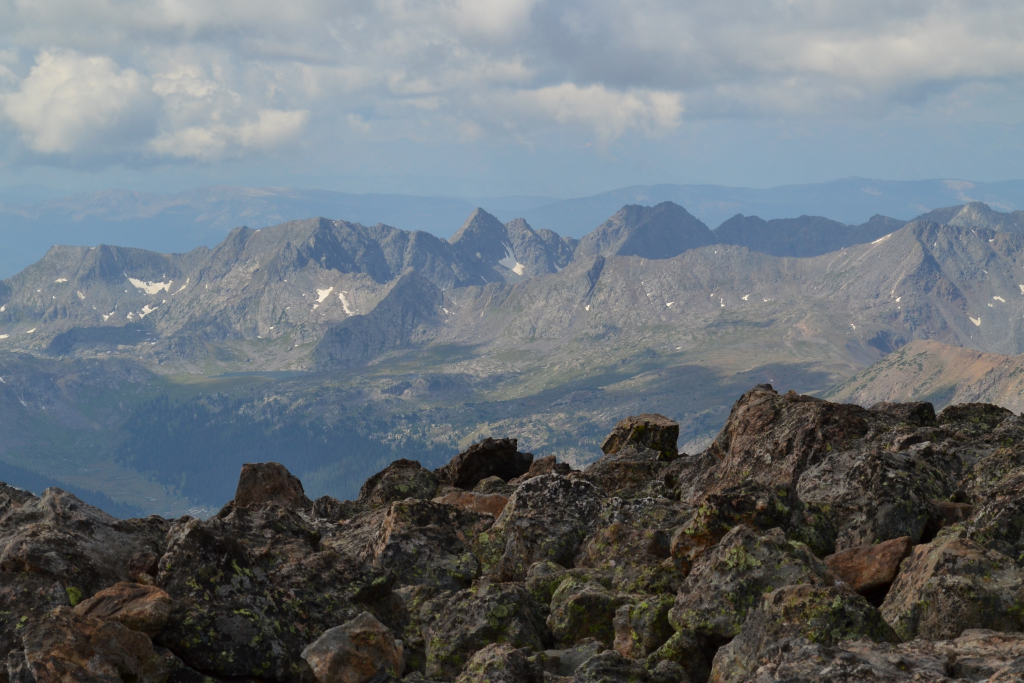 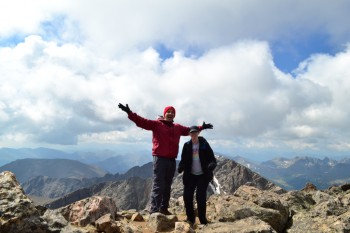 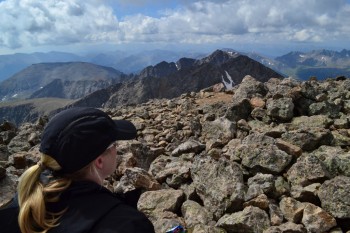 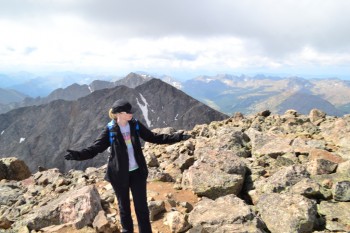 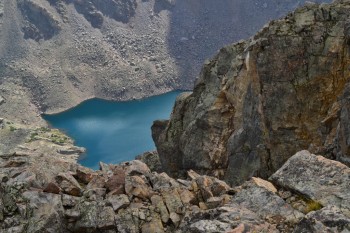 After spending about 30-40 minutes on the summit, we decided to head back down. This was the first time in a while that the weather was stable and beautiful allowing us to actually enjoy our time on top of the mountain. After much research and reading about various lost hikers, we were very cognizant of our route. Many hikers have taken the incorrect descent of Mt. of the Holy Cross. Instead of veering right and following the ridgeline some hikers miss the turn and head straight down the mountain which leads into a vast wilderness. There is also a cliff band in one spot. Quite honestly we were surprised this was a common mistake. We had no trouble finding our way back. On our descent we did take a route closer to the couloir to save time. Perhaps if we were really tired and dehydrated we could have made the mistake. We did study and plan the route really well prior to the hike and brought a map and GPS just in case to avoid any mishaps. Nonetheless, the sheer size of the wilderness area of Holy Cross is amazing. It would not be difficult to become lost or disappear if not properly prepared.

We took our time on the descent, enjoying the wonderful views the ridgeline has to offer. Directly across the summit and visible from the ridgeline is the semi-famous Notch Shelter located near the summit of Notch Mountain. It was built in 1924 as a stone shelter for visiting pilgrims to spend the night and awaken to the illumination of the cross come morning first light. Today it still stands though it is somewhat run down. It has been equipped with lightning rods to protect hikers on the ridgeline in the event of a thunderstorm. Camping is no longer allowed in Notch Mountain Shelter. The shelter can be seen distantly in the photograph below. 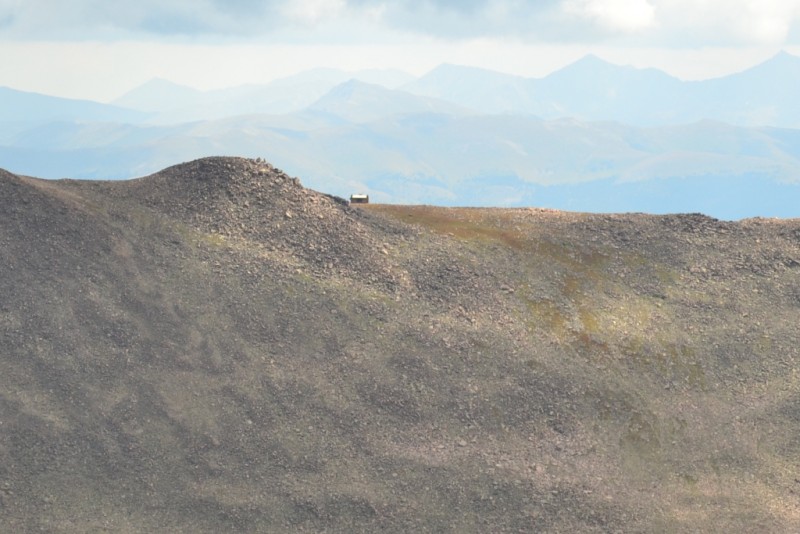 On our descent we encountered a few more hikers ascending, perhaps 8 total. Our early start let us have the whole mountain to ourselves for most of the day. This was the most isolated 14er we have done so far and one of our favorites. We took our time and relaxed on a warm sun-baked boulder on the way down. We refueled with some peanut butter and Gatorade. The sun still shone brightly and the sky was still peacefully blue. We crossed back over the creek and mentally prepared ourselves for the uphill climb back over Half Moon Pass. Contrary to logic, we hiked the quickest we had all day to get back over the pass. While it wasn’t exactly pleasant, it wasn’t quite as bad as most people make it sound. Seen below are photos of the climb back up and out. 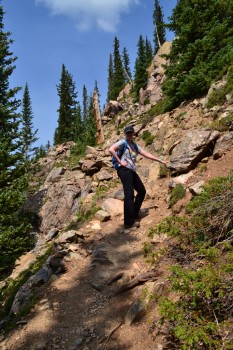 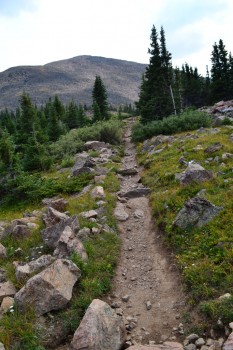 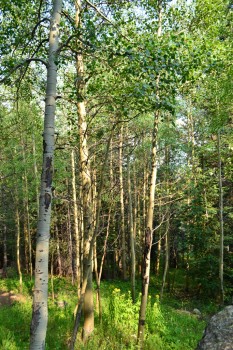 It was dark when we first climbed Half Moon Pass. Thus, on our return down to the truck it was like a completely new hike. We were greeted with beautiful meadows of wildflowers and lush greenery. 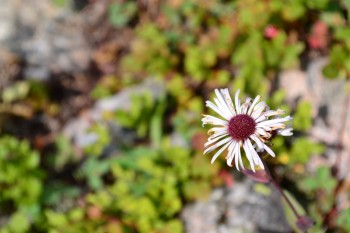 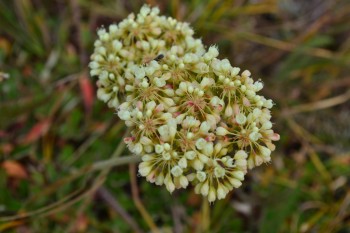 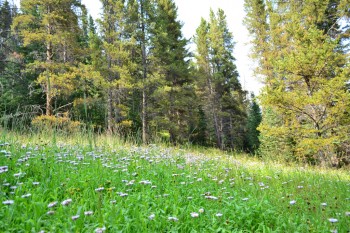 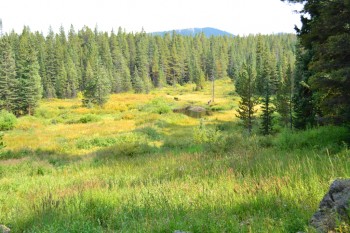 We reached the truck mid-afternoon and quickly headed into Minturn for an early dinner at Kirby Cosmo’s BBQ to celebrate. We had finally visited Mt. of the Holy Cross after 2 and a half years of talking about it. We completed the standard North Ridge route this time around. We are by no means done exploring this area. Next time we would like to try the Halo Ridge Route, or even just climb to the Notch shelter. There are so many hidden gems to find in Holy Cross wilderness beckoning the curious outdoorist to come explore.