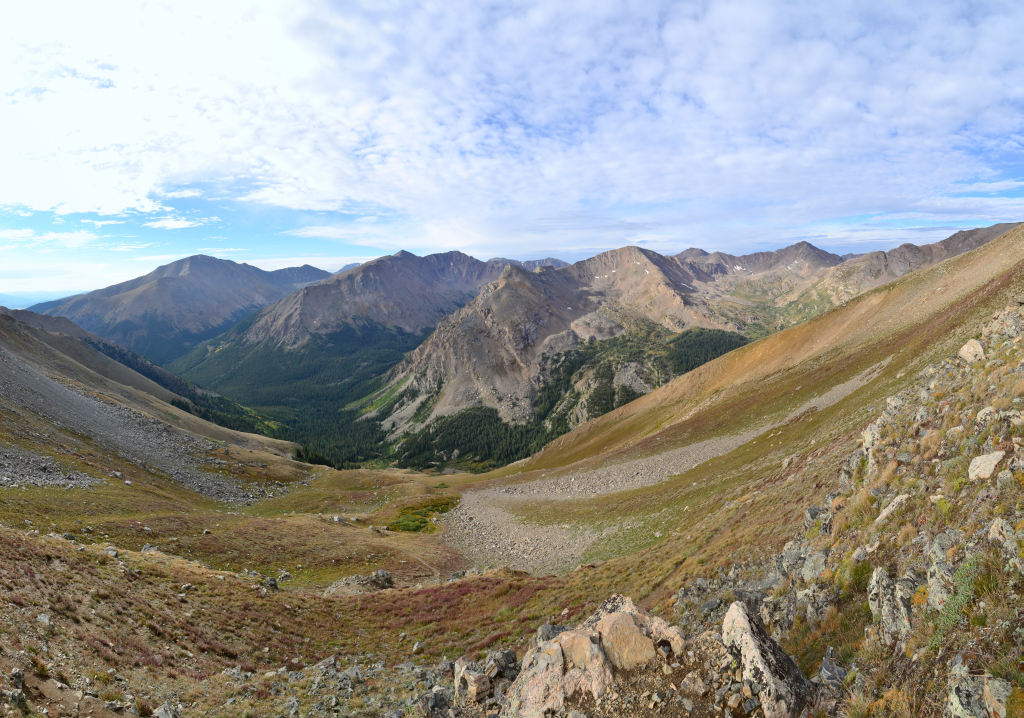 We drove once again into the land of the gentle giants a mere 6 days later to tackle our next objective in the Sawatch Range, Mount Massive. Massive stands majestically southwest of the little town of Leadville beckoning visitors and locals alike to touch her summit and rest a few moments in the third highest spot in the contiguous United States. Only Mt. Elbert next door and Mt. Whitney in California exceed her reach in the sky.

We began the trek with a Thursday evening drive into Leadville and fueled up at High Mountain Pies, a unique little pizza joint at 10,200 feet. We are constantly amazed that delicious food can ever be constructed at this elevation, but they have succeeded. After dinner, we were ready for the 30 min drive to our campsite near the trailhead after meeting up with our new hiking partner. This was a unique trip for us in the fact that we finally got to meet up with Spencer, founder of Mountain Obsession to tag a summit. Spence is on an over year long adventure trip living out of his car to explore and promote getting outdoors, being healthy and living a full life. We were pretty excited to get to share some of our backyard with him.

We set up camp near Halfmoon Creek about 2 miles from the North Halfmoon Creek TH which provides access to Mt. Massive via the Southwest slopes. We say set-up loosely as we car camped this time and forgot wood and chairs for a fire. Before it got dark, we wandered around near the creek and spotted a deer. Most of the time these guys are very skittish. Not this time. The deer followed us a bit and got a little too close for comfort. 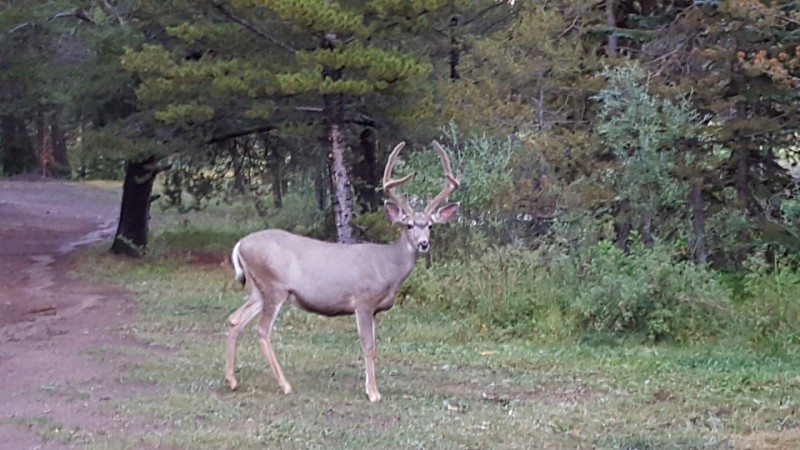 Sleeping in the X-terra was cramped and cold. The night felt long until 5:00 am came around, and we wished we had some more sleep time. Mountaineering is always more difficult than it should be due to the lack of quality sleep most summit attempts afford. As the year progresses into fall, we are left with dark cold mornings in the mountains. We used flashlights and car lamps to prep in the inky early hours. We had 2 miles of tough 4WD road to clear to reach the trail. It took us about 20 minutes to get there. We advise not to take a 2WD or low clearance vehicle up this path. There are a couple of gnarly spots in the last 0.5 miles that were tough even with a 4WD decent clearance vehicle (2012 Nissan X-terra stock). We reached the trail just as the first glimmer of morning light began to appear. A memorial to the fallen soldiers in the Black Hawk Helicopter  2009 crash into Mt. Massive solemnly stood at the start of the trek. 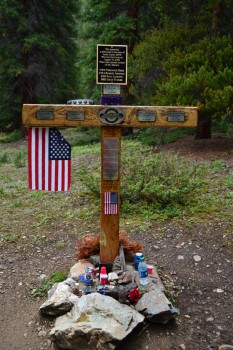 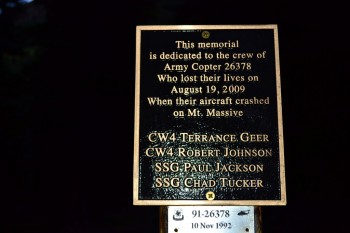 The trek to Mt. Massive via the Southwest slopes begins very gently, passing through dense forest and lush vegetation for the first mile and a quarter. Several rains in the area during the proceeding days made the trail moist and muddy in a few places. During the first mile or so we gained very little elevation, probably only around 300 feet. There is a trail junction right after exiting the forest that leads into a meadow. Continue on the trail veering right (north), not left into the meadow. Heading left continues on to the North Halfmoon Lakes. The way leading up on these trails is almost always correct. Alpenglow was abundant as we edged the meadow and began to gain elevation. 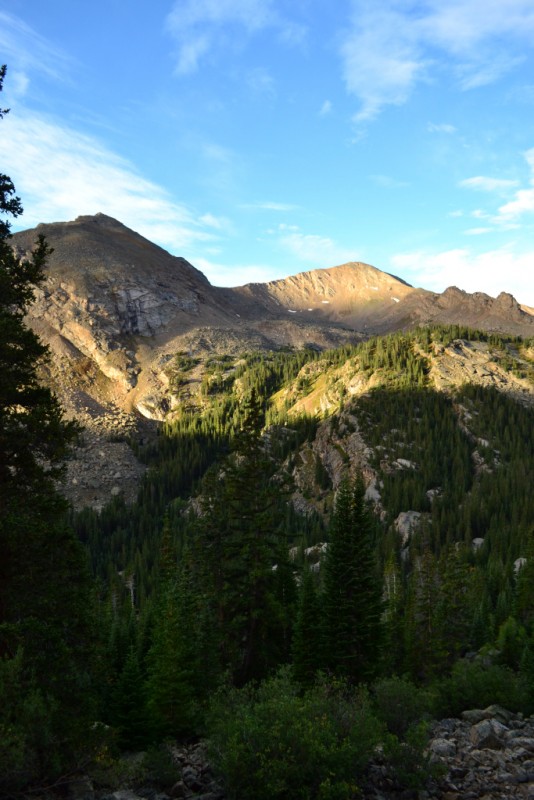 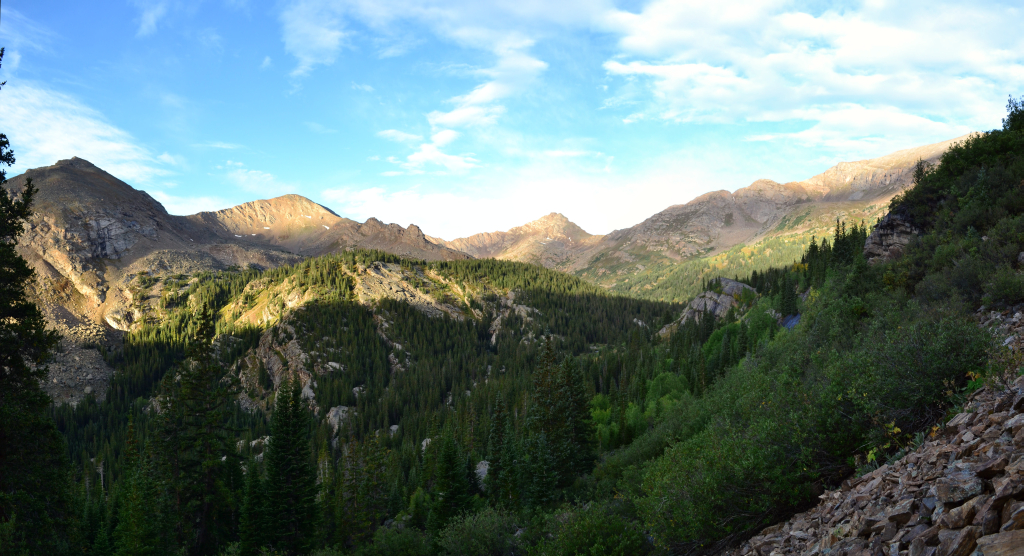 Elevation gain began to get serious after the passing the meadow. We hiked vertically through a boulder field most of which provided decent stone steps. Although there were short bursts of loose scree in between the sturdy rock. The trail is a bit less apparent through here, but we had no real difficulty finding our way. Boulder fields continued until about 11,800 feet. We then proceeded up even steeper grades of trail in a grassy open area. The gain was brutal, but we had amazing views of the creek and surrounding valley below. A ptarmigan posed for us on a ledge. These guys are really difficult to catch a glimpse of due to their amazing camouflage. 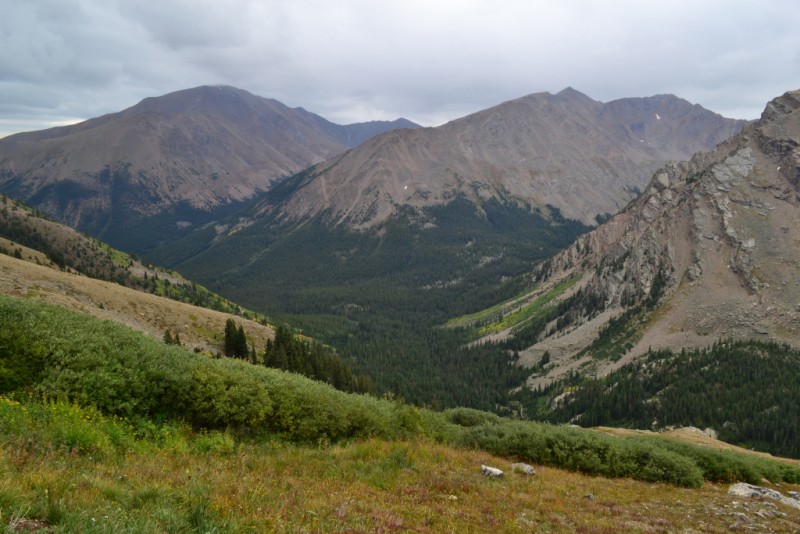 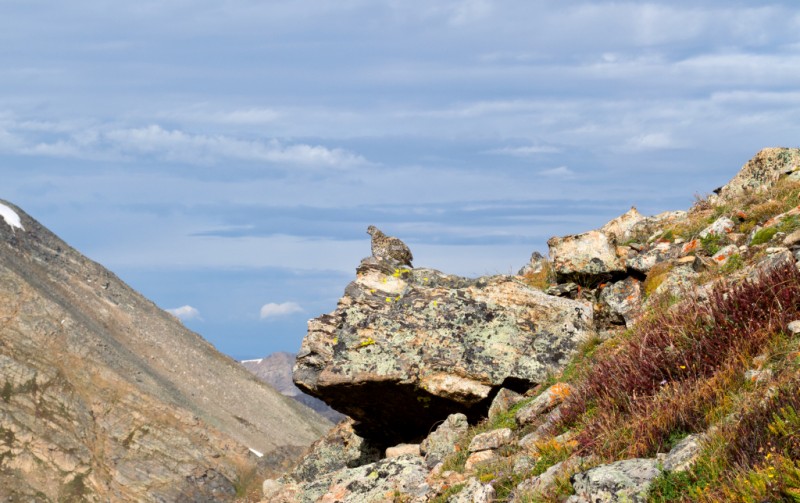 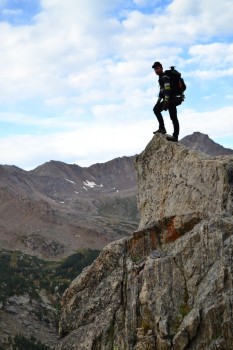 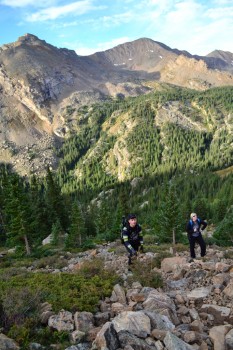 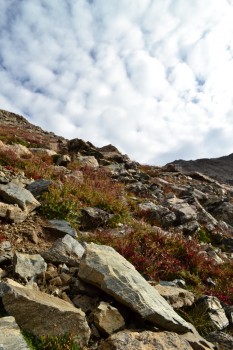 We approached our first false summit at close to 14,000 ft. We were thrilled to be close to the summit ridge. Even though we were above 14,00 feet we were still not on Mt. Massive’s true summit. Massive is large and deceiving. There are many false summits on this large mountain which cloak her true summit. We continued up and around a corner before the summit ridge came into view.

On the ridge the solid trail turns into some fun class 2 scrambling. It was very easy but really fun and more interesting than the long slog we had just endured. We climbed up a false summit that we originally thought was the highest point. We stood with two other hikers pondering this for a moment. Our GPS read 14,412 feet so we knew we needed to keep moving and tag the next point over. The final push seen below. 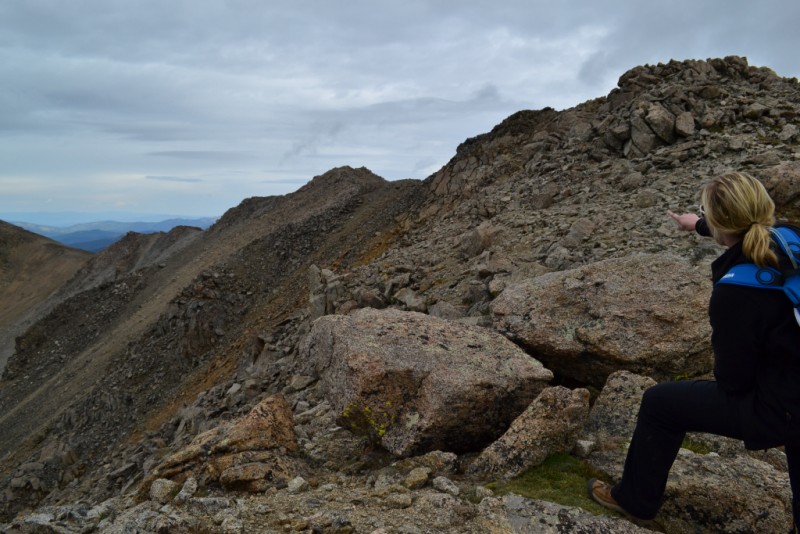 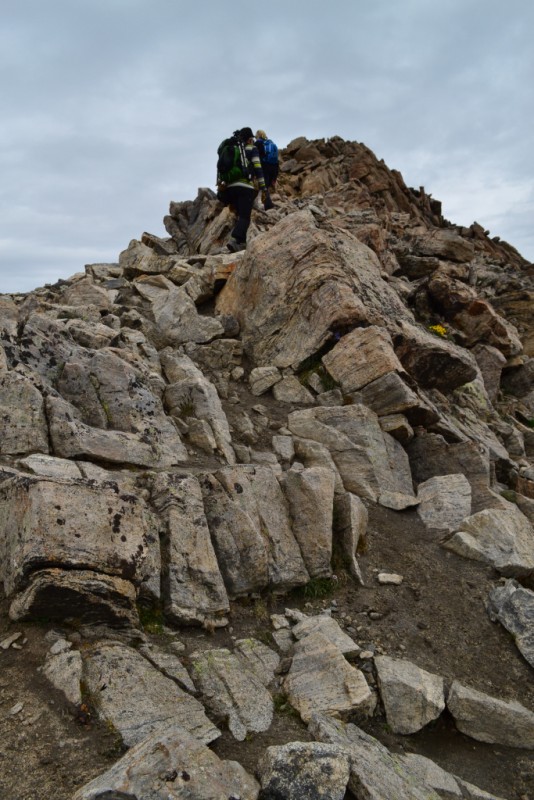 A few minutes later we tagged the summit. A lone hiker was resting on the summit with an Ohio University banner. She said she meant to climb Mt. Elbert that day but ended up at the wrong trailhead parking lot and said “oh well, I’ll climb Massive.” We were impressed since the Mt. Massive hike is a bit more strenuous and a much longer day than Mt. Elbert. There are some spontaneous and tough people in this state for sure. We enjoyed 15 minutes of relaxing, eating, and chatting before it started sleeting/snowing. The weather in Colorado is completely unpredictable. There was no rain or lightening which is an added benefit to hiking later in the summer season. We all had water proof shells and gloves and were good to go. 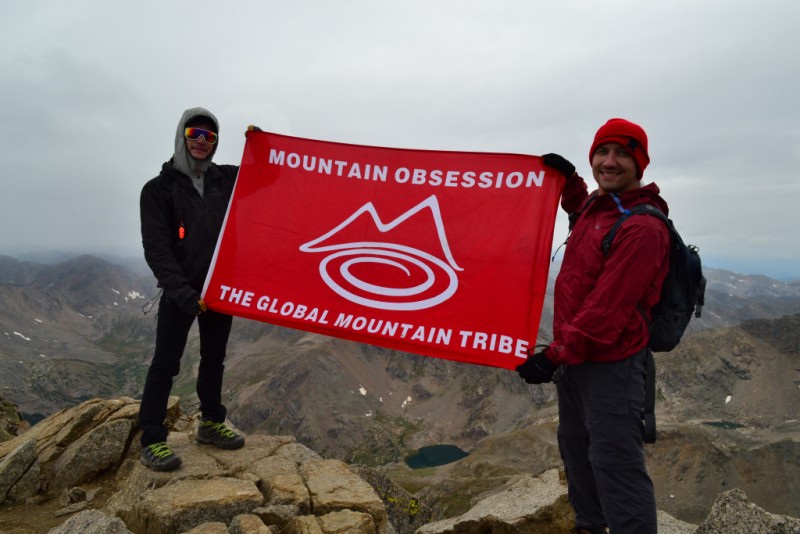 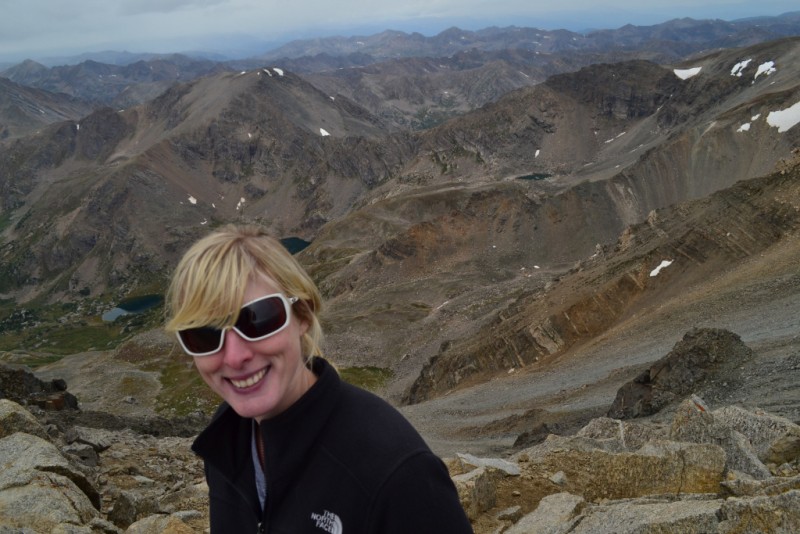 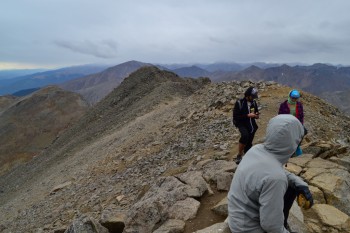 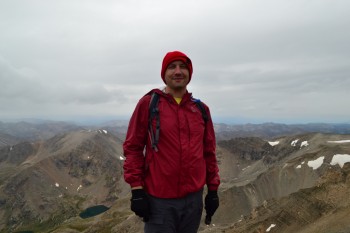 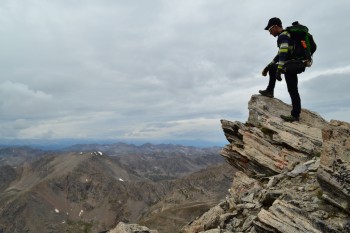 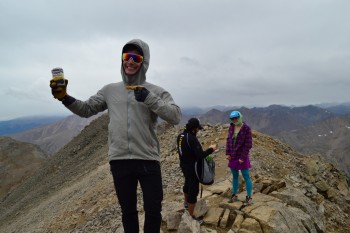 While frolicking across the ridge line was fun, our steep descent past the summit ridge was tough. Downclimbing 35 degree vertical scree is rough on the knees. Nonetheless, the Sawatch Range is so beautiful and impressive that it takes away from the discomfort. It is easy to inherent a powerful sense of human insignificance standing among the voluminous rock. Though surprisingly it tends to be more comforting than not.

“Mountains inspire awe in any human person who has a soul. They remind us of our frailty, our unimportance, of the briefness of our span on this earth. They touch the heavens, and sail serenely at an altitude beyond even the imaginings of a mere mortal”
Elizabeth Aston in “The Exploits & Adventures of Miss Alethea Darcy: A novel,” 2005.

As we approached the meadow and forest leading to our exit, we heard a voice call out from the reeds and willows. The voice called “hello” and “where are you?” and ask if we were heading on the proper trail to get out. Another testament to how easy it can be to become lost or disoriented on the trail if dehydrated and tired. She must have taken the junction to the North Lakes on her way down by mistake. After providing some direction, we whipped through the remaining 1.5 mile trail through the woods and made it back to our car. We after all had to get back to Denver to watch our Rockies take on the Giants.

All in all a good summit day. Here are a few parting words of advice if you plan to take the southwest slopes.