We decided to hike McCullough Gulch again, but this time with different company: Thomas’ Mom.  Last year we hiked McCullough Gulch on a trip for Allyson’s birthday and the trip report can be found here: McCullough Gulch 2014.  This year’s hike brought new adventures and excitement.

The hike itself is roughly 2.7 miles RT to the Blue Reservoir, but it can be longer or shorter depending on what you want to do.  At the trailhead the trek begins at roughly 11,102 ft and at the lake the elevation is approximately 11,936 ft, all according to our Garmin GPS, for a net elevation gain of about 834 ft.  It is a short and easy hike relative to it’s neighboring hike of Quandary Peak, which looms next door for the entire jaunt of McCullough Gulch; but is still above 11,000 ft and there are some rocky and steep areas making it not a walk in the park.

The hike begins with an 18-20% grade up an old mining trail.  There are views along the beginning to be had if you are looking to take your time, which we were.  After passing an abandoned mining area there is a natural scenic overlook formed by an outcropping of large boulders.  We stopped here for a photo-op and to enjoy the scenery.  Below are some of the images from the scenic overlook and the initial start of the hike. 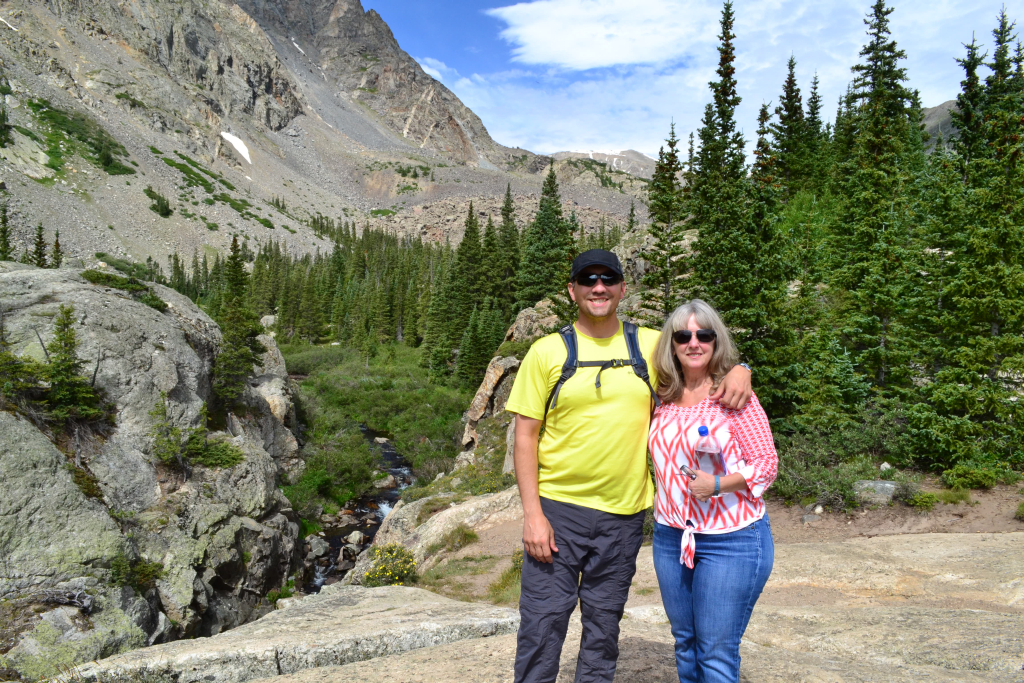 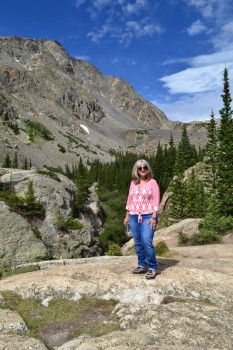 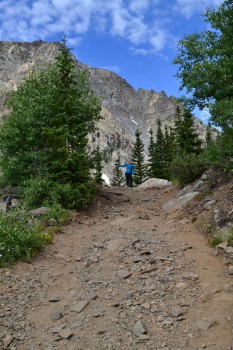 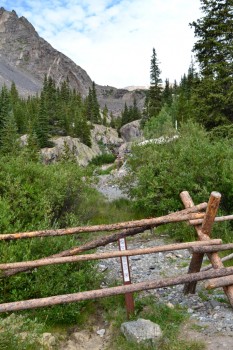 The hike continues to rise until about 2/3 of a mile and then flattens out a bit as the trail narrows through pine trees.  Mom started to notice that outer-sole of one of her boots was coming off, which was not ideal.  Her boots were a bit old according to her, perhaps 18 years old.  Eventually, the outer-sole of the boot did come off completely, and she walked more than half of the hike on the mid-sole of the boot.  Lesson learned:  check your equipment before you hike!  Below are some pictures of the flat section and of her boots. 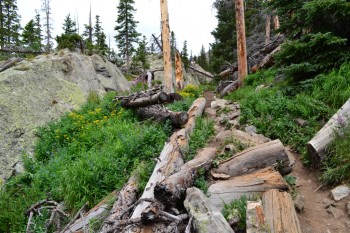 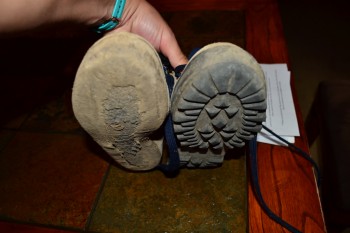 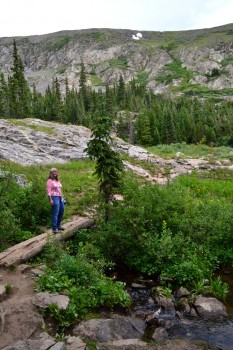 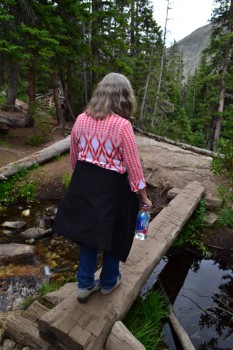 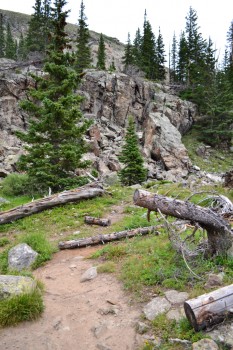 After going up for a little while you reach a small talus field, which has a nice, clear path leading through it.  Just after this is a small single beam bridge over a creek (pictured above bottom left), and just after this bridge you reach a crossroads.  You can either continue making your way up to the Reservoir by veering to the right, or take a small detour loop to the White Falls by aiming to the left.  We wanted to see the Falls — because they are really very majestic — and so we took the quick detour.  Some pictures of the Falls are below. 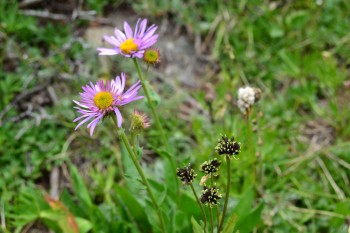 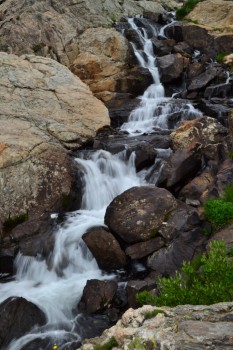 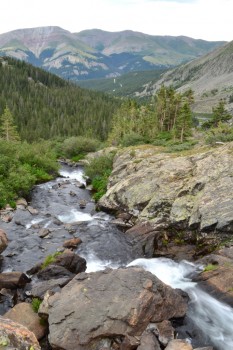 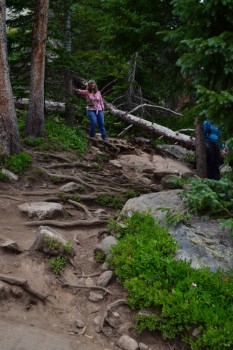 The Falls trail loops back around rejoins the McCullough Gulch Trail shortly after the falls and the trail begins to steeply rise again towards the Reservoir.  There is only about a third of a mile from this point to the Reservoir.  Along the way you can see Quandary Peak looming to the left along with an array of gorgeous wildflowers.  The rock can be a little loose and it is important to watch your footing here, especially if you aren’t a regular hiker; but the goal is just around the corner.  Mom was having some trouble here on some of the rocky parts due to her outer-sole coming off and having very little grip on her left foot.  This tells us that having shoes with good grip, either trail running shoes or hiking boots, are nice to have for this hike.  Below are some pictures from this portion of the journey. 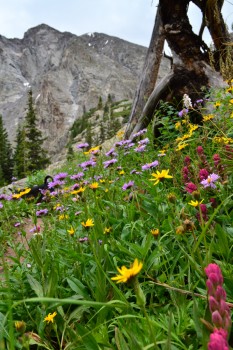 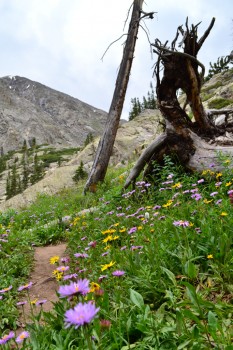 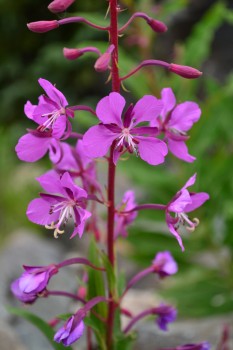 After one last push up a rocky portion of the hike the view of the Reservoir appears and you have made it.  As you approach the lake there are at least three options to be had, not all exclusive to one another.  There is an option to take a left turn and hike across the outflow of the Reservoir, a small creek pictured below, and onto a hill on the Quandary side of the Reservoir.  This area gives great views of the Reservoir and is often inhabited with mountain goats.  In fact, the day we went there was a herd of mountain goats on the hill with a baby mountain goat in tow.  It was really awesome to see the mountain goats, and especially the kid.

Mountain goats are typically not aggressive to humans, but there have been attacks on humans and at least one fatality.  See this article from Backpacker.com about a man who was gored by a mountain goat in Olympic National Park.  Even so, it is never wise to approach wild animals and it is illegal to feed any wild animals.  It is in everyone’s best interest — hikers and animals — to keep a safe distance from wild animals.  Below are some pictures of Blue Reservoir and the mountain goats (for reference I used 200mm lens and cropped the resulting images for the mountain goat shots). 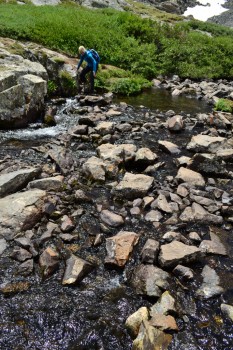 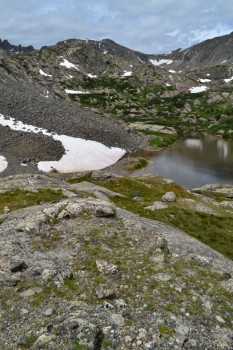 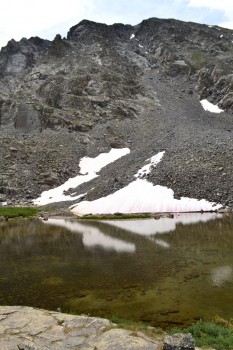 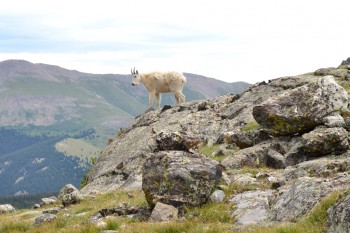 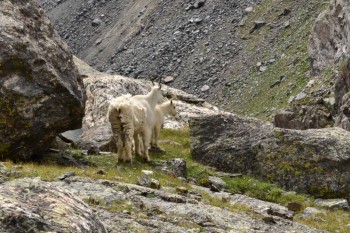 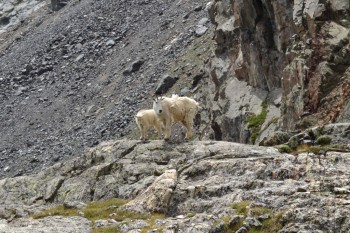 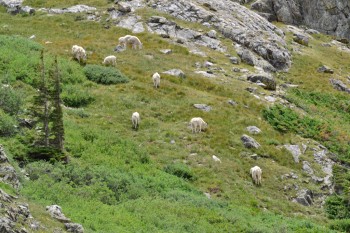 The hill also lends itself to taking a nice panorama of the cirque and Reservoir, which we did!  Mom stayed on a rock and had a nice time refueling and enjoying the scenery while we explored the area.  In fact, if you click on the image below, and zoom on the large rock on the right side of the Reservoir you can see a person wearing a black jacket, that is Mom!  What is also nice about the image below is that you can see the path leading up to that large rock.  If you so desire, you can keep following that path past the Reservoir and towards a group of three lakes higher up (the path is visible from Google Maps).  If you choose to explore these upper lakes, be aware that it turns this hike into a 6 mile RT hike from a 2.7 mile RT hike.  As far as I know these upper lakes are not officially named. 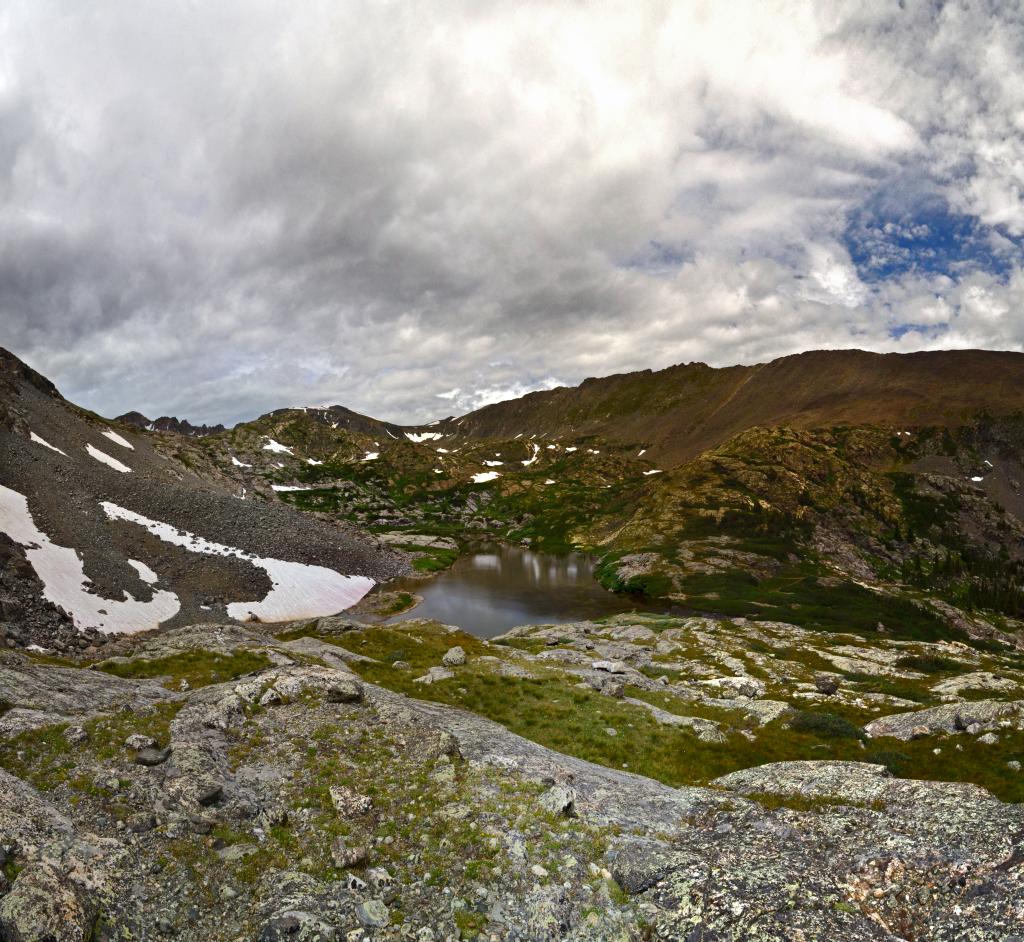 The hike back down was pleasant, but the mosquitoes were out and that kept us moving.  We would recommend bringing spray to keep the bugs at bay.  This is a very nice hike, especially for beginners, and can be used as a trail run, which Thomas did the following day.  It is a very versatile trail, and you can spend well under an hour running the trail to a half day exploring and taking pictures; to top it all off it is next to the very friendly town of Breckenridge, where we spent the remainder of our excursion.

Photography and writing by Thomas Checkley