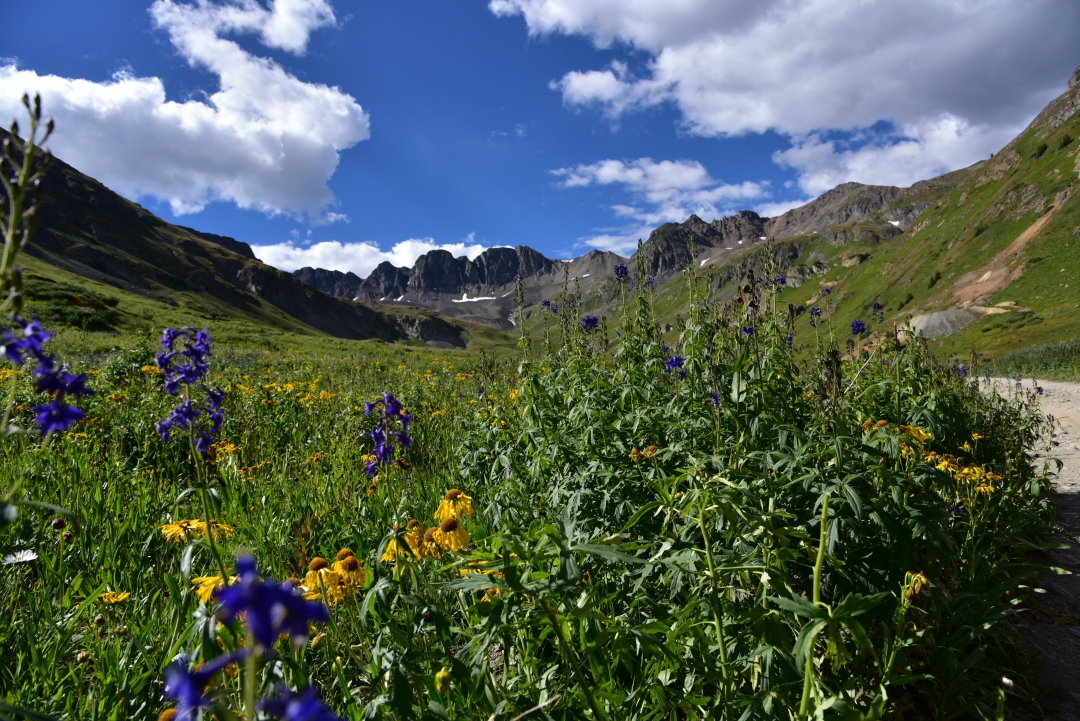 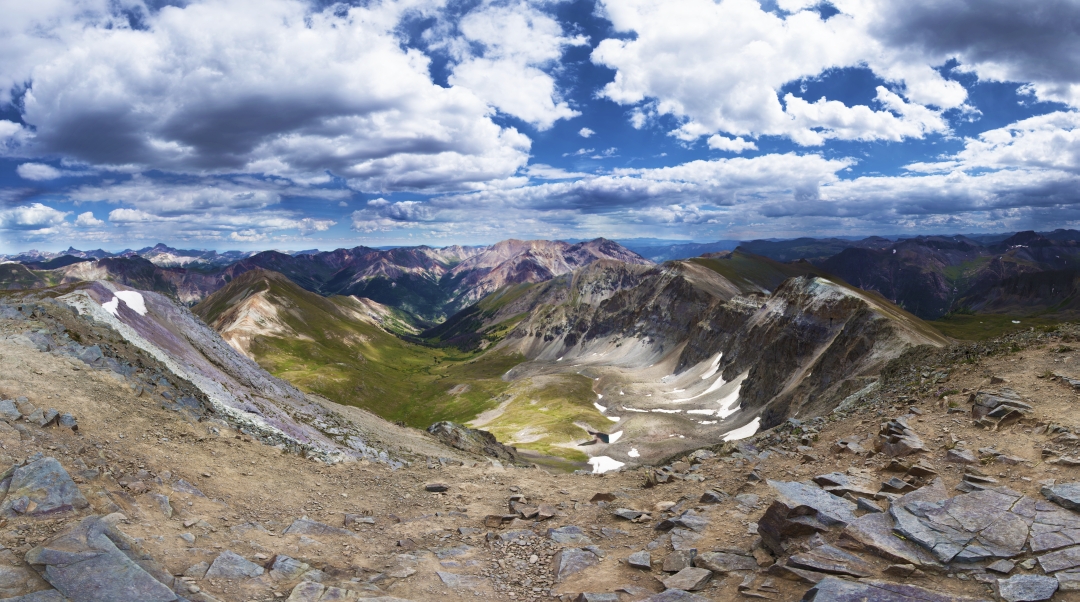 As part of our trip to Lake City in late August, we also reached the summit of 14er Handies Peak via the stunning American Basin. This time, we opted to leave a bit later in the morning in our summit attempt, as the route up Handies via American Basin is a much shorter, class I jaunt. Plus, our exciting class III scramble up Wetterhorn the previous day had left us a little bit exhausted.  We left our Cabin in the light of morning this time, and set out on the Scenic Alpine loop to reach the trailhead. Per the detailed instructions on 14ers.com, we followed the road past San Cristibol Lake and then took the fork towards Cinnamon Pass.  We had no idea that the adventure was going to actually start there, up that steep rocky road. We quickly gained elevation when the road forked. Dirt-bikes and ATVs flew past us, seemingly unnerved. If our ride were a bit smaller, I’m sure our confidence would have been just as high, but we were in the X-terra. As the elevation gain ceased, we realized that we were on a narrow, shelf road. Thankfully our current direction of travel allowed us to hug the side of the cliff, but the sheer drop offs on the left still left us tense. We prayed that another car would not turn the blind corners during this stretch.  After a mile or so of intense sketchiness, the 4WD became more tame. Our truck now easily bumped along, passing the RedCloud and Sunshine 14er THs before getting closer to American Basin. We continued along this easier portion of the road for another 9 miles or so until the road forked to Cinnamon Pass on the right, and American Basin on the left. The truck took us about halfway to the upper 4Wd parking lot.  At this point, we were incredibly anxious to get out of the vehicle. The magnitude of American Basin’s beauty mesmerized us, and we wanted to hike in this spectacular place as soon as possible. 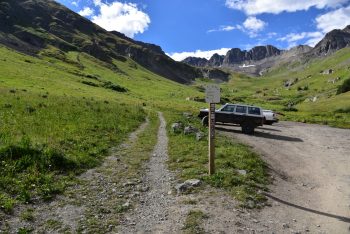 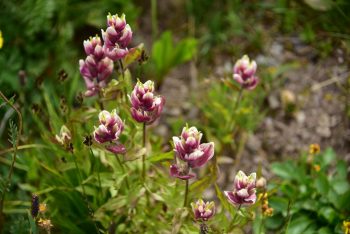 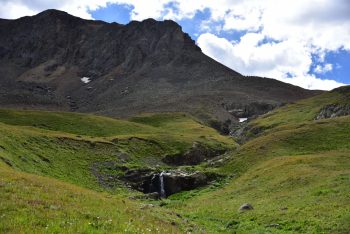 Even though it was late August, there was still a number of wildflowers in bloom in every color imaginable. We soaked in all the brilliant colors, as we hiked about half a mile to the upper parking lot and official start of the trail. From here, the total elevation gain is only 2,500 feet in a round trip of 5.5 miles. The trail steadily gains elevation here among throngs of flowers, almost as tall as we are.  Looking ahead, we were provided impressive views of the jagged ridgeline in this glacial carved basin. The incredible scenery was enjoyed in almost solitude. Despite, it being a Saturday on an easier 14er, the trail was generally empty. 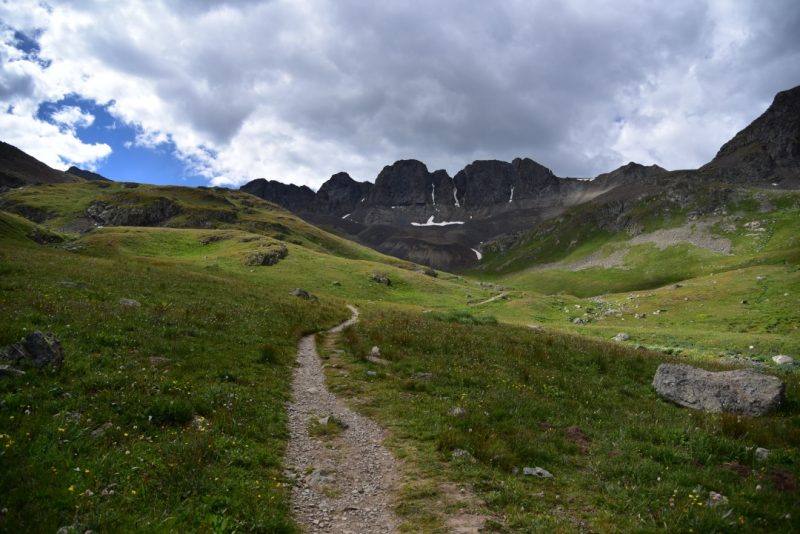 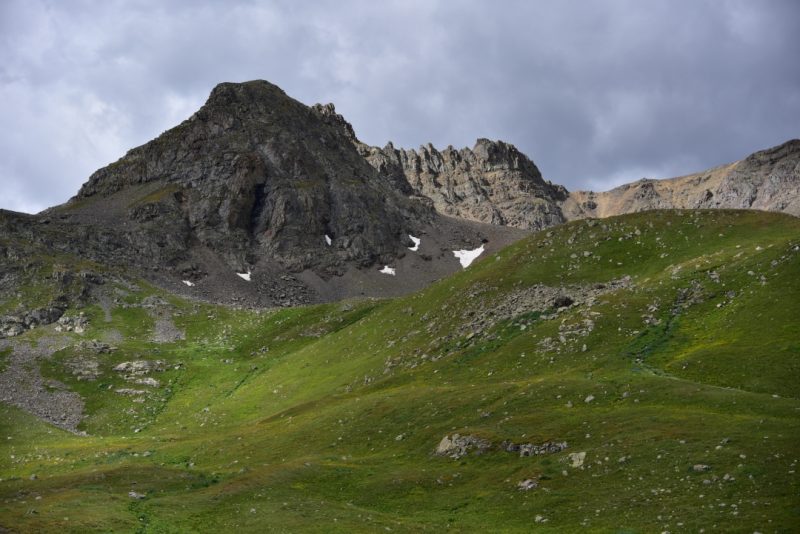 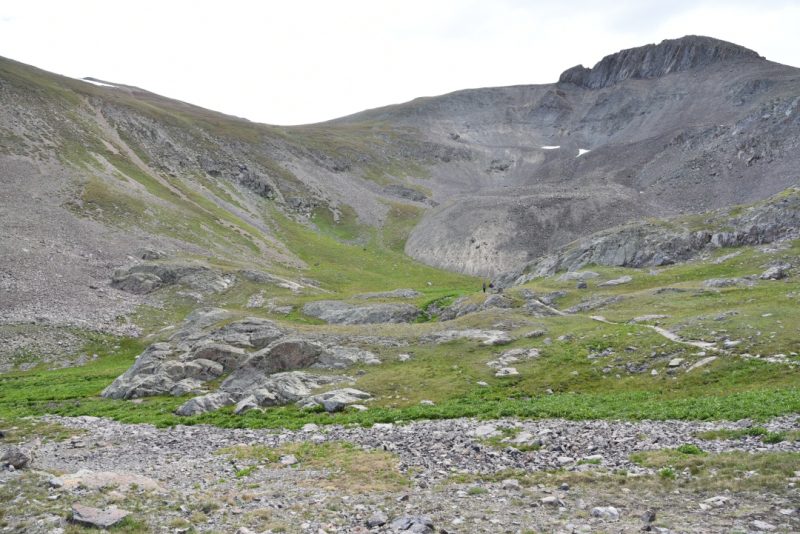 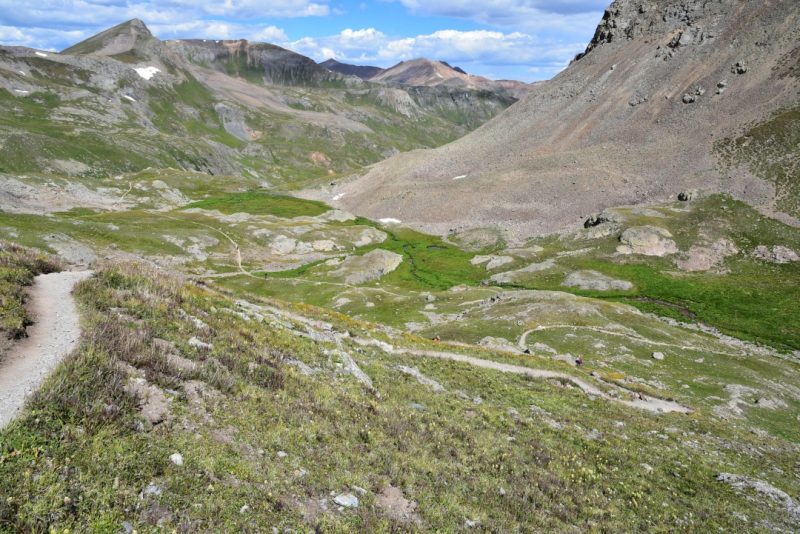 Aside from the outstanding beauty from the very second you reach American Basin, the first spectacular objective to see on this hike is Sloan Lake.  After just 1.5 miles, a short social trail appears on the right that leads to the banks of this alpine wonder. We took a quick break at the banks of the deep, dark blue water to eat a snack and relax. This is truly, one of the most amazing places in Colorado we have ever been. All of the views were so dramatic. Standing on the banks of the dark expansive pool, we felt so small. The jagged granite towered above us. It was time to continue to the summit. Most of the remaining route was visible now, in the form of a faint line of switch backs drawn across the side the mountain. On other days, this would have been an easy ascent, but our legs were heavy from Wetterhorn. The remaining route felt physically hard, even though this is considered one of the easiest 14ers in Colorado. 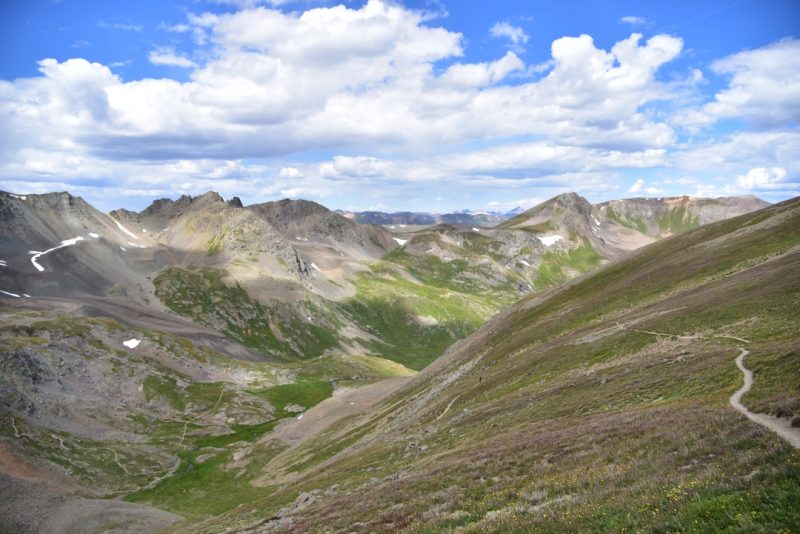 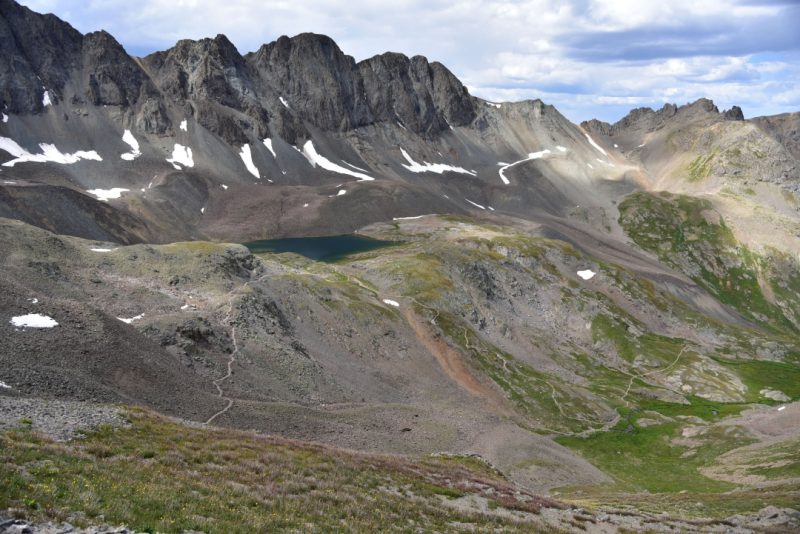 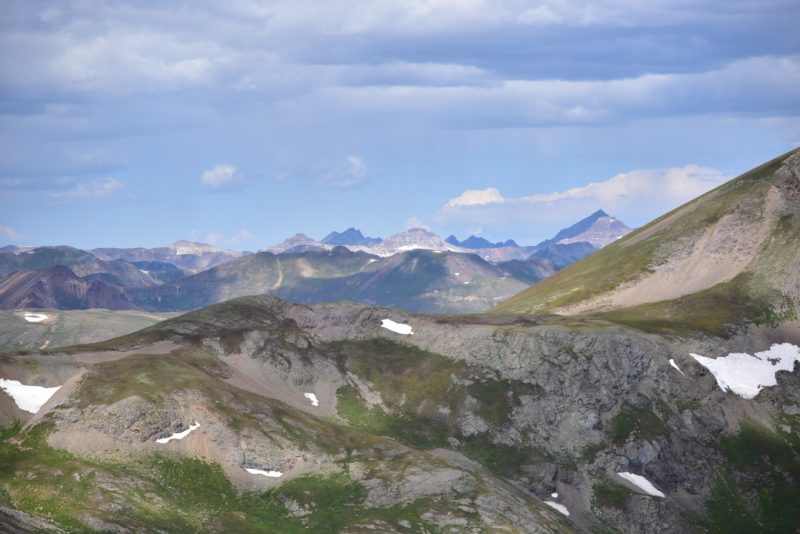 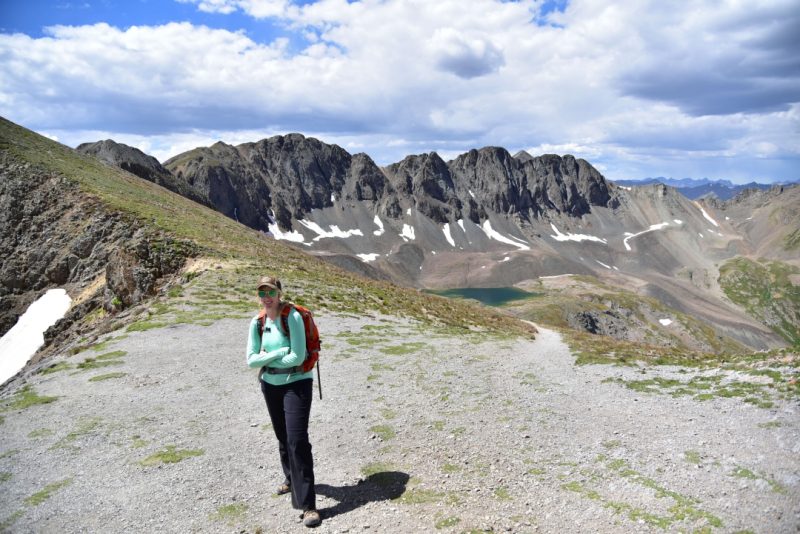 The higher we climbed, the looser the trail became. The final push to the summit was very steep and full of scree just waiting for us to make a mistake and slip.  The lack of available oxygen to breathe was more apparent today than the previous day.  Never did we anticipate that reaching such an easy summit would bring us such joy. We could now rest our legs for a while and soak in all the beauty. We shared this popular summit with just two other hikers for a few minutes in the late morning, and even had it to ourselves for a bit. The panoramic view from the summit included the Grenadiers and Needles Mountains to the Southwest and Wetterhorn and Uncompahgre  Peaks to the North. Seen below are photos from the top of Handies. 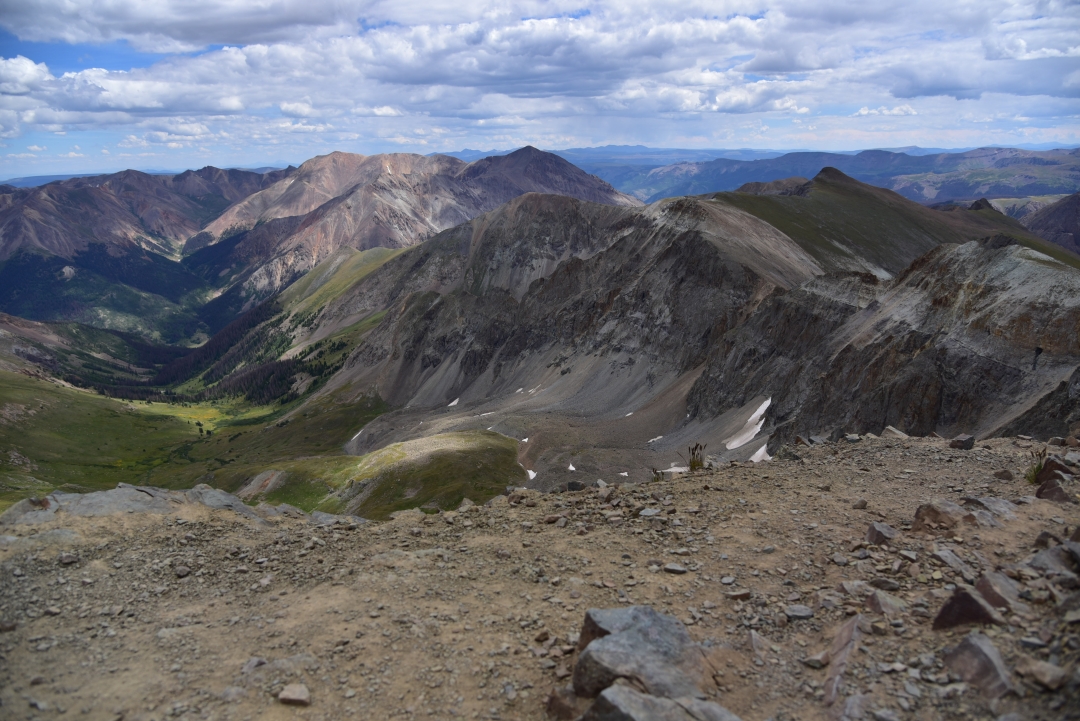 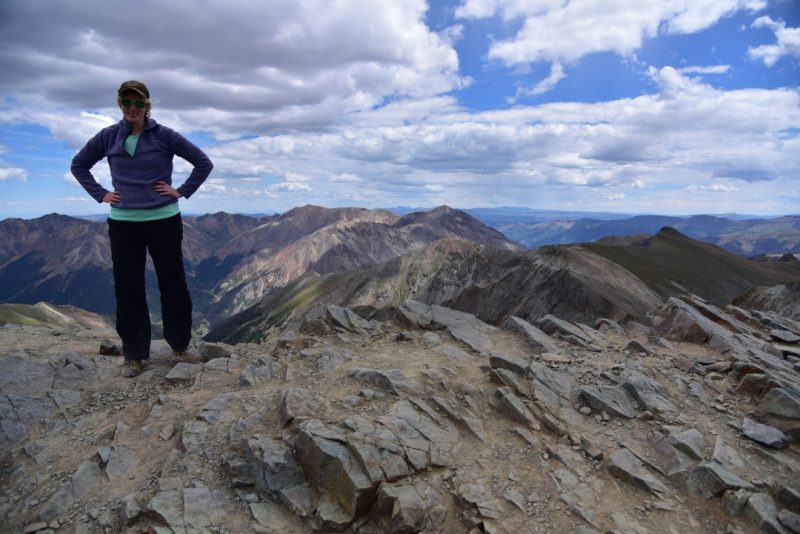 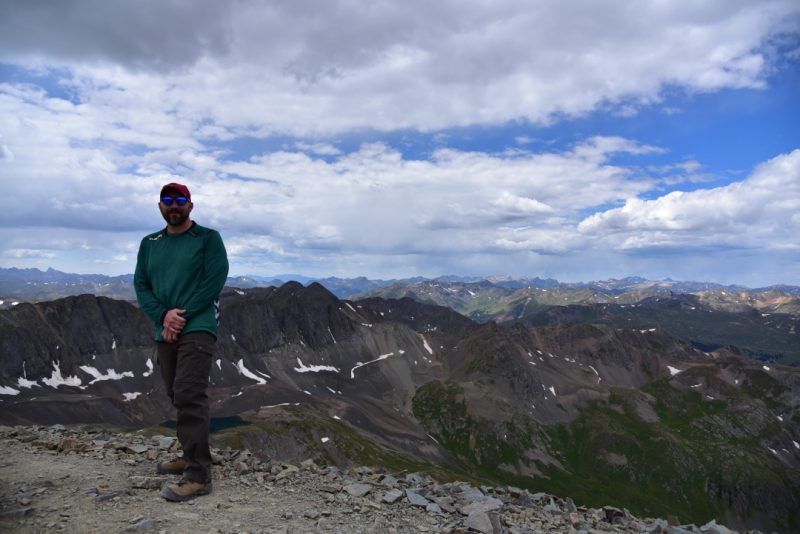 Rained looked inevitable, so we decided it was time to descend. The climb down was a bit difficult until the scree mellowed out closer to Sloan Lake. Once to the lake, we made quick work of the hike back to the car. When we reached the upper 4WD parking lot, we realized the rain clouds were just teasing us. The sky once again returned to a perfect blue, a perfect accent to the emerald green expanse of the valley below. When we reached our truck, a group of fellow hikers were nearby and offered us some of their watermelon, which turned out to be probably the tastiest watermelon we have ever had the opportunity to eat. There is nothing quite as satisfying as the crisp, coldness of this sweet fruit after 7,000 feet of elevation gain in two days.  Though it was tempting to stay in the beautiful basin for longer, we needed to start the long 20 miles back to Lake City. We still had the scary shelf road to travel on before we could breathe a sigh of relief and feel truly accomplished. To our surprise, the road was much more crowded in the early afternoon. Several ATVs and other vehicles shared the road with us. As expected, the shelf road was intense, though not as bad as it seemed on the way up in the morning. There is some benefit to knowing what to expect to help ease the nerves. In fact, we even filmed it this time which can be viewed via this link.  We reached Lake City in time for a delicious dinner at none other than the Cannibal Grill and Packer Saloon. (we got salad and pasta…).  Another outstanding day in the San Juan mountains was complete. 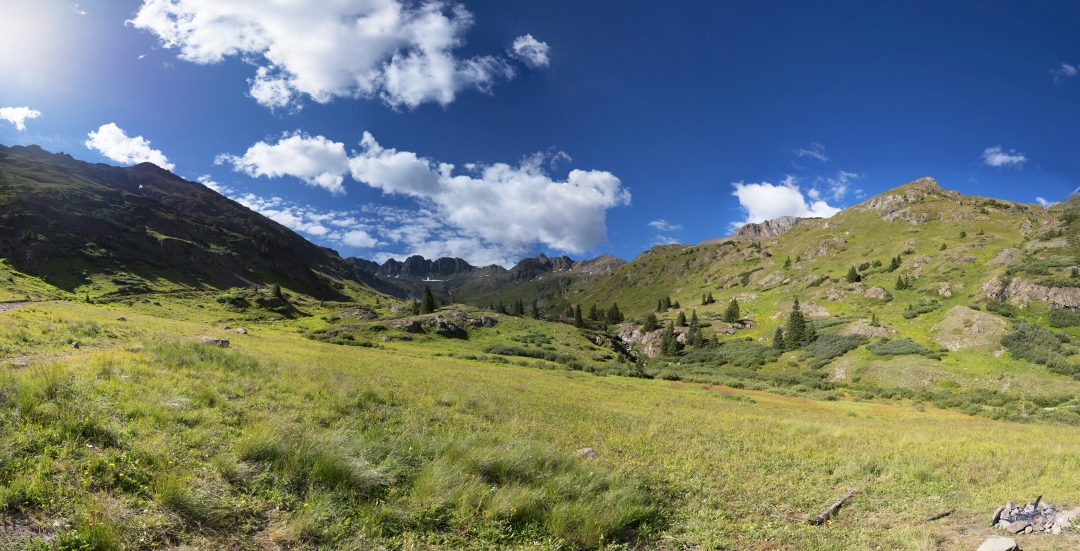