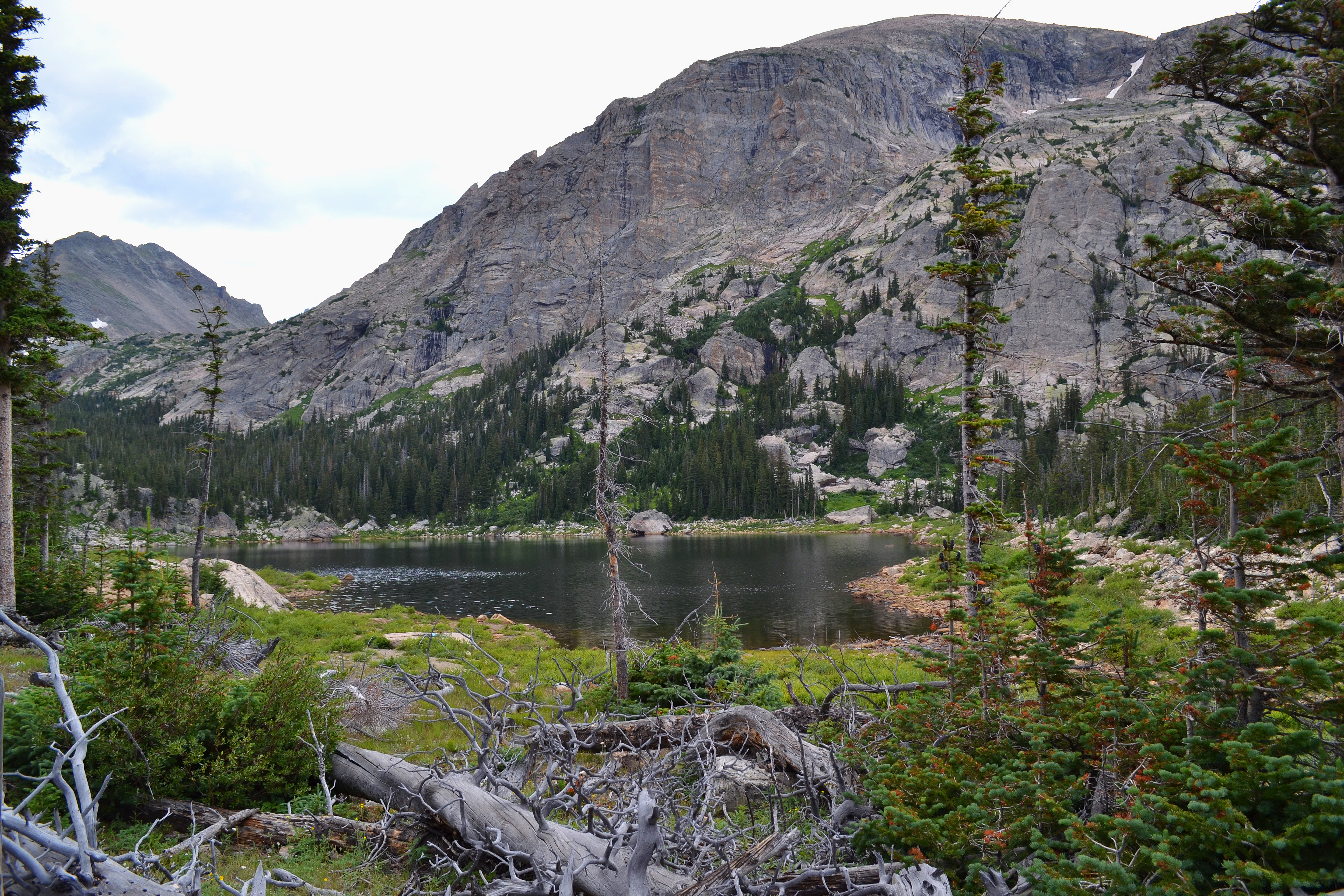 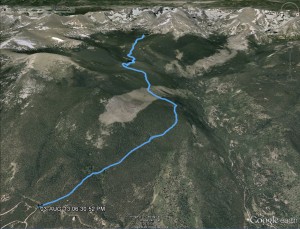 While torrential downpour flooded plains and mountains alike and funnel clouds were spotted sporadically above Boulder and Denver on Saturday, we somehow found a refuge from all of the terrible weather during a hike through Wild Basin of Rocky Mountain National Park. While we had planned for a car camp on Friday night and a summit attempt of Bierstadt early Saturday morning, weather predictions of isolated thunderstorms thwarted our well laid plans. A last minute visit to weather.com, showed us clear skies for most of the afternoon in Allenspark, CO near Wild Basin so we packed our day bags and headed up to our favorite piece of Colorado. Instead of entering Wild Basin through the Main Entrance right off of 7, we opted to give the Allenspark Trailhead a go to avoid the crowds. The trail entrance can be found in Allenspark right off of Hwy 90 via business route 7. The tiny trailhead offered room for only 7 or 8 cars and was nice to have 4 wheel drive to access (very deep ruts). The well maintained trail began with a gradual climb through a dense forest full of firs and lodgepole pine. For the first 0.8 miles, the mountains were hidden by the dense forest. However, we saw quite a few beautiful vegetation and interesting fungi, some of which included the deadly fly amanita mushroom. We also ran into a park ranger leading llamas down the trail. Seen below are photos of this odd first part of our trek. 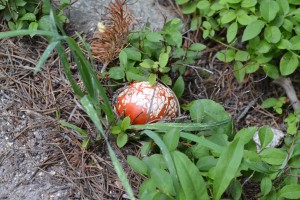 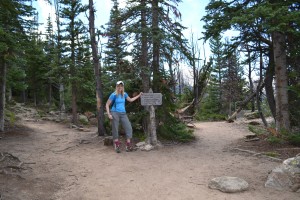 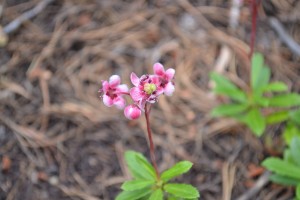 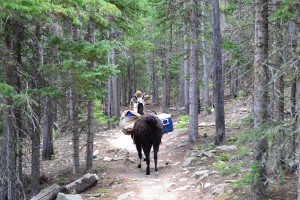 We then quickly reached the trail Junction which gives the option of continuing west to Finch and Pear lakes or north toward Calypso Cascades. We were in the mood for a less crowded hike and headed for the more isolated lakes. The next 2.2 miles or so led us through more dense forest and continued to climb. Eventually the forest thinned out a bit from a fire back in 1978 giving ways to exquisite views of the mountainous terrain. Wildflowers of many different shades and colors also lined the trail providing a beautiful array of colors with a blue bird sky as the perfect backdrop. Seen below are photos from the Finch Lake Trail. 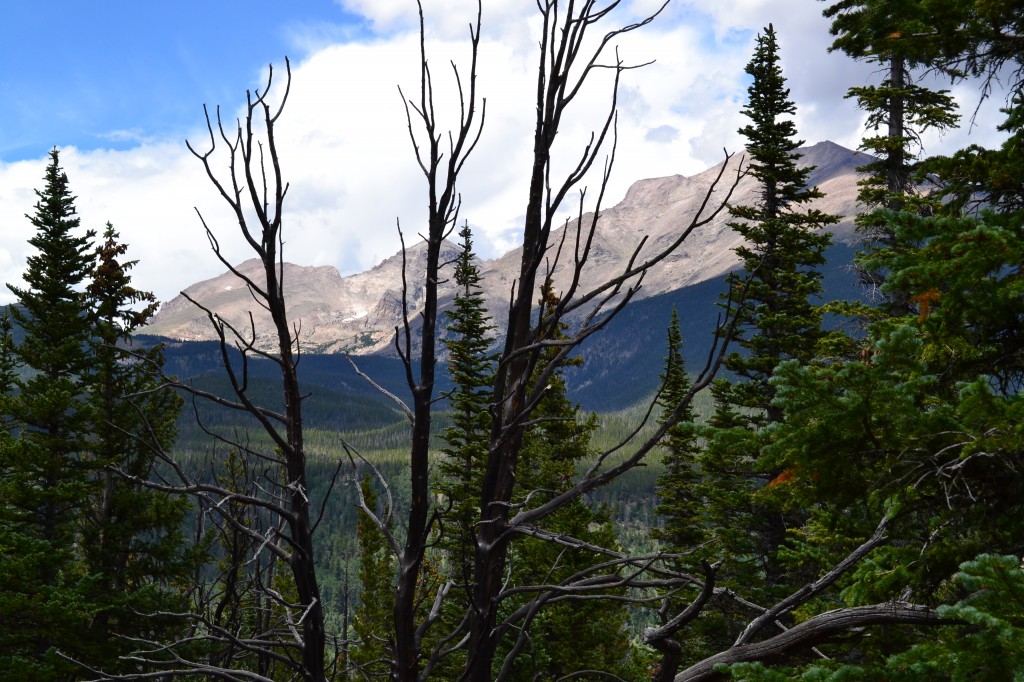 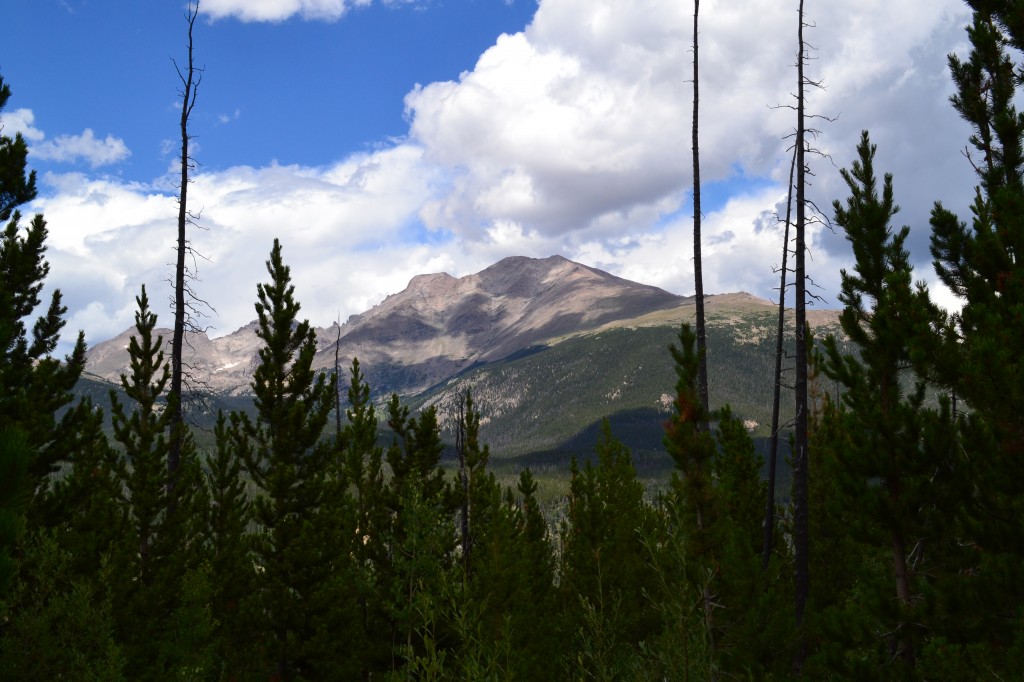 The last 0.25 miles of the Finch Lake Trail drops sharply downward via a series of switchbacks. While the descent provided relief from all the climbing we had been doing so far, we couldn’t help but think how tough it was going to be on our return trip. When the trail finally flattened out, we were greeted with the lovely east shore of Finch Lake. We paused for a few minutes on a submerged boulder on the banks of the lake enjoying the scenery and solitude. The water was crystal clear enabling us to see all the rocks and boulders on the bottom. The lake was lined with bright green vegetation on its eastern shore mixed in among all the rocks and boulders. Much of the land surrounding the lake was marsh. Seen below are photos of Finch Lake. 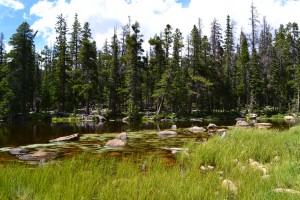 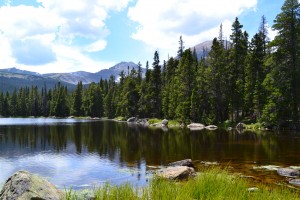 We didn’t spend too much time here as the day was quickly moving along, and we still wanted to see Pear Lake. We debated a few minutes to see if we had the energy to keep going. Pear Lake is an additional 2.2 miles from Finch Lake, which would make our entire trip close to 12 miles. But, we weren’t tired yet and wanted to see more. We picked up our pace and followed the trail as it skirted around the north side of Finch Lake and the nearby back country campgrounds. We soon discovered that this portion of the hike was quite difficult. It climbed steeply for the almost the entire next 2.2 miles. Our legs burned and our breathing was heavy as we climbed up the north side of a wide valley. At one point we crossed the quaint Coney Creek via a log bridge. Occasionally, the trail opened up to views of bright lush meadows and small, cool ponds. While gazing at these sites we almost ran into a beautiful mule deer that crossed the trail just in front of us.  We were careful not to disturb her and quietly snapped a photo and watched her ease back into the forest toward the meadows. The trail from Finch to Pear lake gets very few foot traffic due to the distance of the hike making it an excellent place to see wildlife. Apparently Moose and Elk sightings are common here as well. Seen below is a photo from the Pear Lake Trail and our wildlife sighting. 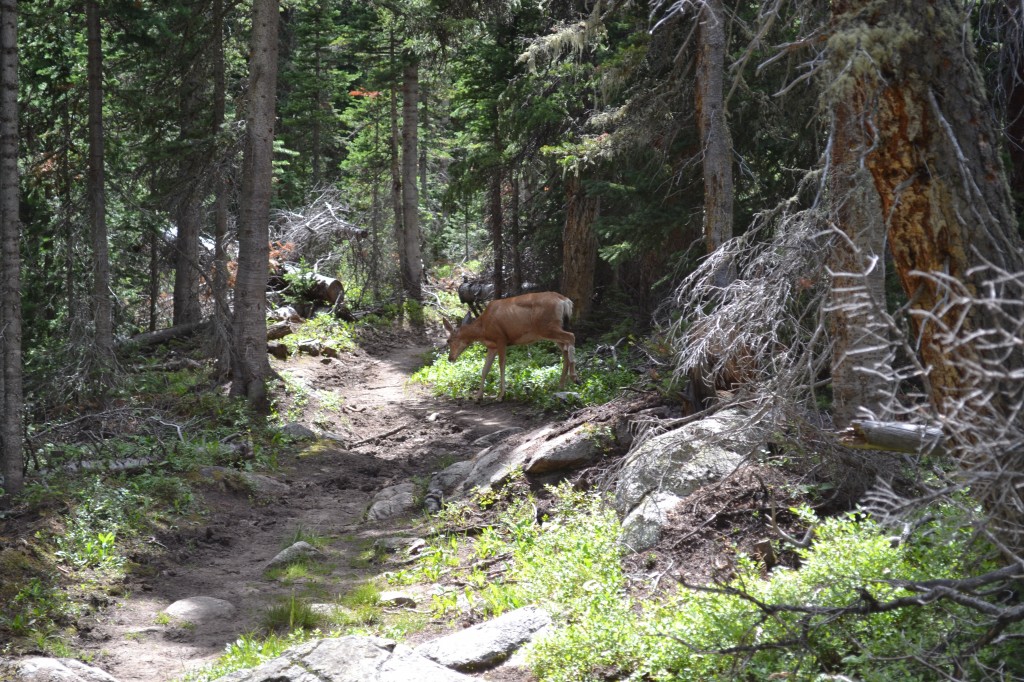 Finally we crossed Pear Creek and saw a change in landscape ahead. We could sense we were close and made one final little climb through an amazing array of wildflowers amid rock and boulder. As we crested the last ridge, we were greeted with the deep dark blue water of Pear Lake and the powerful Copeland Mountain behind it. While we saw another hiker at the lake, we had not encountered a single hiker on our 2.2 mile trek to get there. Pear lake truly felt like we were in the back country. We sat on a large boulder overlooking the water and enjoyed our reward for the long journey. The pizza from the previous night we had packed along tasted amazing. We laid on the rocks and didn’t want to move. But, very suddenly a rain dark cloud engulfed the backside of the mountain sharply dropping the temperature. We were unfortunately only able to spend about 20 min at Pear Lake before the weather forced us to begin our 6 miles back. Seen below are some photos taken at Pear Lake. 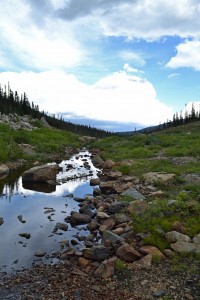 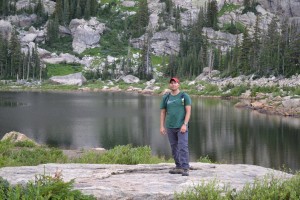 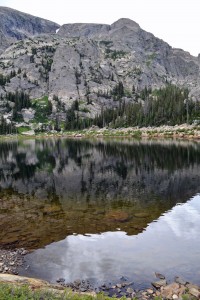 On our way back down to Finch Lake it began to rain slightly and we dutifully donned our rain gear.  We noticed that the rain was hitting us pretty hard and thought that perhaps the rain drops were just really big; but we looked down and noticed little white things bouncing off the ground.  To our surprise the little white things were pieces of hail.  The hail was extremely small, half the size of a pea, and it was gone in a matter of minutes.  But it reminded us that the weather was iffy and we made good time.

Almost back to Finch Lake we saw an unnamed lake (we can’t find a name for it anywhere) and since the rain seemed to have passed right over us, we stopped to look at it.  The lake was gorgeous, with numerous yellow pond lilies in full bloom.  We took a few pictures of the lake and then moved on.  Below are a couple of those images with the yellow pond lilies. 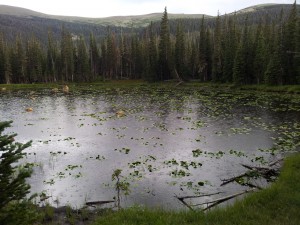 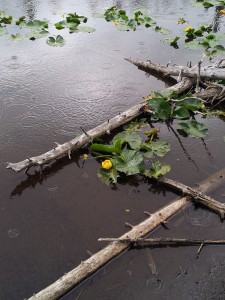 We were back to Finch Lake in no time at all and didn’t stop since the clouds were threatening again.  We kept moving steadily back towards the trailhead, still another 4 miles away.  It was a very peaceful hike and very isolated.  We didn’t see another hiker the entire hike back from Pear Lake (6 miles).  Similar to our Bear Lake Hike, fog rolled in and made the hike feel almost mystical.  Suddenly, Allyson stopped us when she spotted a female Dusky Grouse in its summer feathers.  We watched her for a few minutes as she hopped around on fallen trees.  Below is a shot of the fog and of our grouse. 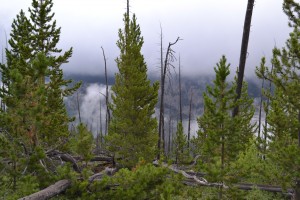 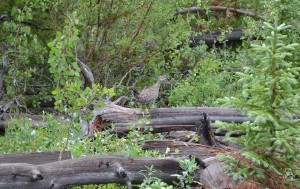 We were pretty close to the trailhead after our grouse sighting and made it back in very good time.  Back at the truck we felt very tired but very happy with our hike.  We had seen some very interesting fungi including multiple fly amanita and brain fungus, a mule deer, a female dusky grouse, and three amazing lakes, the whole time surrounded by the rocky mountains.  It was a good day!