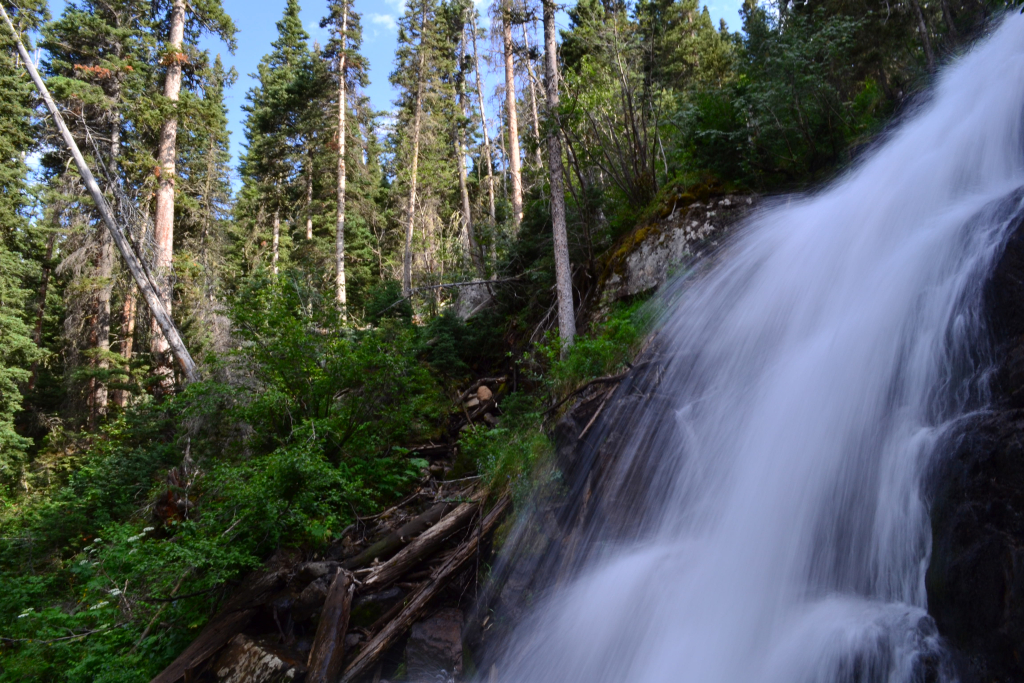 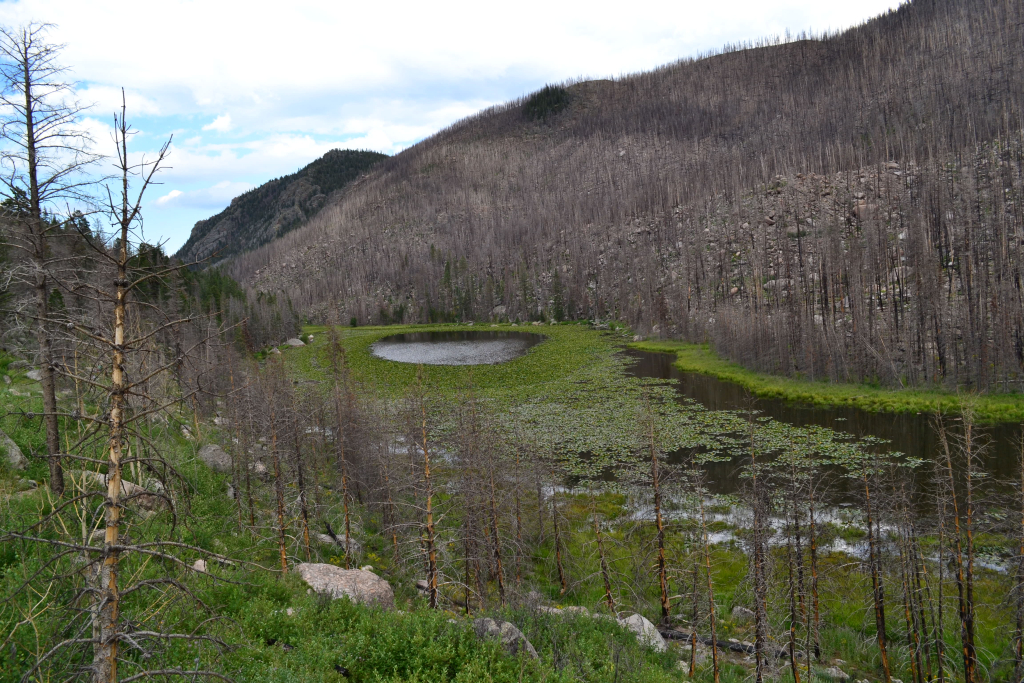 We’ve been to Rocky Mountain National Park many many times before, but have only explored a small fraction of what her 415 square miles have to offer. After a tough climb above 14,000 feet the prior weekend, we were craving some relaxing lower elevation exploration. And when we say lower elevation, we mean 8,000 to 10,000 feet above sea level. Our destination on this particular jaunt into the park was Cub Lake in the Moraine Park region on the eastern corridor of RMNP. The Cub Lake trailhead sits just above 8,000 feet about half a mile off Moraine Park Rd., which is accessed via Bear Lake Road. We arrived on a late July Friday afternoon at about 2:00 pm to avoid the earlier summer and weekend crowds, and we were able to find a decent parking spot. Our hike began with a bridge crossing of the Big Thompson River and continued onward skirting the western side of Moraine park. The elevation gain was minimal to non-existent for the first mile or so of the hike. We enjoyed the easy stroll and admired the plethora of wildflowers along the way. Seen below are photos. 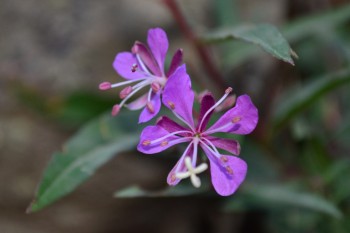 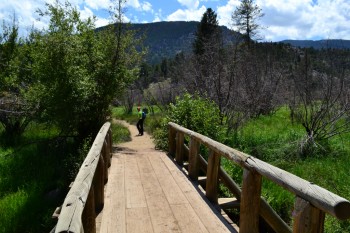 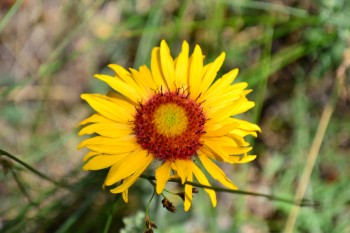 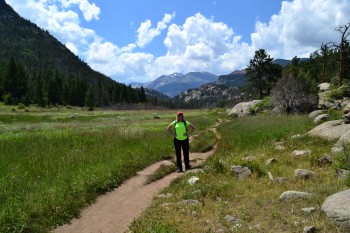 The sun was high and the temperatures warm, and we were ready to gain some elevation and get a cool breeze. Eventually we ended up following the Cub creek and stumbled upon several small ponds before the trail was engulfed in a grove of aspens and ferns. Everything was green and lush. The landscape almost resembled something tropical. In fact, the insect life along this trail did in fact resemble the tropics. We battled large mosquitoes along much of the trail. Past this portion of the hike, we began to notice the remnants of the 2012 Fern Lake fire. Instead of beautiful alpine forests, we saw charred branches, dead trees, and meadows in place of alpine forests. Unfortunately, someone made an illegal campfire (backcountry campfires are not permitted in RMNP) and the steep terrain and pine beetle infestations made it catch very quickly. According to website data, the fire engulfed nearly 3,500 acres before an early season snowstorm quieted it. Seen below are photos. 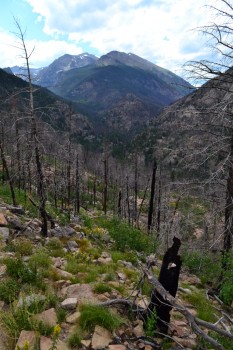 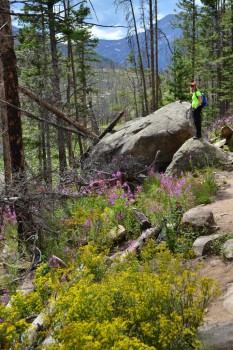 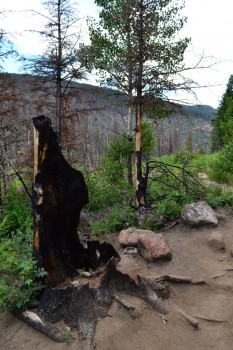 Nonetheless, the wildflowers, animal and plant life among the charred trees reminded us that ecosystems are equipped to adapt and sometimes fire can lead to biodiversity and support the natural progression of the environment. After about 2.3 miles, we reached Cub Lake. While Cub Lake isn’t as striking as many of the other high alpine lakes found in RMNP, it’s quiet beauty is a worthy hiking goal. In summer, the lake is covered in the thick green of lily pads. Marshy banks surround the lake, but a few large boulders on the north shore make a nice place to sit and relax. Seen below are photographs from Cub Lake, our first destination of the day. 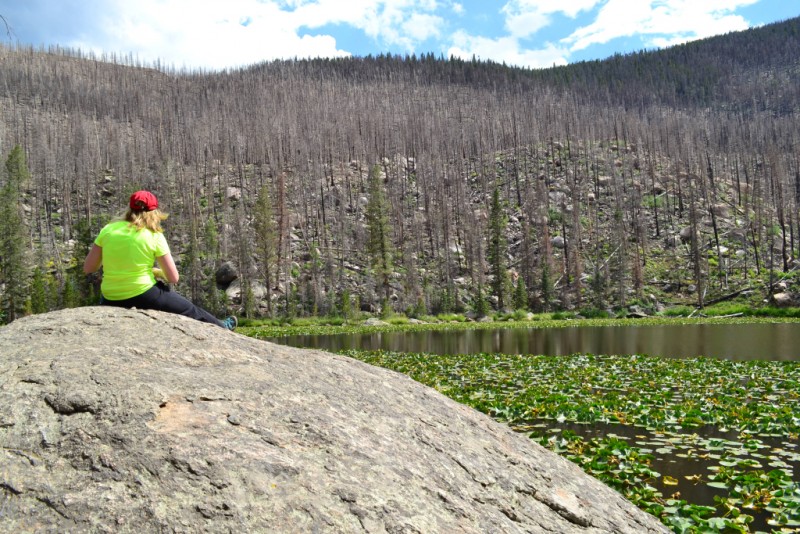 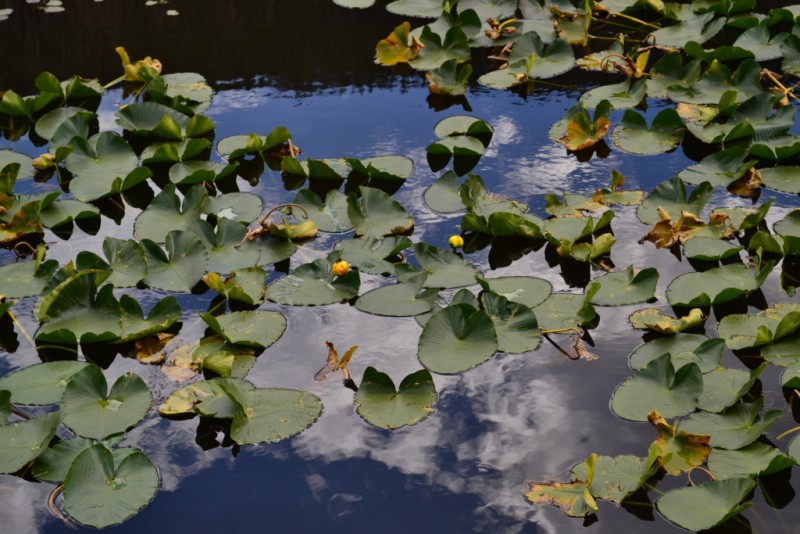 Instead of returning the way we came, we continued northwest on a one mile connector trail leading to The Pool. We quickly gained a bit of elevation, which provided sweeping views of Cub Lake below. The trail then descended sharply into Forest Canyon. After the quick downhill, we reached the Pool and the Fern Lake Trail. Instead of completing an out and back hike, we opted to make a loop and hike back to our truck via the Fern Lake Trail. There were many other hikers at the Pool, which is easily reached via the 1.7 mile Fern Lake TH. Essentially, the pool is a continuously churning bit of water fueled by falls from up river. It is quite a pretty site, but not the most exciting of destinations in the park in our opinion. 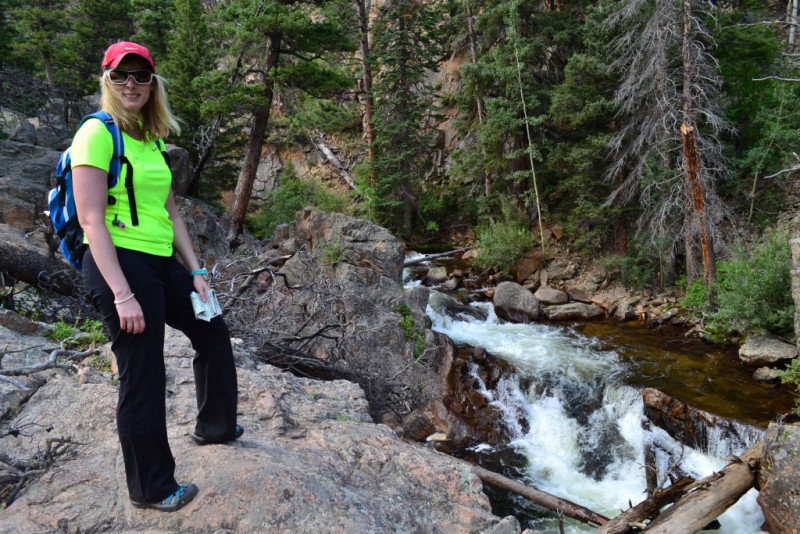 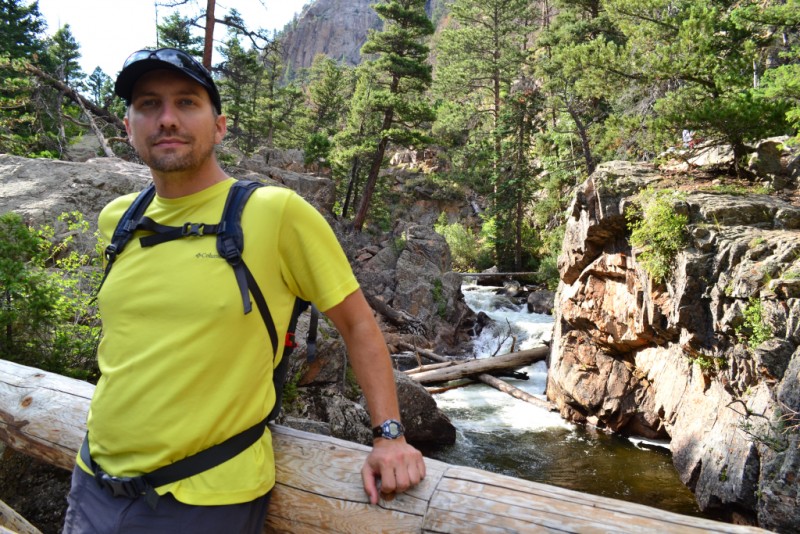 We still had plenty of time and daylight at The Pool, so instead of returning we proceeded to follow the Fern Lake Trail further out towards Fern Falls and Lake. Just before reaching the Falls, we ran into two hikers who said they had just encountered a black bear about 10 min past the Falls. They mentioned he/she didn’t retreat and they were afraid to continue towards the lake. We heeded their advice and stopped at Fern Falls. Fern falls is quite spectacular and well worth the additional mile ascent from the Pool. Seen below are photograph of us enjoying Fern Falls. 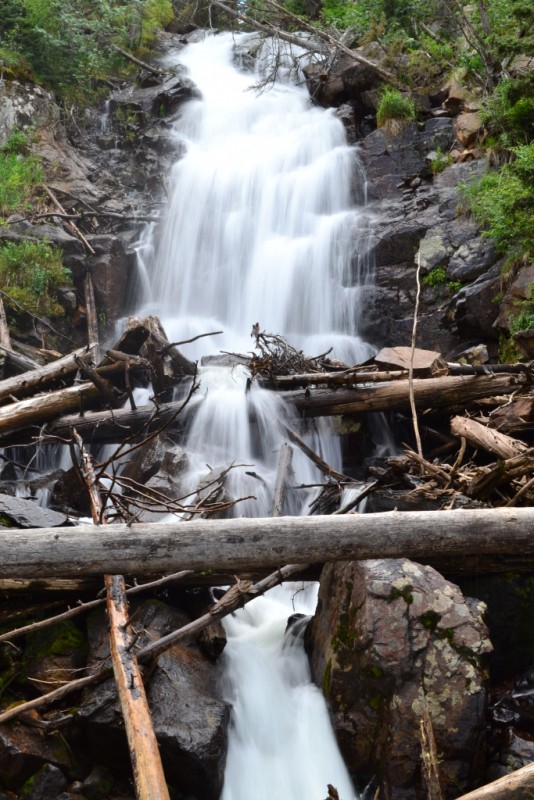 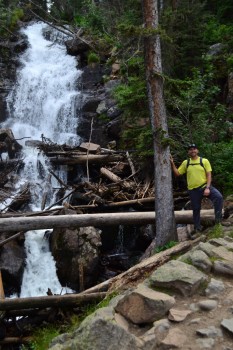 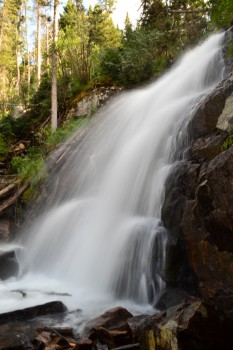 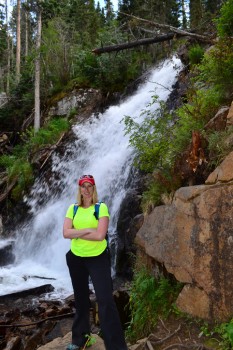 We encountered a few hikers coming down from Fern Lake while we relaxed at the Falls. Many of them had seen the bear and claimed it was just foraging and didn’t bother them. Thankfully the last grizzly bear to be seen in Colorado was in 1979. However, we are not anxious to run into a black bear on the trail. After 15 or so min, we returned to the Pool and proceeded back via the Fern Lake Trail. The Fern lake trail was mostly downhill towards the parking lot and led us through a dense forest of aspen and lodgepole pine.  The trail followed along the Big Thompson River, and eventually led us to Arch Rocks which is a large collection of boulders of interesting shapes and sizes planted next to the river. We were unaware of this unique formation when we set out on the hike and were pleasantly surprised. Seen below is a portion of the Arch Rocks. 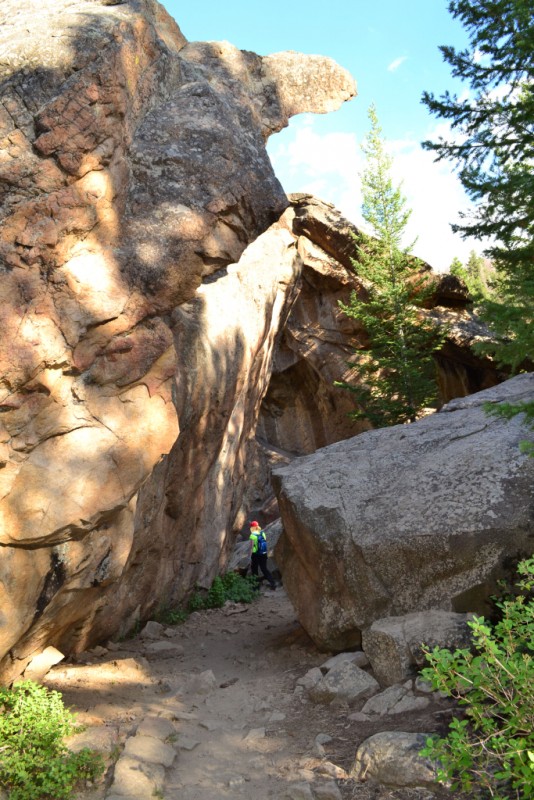 We continued for about 1.7 miles until we reached the Fern Lake TH. Unfortunately, this meant we would have to hike 1.2 miles on a dirt road to get back to the Cub Lake trailhead. The mile went quickly, and we made it back to the Cub Lake TH and our truck in no time. According to Garmin our loop hike was 8.6 miles. While we enjoyed this hike, it does not offer the same high alpine experience that many other lake destination hikes do in RMNP. Despite this, if you have multiple days to spend in the park, especially in the fall when the aspens are changing and the elk are bugling, Cub and Fern Lake would be a great viewing spot.