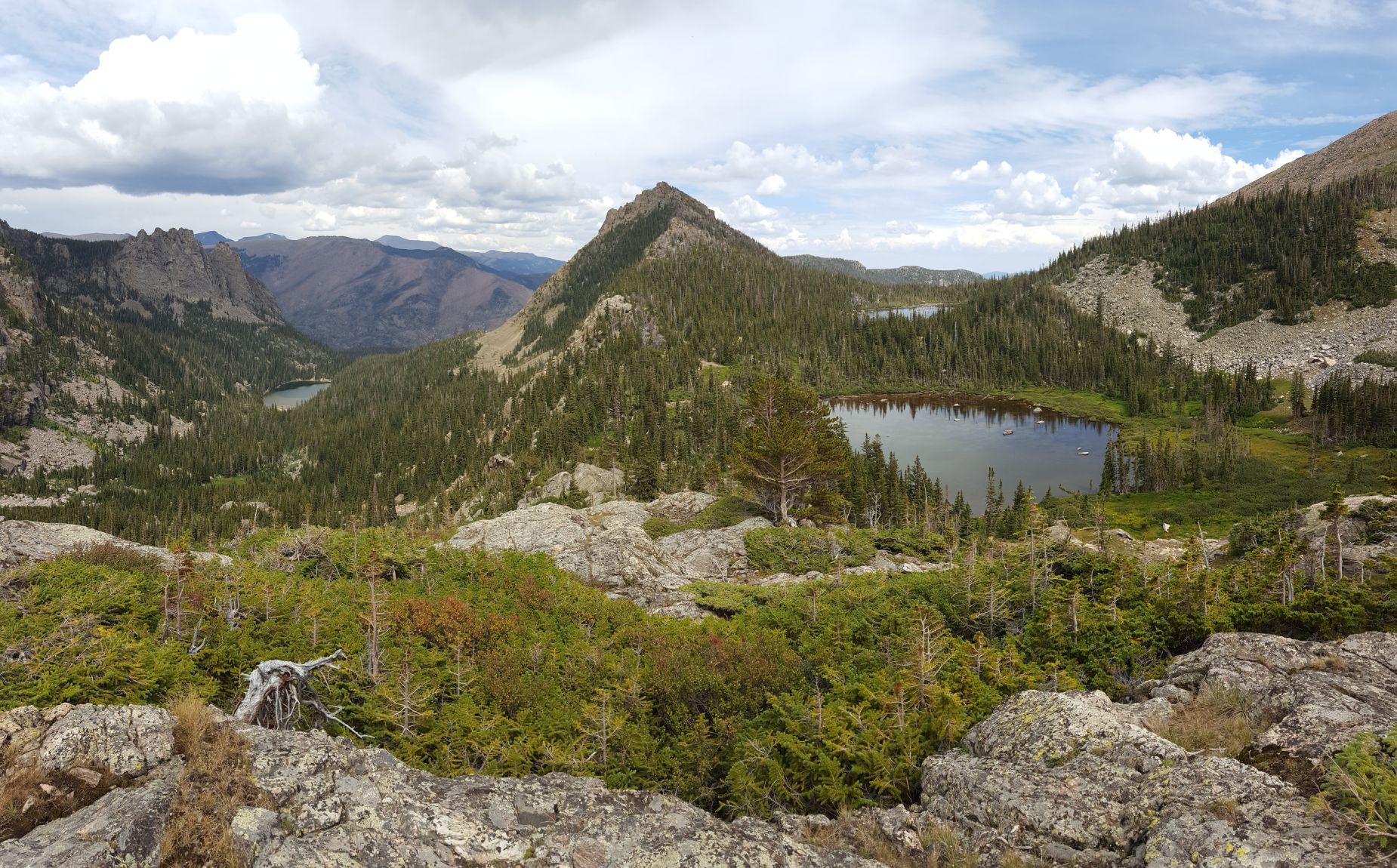 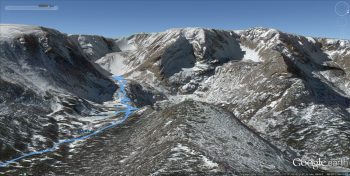 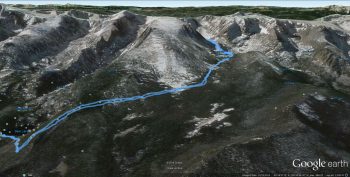 The weather was iffy this weekend, and we didn’t want to get ourselves stuck on a 14er during a thunderstorm; so we opted to head over to Rocky Mountain National Park (RMNP) and explore some lakes.  The fact that we hadn’t been to RMNP in a while also motivated us to go exploring.  After some discussion, we agreed we’d head out towards Lake Helene and have a look around.

The easiest route to Lake Helene is from the Bear Lake trailhead, which we know well, since it serves so many valleys, lakes, waterfalls, cirques, and mountains.  From the Bear Lake trailhead you walk north around Bear Lake very briefly until you see a turn off to the right with a signpost for Flattop Mountain, Fern Lake, Odessa Lake, and Bierstadt Lake (seen below).  You gain some elevation here in the first part of the trail, which is heavily wooded and beautiful.  The beginning of the trail is filled with Aspens, and as you continue it becomes dominated by pines.  The trail is a very nice, well kept path, which was a welcome change from some of the rough trails and bushwhacking we’ve been doing. 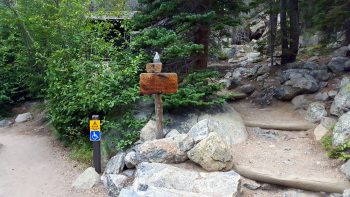 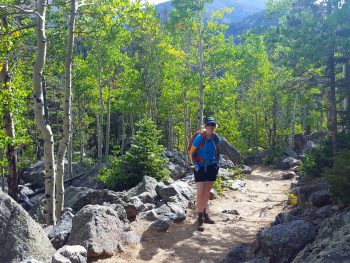 You come to a few junctions along this path, to get to Lake Helene, you keep following the signs for Odessa Lake and Fern Lake.  You can veer off at any of these junctions and they will take you to Flattop Mountain or even to Lake Bierstadt.  But the path is very well marked and the signs are good (seen below).  As we continued we came to a few openings in the trees where we could see the gorgeous landscape below.  Plenty of birds were out, as well as a multitude of ground squirrels, Albert’s squirrels, and some chipmunks.  To add to the beauty, there were still flowers in bloom along the path. Eventually, we hit a rock field, which offered up a glimpse of Notchtop Mountain (the notch can be seen in the photo below). 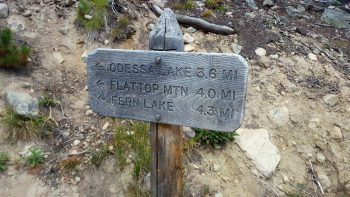 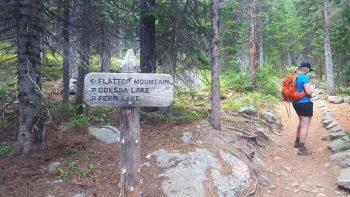 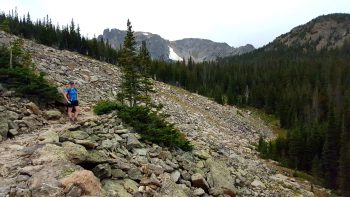 As we made our way back into the forest, we came across the Sourdough campsite.  Not very far past this sign is a spur that runs off to the left, which takes you to the Two Rivers lake.  It could be easy to miss this turnoff, so we’ve included some pictures below to help.  We had to bushwhack a little bit to get to the lake, but we did end up on the north bank and had a snack on some rocks.  It is a gorgeous lake and we had it to ourselves. 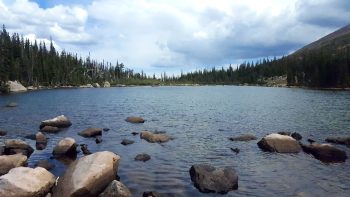 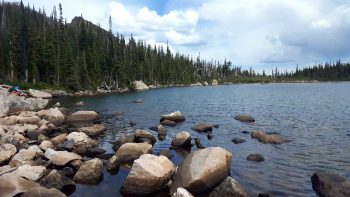 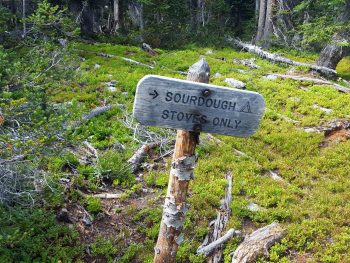 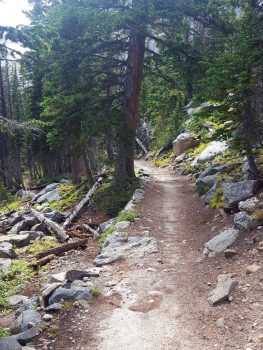 After heading back to the main trail we continued for a very, very brief time until we came to multiple crossroads. The first fork in the road was a path that veered to the right and right up Joe Mills Mountain.  We wanted to go up just a little bit to see the view, and we were glad we did.  It was an amazing view of Notchtop Mountain and Flattop Mountain as well as the cirque below (see the image below).  The second split was less obvious, and this is where you have to decide if you want to head to Lake Odessa or Lake Helene.  The main trail obviously turns sharply to the right and descends, but there is a small path that continues straight towards Notchtop.  If you want to see Lake Odessa, then take the main trail, but we wanted to see Lake Helene, and thus took the path less traveled.

As we continued on the path, we came to a small stream crossing.  Just above the stream was Lake Helene.  We reached it and explored briefly.  There were some ducks quacking and it was very nice, but for some reason we were called towards the cirque above.  As we headed onward toward the bowl, we ran into some nice people from Florida.  The husband told us there was a nice view on a small game trail to the right, and so we explored and found a very nice little overlook.  We stopped here to consider our next move.  Now, if you stop here and return, we’d say this is an easy hike; but if you continue to the alpine lakes it becomes an intermediate hike. 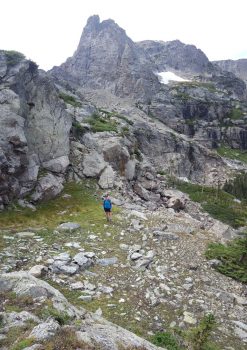 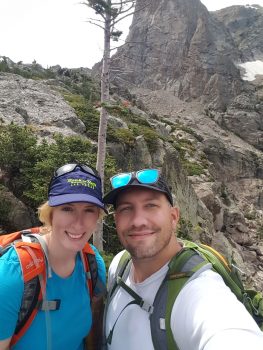 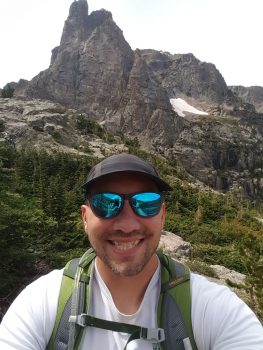 We had an inkling that there were some alpine lakes up in that cirque, and we wanted to get our dose of scrambling in for the day, so we began up a large rock band towards the bowl under Notchtop and Flattop.  It was a lot of fun, and very quickly we were able to see all three lakes we were thinking about: Two Rivers, Helene, and Odessa (seen below).  After a little bit of route finding and scrambling we found the first of our two unnamed alpine lakes (first lake picture below).  We decided to look over the small ridge to see if there was another lake, and low-and-behold, there was.  It was quite surreal standing in the cirque, and we heard some rockfall coming from the south in one of the gullies.  We also heard some yells coming from Notchtop mountain, but couldn’t see anyone at first.  Below are some pictures.

We spent a little time looking at the face of Notchtop and after some examination we found the climbers.  The camera we had did not have a good zoom on it, so the quality is poor, but you can see two figures on the ledge working their way to the notch.  Lisa Foster in her monumental work on Rocky Mountain Nation Park claims that the route up can be kept to a class 4; however, all detailed routes we’ve found so far are at least a class 5.7 with up to 5.10d variations.  It was late in the day, and weather was rolling in, so we hope they got off safely.  The mountain has peaked our curiosity, and we may go back and explore Notchtop later. 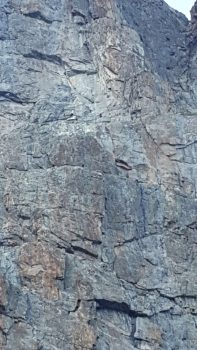 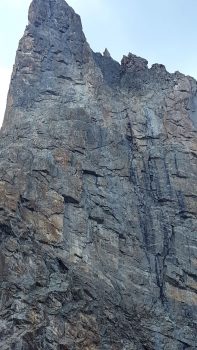 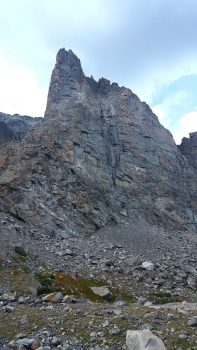 On the way back down, we took a different route by veering to the right and descending a small, friendly gully.  It was pretty, and we had views of the lakes for much of the way down.  At the base we found the Florida hikers again, who had hung out there for quite some time.  We discovered they were feeling the altitude and trying to rest up and decide where to go next.  This is just evidence that even at 10,000 ft. AMS can hit you.  We talked to them for a little bit, they were very nice, and then headed on down.  Once we were back on the main path, it was an easy hike out.  Once we were close to Bear Lake and the Aspens started to reappear, we noticed that the leaves were beginning to change.  Hopefully, we will get back up again the next few weekends and watch the colors of Autumn appear and light up the mountains.  Below are some pictures from our return and a gallery below. 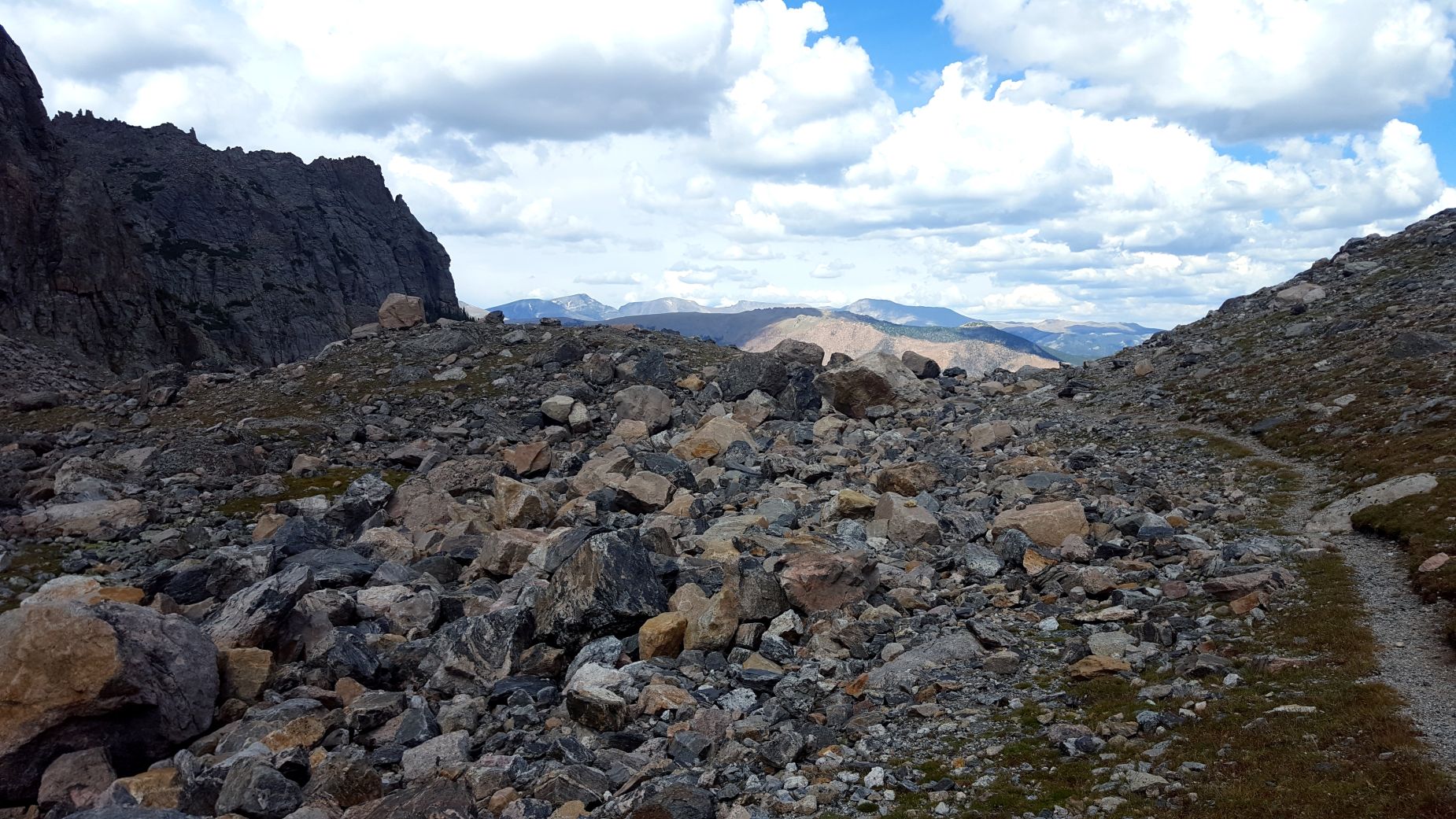 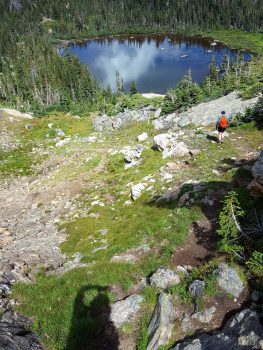 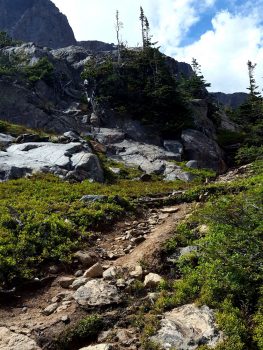 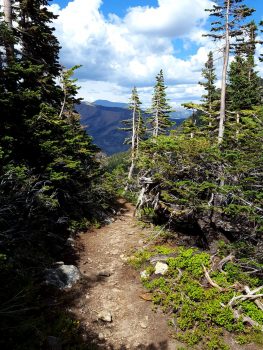 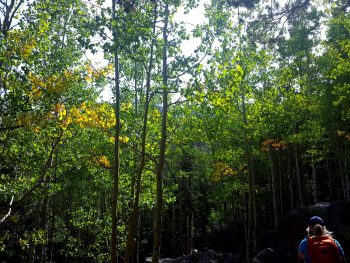