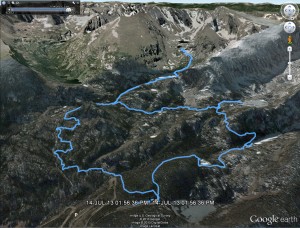 The weather predictions estimated a window of about 4 hours for which we would have a clear break from the pelting rain and thunderstorms that have blessed the region for the past several days. We set our alarms for 5:30 am on Sunday morning, and awoke just as the sun was rising, threw our gear and backpacks into the car, and hit the road for Rocky Mountain National Park. Recent hikes into Wild Basin and the Eastern perimeters of the park have made us fall in love with this gem of a national park. But, we had yet to explore the Eastern Central expanse and the famous Bear Lake and surrounding trail systems. We arrived at the park entrance at about 8:00 am and drove about 7 miles to the Bear Lake Parking. Already there were decent crowds but we were still able to secure a spot. The skies were still blue, and the park temperature was a refreshing 55 degrees. We began our journey without a clear route plan….just a bit more of exploring in mind. We took the Emerald Lake Trail first, which veers left from Bear lake and proceeded an easy 0.3 or so miles to Nymph Lake. The lake was splendid as the early morning sun brightened its clear waters and illuminated the lily pads floating delicately on its gentle surface. But, the crowds kept coming, so we kept moving. Our next stop led us on to Dream Lake about a half mile from Nymph Lake. The trail here was lovely and led us over a creek bridge and upwards to the clear alpine lake. The waters are so still, reflections of the trees and rocks can be seen perfectly in its waters. Pictures of Nymph and Dream Lakes can be seen below.

We had to make a choice at this Lake. Continue on to the famous Emerald Lake? Or take a different path towards Lake Haiyaha, a bit less traveled? Of course we are ones for remoteness and backcountry experiences so at the fork we headed upwards toward the “Lake of Rocks”. (Haiyaha is Native American for rocks) The trail climbed steeply for the next 0.25 to 0.5 miles providing the first challenge of the day. We encountered nice views of the park from our elevation gains along the way. After traveling about 1.8 miles from Dream Lake, we reached our next destination. At first, we simply saw a stagnant pond with a few rocks and mosquitoes. Before too much disappointment overcame us, we decided to scramble over some boulders to our right. After a tough ordeal jumping over rocks and avoiding dinosaur size mosquitos, we were greeted with an amazing sight before us. There was Lake Haiyaha, a large expanse of icy, brilliant blue water surrounded by towering boulders nestled in chaos canyon. The color of the water was different than the earlier lakes we had seen. The gentle rise of brook trout could be seen here and there. We boulder hopped around exploring the area and then stopped for a quick rest here before moving on.  Seen below are the remote lake, boulders and a little relaxing. 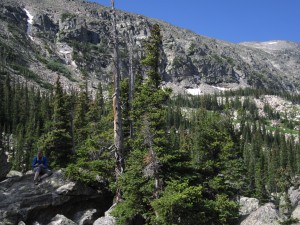 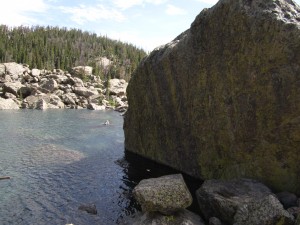 At Lake Haiyaha, we made the decision to keep moving on to The Loch, also referred to as Loch Vale interchangeably.  We hiked back out to where the trail forks and followed the path that leads to the Mills Lake/The Loch junction. The path took us through thick forests, damp from the daily thunderstorms RMNP has been washed with each afternoon for the past week. Occasionally, we would find a narrow creek sprinkled with wildflowers on either sides.  We followed this route for about 2.1 miles and then took the Loch Vale Trail the remaining .9 miles to the lake. This almost mile encompasses a series of switchbacks that steadily climb alongside Icy Brook. The roaring waterfalls and rushing water can be heard throughout this section. As we ascended higher we caught glimpses of the cascades in the valley below. Seen below are a few photos along Loch Vale Trail. 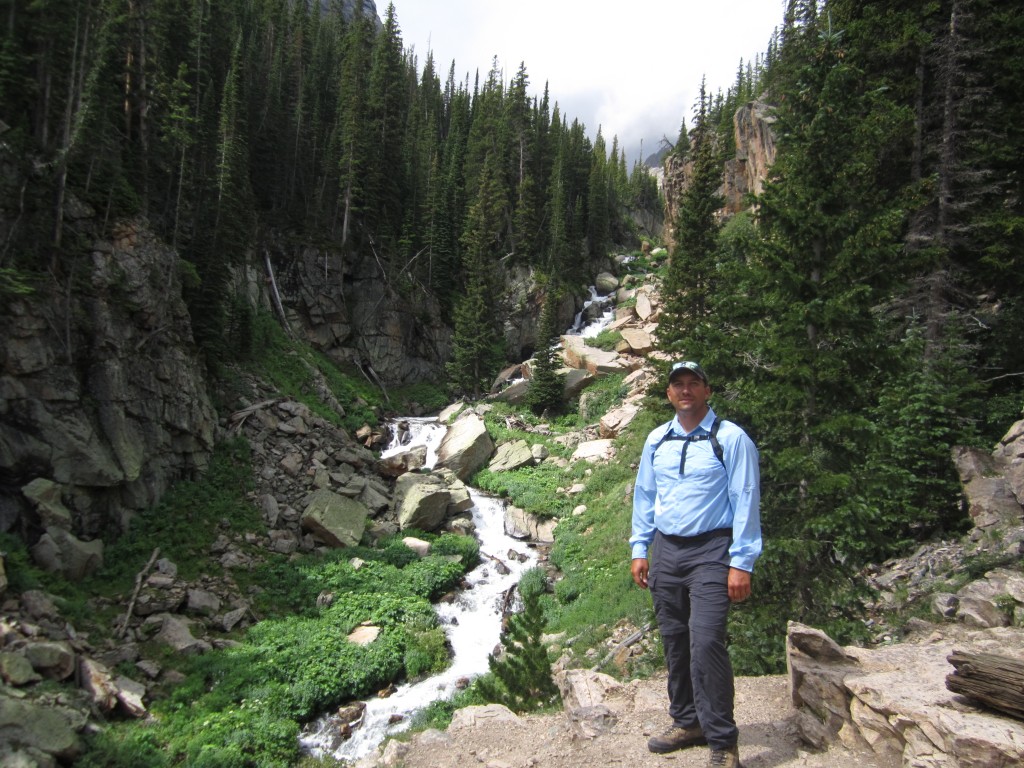 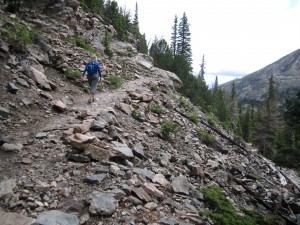 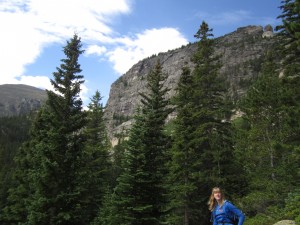 As we reached the lake a gentle fog began to roll in, and the air filled with a thick mist. The sky was much darker now, and the sun had played enough for the day. There was a profound silence at the Loch. A silence to remind us of the enormity of the backcountry. The remoteness. The Loch is still water fed gently by streams created by Andrew’s Glacier and Taylor’s Glacier. We briefly stopped at the social spur which veers left to take a few pictures before continuing on the main trail that skirts the Loch’s lengthy shoreline. Dramatic views of Taylor Peak and Glacier are seen directly across the lake. The fog enveloped their tops. The sharkstooth stood jagged and prominent and unabiding as a black cloud wrapped around it. 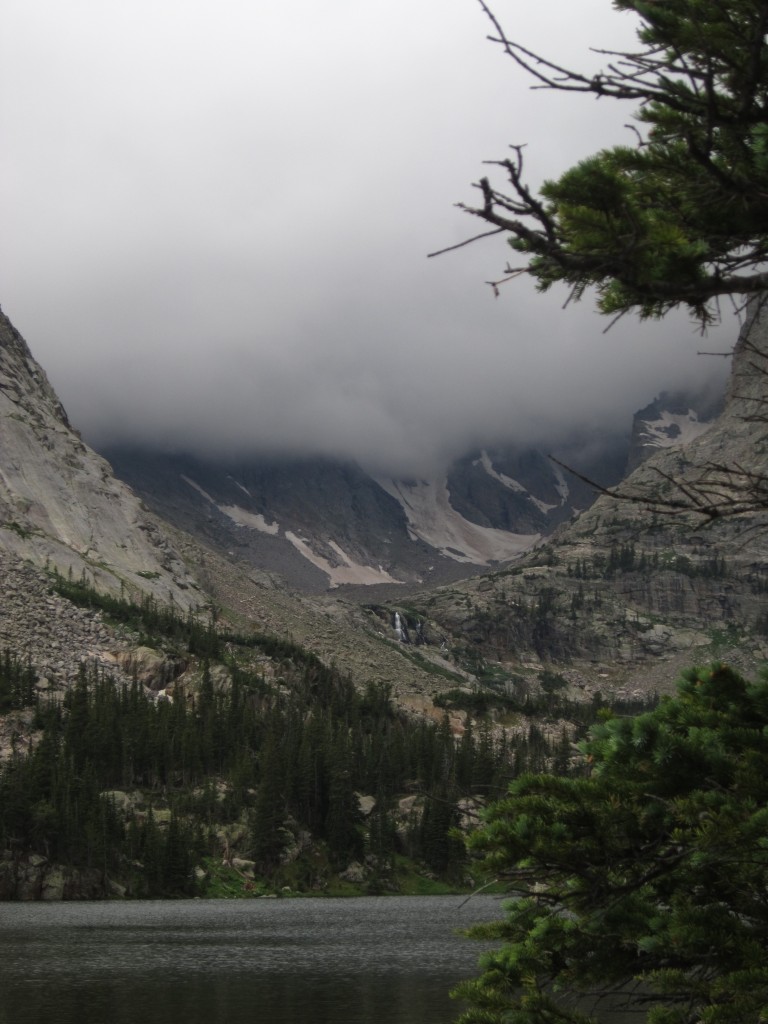 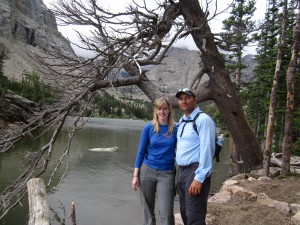 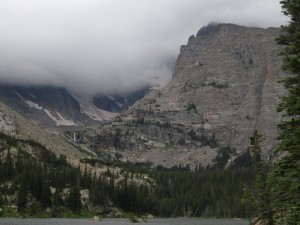 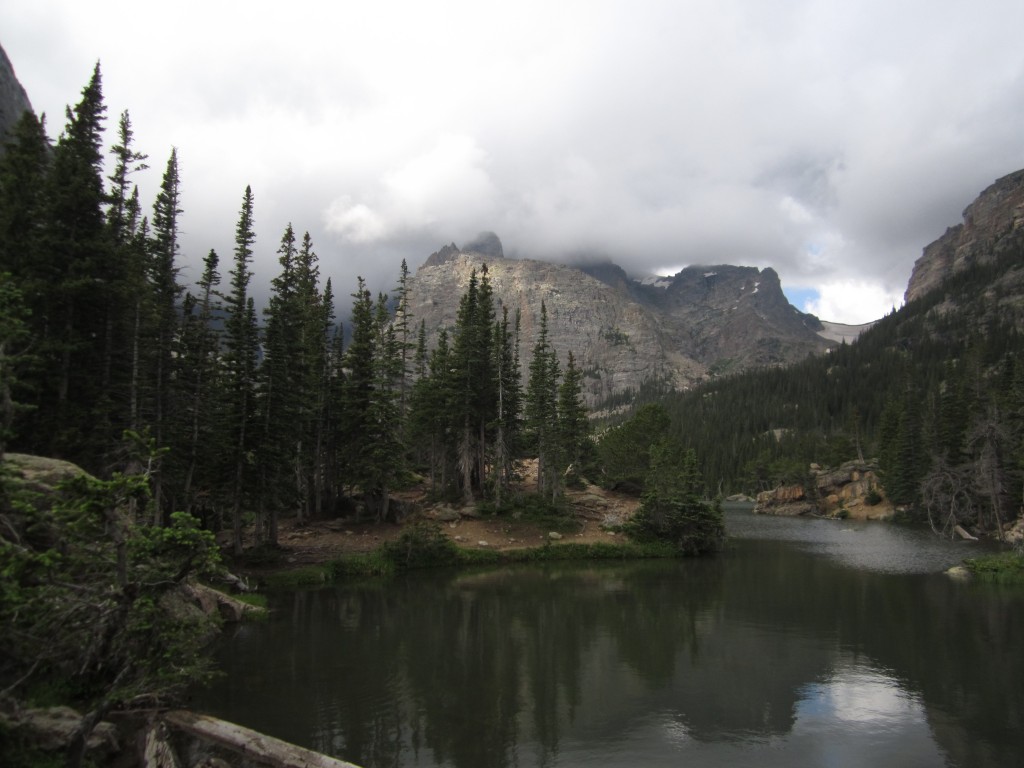 We continued around the north shore of the lake. After a game of chance, we took the route to Timberline Falls instead of Andrew’s Glacier when the trail forked. After another 0.4 miles of gentle climbing we got our first great views of Timberline falls. The views were truly amazing. We were engulfed in its allure and ignored the threat of rain. Our gentle trail then turned steep as it climbed over 200 feet in just under 0.2 miles. We climbed steadily and reached the falls. And then the rain came. As we climbed and explored the falls, the temperature dropped to 40 degrees, the rain pelted down on us and the wind picked up dramatically. We were less than 500 feet from reaching the Lake of Glass and Sky Pond just beyond the falls but had to turn back due to extreme conditions. The rocks and boulders above the falls made traction impossible. Our hands were freezing, and though we had water resistant clothes, we still were soaked very soon. Seen below is our amazing journey to Timberline Falls. 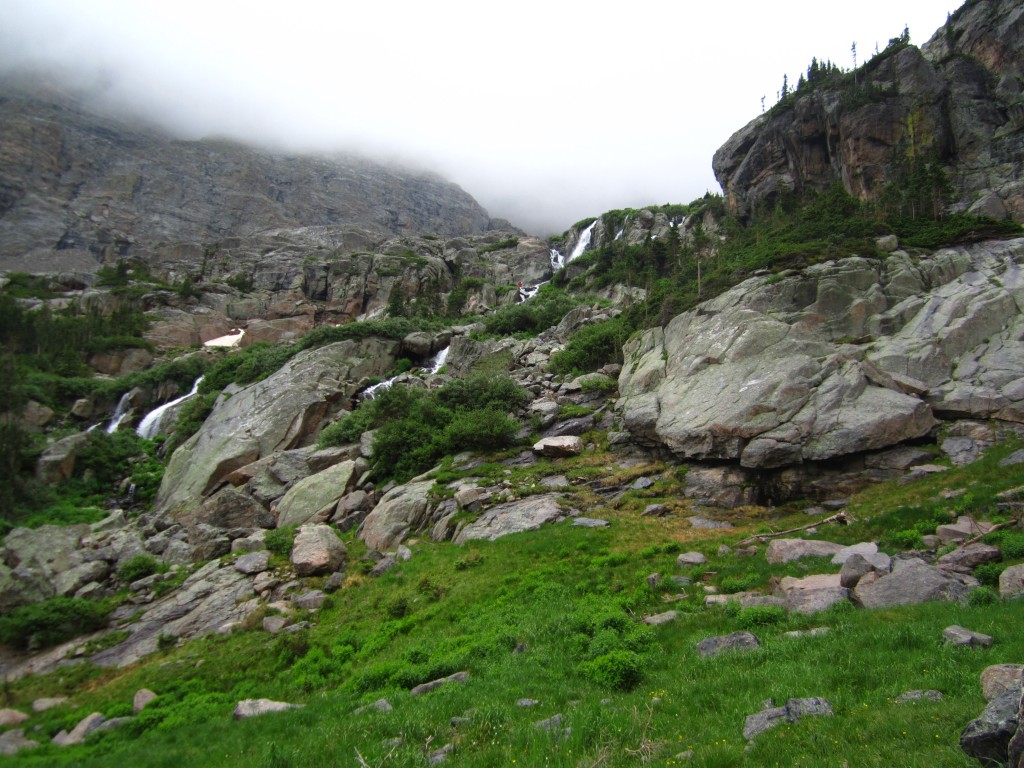 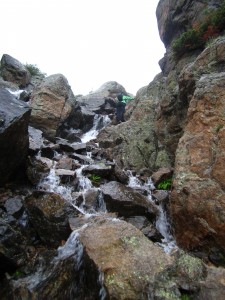 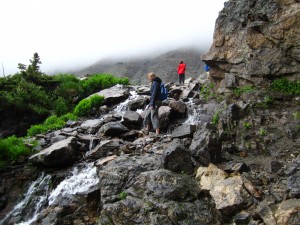 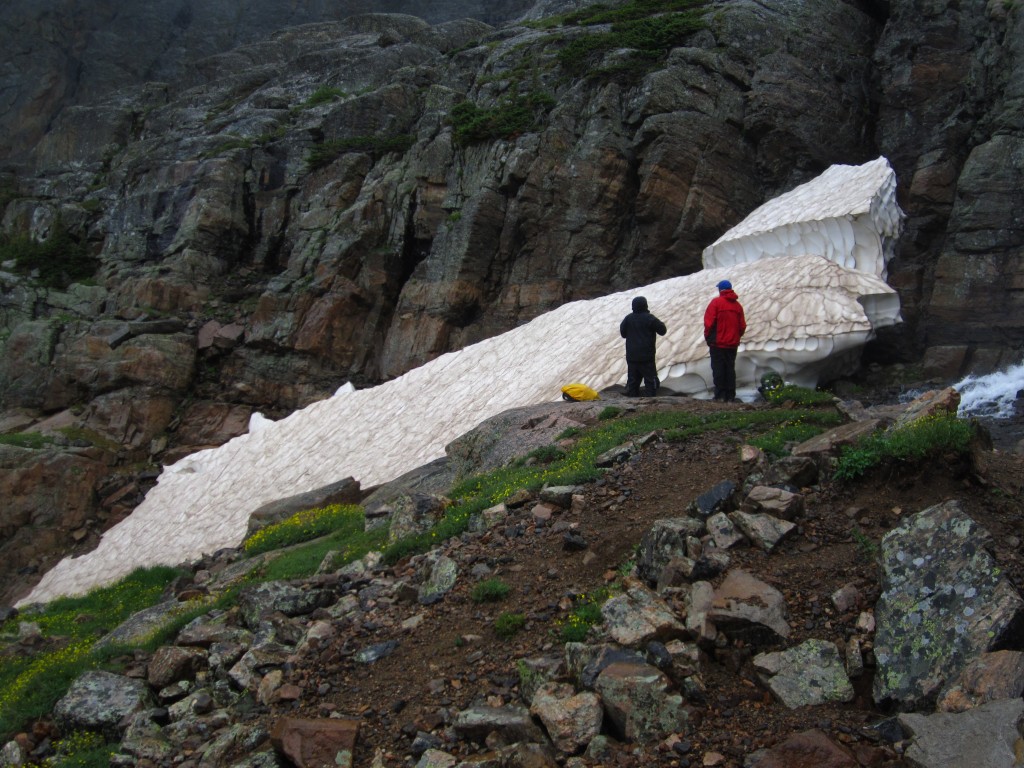 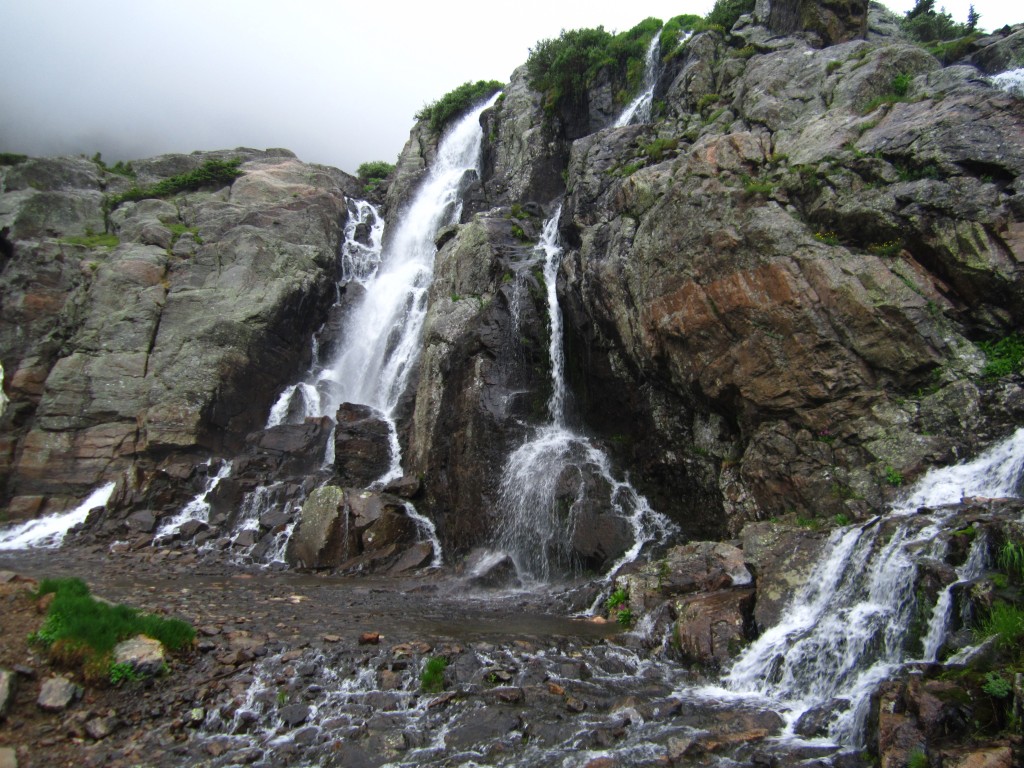 The excitement of our journey to the falls quickly turned into regret as our soaked shoes and clothes clung like ice to our wet bodies. We walked as quickly as possible back down the steep terrain and quickly made it the 1.8 miles back to the Loch Vale. We skirted the lake, took one last quick look and hauled it to escape the weather. Instead of returning to the junction and heading back to Lake Haiyaha, we veered northeast towards Alberta Falls and Glacier Gorge Trailheads. About another mile in our clothes dried, and we slowed it down and took a break at Alberta Falls. Though quite lovely in their own right, seeing Ouzel falls and Calypso Cascades last week and climbing on Timberline falls made these falls seem just pretty. We also met the crowds again at this POI. Below are a few photos of Alberta Falls. 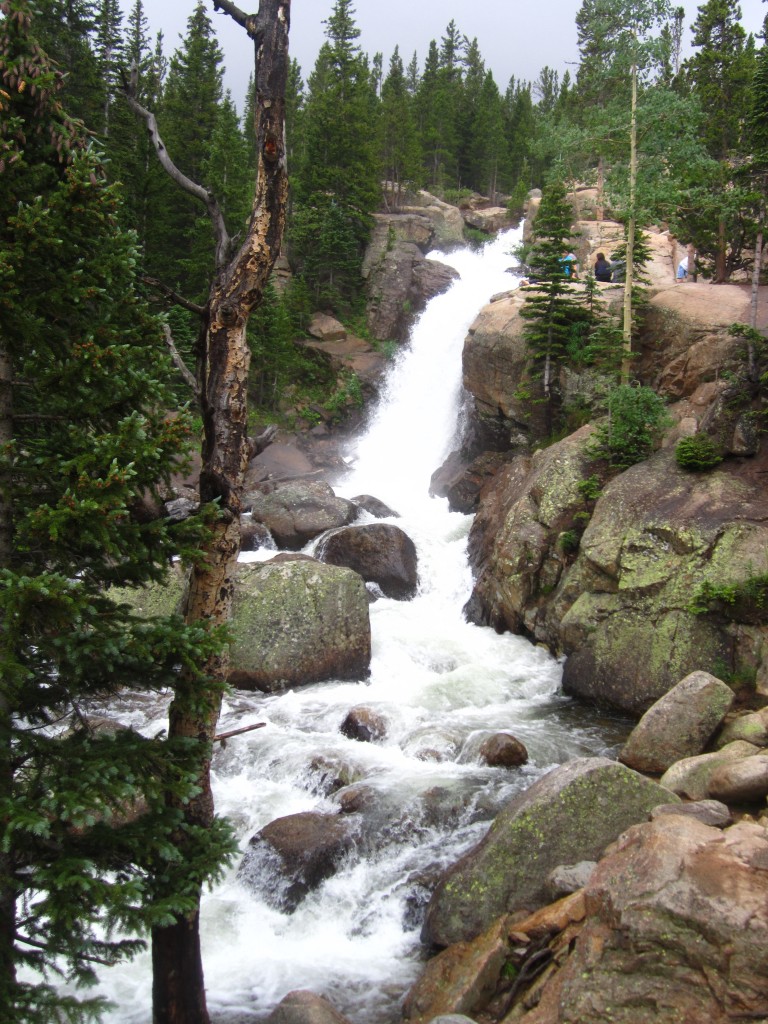 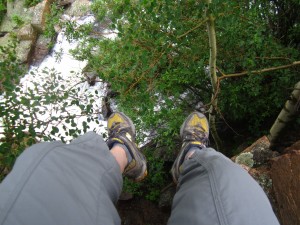 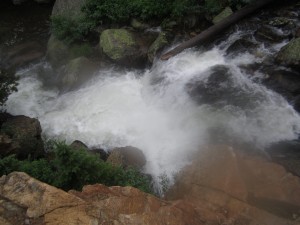 Though the storms subsided, we saw another dark cloud rolling in and opted to trail run the last 0.8 miles back to Bear Lake. It was exhilarating running in the cool air through trees and rocks and alongside falls and canyons. We finished the last mile at a pace of about 6.7 miles per hour. After this 10 mile trek, it was nice to be back a the trailhead. We finished the day by finally seeing the famous Bear Lake. Fog gently rolled in and made for a spectacular, relaxing finish to our day. We sat on a bench and watched it come in as it covered the waters and us like a cool blanket. 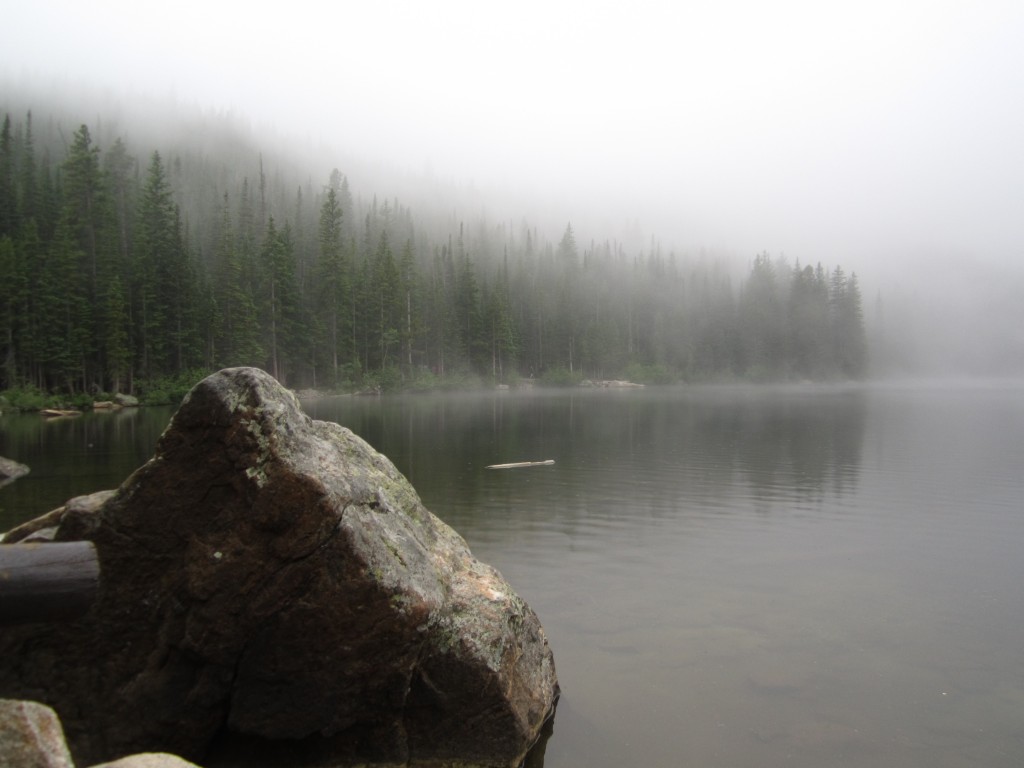 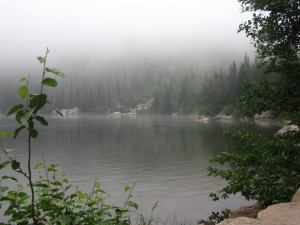