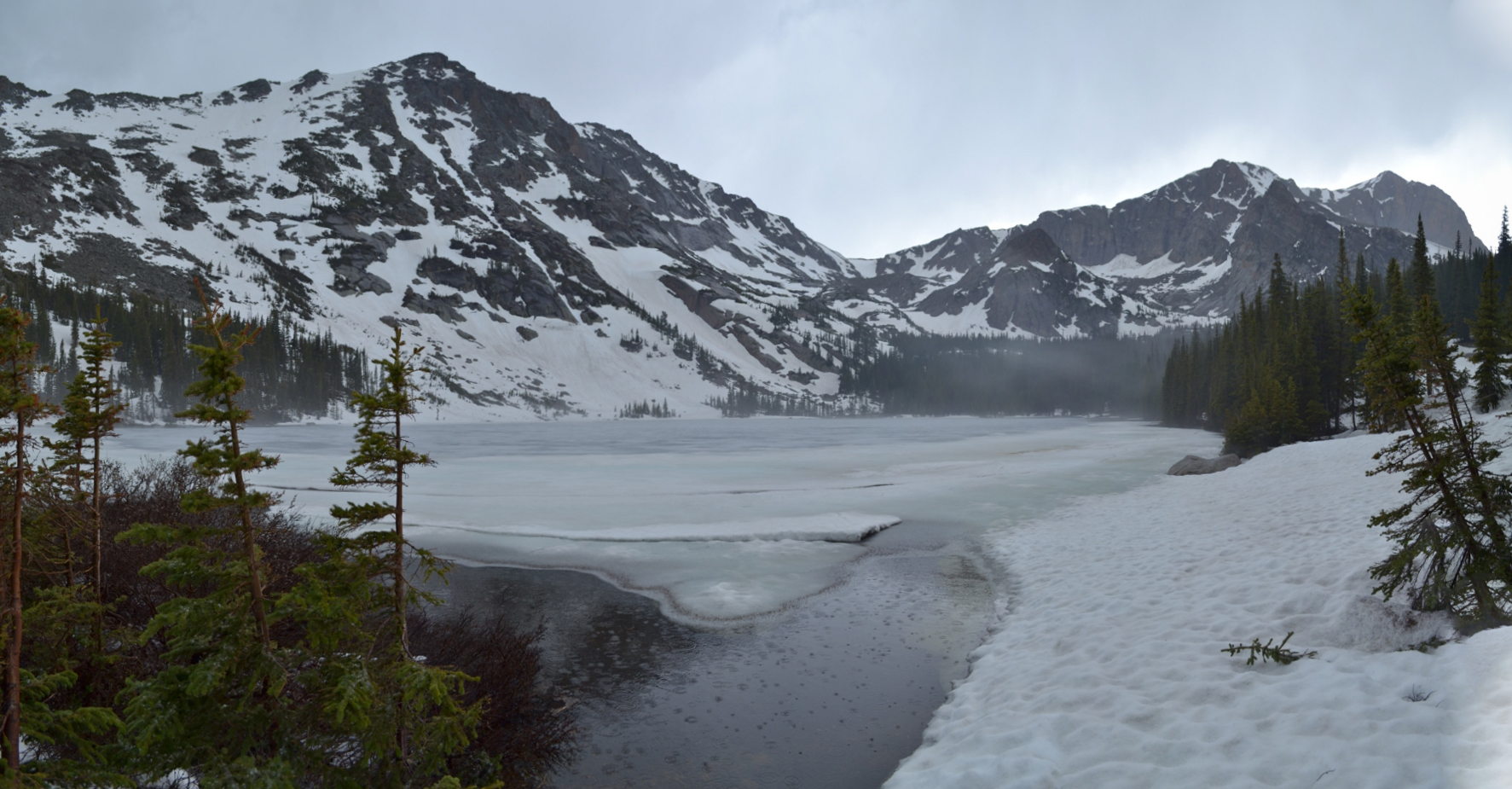 A week away from the summer solstice, we decided to try our luck with a mountain hike in Rocky Mountain National Park. The weather has been memorable to say the least this year in Colorado, and we weren’t entirely sure what to expect on the trail in early June. We arrived at Wild Basin’s summer trailhead at about 10:30 am, and quite unexpectedly got the very last parking spot. After some banter with the volunteer park rangers about which lake to pursue on our hike, we opted for Thunder Lake. Rangers informed us that no one had yet reported making it to Thunder Lake as the trail becomes muddled and lost in fields of snow about a mile from the lake. Previous trips to Wild Basin have taken us to most of the other lakes and destinations, so we decided to go for it.

Weather reports suggesting isolated storms for later in the afternoon, so we figured we might have a chance of getting rained on but we thought we’d make it out in time. We began on the familiar trail that follows along the St. Vrain to the majestic Copeland Falls. Due to the excessive rains this spring, the river was extremely high. Seen below is the St. Vrain during the first mile of the hike. 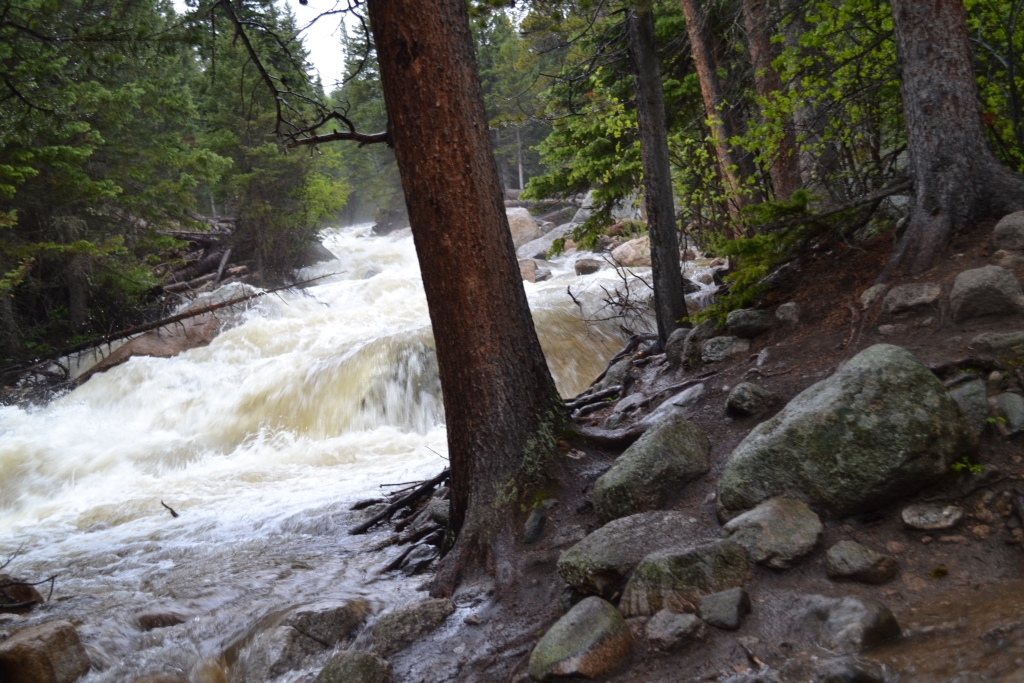 Due to the devastating floods of 2013, the Ouzel Falls bridge that leads to Ouzel lake and the junction for Thunder lake was washed away. We were told by park rangers that there are cairns leading around the top of the falls as a secondary means to cross, however the recent heavy rainfall made this route dangerous. Instead we took an old camping trail that skirts around the falls. Seen below is a map of the Wild Basin trail system courtesy of the National Park Service. The red arrow points to the connector trail we utilized. This stretch of trail was about 1.3 miles and led us mostly uphill through dense woodlands. We could hear the sound of the water and falls as we made our way along this trail. But, it was disappointing that we couldn’t see Ouzel Falls on this route anymore.

At the end of the connector trail, there is a sign indicating a trail junction. One way leads to Ouzel Falls, the other towards Thunder lake and Lion Lake #1. At this point in the hike, we met up with another solo hiker for company and continued upward towards the lake. As we gained elevation, we began to lose the warm temperatures we had grown accustomed to and began to see patches of snow. These patches of snow got larger and deeper once we passed the Lion Lake No. 1 trail junction. Seen below are photographs of the trail. 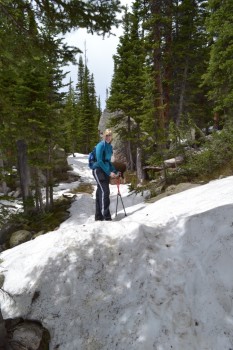 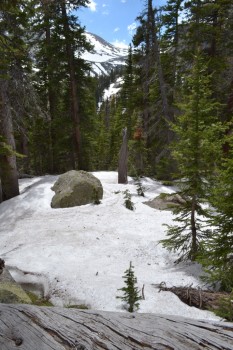 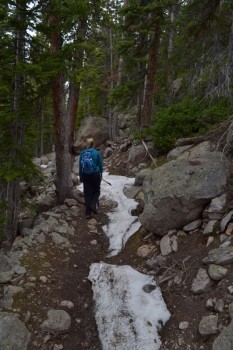 When we got about a mile from the lake, the trail disappeared. We ran into a a few other hikers who directed us to follow their footprints and veer left of the river. Unfortunately, we forgot our Garmin GPS and only had a cellphone fitness app to track our location. A few hundred feet in, and we had already lost signal. We used footprints, the river, and sun to guide us to the lake. The route took us up and down 10 foot piles of snow, though most of it was well packed in. About 100 yards from the lake, the sun vanished, the sky turned dark, and hail began to plummet down on us. We took shelter for 15-20 min under some dense branches of nearby trees. The hail didn’t stop. We saw what looked like a cabin 50 yards away and decided to make a run for it. It was the Thunder Lake Patrol Cabin, and it was locked. There was however a decent porch with an overhang that we took shelter under. Seen below are photos. We had to climb down 4 feet of snow to reach the porch. 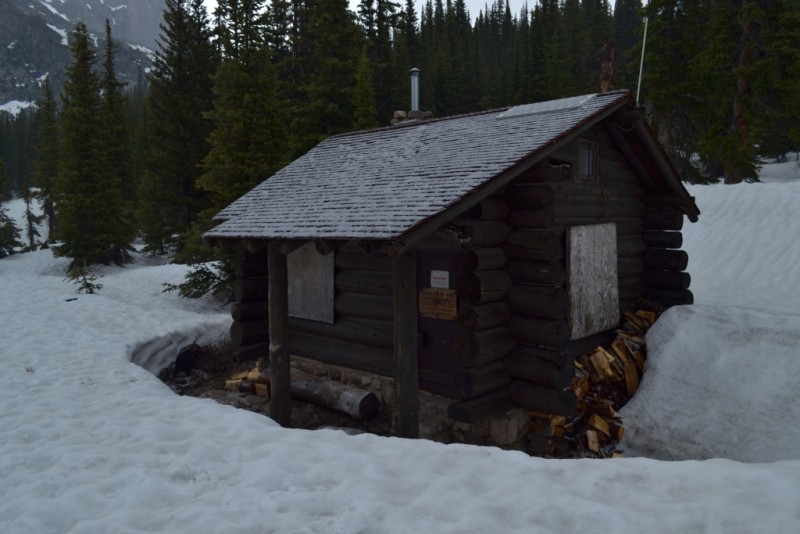 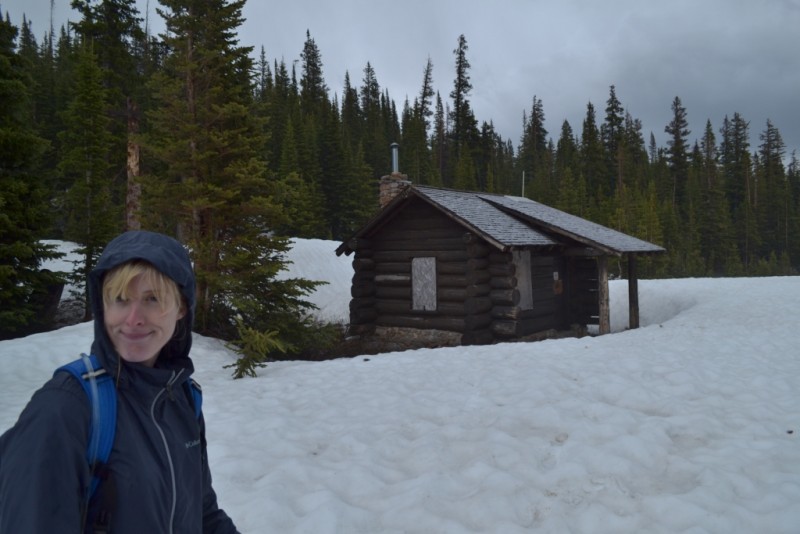 We huddled under the porch for close to an hour with our new hiking friend. It was cold. Really, really really cold. We were pretty upset that the cabin was locked up tight with a sign on it that said breaking and entering could lead to prison time. When the hail turned into a steady rain, we decided that since we made it all the way to the lake, we should at least walk up to its banks. Thunder lake is quite stunning with large picturesque mountains standing proudly behind it. It was still mostly frozen in early June. Seen below are photographs. 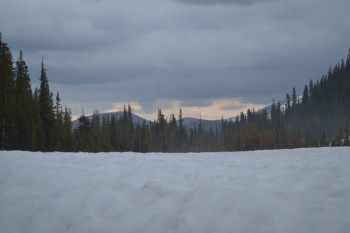 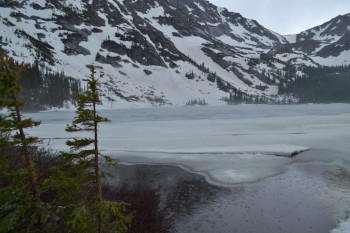 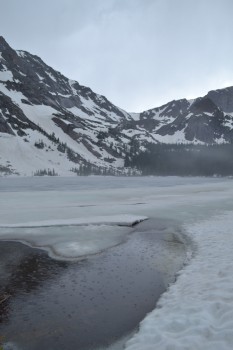 We stood at the lake for 5 min. It was 6.5 miles of uphill work for a few moments of quiet beauty. Was it worth it? Of course. The mountains rewards are great but always hard-earned. We then headed back to find our trail. This proved to be very difficult. The hail and rain had covered up our footprints from earlier. We had to rely on memory and landmarks to get back. We had one moment of anxiety which developed when we lost our way for a moment. Luckily a small frozen lake directed us back. We finally made it to a distinguishable trail. The rain kept coming and was much heavier now. Waterproof clothes proved to be otherwise. When we made it back to the St. Vrain, much of the trail was beginning to flood. We finally saw the welcome sight of the warm X-terra, climbed in and headed to Estes Park to celebrate our rain-drenched, hail-pummeled, snow-filled trek to Thunder Lake. The name was quite fitting after all.

Below is a map of the route. We traveled about 12.3 miles RT and gained a little over 2000 feet in elevation.