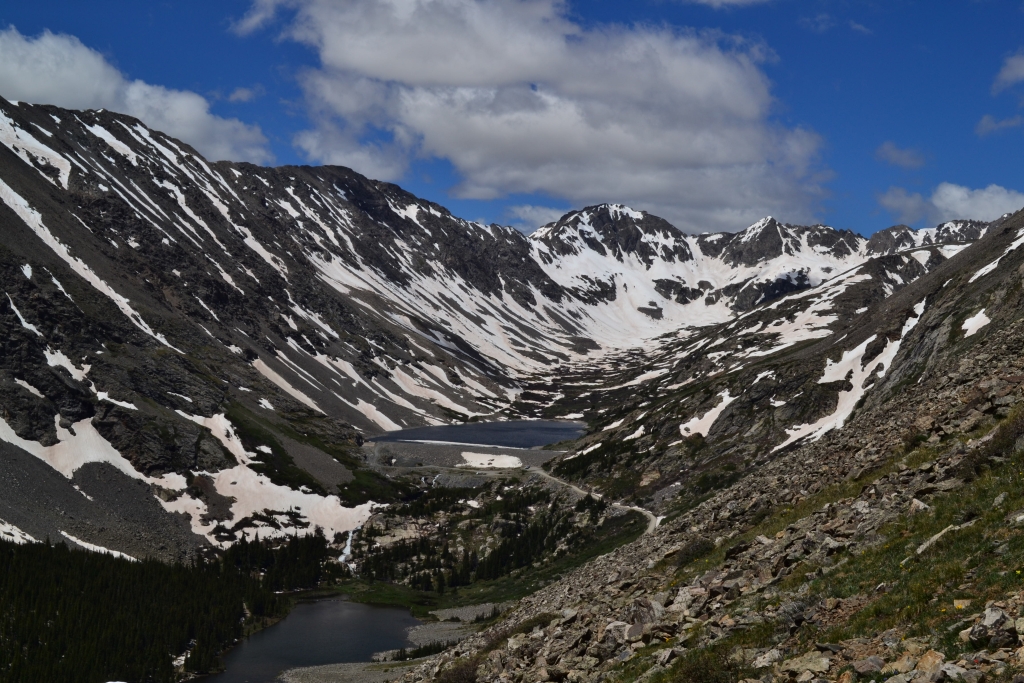 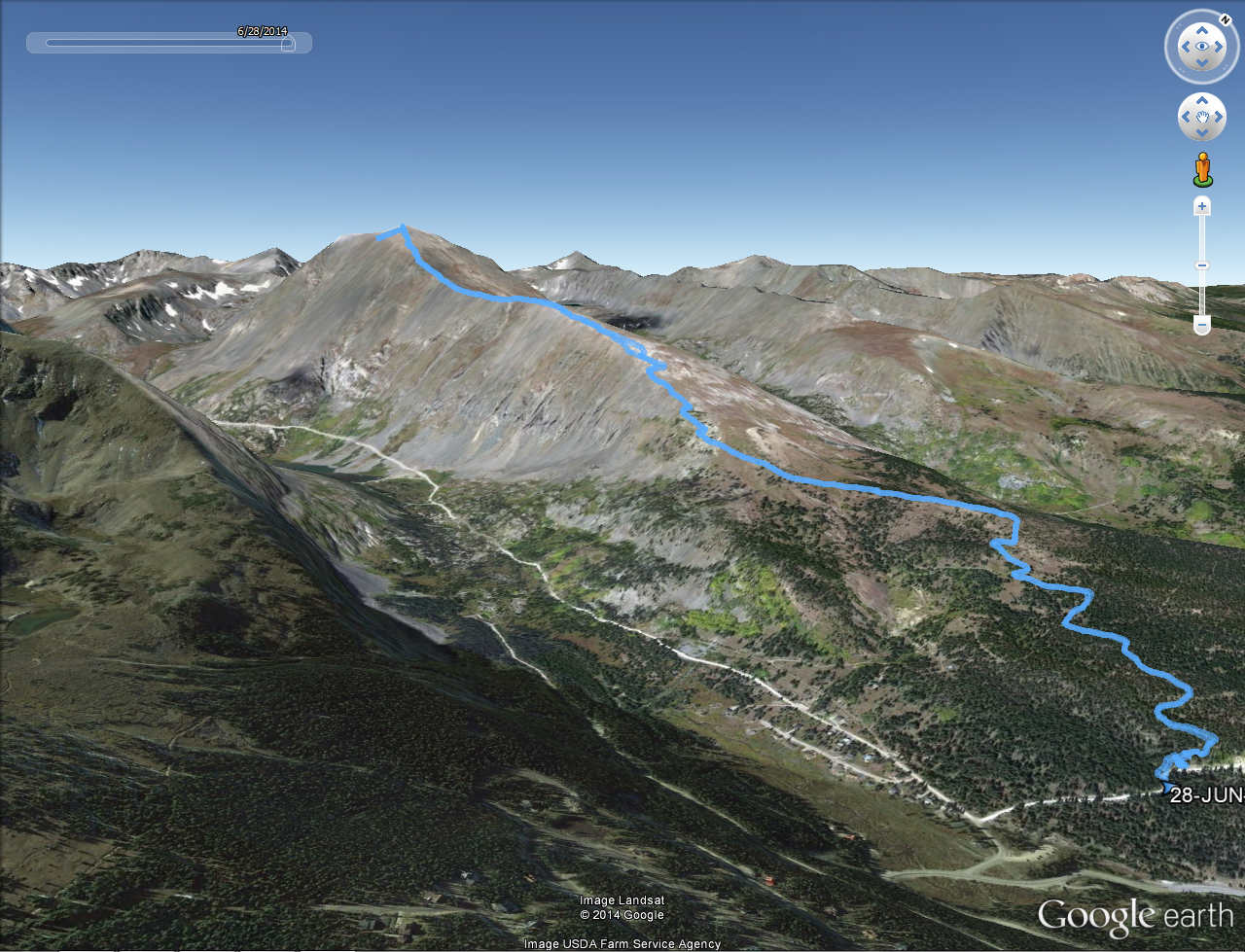 It felt as though we had only just closed our eyes when we were gently roused by the sounds of The Head and the Heart streaming out of the phone at 3:45 am on Saturday morning. To be honest, we were so excited about our third 14er summit attempt that sleep was light, and soft music was the only motivation needed to throw on our clothes and boots and hit the road for Quandary Peak. This majestic peak looms to the south of the quaint but vibrant town of Breckenridge, CO. It is the 13th highest peak in Colorado. Year-round it tempts hikers, skiers, climbers, and wildlife enthusiasts to its summit.

We reached Breckenridge at about 5:50 am and were greeted by a somnolent little town with closed signs in all the windows. We waited at a gas station a few minutes until six to fuel up on snacks and then continued on. We reached the trailhead at about 6:15 am and were able to park in the second parking lot at the base of the trailhead. There is another lot further down closer to Hwy 9 with additional parking and restrooms (port-o-pots). There were a few cars and eager hikers already there, and we joined  with similar enthusiasm.

The trail immediately begins to climb among the trees which wasn’t too surprising when we realized the distance to the summit was only 3.4 miles. The sun wasn’t out at the start of the climb, and a nice chill settled on the forest floor. A bridge we crossed still had ice on it, though the trail was free of snow until about half a mile past treeline. The first mile and half was simple trekking through a lodgepole pine forest. Eventually it opened up to views of Tenmile range and finally thinned out at treeline. Seen below are photos from the start of the hike. 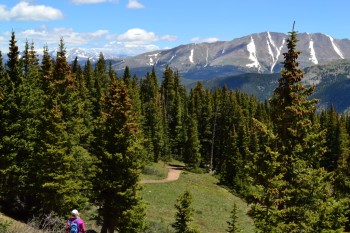 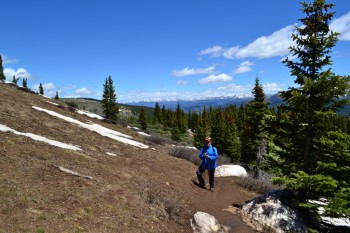 We were then greeted with a series of steep switchbacks and loose scree, but our goal was now in sight. We could see Quandary in the distance. It looked quite far away and much higher than us. We focused on moving and breathing. At this point in the hike, we caught up to a youth group that had started about 20 min ahead of us. Interestingly, the group was in shorts and t-shirts. It was a bit frustrating once the trail flattened out to a traverse, because the group now sped up and passed us. They would then stop again a few hundred feet ahead of us, and we’d have to play the passing game again. We tried to keep a positive attitude, and quietly laughed as the leader sang out “the redeemed shall not fall” as the group tried not to stumble on the miles of talus. It was cool to see a group high schoolers out enjoying nature and being active. Seen below are photos as we crossed the traverse and looked up to the summit as well as some photos looking back down after we were a few hundred feet higher. Notice how steep it appears… 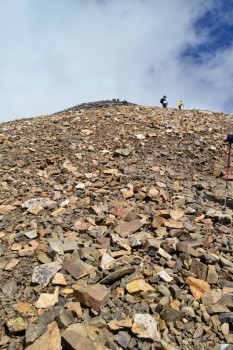 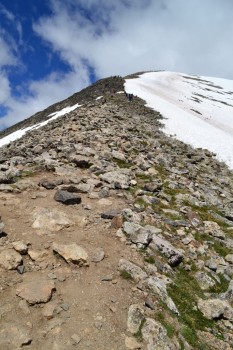 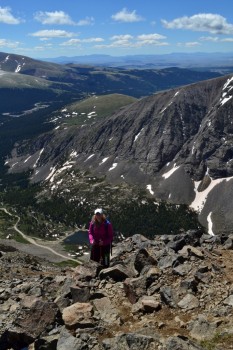 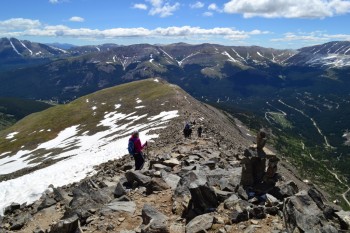 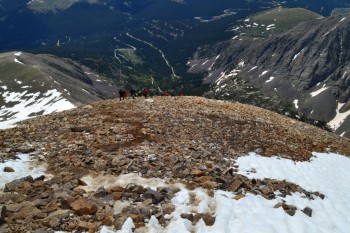 As we got closer and closer to the summit, the temperature dropped sharply and the wind picked up. The final push to the summit was still covered in snow. We carried hiking poles with us for stability but nothing could protect us from the 60 mph winds that were whipping across the top of this mountain. When we reached the summit we dove for a wind shelter, but it helped very little. We were so cold that we huddled together for warmth. Getting the summit sign out proved very difficult as the wind kept trying to steal it away. The clouds gave way to sweeping views of multiple ranges in all directions. We tried our best to get a few nice photos and the mandatory summit shot. Seen below are pictures from 14,265 ft above the world. 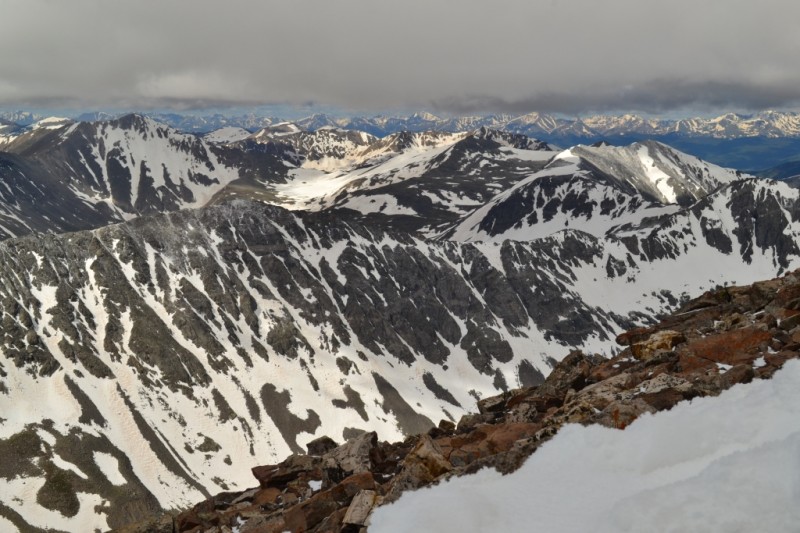 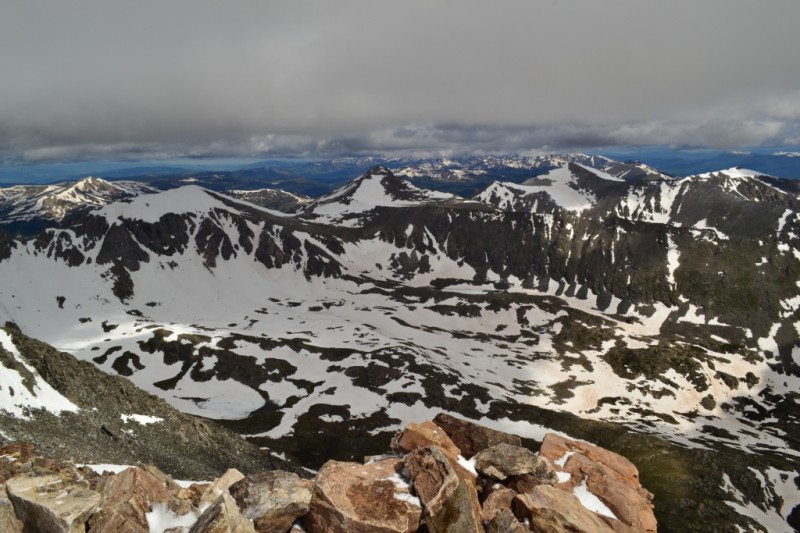 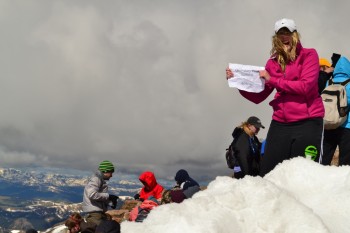 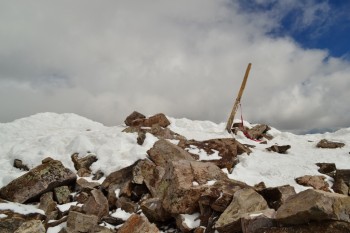 A group of guys at the summit took their shirts off for a goofy photo. They were screaming. The wind was too much, and another gust reminded us that 14,000 feet in the air is not supposed to be an inviting inhabitable place. We quickly gathered our stuff and began the descent. This may have been the most difficult part of the entire journey. The wind was blowing so hard it was difficult to maintain stability in the snow to traverse across the top and head back down the snow drift. The temperature was so low that our hands became completely numb. Numb as in they felt like large bricks that didn’t want to move. It was not fun, and another reminder to always pack extra gloves and warmer clothes even if it’s a late June summer day. As we dropped back down a few hundred feet, things began to look more positive again. Feeling came back in our fingertips and hands, and we realized we beat the crowd in summiting. There were many people heading up huffing and puffing and cursing the incline. It felt good to head down. It should be noted that going down is not easy. There is a lot of loose scree on this route, and careful footing is essential. As we returned to the traverse we spotted a mountain goat. He came a little too close for comfort for a while, and then proceeded to just run off the side of the mountain, leaping through the snow. It was incredible to watch. We envied his agility in the snow. We got a few cool photos, and then hid in this nook to have some delicious PB&Js, gatorade, and bananas. Many hikers were envious of our little cave. Seen below are the blue lakes, our friend, and our shelter. 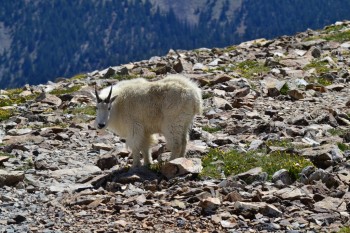 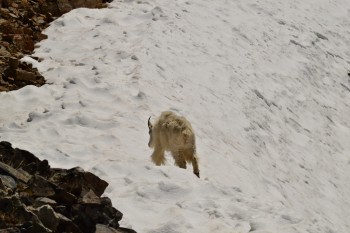 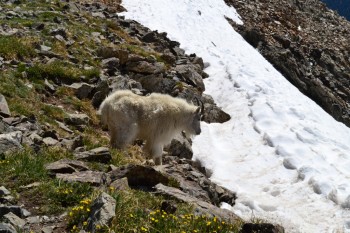 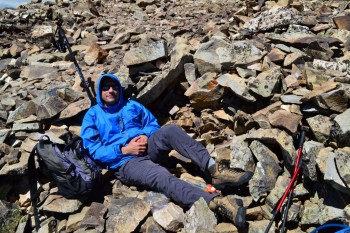 After lunch, we headed back down. It was a perfect clear blue day now, and the temperatures at lower elevations were comfortable. More hikers were coming up in shorts and t-shirts ready to summit. We hoped for their sake the summit was tamer now. We took our time descending as we snapped photos, searched for wildlife, and enjoyed each other’s company. We had climbed our third 14er and completed a work-out that is quite a challenge and rewarding. We highly recommend Quandary. It may be one of the “easier” 14ers, but that doesn’t make it easy. It was a tough work-out, and if you are coming from out of town, get acclimated first and be in shape to get the most enjoyable experience.

We headed back into town to get lunch and shop around Main street. We then checked into our hotel at The Village which is located at the base of Peak 9. After soaking in the hot-tubs and relaxing we had dinner. Getting up at 3:45 am made sleep come easy. Coming soon: Day 2 of Breck weekend! Oh and please remember to vote for Thomas’s photo, 2 weeks left. 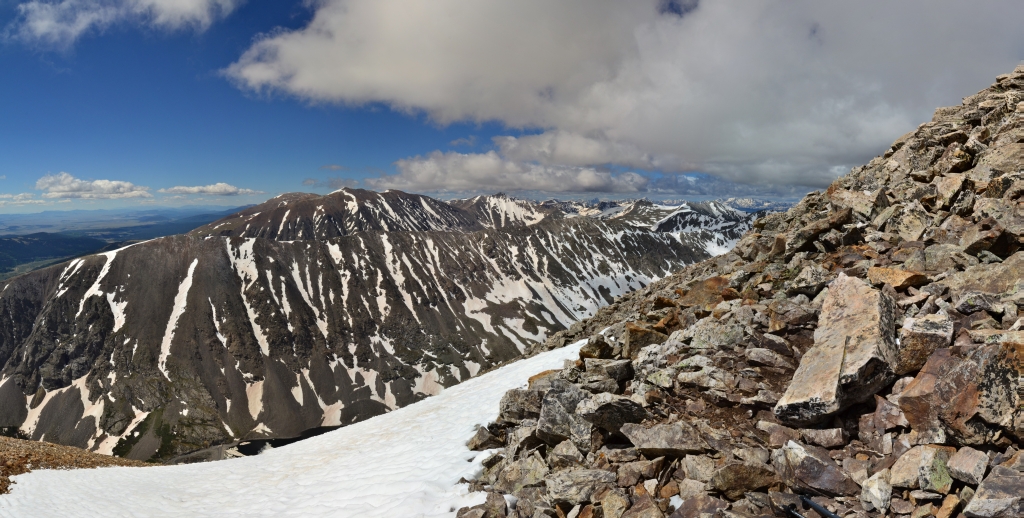