Fungi and Lichens of our Hikes

“Lichens are fungus who have discovered agriculture.”
–Trevor Goward

Fungi are really pretty amazing.  They include a morphologically and genetically diverse group of organisms from yeasts which gives us beer, bread, and Cheez-Its, to giant puffballs which are eaten (cooked) in many parts of the world.  The diversity of mushrooms in Colorado is stunning and we hope to find as fungi as we can.

Lichens are some of the most often overlooked flora seen on hikes, or so I have noticed from my outings.  They are a symbiotic relationship of organisms from up to three different kingdoms. One of the organisms is always a fungus and the other or others are typically an algae or cyanobacteria. Lichen are extremophiles and can survive at high altitudes and very cold temperatures.  These communities of extreme life can turn a monochromatic rock wall into a natural painting worthy of hanging next to a Jackson Pollock.

While not experts in lichenology we will attempt to classify the lichens as best we can; comments are appreciated and we hope that you enjoy the beauty and complexity in these organisms as much as we do.  Below are some of the Lichens we have found on our treks. This page is broken down into two sections, Fungi and Lichens, and then arranged alphabetically by genus. 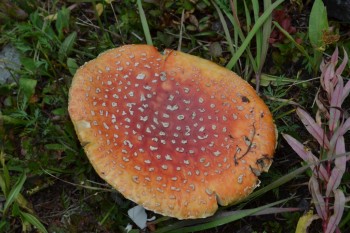 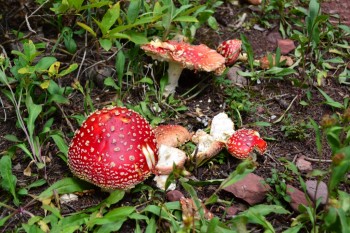 There are a number of Amanita species in Colorado and even more worldwide. These include A. phalloides, also known as Death Cap, and A. ocreata, also known as Destroying Angel. Some of the Amanitas are edible, but it is advised not to eat any member of this genus. The Fly Agaric species common to Colorado pine forests falls in a strange category of almost a hallucinogenic mushroom, although it is certainly psychoactive. It contains small amounts of muscarine (hence the epithet muscaria) but also contains ibotenic acid. Ibotenic acid is converted in the human body to muscimol. Muscimol is a GABA agonist. Due to this fact it is a strong depressant, similar to ethanol (drinking alcohol). Due to extreme variations in the content ibotenic acid in wild mushrooms it is almost impossible to predict what effect a given dose of mushroom will yield. Thus, poisonings are common when this fungus is consumed. This makes it a less than ideal recreational drug. However, this has not stopped consumption of this ‘shroom and it has a very long history in the world of hallucinogens. Most notably it can be seen represented in amusement parks and in stories like Alice in Wonderland. This mushroom is thought to perhaps cause micropsia and macropsia (experiencing things as much smaller or larger than they really are). 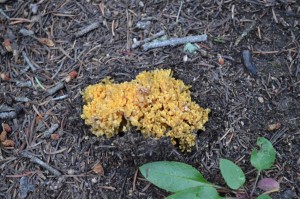 While hiking towards the rainbow lakes I spotted this strange looking fungus. It is probably Ramaria largentii.This fungus belongs to a morphologically category called the coral fungi. You can see that it looks quite it bit like a coral found in the ocean. Mycological folks claim that it can be eaten, but with caution, since it can easily be confused with R. formosa and R. pallida. 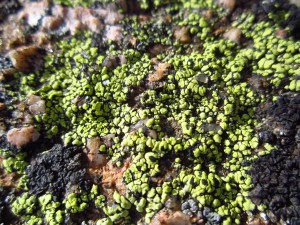 While we were taking a break at the Irving homestead we set up camp on a large granite rock.  There were all sorts of lichens growing on it and this neon green one caught my eye.  It appears to be squamulose and of the genus Rhizocarpon.  The quartz crystals are especially nice with the lichen growing around them.

One thought on “Fungi and Lichens of our Hikes”