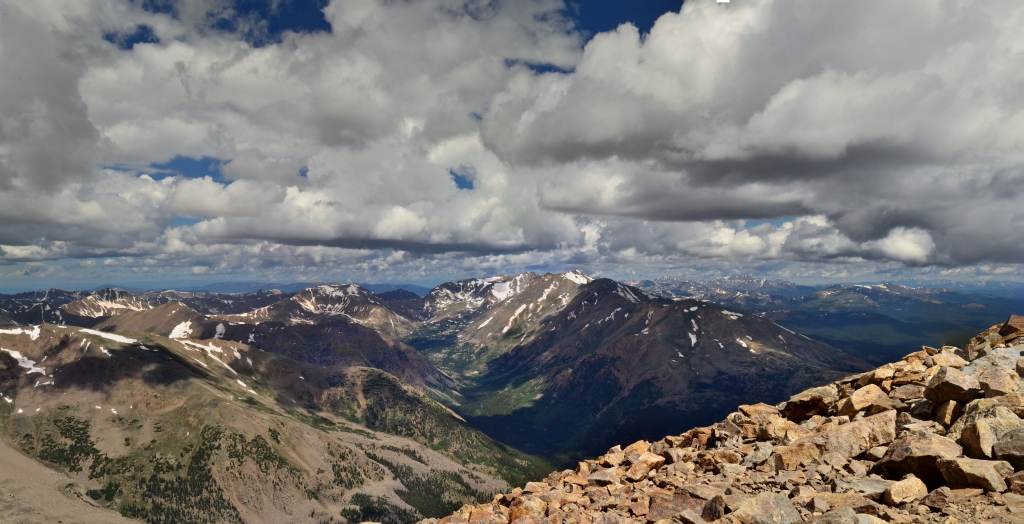 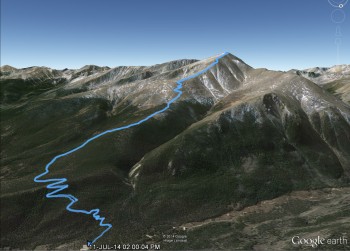 All week long we constantly monitored Mountain Forecast for conditions atop Colorado’s highest peak, Mount Elbert, hoping for an opportunity to summit this spectacular mountain. Nestled about 115 miles southwest of Denver in the Sawatch Range, this gentle giant rests majestically in the San Isabel National Forest. In addition to laying claim to Colorado’s highest point, Elbert also ranks 2nd in the race to the sky in the contiguous US falling only slightly behind California’s Mt. Whitney which sits at 14,505, a mere 72 higher. Interestingly, Elbert hasn’t even been able to peacefully claim its record here in Colorado through the years. Just north of the peak sits Mt. Massive. Massive is essentially a row of peaks, all leading up to a pinnacle of one high point on the central peak which measures 14,428 ft. Through the years, there have been collective groups arguing for Massive to be named the highest peak in Colorado. Hikers/wilderness enthusiasts that got a a little too excited about this race took to building cairns on the summits of either peak hoping to gain a few feet of mountain height and with it a title. This battle resulted in Team Elbert or Team Massive simply tearing down each other’s work. Eventually, these futile efforts ceased leaving Elbert rightfully dubbed the highest Coloradoan Peak.

We used vacations days for a summit attempt on Friday, in order to avoid large hiking parties that often descend upon the 14ers on a July Sat. or Sunday morning. Since the trailhead is relatively far from our house, we opted for a Thursday night campout near the TH. Luckily, Mt. Elbert and Mt. Massive rise above perfect campgrounds. There are multiple fabulous spots located at Halfmoon east and west campgrounds as well as the Elbert Creek Campground just across the dirt road from the Elbert Northeast Ridge Trailhead. We were really hoping to get one of these campsites, but to our surprise they were already full at 6:00 pm on Thursday. We kept going north until the road turns into a 4WD only road and followed it past the pay campsites. We stumbled upon an amazing primitive site that overlooks the Elbert creek. It was perfect. We set up camp and roasted marshmallows. The peaceful sound of the river calmed us after a long trek into the mountains. Seen below are photos of our campsite. 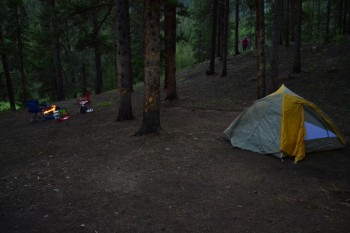 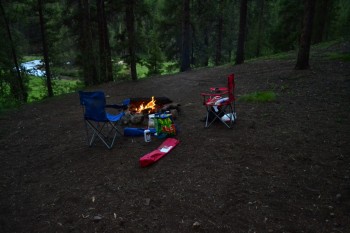 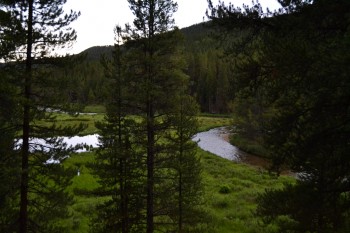 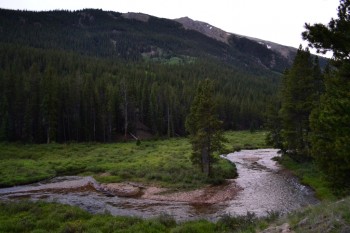 At dusk it began to rain. We crawled into the tent for an early slumber that didn’t come easily. The night was a bit of a rough one, with our cheap sleeping bag pads not cutting it. We finally fell asleep and when first light came through, we weren’t quite ready to rise. But the mountain we were planning on climbing is tall and steep and long to the summit so we threw on our boots and made the short drive to the trailhead. After eating a a snack and prepping, we were on the trail at 7:15 am. The Northeast trailhead quickly connects hikers to the Colorado Trail. We followed the Colorado Trail through a dense lodgepole pine forest for 1.1 miles where it intersected with the trail that leads to the Elbert Summit. The signage is very clear here, and we had no trouble route finding. Since, we began this hike around 10,000 feet, our trek below treeline seemed to take forever. There were also very steep sections through the trees that allowed us to shed layers pretty early on in the trek. As we reached treeline, the canopy opened up to beautiful views of the valley below as well as our first view of one of Elbert’s two false summits. Seen below are photos from the trees, and treeline, and the first of the false summits. 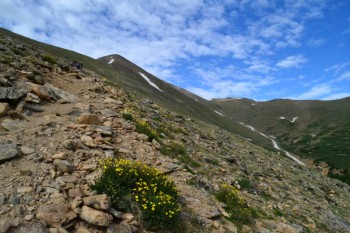 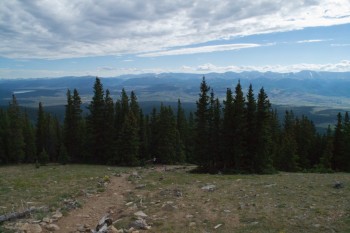 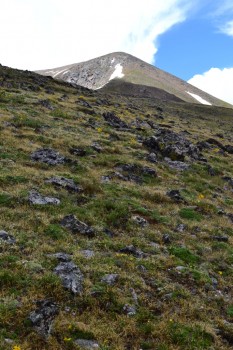 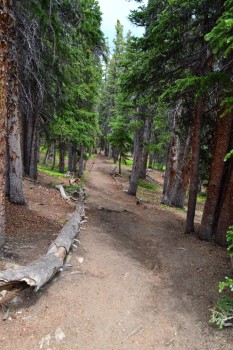 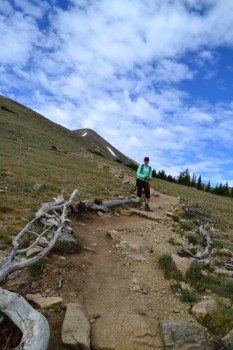 Mosquitoes began to attack ferociously right before we left treeline. We had to keep moving or we would be swarmed. This was quite surprising to us considering we were over 12,000 feet in elevation at this point. We were about 2.3 miles into the hike now and realized we still had over 2,000 feet to climb in about 2.2 miles. The first false summit loomed in front of us, teasing us with hope. We steadily climbed until just below this first summit. The trail turned very very steep here and was comprised of loose scree and dirt. Trekking poles came in handy for balance for this portion of the ascent. It was mentally a very challenging portion of the hike because we had reached 13,000 feet, air was thin, and the trail was visually daunting. Once we got past this point, we saw our next false summit, but thanks to our handy GPS we knew we had only about 800 feet left to climb. We were almost there! Seen below is the final 200 foot pitch and ridge line to the real summit. 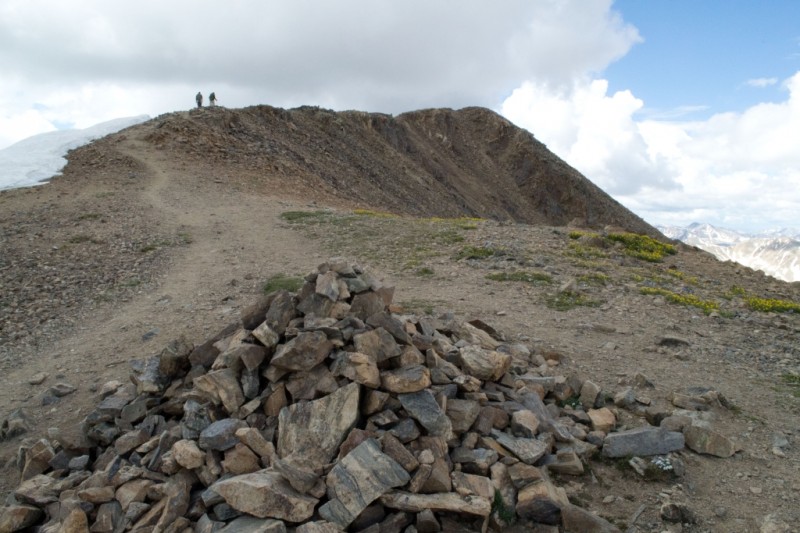 A few more feet up, and we were there. We had reached our goal in about 3 hr 45 min. which wasn’t too bad considering we paused for some photos and sunscreen along the way. The conditions were perfect on top with minimal wind and adequate sunshine to keep the temperatures reasonable. We sat and enjoyed PB&J bagels and water to refuel. Seen below are 360 views from 14,433 feet. 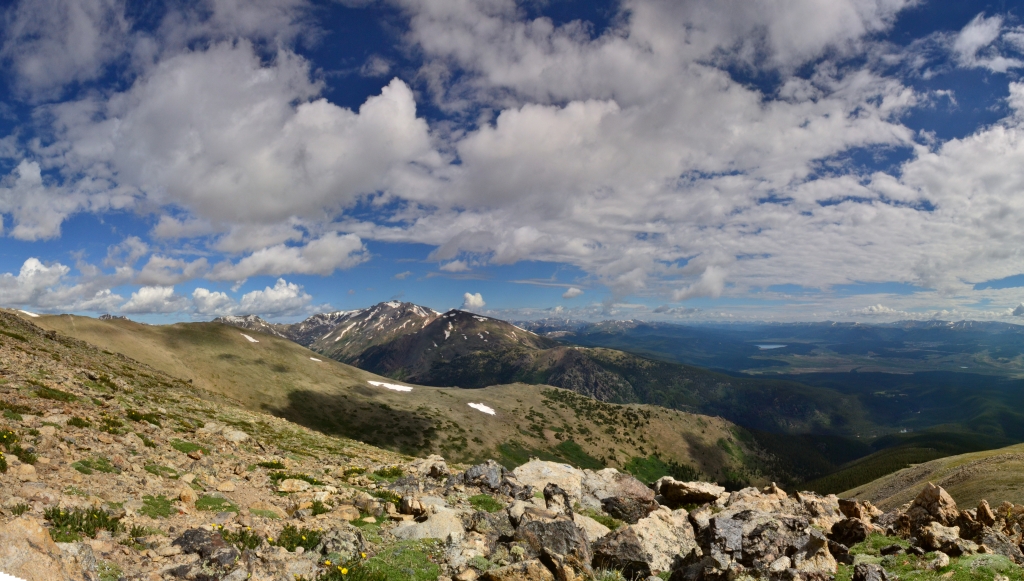 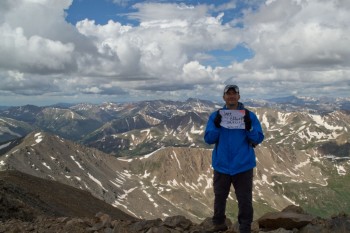 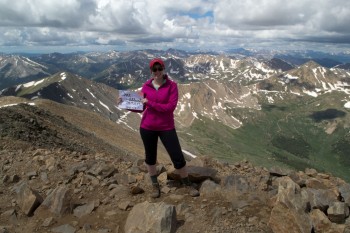 Seen below is a video on top of the summit and ridge right before we headed down.

The weather report said pm rain showers were very likely, so we headed down after lunch. We were surprised to see so many people heading up the mountain as rain clouds filled the sky behind us. The trek down was hard in a different way than going up. It may have been easier cardiovascularly speaking, but was much more difficult on the quads. The thought of the storm cloud getting closer kept us moving very very quickly despite the build up of lactic acid in our legs. The saying “going up is optional, going down is mandatory” echoed in our heads.

As we neared treeline it began to storm and we realized that the raindrops were in fact hail drops. We knew that light showers were a possibility in the pm, but we didn’t expect hail and lightning. The thunder was ferocious and instilled quite a bit of fear in our hearts. We wanted to jog down, and did at some points, but the steepness and loose nature of the climb down prevented us from descending too quickly. Even as we saw ground-to-air lightning strikes and heard mean sounding thunder we still continued to see hikers climbing up out of treeline. We want to take this time to warn hikers that the danger of lightning is real. On Friday, the day of our hike, in probably the same storm, a woman was killed and seven were injured by a lightning strike on the Ute Crossing Trail in Rocky Mountain National Park. We were deeply saddened to learn about this and then shocked to learn of a second fatality on Saturday when four individuals were struck on Trail Ridge Road in Rocky Mountain National Park.

We know how tempting it is to keep climbing. And we know how much effort goes into planning trips to the mountains, especially when you are from out of town. But trust us, the summit is not worth your life, and you can’t outrun a storm. Please stay safe and if you see storm clouds in the mountain get down as quickly as you safely can. Our condolences and thoughts are with the families of those who lost their lives this weekend. Below is a picture of the storm as it passed by us. 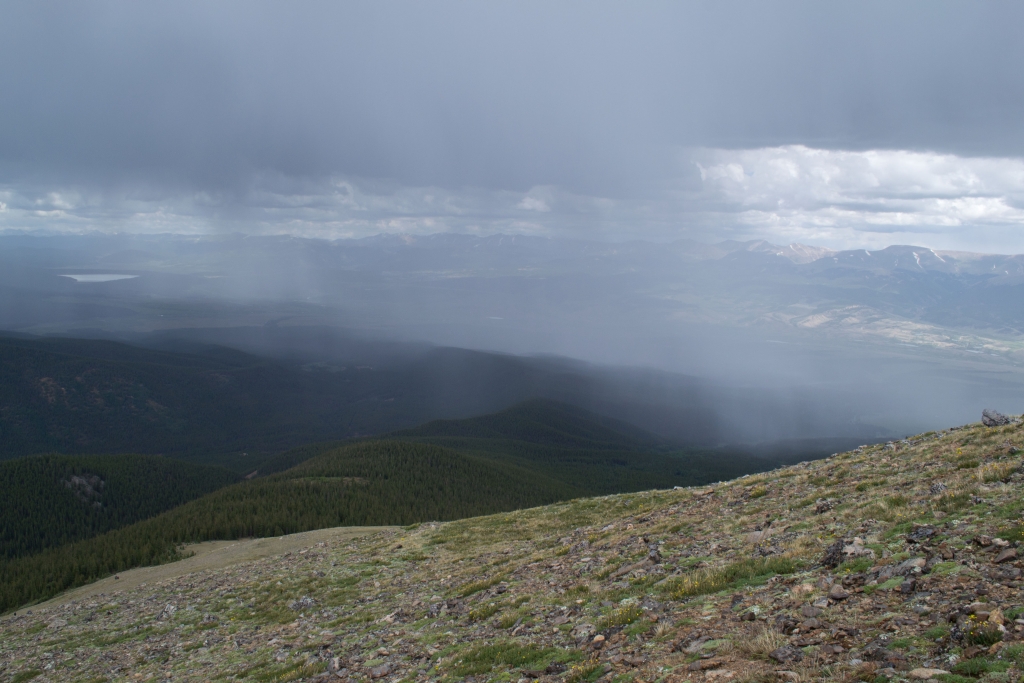 After reaching treeline it was a long hike back through the forest to the car. The scenery is relatively monothematic in the trees and we were happy when we arrived back at the car. When we reached the car the second wave of the storm hit and it began to rain very hard. We threw our gear in the back and headed over to Leadville for some grub.

If you make it up to Leadville and the Sawatch Range make sure to stop by the Silver Dollar Saloon. Opening in 1883 this famous bar served the likes of Doc Holliday (who had his last gunfight in front of the bar), Wyatt Earp, Oscar Wilde, and many others who passed through the doors of this majestic bar. The town is extremely friendly and they have many outdoor events such as the Leadville 50 and 100 mile mountain bike races.

It had been a hard day, and even scary at times, and we were thankful for another day in the mountains.