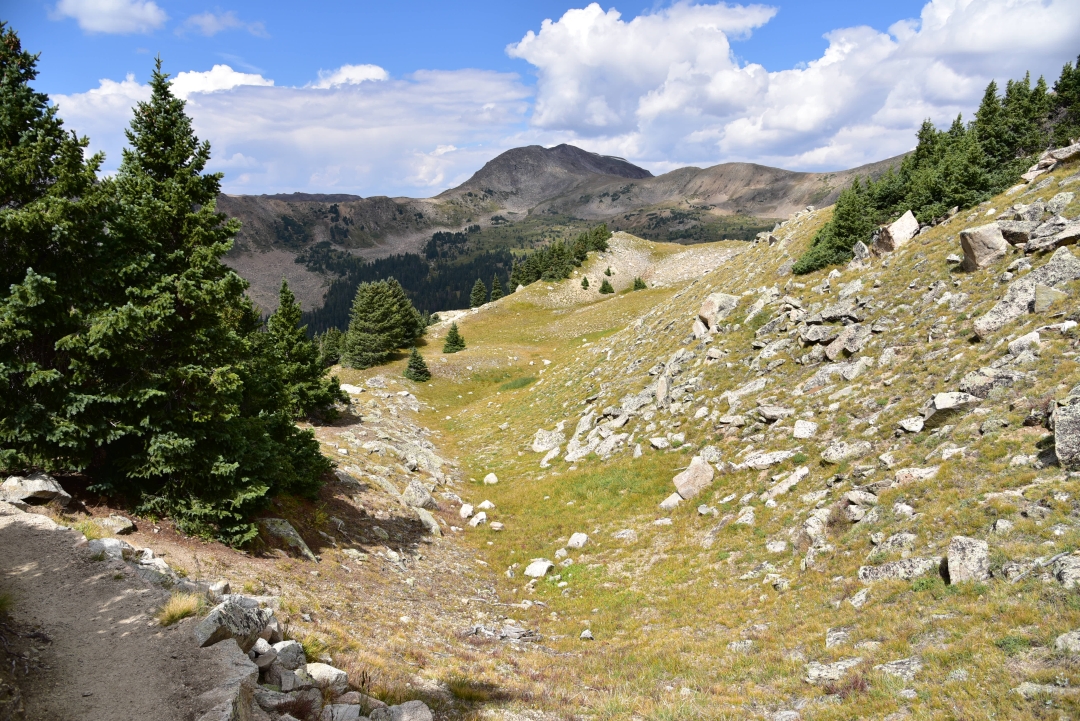 It’s currently October 9th and already a fresh blanket of snow has fallen on the front range. Though not the typical dry fluffy snow of later in the season, the wet slushy puddles have definitely reminded us that the warm summer months are gone.  As such, we reflect back on our last snow-free 14er of the season, Mount Yale which we climbed exactly one month ago from today. Mount Yale is another one of the gentle Sawatch Range giants nestled in the Collegiate Peaks just west of the Buena Vista. When we say gentle, we simply mean a lack of technicality to the climb. In no means was the peak gentle in distance and elevation gain. The trailhead to the peak is located just right off of Cottonwood Pass. A short 12 mile or so drive on a smooth paved road leads to a smooth paved parking lot and easy access to adventure. Nonetheless, the long distance of TH from the Denver metro area required an overnight camp in the nearby Collegiate Peaks Campground. Despite sleep deprivation and a large workload in the days proceeding, we shrugged off our exhaustion, drove to our destination, and set up camp just before the sun set. The moon remained bright this night. Once our eyes adjusted to the darkness of the night, we could actually see quite well. We hunkered down for what we thought would be a cold night, but to our surprise, the early fall weather did not make us suffer. Even at over 9,000 feet, temperatures did not drop below 48 or 49 degrees F. Throughout the night, there was the occassional rustle of the leaves and perhaps a mouse or two seeking shelter near our tent, but otherwise relatively quiet. When the sun rose, we reluctantly crawled out of our  shelter and drove the half mile down the road to the TH.

Though not completely full at 6:30 in the morning, the parking lot did have several other hikers prepping for their summit attempts. September truly can be one of the most spectacular times of year to hike and climb in Colorado. The crowds near popular THs are reduced, the fall foliage exudes color in every direction and the crispness in the air puts a bit of urgency in the step. Thunderstorms are less common, but snow and ice are known to commonly appear, particularly when one is close to the summit enjoying lunch or any other such activities. We started the climb about 7:00 am. The initial grade of the trail was mild and enjoyable. The aspen and lodgepole pine forest provided a cool canopy. The sounds of the Delaney Creek could be heard as we wove through the forest. About a mile into our hike, we crossed the creek over a log bridge (the first of many crossings it would seem). Shortly after we reached a trail junction. Head left for Browns Pass/Hartenstein Lake and right for Mt. Yale. Seen below are photos from the beginning our our hike. 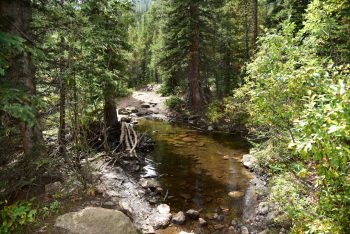 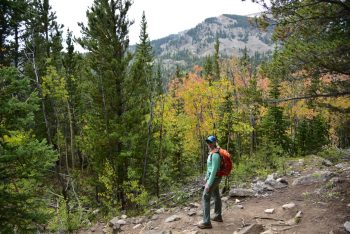 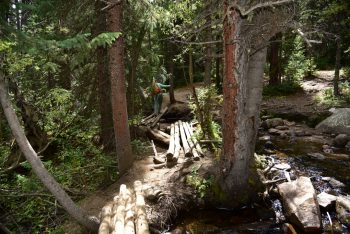 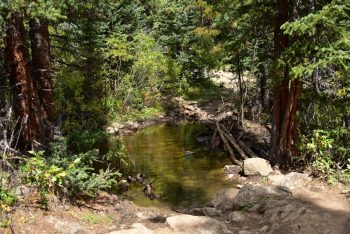 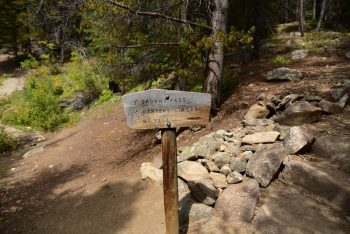 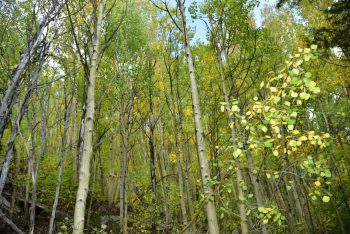 There were several flat areas of the initial portion of the hike which had us a bit concerned for the work load that was ahead. Just as we began to think we might actually be getting off easy, we reached a series of brutal switchbacks near 11,200 feet. We followed the steep trail up the hillside through more and more trees and thought that we would never reach treeline. Several hiking parties were passed during this time, and we kept our quick pace if only to avoid the constant leap frogging that can occur when sharing the trail. Everything was still so green and beautiful on this great trail. Seen below are photographs before we completely left the trees and green vegetation above 12,000 feet. 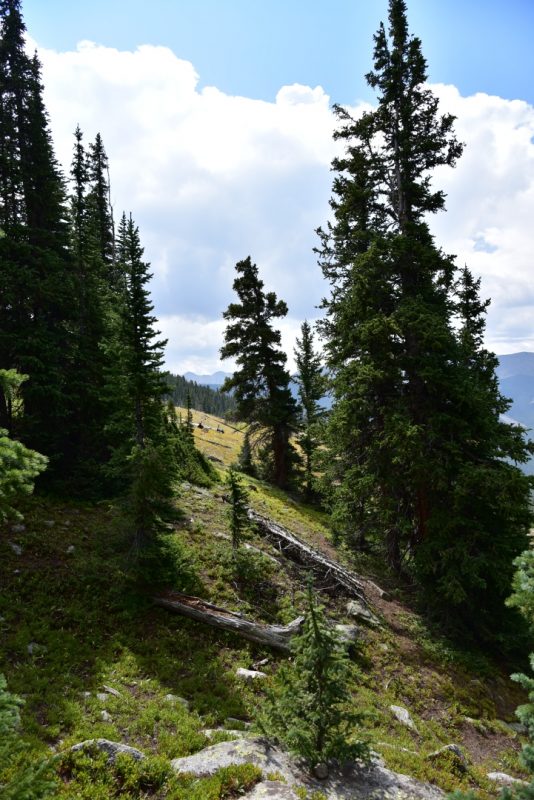 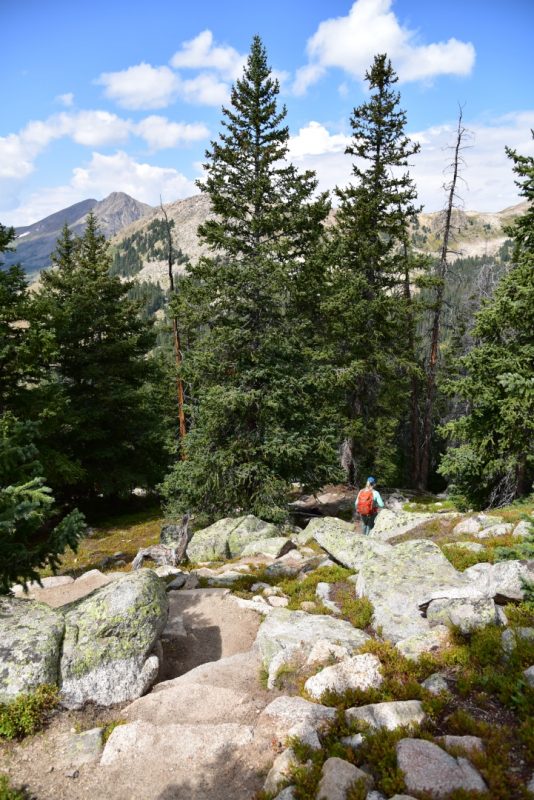 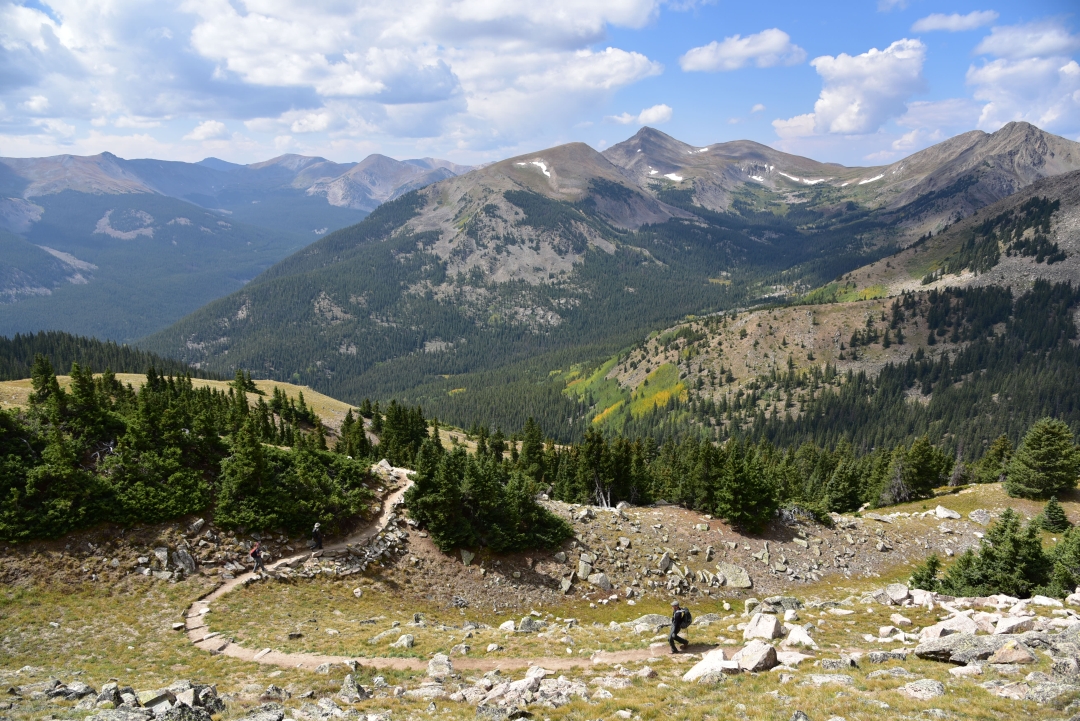 Aftering leaving the trees, we headed northeast toward Yale’s upper west slopes. Much of the remaining route was visible to us now. We followed a gentle trail on the shoulder of the mountain for a while soaking in the surrounding grandeur. A large boulder provided a brief break, as we snacked on a childhood favorite, pop-tarts. The gas station attendent the previous night had given us a hard time for our purchase of pop-tarts and barbeque potatoe chips. It was perfect on the mountainside this day. Near 13, 200 feet, a steep trail greeted us. We had nearly 800 feet to climb up in a very short distance to reach the ridge and final section to the summit. Nearly everyone we saw heading up this portion appeared to be on the struggle bus. It was a tough bit of work and the spot in which our exhaustion from the previous week began to really show.  Seen below are photos of the shoulder of the mountain and struggle up the ridge. 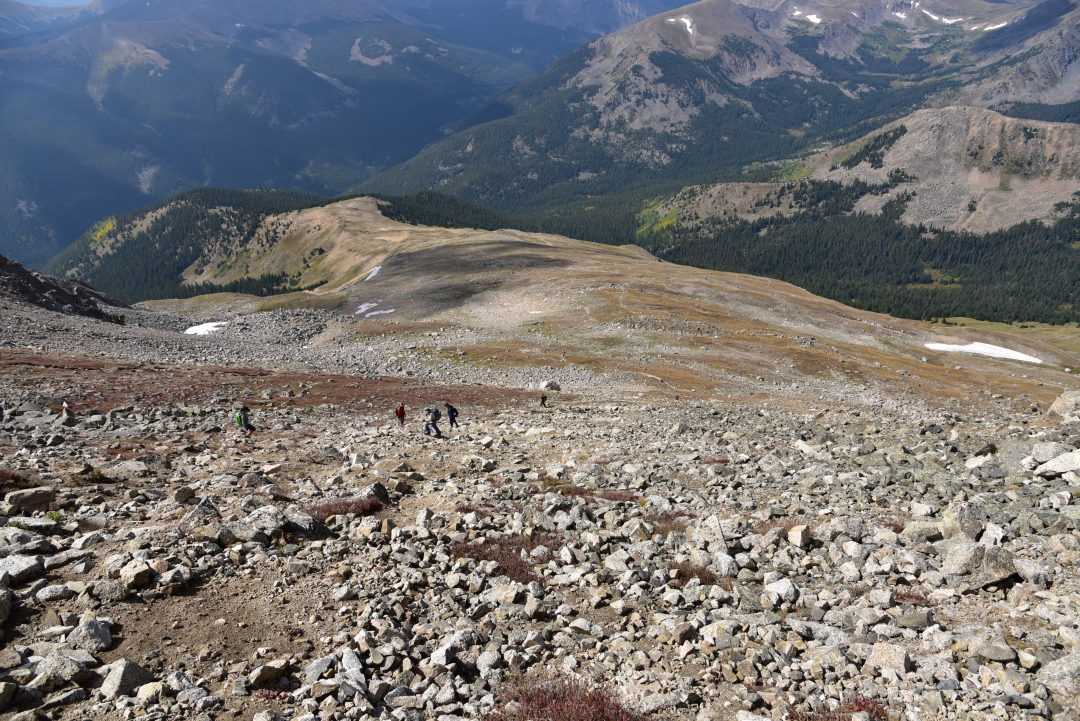 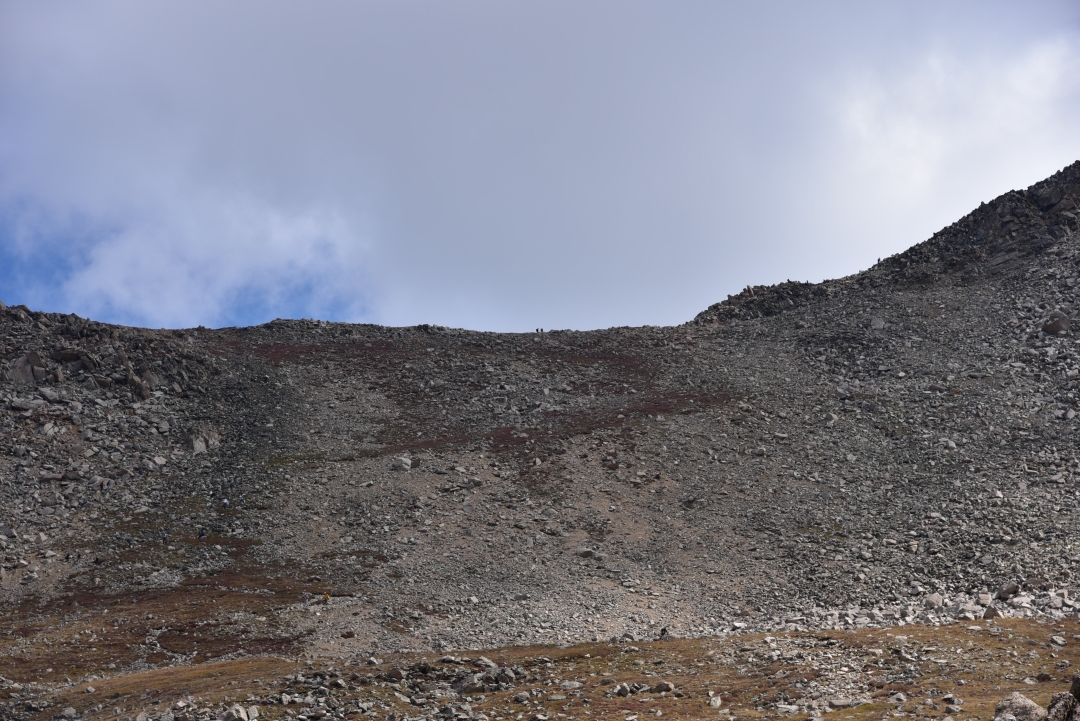 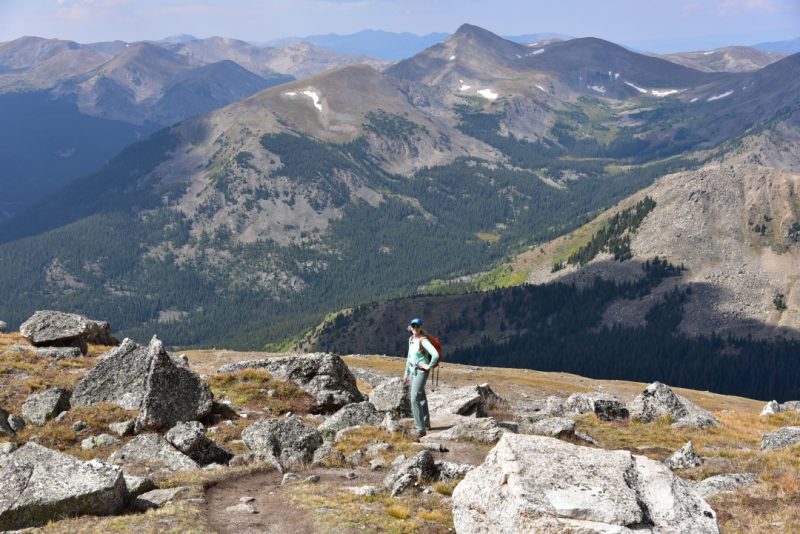 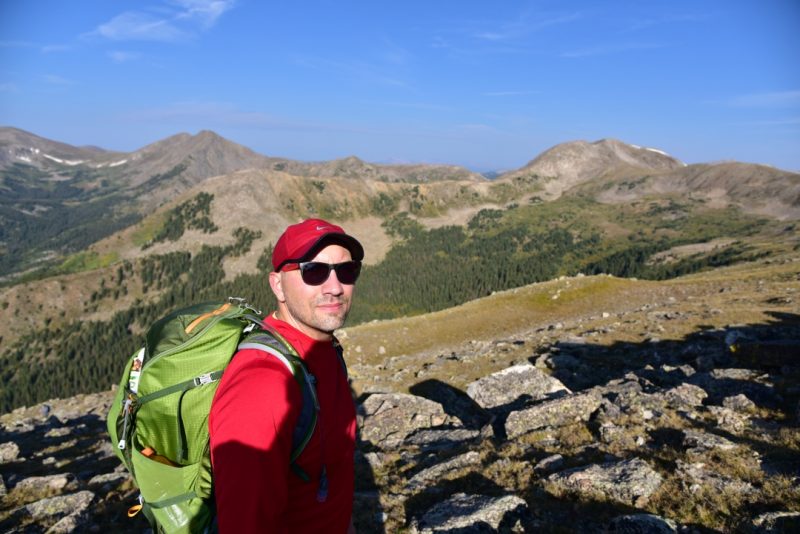 Once on the ridge, the trail to the summit disappears. There is several class 2 rock to navigate, and many places where the route can venture into difficult class 2 if chosen.  It was much more fun and interesting than the rest of the hike, and we forgot for a while that we were tired and almost at 14,000 feet. We scrambled gleefully along the ridgecrest, primarily sticking to the right side. Several cairns were placed along the route to provide gentle guidance. They led the correct way for the most part. It only took about 15 minutes to reach the summit once we were on the ridgecrest. The summit is not really the most comfortable summit compared to the rest of the 14er tops we have visited. Jagged rocks protrude everywhere. Several other hiking parties were on the summit or got there shortly after us, and navigating around the rock was even more difficult dodging other people. We took a few photos, but spent very little time here. The clouds that were building caused a big drop in the temperature, and we needed to get moving. 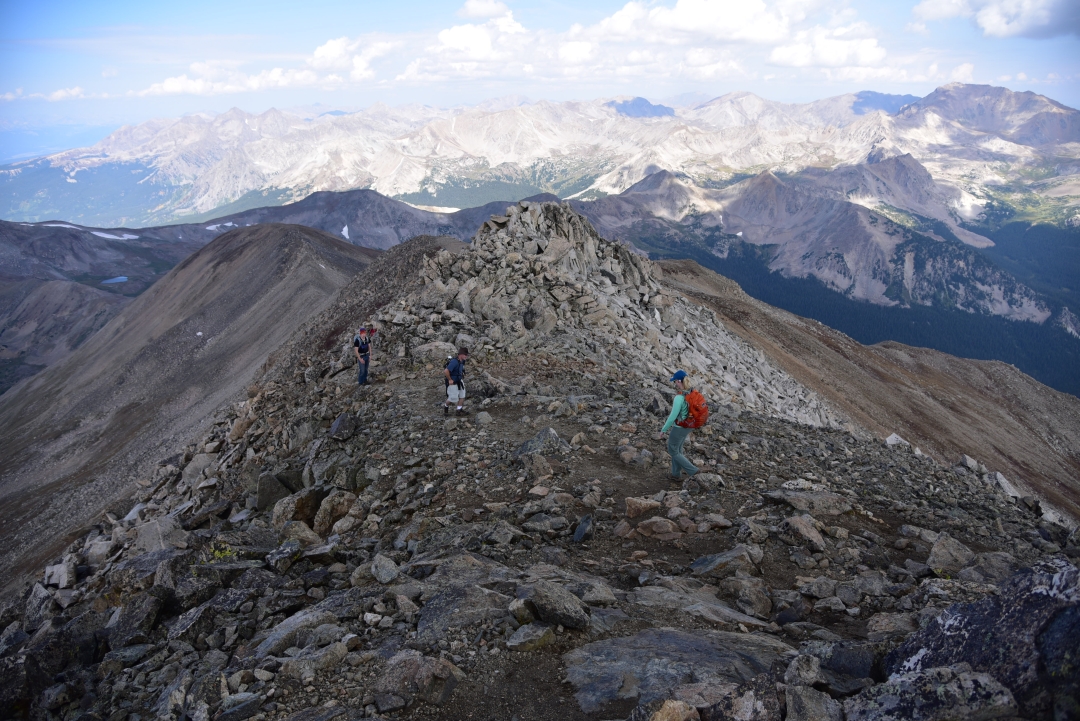 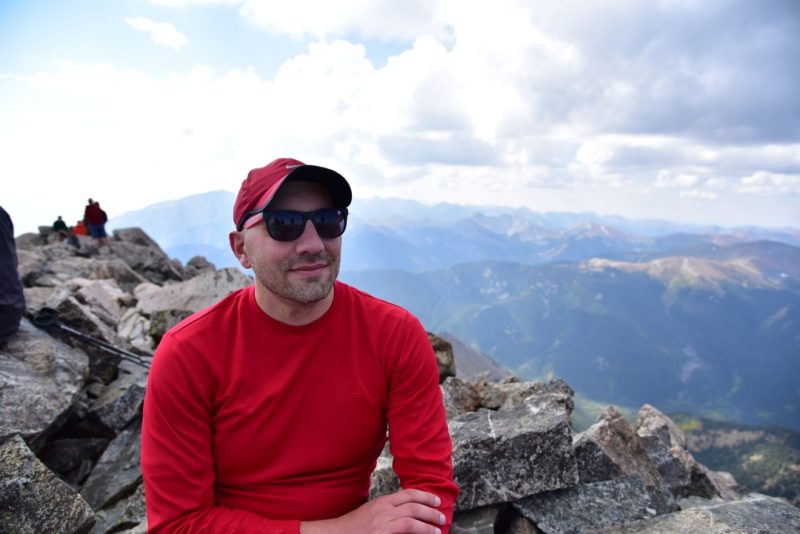 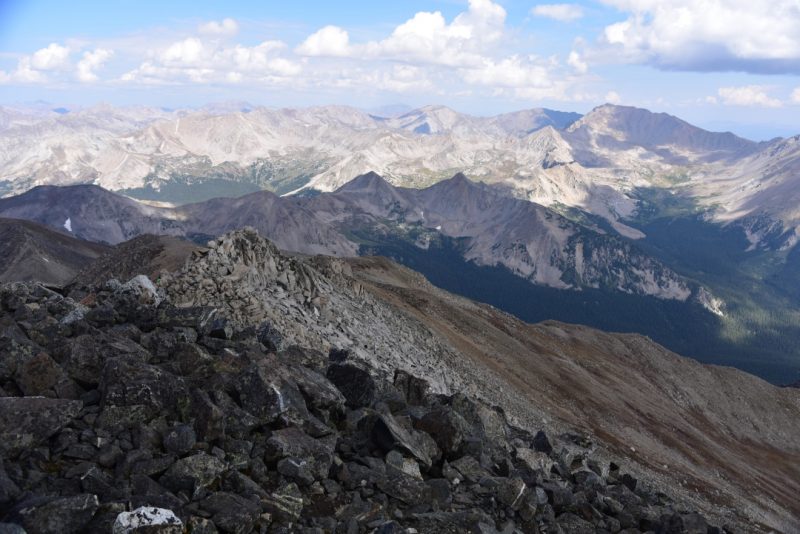 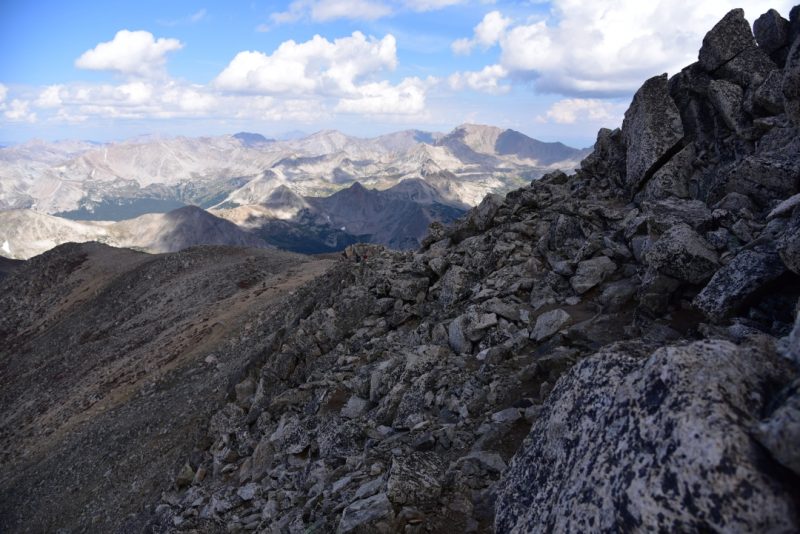 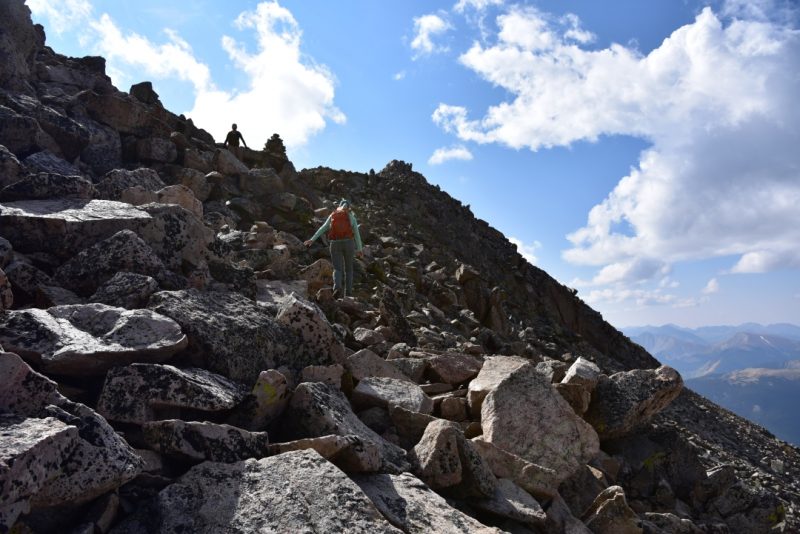 As we carefully downclimbed the ridgecrest, the sleet began. It was cold and sharp to the skin, but was not heavy enough to affect our visibility. We were very thankful for this rather than a thunderstorm. Nonetheless, we moved very quickly because we still weren’t sure that a thunderstorm wouldn’t also move this way. As we reached treeline, the weather cleared for a while. Once again we were greeted with endless blue skies and greenery. On the way down, we stopped next to a hidden creek and small waterfall for lunch which consisted of bbq chips and chicken jerky. The trail seemed longer on the way down than on the way up as it always seems to. With about 1.5 miles left in the journey, it began to rain. For the first time in the life of our hiking packs, we were able to utilize our cool pack rain covers. Sometimes it’s the little things in life like the joy of using a neat feature on a day pack or the feel of the grip of  hiking boots on smooth granite that add to our great experience in the backcountry.  In the distance, we heard thunder and hoped that all the people continuing up the peak were okay. Shortly thereafter, we reached the truck. In total we hiked/climbed approximately 9.5 miles and gained a total of 4,300 feet.  The Sawatch Range has 15 named/ranked peaks above 14,000 feet. After our summit of Mount Yale, we have now climbed 9 of them. While Yale wasn’t our favorite of this range (Mount of the Holy Cross is hard to beat here), it was certainly beautiful and well worth the journey. Seen below is a gallery highlighting the rest of the day and hike.