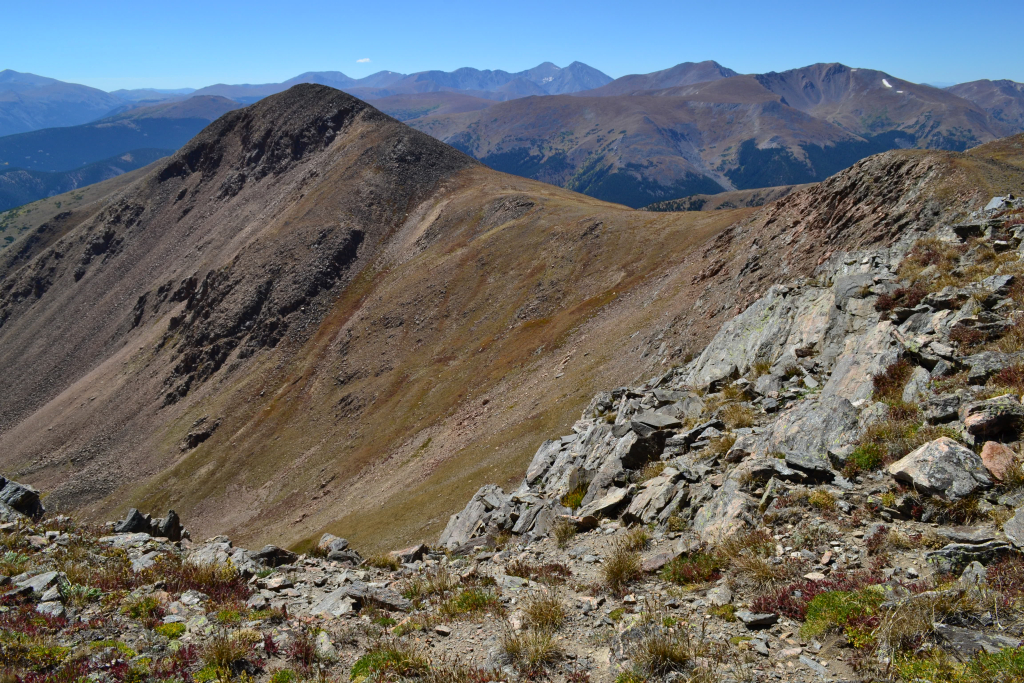 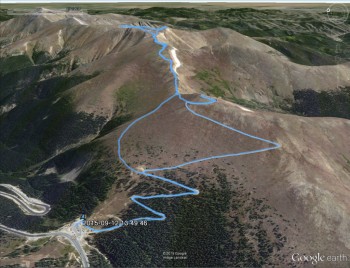 About two week ago on (September 12th) we drove up the long winding Hwy 40 towards Winter Park, CO. Instead of continuing on to the snow covered slopes as we were accustomed to in the cold winter months, we stopped at Berthoud Pass. The pass sits at an elevation of 11,307 feet and provides access to the famous Continental Divide Trail and a plethora of peaks to tag. We spent our last two weekends high alpine camping and climbing long, high elevation gain 14ers and thus sought 13er Mt. Flora for a relaxing change of pace.

A warm Starbucks latte, pumpkin bread, and the slight hues of orange and yellow popping in and out of view on the drive up led to excitement and anticipation of the coming of fall, our favorite time of year in Colorado. The brevity of fall in the mountains makes this time of year even more special. In such a fleeting fashion, the Aspen leaves produce brilliant colors of yellow and orange and then fall as the cold air settles and the first snow of the season blankets the landscape. In addition to the profound scenic beauty this time of year brings, another perk of the season is the stable weather.  A blue-bird day greeted us as we began the climb up Mt. Flora. It was a nice change of pace from the intense thunderstorms that raged through the mountains on most afternoons during June, July and early August this year that made all day high alpine hikes and climbs impossible. 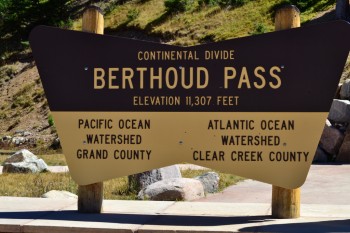 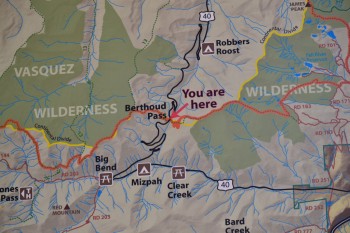 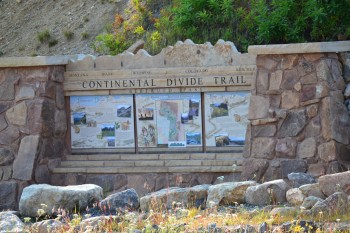 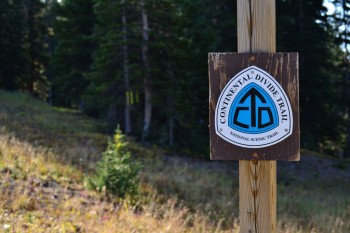 We began the hike around 9:30 am. The temperatures at the pass were in the upper 50s (fahrenheit), and the sky was a perfect blue with not a cloud in sight. For almost a mile we walked up a series of mild switchbacks on the gravel road that leads to Colorado Mines Peak before veering off to the north (left) and connecting with the Continental Divide Trail . There is a clear sign at the junction depicting mile distances to various destinations including Mt. Flora and Breckenridge Peak along the route. The trail begins as a lovely smooth single track dirt path that gently gains elevation. We were immediately greeted with a wide open alpine landscape. The parking lot and cars could now be seen as treeline dissolved.The parking lot already looked far below us as we gained elevation rather quickly on the road portion of the hike. 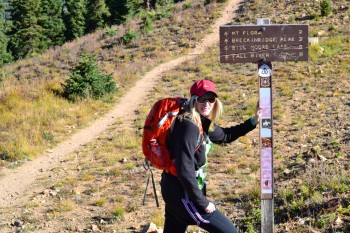 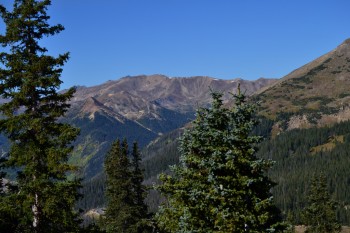 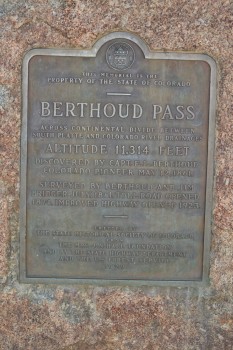 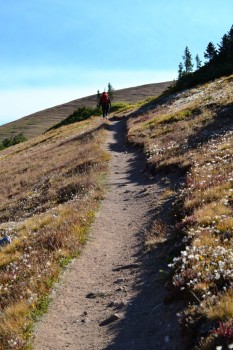 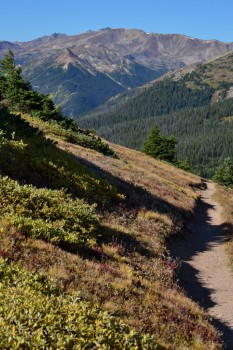 We followed the trail to the Colorado Mines Peak Junction around 12,000 ft and continued along the saddle between this peak and Mt. Flora. The beautiful Blue Lake drainage was visible to our right as was a verdant valley. There is a nice rocky outcrop overlooking the valley to stand on for excellent views and photographs. The airy gusts of wind were intense on this section of the trail, so we tried to keep moving to keep our hats from blowing away.

After our brief reprieve from gaining elevation, we began to climb again. This time we gained about 700 feet of elevation as we reached the top of a false summit. The trail begins to get rockier from this point forward, but we were comfortable in trail runners instead of traditional hiking boots. We started to see a few people coming down the mountain at this point. Prior to this our hike had been in solitude. While this is an extremely popular trail, but most people tend to hike it earlier in the summer. 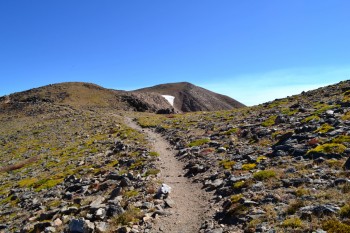 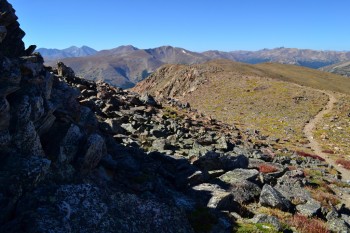 We reached the summit of Mt. Flora after hiking about 3.3 miles. The approach was very easy (compared to recent adventures). The summit is marked by a large cairn and the presence of several wind shelters. It is a very wide summit and difficult to distinguish the point of highest elevation. We did stumble upon a summit marker while on top and made a little rest spot in an unoccupied wind shelter. The views from Mt. Flora are spectacular. We felt like we were on top of the world with 360 degree sweeping views of the rocky mountains. To the northeast we could see turquoise Lake Ethel and as well as Mt. Eva, another 13er in the far distance. 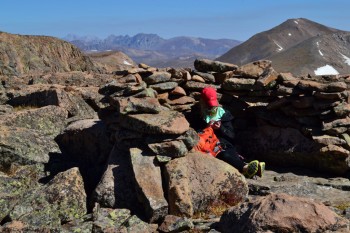 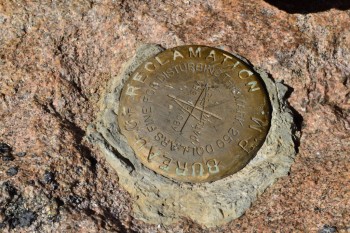 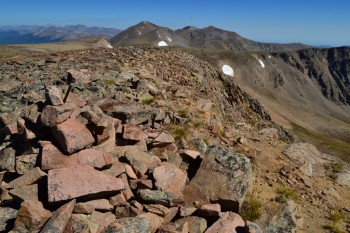 We spent about 30 minutes taking pictures and playing around on the summit before attempting to continue on towards Mt. Eva. The sky was still a perfect clear blue, so we felt pretty comfortable staying above treeline. We proceeded off the summit the way we came and attempted to find the trail again. We managed to find small bits of trail here and there but nothing too defined. We bushwhacked past Mt. Flora about another mile soaking in all the scenery. We could see the town of Winter Park, CO to the west as well as the curvy blacktop hwy 40 weaving in and out of the voluminous mountains. If we kept our sights to the north and east, we were greeted with nothing but a vast expanse of wilderness and peaks. Even James Peak could be seen in the far distance which we have tagged several times. Eventually we came to the point in which we must descend into the saddle to get to Mt. Eva. We had additional plans for the rest of the day and opted to turn back. 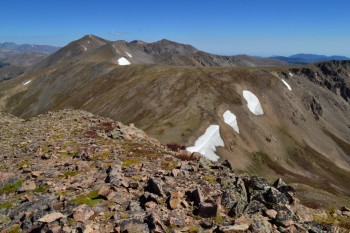 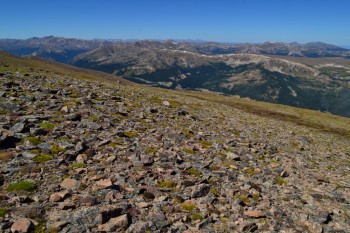 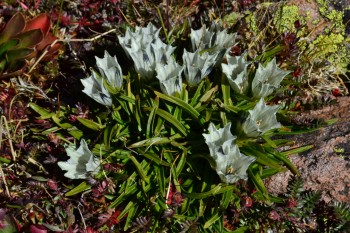 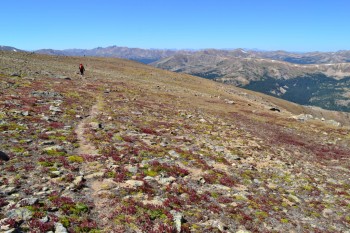 On the way back, we stopped for a break at a wind shelter found off the east side of the trail. We leaned back on our packs and relaxed in the mountain bliss. The mountains have a way of letting the worries and stress of the everyday world dissipate. Even when the trail is tough and our legs and lungs are very tired, there is some relaxation in the fact that we only have one goal for the moment. One step, one breath, and repeat. The focus that comes from climbing and hiking is a form of meditation. 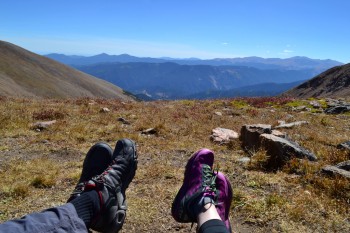 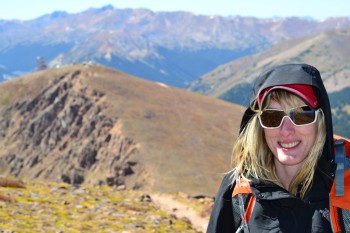 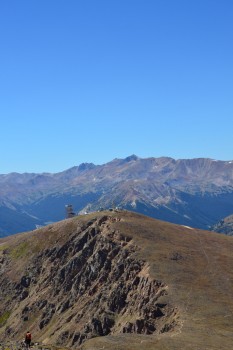 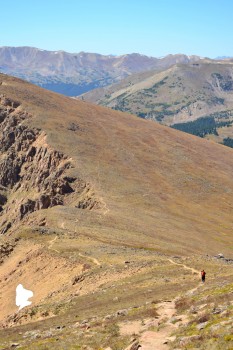 We continued back the way we came and frolicked in the alpine splendor along the way. As we approached the Colorado Peaks Mine Trail Junction we chose to climb a little bit more elevation and tag her summit as well. The trail was well defined and short but very steep. After about 10 minutes of trail hiking, we reconnected with the service road that comes from the Berthoud Pass parking lot. We saw a few Colorado Mines School students hiking to the top. They said they took the service road the whole time. We followed the road to the top of the peak and found all sorts of strange equipment and buildings. While not exactly aesthetically pleasing, the summit was quite interesting. The structures are actually part of an automated weather station to aid in aviation navigation through the critical mountain passes. This link provides more information. Note: Don’t plan on driving up the service road to see the peak. It’s closed in summer and only open for snow mobiles in winter. 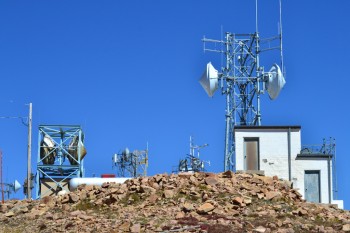 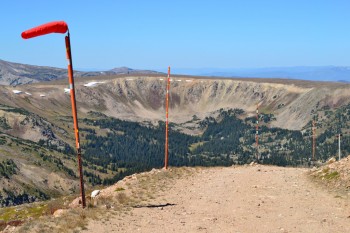 Instead of returning the way we came, we decided to walk back via the service road the rest of the way. We thought this might save time, but the road had several very long switchbacks and actually took quite a while to get back to the car. Nonetheless, there were beautiful trees and flowers along the way. Butterflies were everywhere, floating and fluttering among us and landing on the exquisite flowers. 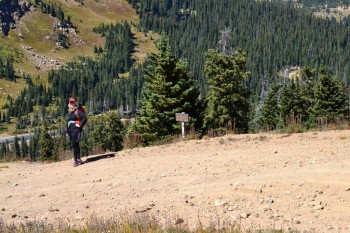 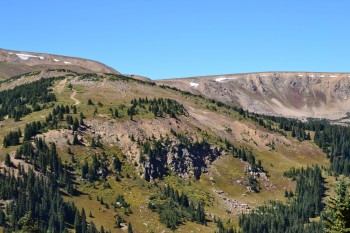 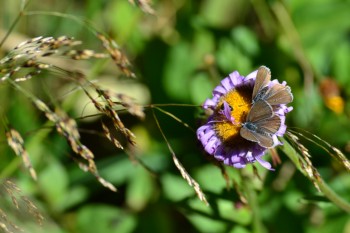 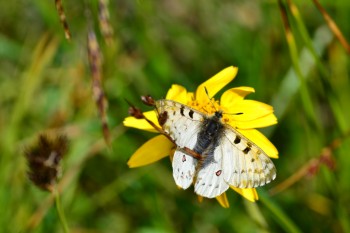 The high alpine experience that a trip on the Continental Divide trail to Mt. Flora is a phenomenal hike that will have you singing Julie Andrews and holding your hands up in joy shortly into the trek. In short, it’s like getting the reward of a 14er for about half the effort. Instead of battling the crowds in late July or early August, give it a go in September when everyone is back in school or worried about the cold. You’ll be glad you did.