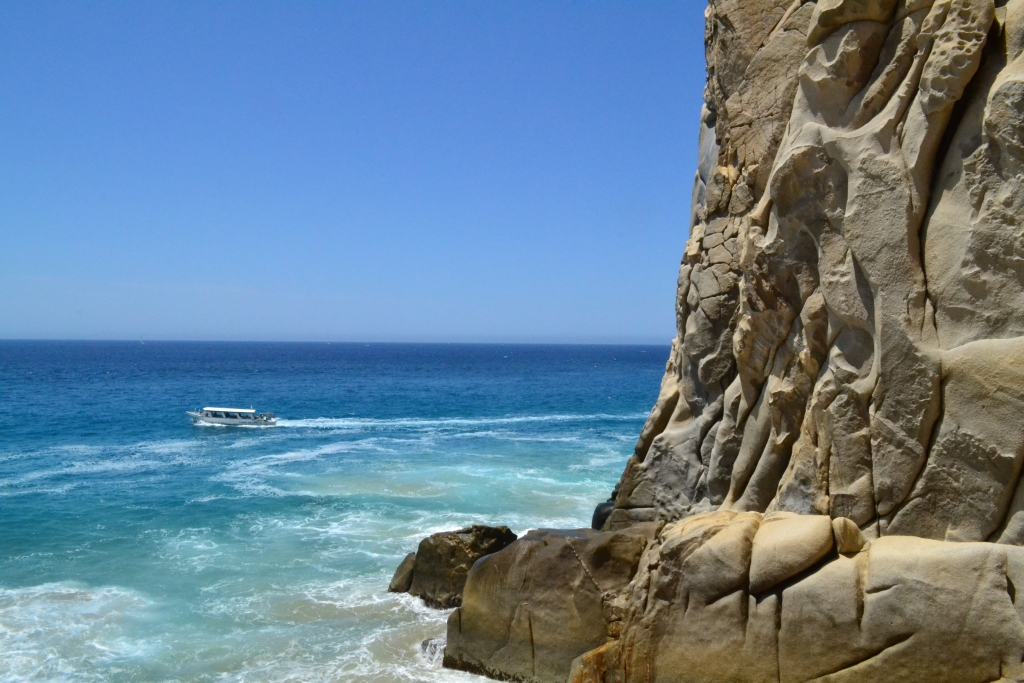 To celebrate our four year anniversary, we decided to head down to the Baja Pennisula in Los Cabos, Mexico. We stayed at the Solmar Resort right on the Pacific side of the ocean. While the rip tides were too strong to go swimming in the Pacific, this didn’t hinder us.  Our location turned out to be absolutely perfect. It enabled us to go on a great hike along the beach and take a class 3 rock scramble to where the Pacific Ocean meets the Sea of Cortez. Seen below is a map of our trek. 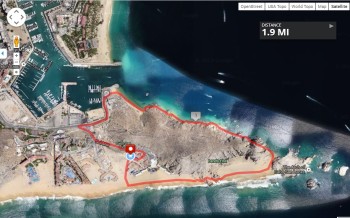 We began our hike right in front of our hotel overlooking the Pacific Ocean. For most of our stay the tide was quite high, and the waves came powerfully crashing into the beach. At one point, someone from the hotel on a four-wheeler warned us we were walking too close. Sneaker waves have been known to get people and suck them out to sea. We continued our hike heading south toward Land’s End, which refers to the rocky formations that comprise the southern most tip of Baja. After about a quarter mile, we reached the magnificent rock structures and our climbing entry point. Seen below are photos leading up to the climb and the Pacific side of Land’s End. 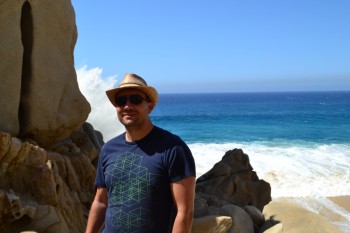 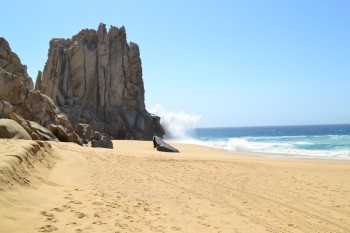 Upon reaching the rocky outcrop, we began our climb up the slick taffy-colored rock. This part is of the hike/climb was, for the most part, not too bad. The only issue was the abundance of sand layered on the rocks from high tide which made traction difficult. Once we reached the top, we began a descent toward our secondary climbing point of entry. Hopping down from boulder to boulder led us to a small beach inlet and Pacific water rushing wildly toward us. In times of low tide, it is actually possible to forgo a secondary climb and simply walk in the sand over to the famous Divorce Beach. When we were there, the safer route was to climb rather than risking the dangerous rushing water. Seen below are photos of this inlet and the beginning of our next ascent. 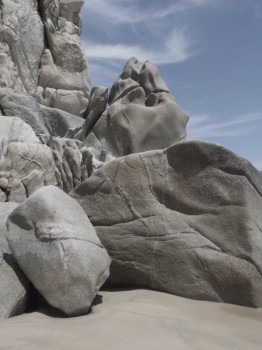 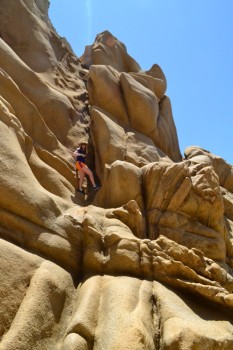 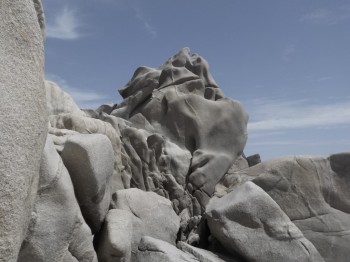 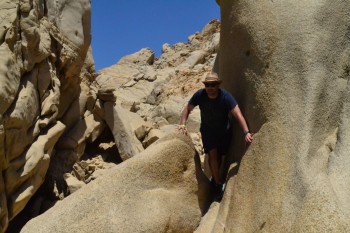 After climbing and bouldering on the descent, we were rewarded with our first views of Divorce Beach. Though spectacular, this beach is still on the Pacific side and off limits to swimming. This is actually why the beach is named Divorce. The locals say, “if you are unhappy with your partner, encourage them to take a swim…problem solved”….Seen below is Divorce Beach. 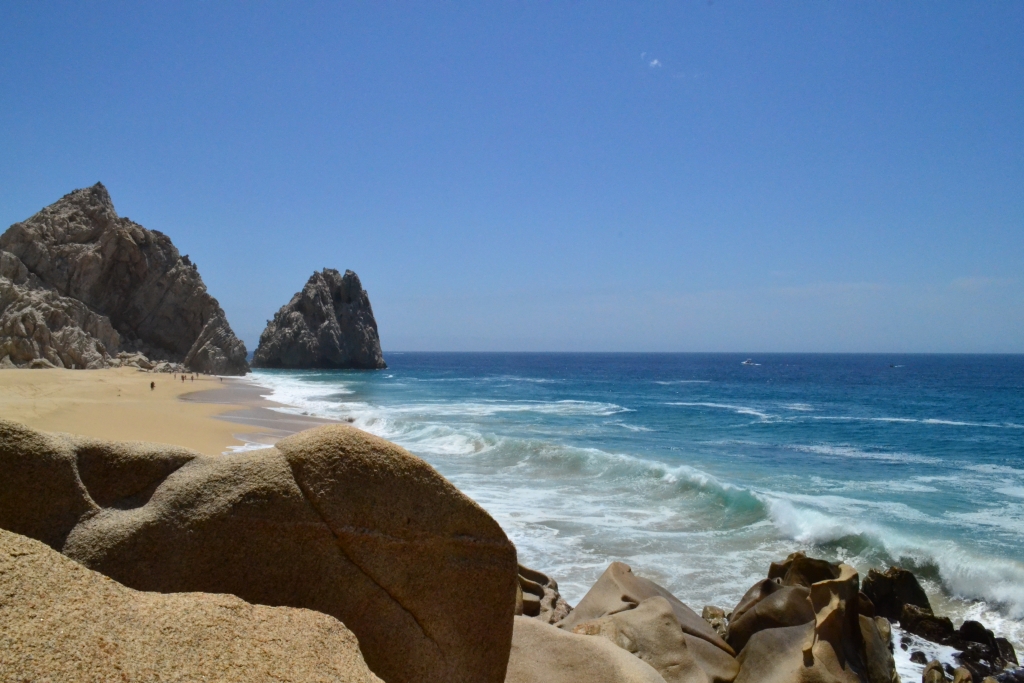 On our second hike here, we made a detour and took a hiking trail that leads up a steep hill that overlooks the marina and town. It was 97 degrees outside with no shade when we made this attempt, so it was a bit challenging due to the extreme UV as well as loose scree. Once we reached the top, we were rewarded with sweeping views of the marina and Sea of Cortez. Seen below are photos leading up the trail and from the top. 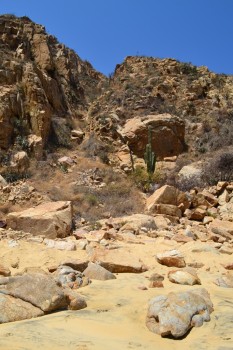 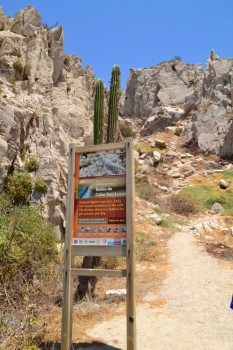 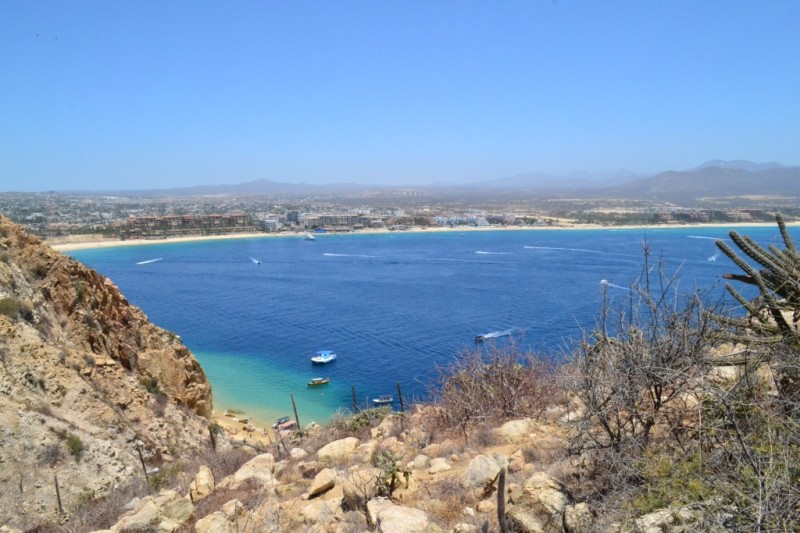 When the heat became too much, we quickly descended and headed toward a shady region in the form of a partial cave. This cool little inlet of granite allowed us another opportunity to play on some rocks while we cooled off a bit in the shadows. The formations are so unique, it is difficult from the photos and angles of the sky to determine which way is up or down. Seen below are photos of our rest break. 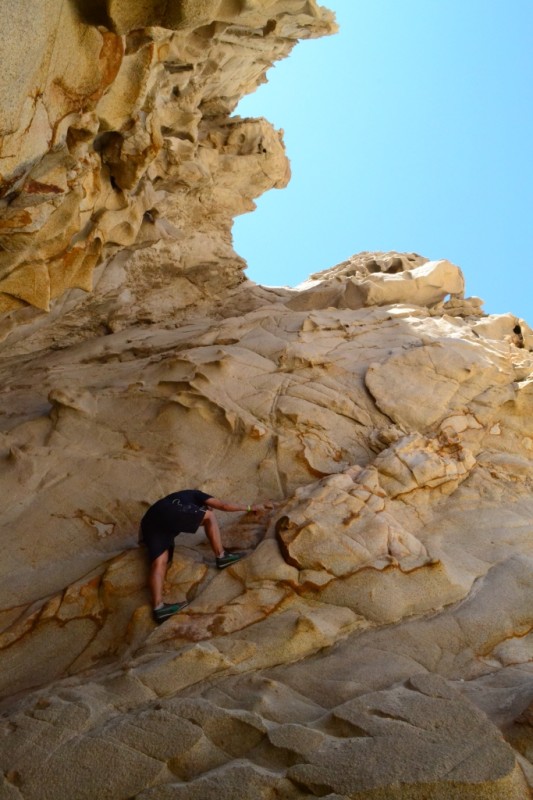 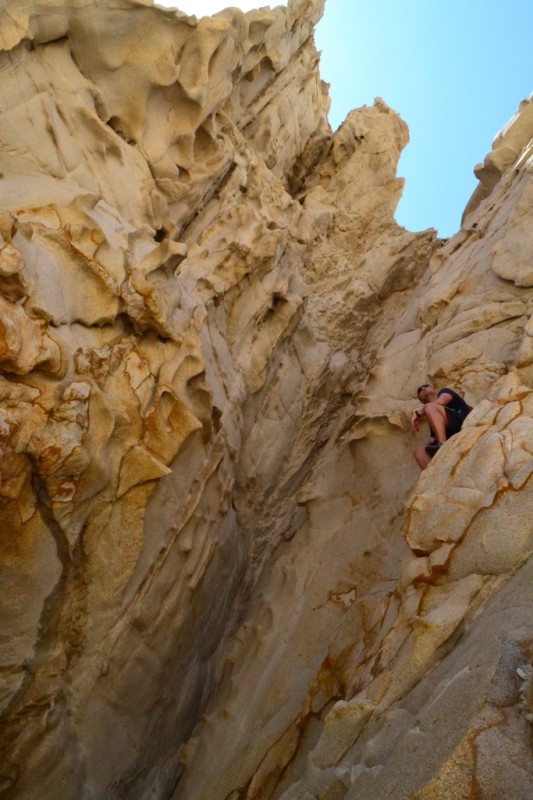 We then proceeded to the famous Lover’s Beach on the Sea of Cortez to finally get to jump in the cool water. There were more people on this side of the beach, as water taxis frequent the area to drop sun bathers and swimmers off for an hour or two. This is, in fact, the more common method to reach Lover’s Beach. Some of the locals seemed shocked that we climbed our way over to bliss. The water was cool and refreshing and crystal clear. We swam toward a large rock that was covered in pelicans. The water was deep here and snorkeling gear would have been perfect. Seen below is a “selfie” of us floating in the sea and Lover’s Beach. 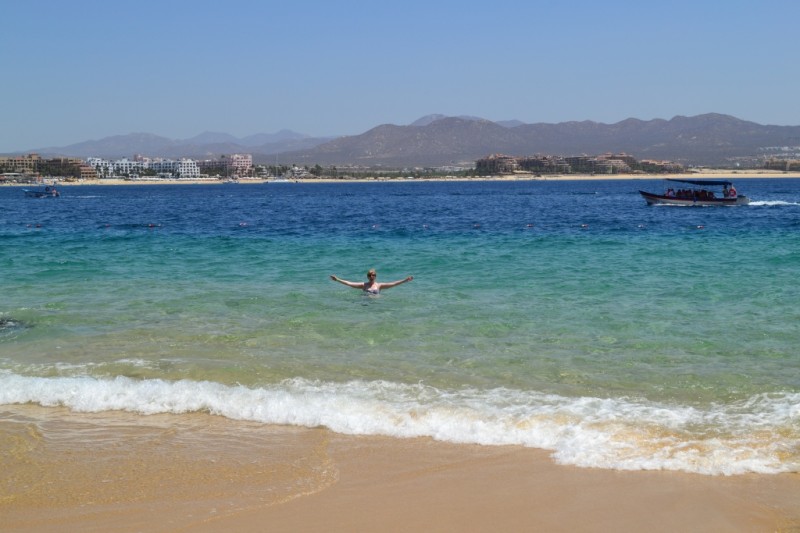 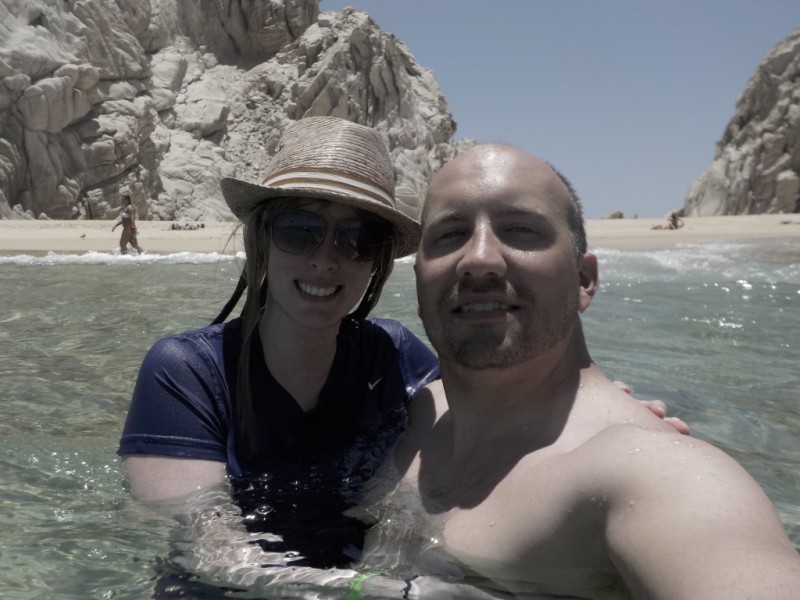 On our first day on this route, we made a loop back toward the hotel by following Lover’s beach and then the rocky coast to Pelican Rock and eventually a local beach which took us to the marina. This route is shown in the map and was about 2 miles long. The second time we did this hike, we made the climb back the way we came to save time. Overall, this was a truly unique beach experience enabling us to explore a desert meets sea landscape unique to the California Baja Peninsula. The abundance of rock randomly situated in areas of long flat beach was intriguing to the eye. Los Cabos was a wonderful trip and allowed us to do our favorite things all in the same day: hike and relax on the beach.