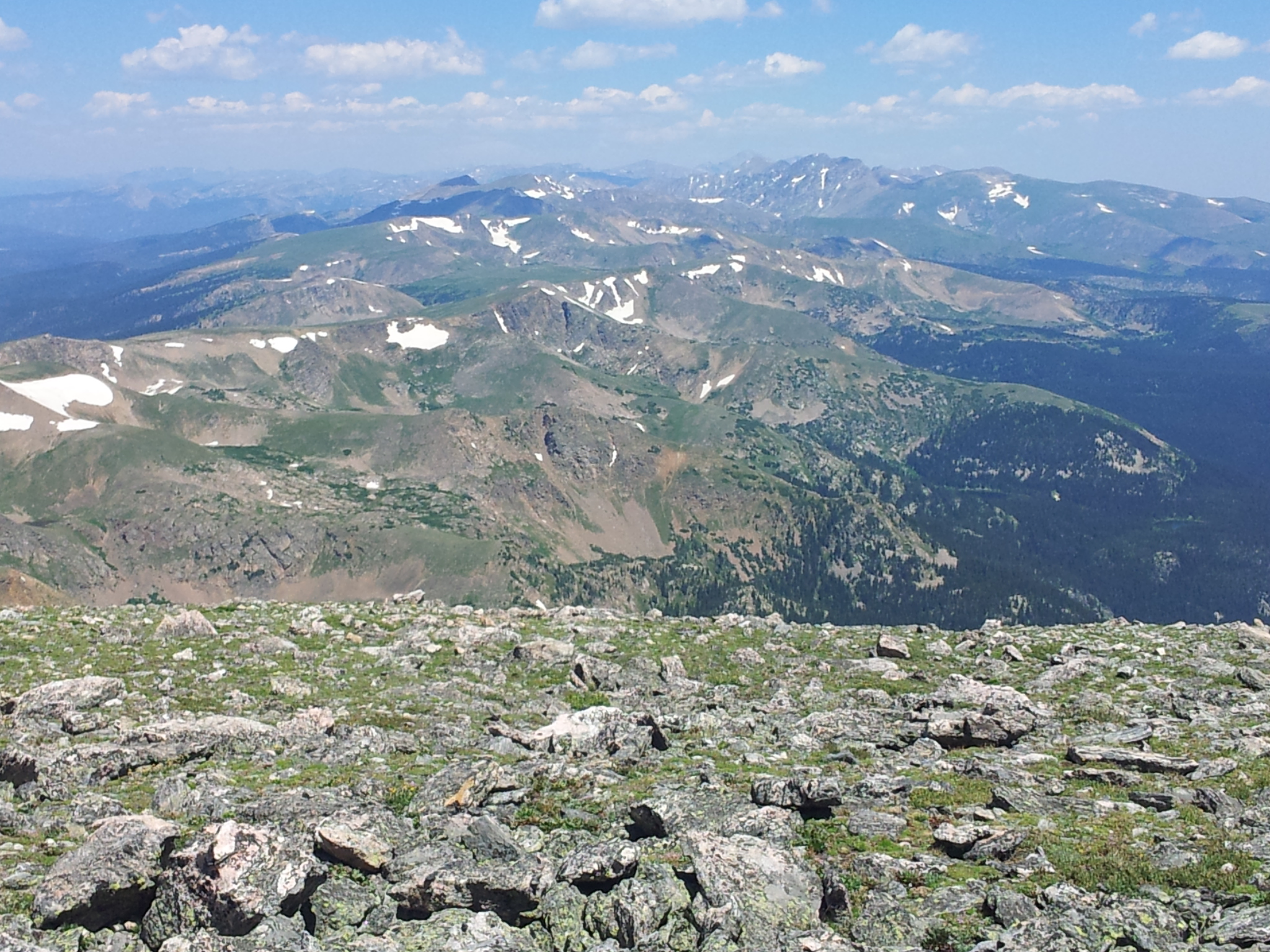 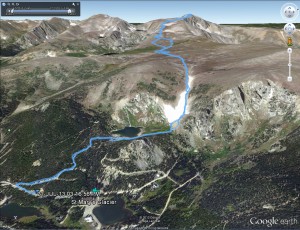 “Every mountain top is within reach if you just keep climbing.” Barry Finlay, “Kilimanjaro and Beyond”

While we visited St. Mary’s Glacier in early Spring, it was surrounded and covered in many feet of  snow and difficult to distinguish. Plus, the harsh weather with bone chilling wind and snow forced a decision against a summit attempt of James Peak. With summer upon us and a bluebird sky and pristine weather report for this Sunday, we awoke early and made for the summit of James Peak.

We arrived relatively early and got a nice parking space (which costs $5 for the day) and then began the hike up to St. Mary’s Lake, which starts at around 10,400 ft. When we were here in April the path up to the lake and glacier was completely covered in snow.  This time the once snow laden trail was replaced with heavy amounts of boulder and debris.  The first three-quarters of a mile of the trail hovers around a 20% grade. We dodged loose rocks and climbed steadily until we reached a plateau at the lake and base of the Glacier.

At the lake, we saw a half dozen or more tents set up and a very different picture than in April.  The lake was a deep and bold blue, and the once bright white slopes above the lake were now emerald. There were no signs of the avalanches on the verdant hillside that greeted us.  We trekked around the lake and on towards the glacier through the lush greenery.  Below is a panorama of St. Mary’s Glacier.

Once we neared the glacier base we could see a small stream flowing from the bottom of the glacier and feeding the lake below.  It was surprising to see some people actually swimming in icy water.  Walking up the steep glacier treats a climber to some of the steepest grades on this hike, which average around 24%.  The glacier meanders up for almost a mile and then disappears, and the incline mellows out. Below are some images of our hike up the glacier. 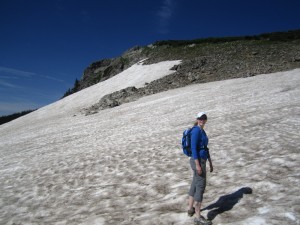 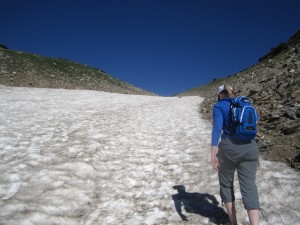 At this point we were solidly in the alpine environment. Once the snow and ice vanished, the wildflowers, butterflies, and critters came out.  This part of the hike is in the James Peak Wilderness which comprises part of the Arapahoe and Roosevelt National Forests.  The trail then slowly climbs up and away from the glacier and forms a small ridge where the Continental Divide first comes into view.  We saw numerous flowers along the path and couldn’t help but stop and take a few pictures. Eventually, we hit an old jeeping trail.  It’s at this point that the trail more or less vanishes, and we had to improvise and look for the cairns which were very useful for this hike.  Pretty quickly we were back on the trail, and we took this panorama below.

Pretty quickly after getting back on the trail we found ourselves looking at the large Lake Lomond as well as three smaller lakes surrounding it: Ohman, Steuart, and Reynold’s Lakes.  Lake Caroline is further behind them but is not visible from the ridge.  Above this set of four alpine lakes is another body of water called Ice Lake.  It was apparent why it received this name, since even during mid-July it was mostly covered in ice.  It was a spectacular view with Mount Bancroft just above these alpine lakes.  Below are some pictures of the lakes as we climbed towards the summit. 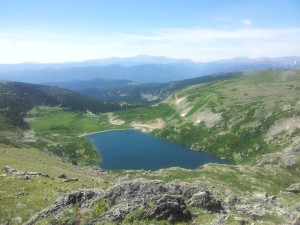 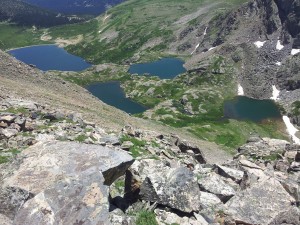 After pausing to take in the breathtaking views of the lakes, we made a hard push for the summit of James Peak.  As with most peaks the actual summit is quite elusive. We would see what we thought was the summit only to realize it was just a ridge as we approached it. The path was littered with dozens of varieties of alpine wildflowers, many of which you can view on our Flowers of our Hikes page.  It was exquisite scenery with prominent views to the south and west of the rocky mountains.

After roughly a mile from our view of the lakes we came to a ridge that overlooked the east face of James Peak.  From this vantage point we could see James Lake and Little Echo Lake 2,000 ft below us.  It was awe inspiring and also slightly scary to look down the cliff face which dropped rapidly from 13,080 ft where we were standing to 11,200 ft where the lakes reside.  Looking north we could see many of the mountains of the front range, and the view seemed quite limitless.  Below is an image of James Peak Lake with Little Echo Lake just behind it; if you look at the bottom center of the image and find the ‘v’ in the ridge you can look almost straight down the mountain.

At this point, looking at James Peak Lake we only had around 210 vertical feet to climb, but it started to feel like hiking for a minute was extremely hard and we wanted to take breaks.  After sitting down for a minute to catch our breath we pushed up to the summit.  It was amazing.  We could see 360 degrees around us for what seemed like endless space.  The mountain ranges in front of us layered together in various shades of blue and purple.  We could see Winter Park and Mary Jane to the north-west, Mount Bancroft was staring right at us from the west, Grays and Torreys to the west behind Bancroft, and Mount Bierstadt and Evans just south-west of them.  It was very peaceful on the top with only about six other hikers up there with us.   Below are some of the pictures from the summit. 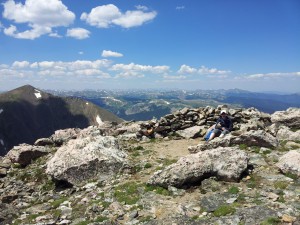 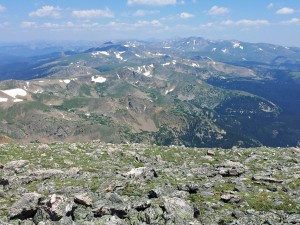 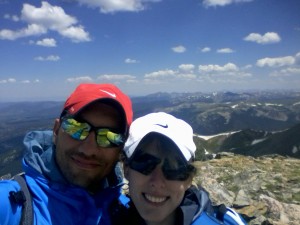 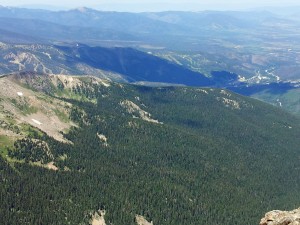 We spent about 30 minutes on the summit and then decided to head back down. Once we started our descent we noticed that there were many other hikers coming up to the summit, so we were glad to have gotten an early start.  Going down was quicker than coming up, but by no means easy.  The steep grades (averaging 17% for the entire hike) were compounded by the loose rock along the path, and we had to be very careful with our footing.

Relatively quickly we found ourselves on the open tundra again, and we made our way back to the jeep trail.  Along the way we found a few small creeks running down the from snow melt on James Peak.  There were some beautiful flowers alongside the creeks, and it was a wonderful sight.  Here are two pictures of one of the creeks. 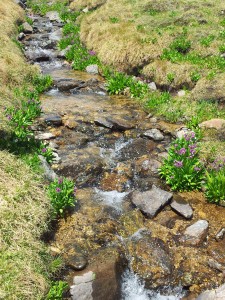 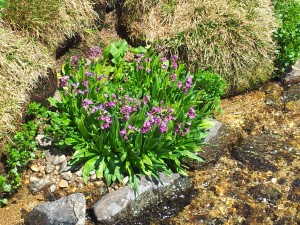 After crossing numerous creeks, we found the jeep trail and even saw some jeeps and four wheelers out exploring.  We made our way back to St. Mary’s Glacier on the path and looked at the beautiful scenery one last time.  Once back to the glacier we realized just how steep it is.  We had to go very slowly to prevent from slipping and sliding down the glacier. (Though we did see some people carrying their sleds, skis and snowboards up…)  Even in mid-summer it would have been helpful to have had micro-cleats.  But despite the slippery and steep nature of the descent we made it down without injury and were back at St. Mary’s Lake.

From the lake it was just a short hike down to the parking lot.  However, it was quite a different scene going down from the lake than it was going up.  There were throngs of people wearing work out clothes, swimsuits, and shorts and t-shirts heading up to the lake for picnics and just to hang out.  We were very glad at this point we had gotten to the parking lot early, since once the lot is full there is no where to park. After navigating our way around the ascending horde we were back at our car and very happy with our accomplishment and experience.  Cheers!