For the 4th of July weekend, we decided to head out with Will and Moses to the Sawatch Range and camp in the San Isabel National Forest with the goal of summiting Huron Peak early in the morning of the 4th. We ventured out of Denver on Sunday morning and had decent luck with traffic on I-70, just the normal 10-15 minute delay near Idaho Springs that plagues just about every trip. Before making our way to our camp site, we stopped in the the historic town of Leadville (slogan Great living at 10,200 feet) to get some firewood and High Mountain Pies (pizza). Leadville is home to many famous and colorful sites including the Tabor Opera House and Grand Hotel, the Silver Dollar Saloon, and many historic homes.

We then drove south on Hwy 24 before turning right onto a dirt road. The journey to the Huron Peak trailhead comes in two segments. The first segment consists of Hwy 390, which is a relatively nice dirt road with manageable potholes and some small bumps. After approximately 11.8 miles, this roads leads you to Winfield — an old mining ghost town — at which point you turn south on 390 and enter the 4WD road segment. Now, this segment isn’t too bad with good conditions and no snow, and we saw some 2WD vehicles make it; however, we are sure that was an exciting ride for them. It was very nice to have the 4WD and high clearance capability. If you don’t feel comfortable taking your vehicle up the 4WD, there is a large 2WD parking area and many lower campsites available. 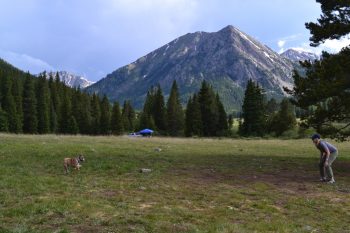 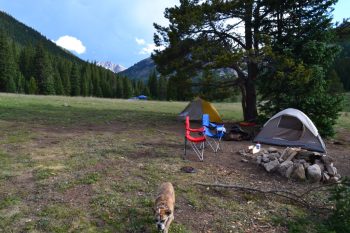 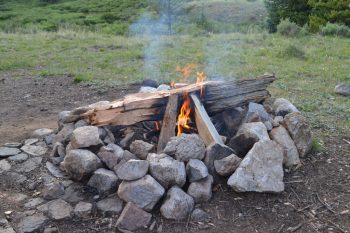 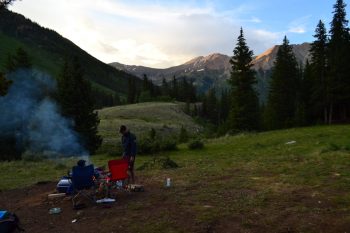 We continued up the 4WD road carefully looking for the perfect campsite. We traveled on the road approximately 1.7 miles  before we spotted the perfect camp site. We found a large field near the South Fork Clear Creek with two nice smooth areas for tents and a fire pit.  Camping is free here, but there are no restrooms and no filtered water. However, there is an abundance of quickly moving water in the nearby creek. The site was spectacular and offered beautiful views of the Sawatch range. It was peaceful. Baby moses enjoyed the freedom to run around the open alpine meadow and soak his feet in the the cool stream. Some pictures from our campsite are seen above.

Even in the summer, the temperatures above 10,000 ft. still plunge in the evening as the warmth from the sun dissipates. The average low in the summer is in the upper 30s, and Sunday night was no different with a low of around 38 degrees. After attempting a decent night’s sleep, we awoke at 4 am to head out to the trailhead. There was still about 0.7 miles of 4WD road to manage in the dark to get to the start, but it was the easiest part of the road. Once there, we strapped on our packs and ventured out into darkness of the woods, our headlamps in place guiding us along. The inky sky reminded us we still had a bit of time before daybreak. Our bodies began to warm up as we gained elevation, but we kept our jackets on as we could still see puffs of our breathe hover in the air as we exhaled.

The trail led us through dense forests, canopied from the sun. Due to the heavy rains earlier in the week, there were several puddles of mud to cross. After about 0.4 miles, we reached a waterfall crossing and carefully maneuvered across. The blackness of the sky began to change to a soft blue gray. Day had arrived when we began the seemingly endless switchbacks to treeline. Seen below are photos from the trail below treeline and our first glimpses of the three apostles (North Apostle, West Apostle, and Ice Mountain) at 11,700 feet. Because the sun was barely up when we ascended this portion of the hike, the photos below show these sections of the trail on our descent. 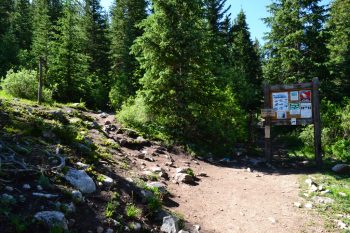 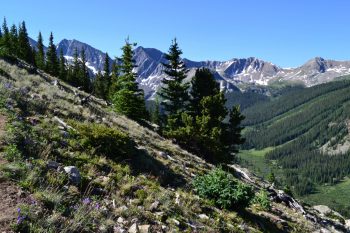 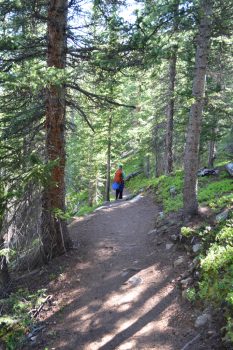 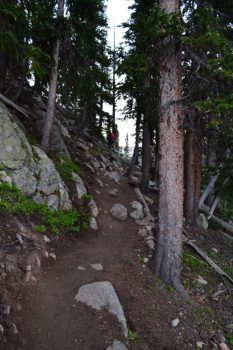 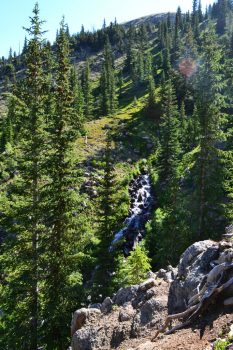 At treeline, the sun was finally upon us, and we began to shed layers. We were now in the beautiful high basin, and the trail eased up on elevation gain for a spell here. We could see Huron Peak to our northwest. We were at approximately 12,300 ft and had quite a bit of elevation gain left to go. So far we had passed one family of three on the way up the mountain and a trail runner who quickly frolicked up the mountain past us. Otherwise we had the trail to ourselves thus far, a benefit to starting a shorter 14er route before 5 am. Seen below are photos of the high basin. 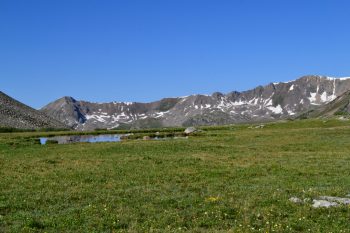 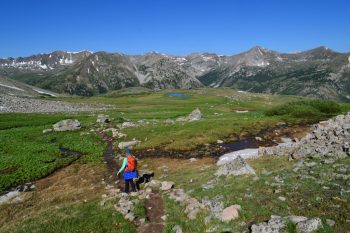 As we left the high basin, we ascended steeply up a series of rock steps and began to gain some serious elevation. Our pace slowed considerably through here, but we kept moving steadily. We continued on the upper slopes to reach the crest of the north ridge. The wildflowers were blooming in abundance, and the grass was a rich green. The views were absolutely spectacular. Seen below are photos of the upper slopes. 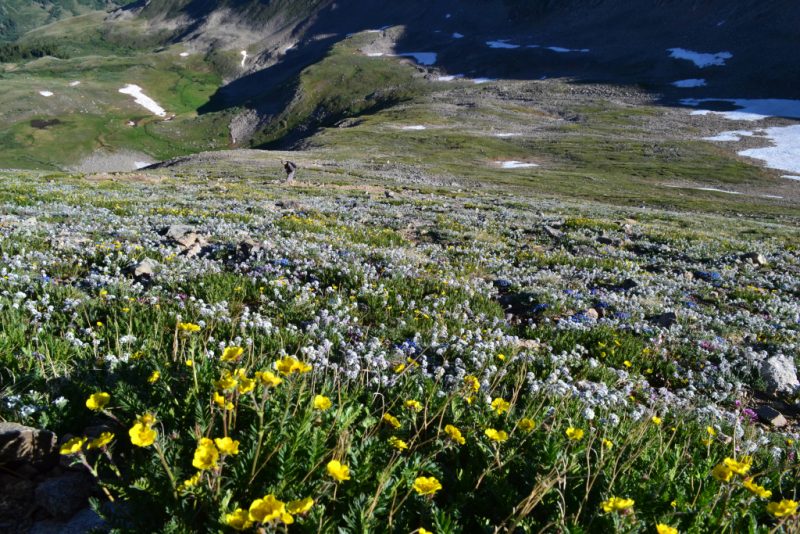 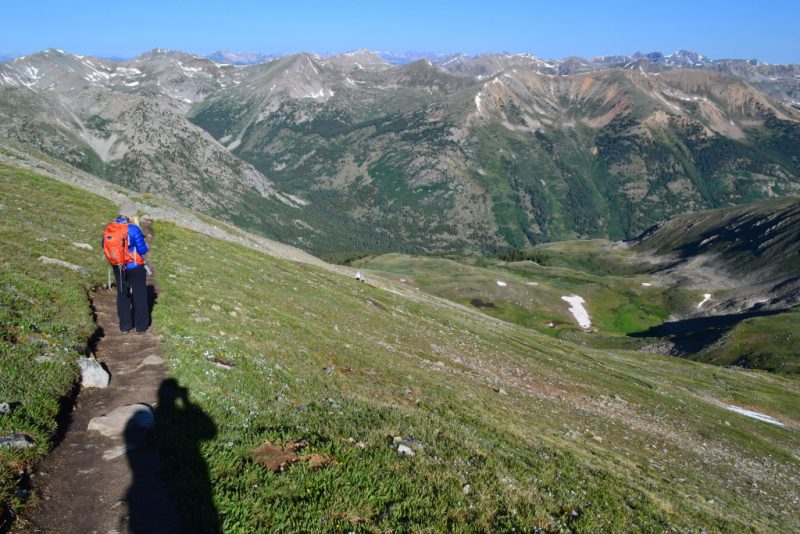 We began to encounter some of the only class 2 sections of the hike and some mild (emphasis mild) exposure. There are multiple segments of trails that all lead upward through here. We each picked a path and headed upward.  We reached the final rocky pitch around 13,800 feet and saw a clear path to the summit. No one was in sight. It looked like we were once again going to have the summit to ourselves. Seen below are photos of the last portion to the summit of Huron Peak. 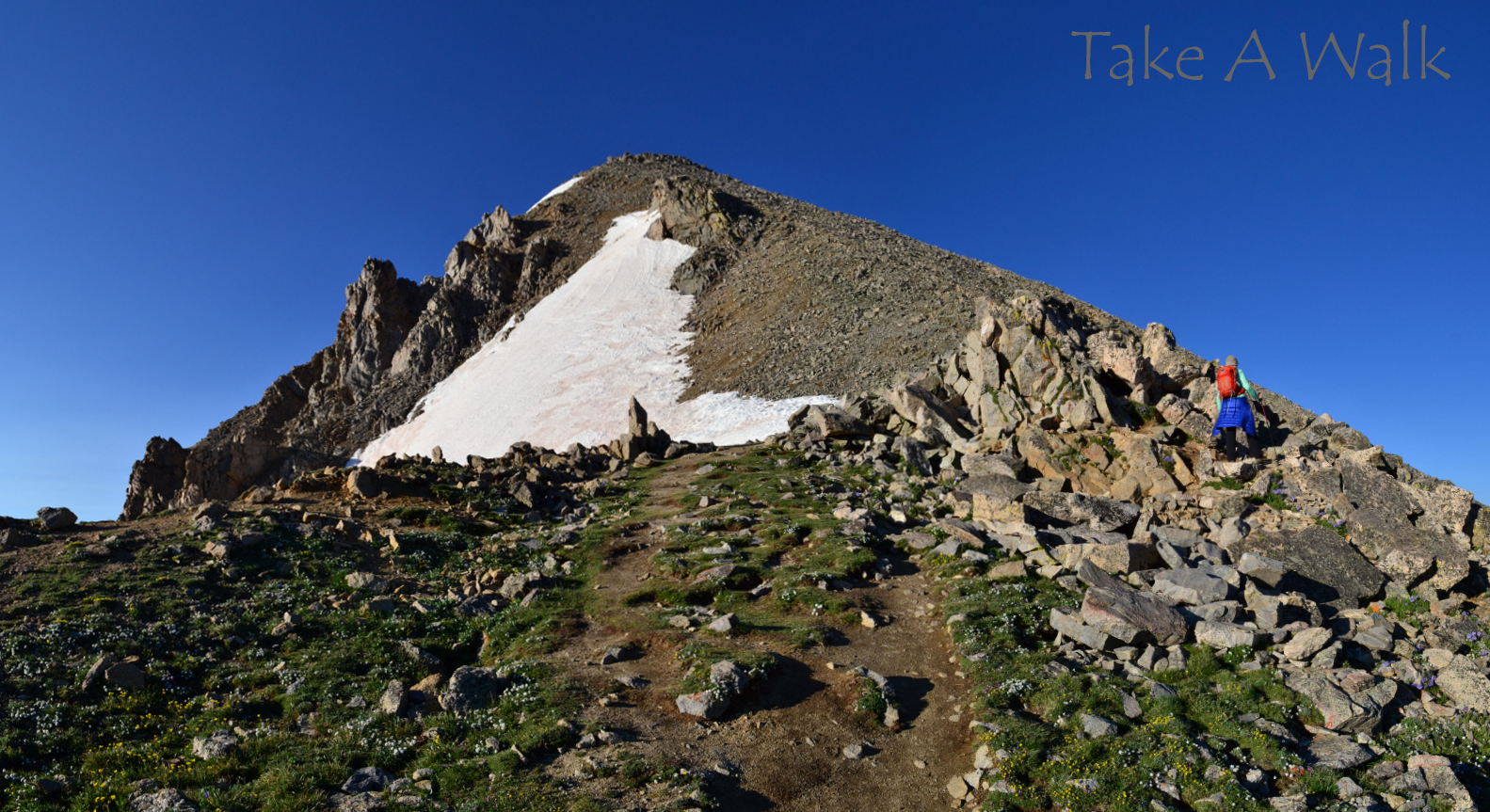 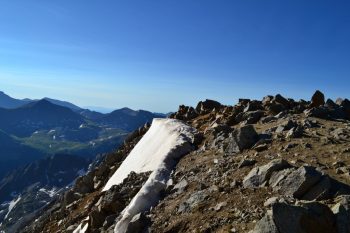 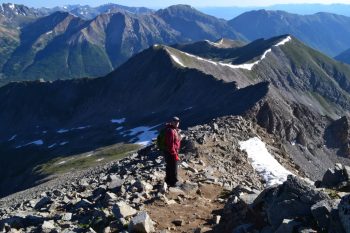 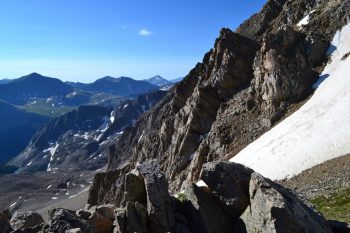 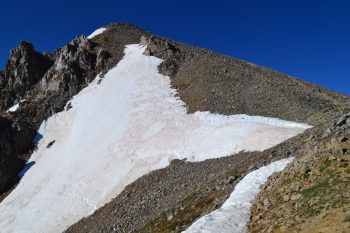 The final pitch was quite fun, and before we knew it we were standing atop Huron Peak before 8:00 in the morning. The views from Huron are some of the most magnificent we have experienced. We ranked this summit in the top three of all the 14ers we have done (we are at number 16 right now). Views from Mount of the Holy Cross and Humboldt Peak were quite amazing. Much to our delight, we saw a unique low-lying cloud formation while we were on the summit. The cloud snaked through the valley below us and reminded us very much of the “Maloja Snake” formation that was featured in the 2014 movie “Clouds of Sils Maria”. The snake “slithers” its way through the  Engadin valley in the Swiss Alps on cold mornings. We stayed on the virtually windless, calm summit for about 20 minutes before heading back down to greet Will and Moses at camp. Seen below are photos of our “snake” and time spent on this impressive summit. 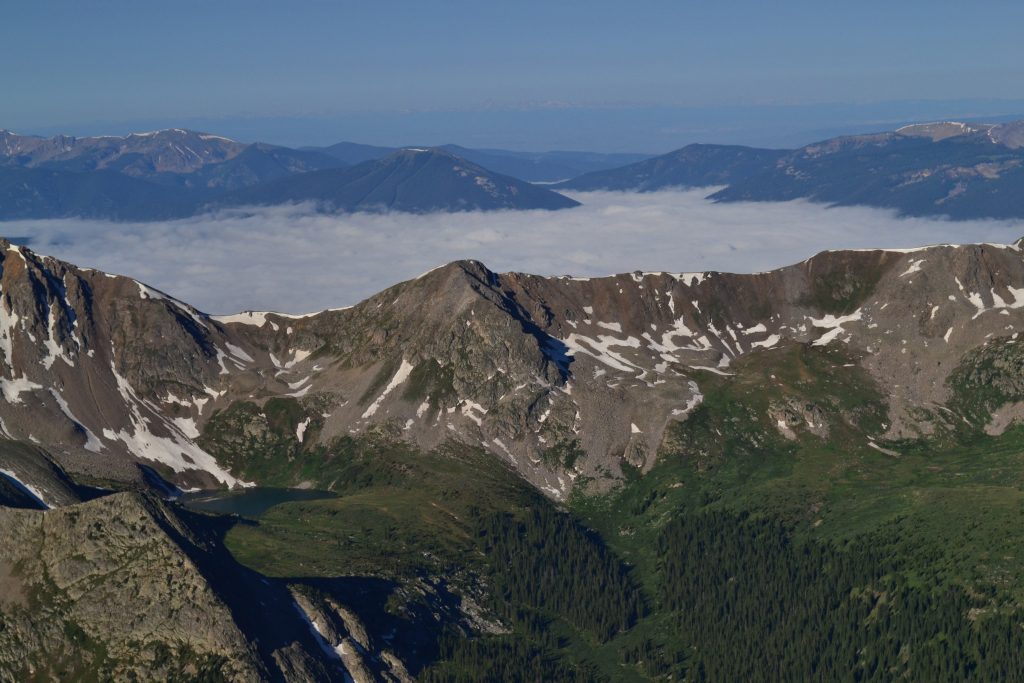 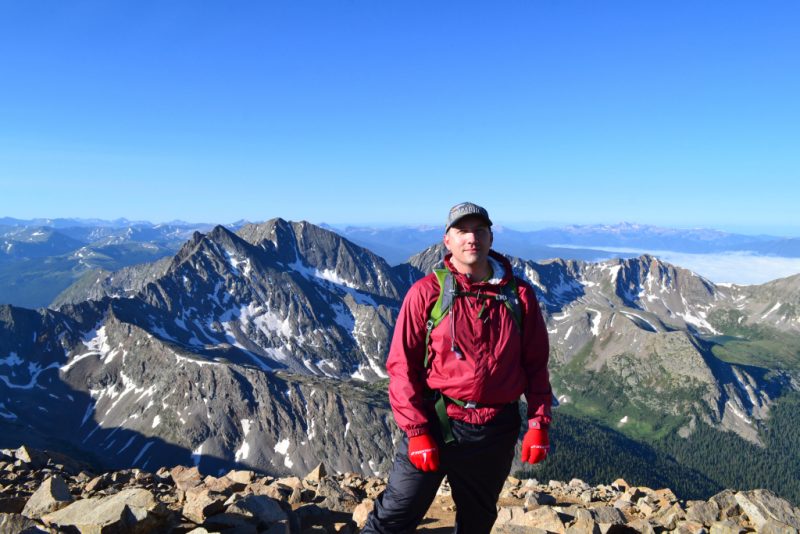 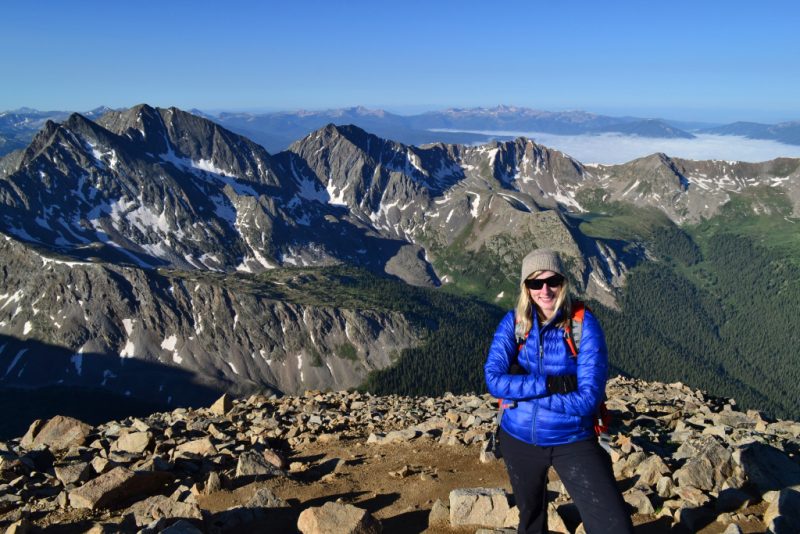 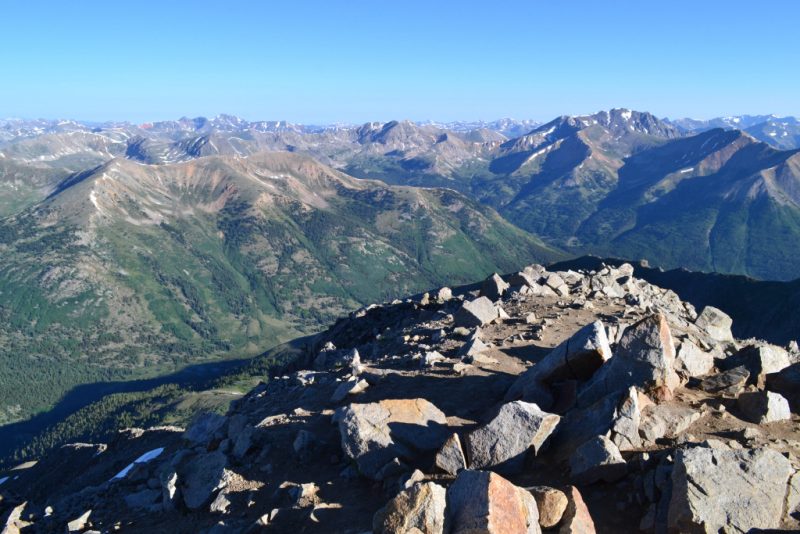 As we returned back to camp, we began to encounter many more people on their way to the top. We estimated we saw about 25-30 people heading up, and were very thankful we started early to enjoy the quiet and solitude of this beautiful peak. We took a little more time on the descent to enjoy the brilliant display of wildflowers that covered the upper basin. Seen below are photos of the hundreds of alpine flowers we encountered. Though their season is short-lived in the harsh alpine environment, they make up for it in immense beauty and color. 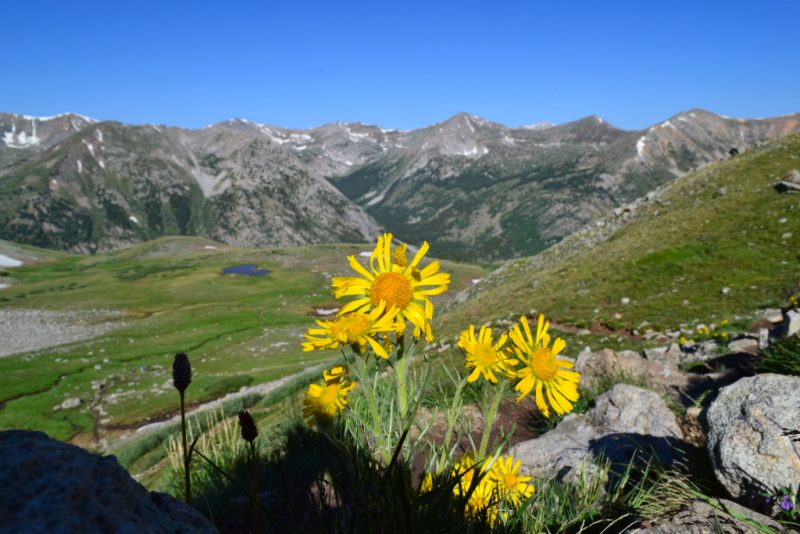 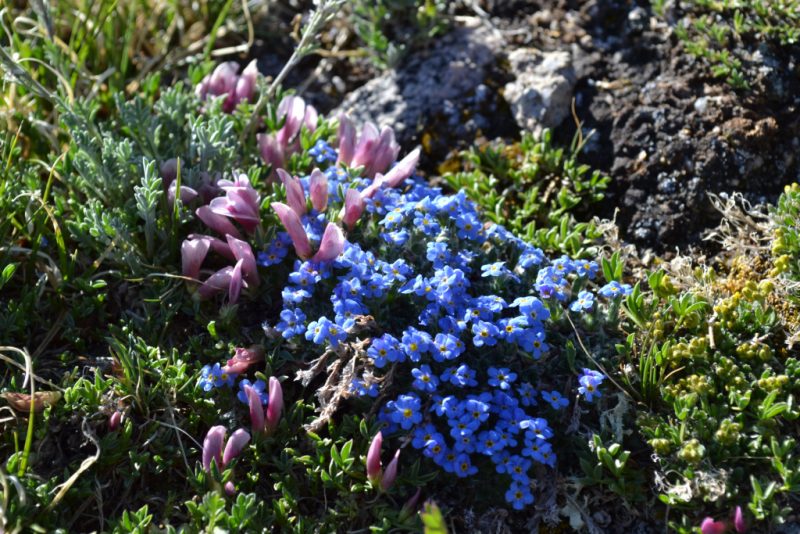 The temperatures had warmed up considerably for our descent, and we once again removed layers. We told Will we would be back at camp by 10:00 am, so after the basin we began to hustle. Excellent time was made through the forest, though the switchbacks on the way down seemed even longer. It was interesting to see our route from the early morning darkness now in full display amid the daylight. It was almost as if we were hiking fresh terrain. We reached the trailhead at approximately 9:50 am, and made it back to camp in the X-terra at exactly 10. Moses and Will were relaxing by the fire. We had a great Independence day, celebrating the best way we know how….hiking and camping in America’s great wilderness. We stayed in camp a little while longer to relax and then headed back to Leadville for cheeseburgers. The drive back to Denver on the evening of the 4th was completely free of traffic, and we made it home in time to enjoy watermelon and relax. Enjoy the gallery below of additional photos from the route as well as our camping spot.