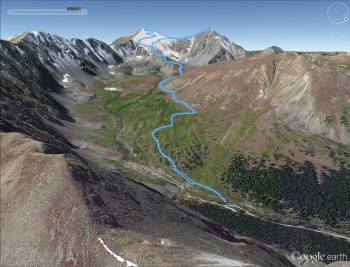 A couple of factors made us get into the X-terra at midnight, drive out to the Grays-Torreys trail-head, and start hiking to the summits at 2 in the morning.  For one thing, Grays and Torreys are argued to be the most popular climbs in Colorado.  They are easy to access from the major metro areas of Colorado (Denver, Boulder, and Colorado Springs) and are just off I-70.  They are also relatively easy climbs and afford amazing views.  Because of this there can be throngs of people in a veritable conga line all the way up.  So there was that.

We also wanted to watch the sunrise at least once from a 14er. So why not from the top of Grays?  The added bonus of missing the crowds just made it that much sweeter.  And so there we were at 2 am with headlamps and bleary eyes staring off into the darkness.  We started officially at 2:15 am.

Even though it’s summer here it can still be chilly in the mountains, and since the trail-head starts at around 11,225 ft. we were wearing a few layers, and our breath was clearly visible in the light of our lamps.  Beginning the hike we just set our lamps to low red light and admired the stars, beauty, and stillness of the night. We made quick work of the willows and even quicker work of the open area in the basin before the real climbing began.  Below are some pictures from our night hiking. 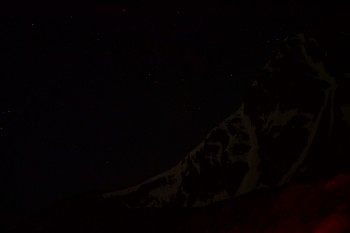 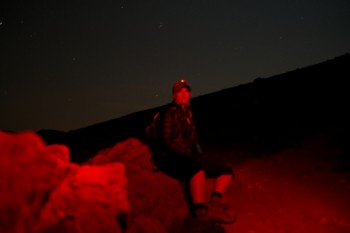 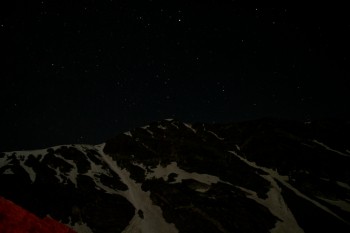 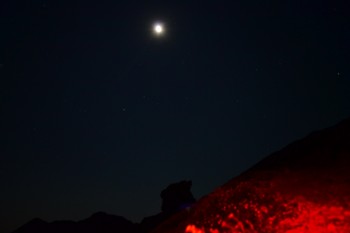 When we arrived on Grays’ summit it was roughly 5:10 am.  There was a faint glow of light to the east as the sun hinted that it was ready to rise.  We cuddled on the peak for warmth and to hide from the wind as we waited for Sol to make his appearance.  Sadly, it was a little chilly and we decided we’d seen enough of the sunrise for now — we needed to move.  We began the 600 foot down climb into the saddle and towards Torreys.  Below are a few images from the predawn Grays summit. 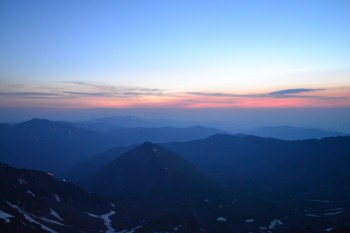 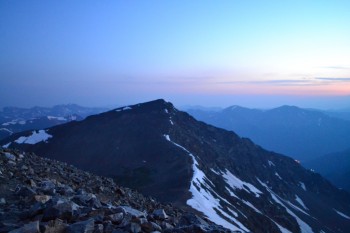 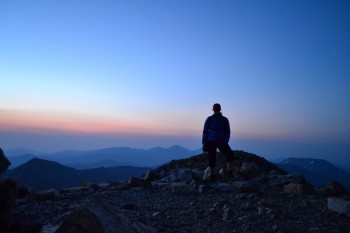 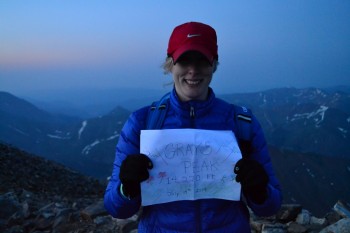 As we headed down the saddle between Grays and Torreys we excitedly remembered throwing some hand warmers in the packs. The wind wasn’t horrible, but it was enough when combined with the temps in the mid-30s, to chill our fingers even with light gloves.  Towards the trough of the saddle we looked to our right and saw the sun for the first time.  It looked like a ball of fire glowing in the dawn.  Here are a couple images of that scene. 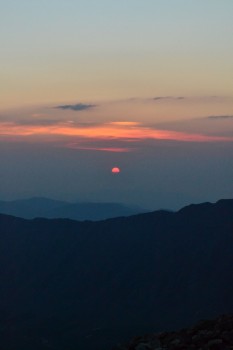 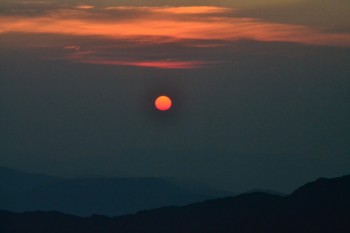 As we crossed the saddle the light was amazing.  The pink glow from the sunrise reflected off the snow, the rock, and even the plants to make all of nature appear at once similar and different than we’d ever seen it before.  We stopped frequently on our way up Torreys to admire the beauty all around us.  Below are a few pictures from that hike up Torreys. 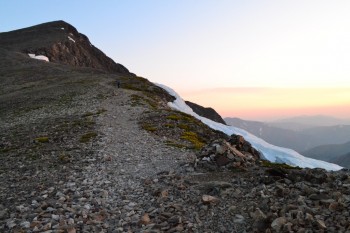 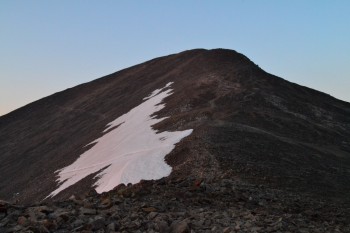 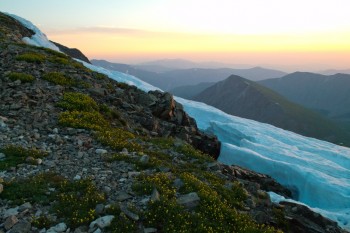 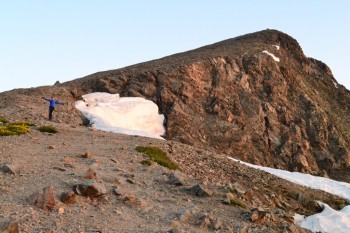 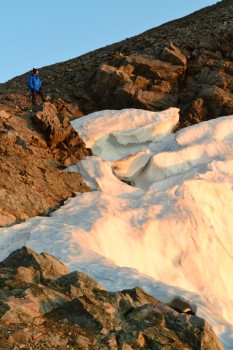 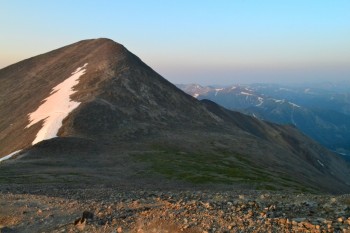 And there we stood on the summit of Torreys. We had officially completed our first double summit.  It was very different from the Grays summit as it was much smaller.  When on Grays gazing north, Torreys blocks some of the view of the Front Range, but on Torreys there is nothing north to block the view.  It was quite amazing, and we were alone and had the summit to ourselves.  Well, almost to ourselves.  As we ate our peanut butter and jelly sandwiches a small ground squirrel kept running out at us and squeaking.  We interpreted this squeaking as, “Give me food.”  We replied that we were sorry, but it is illegal to feed wild animals.  He or she was very disappointed. 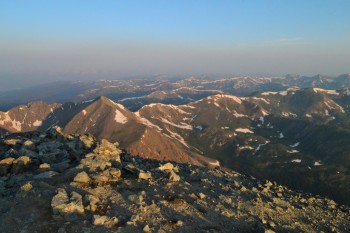 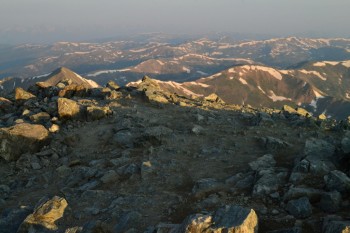 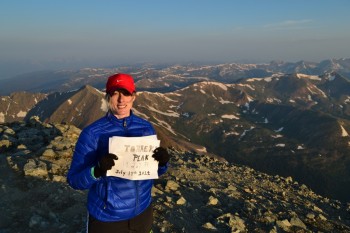 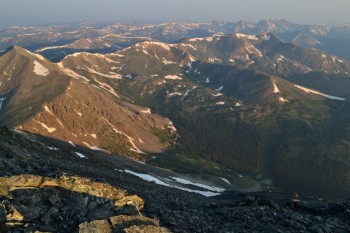 Below are images of Kelso Ridge.  The White Wall and Knife Edge are easily visible. 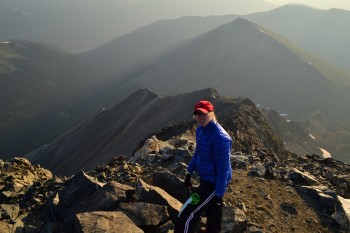 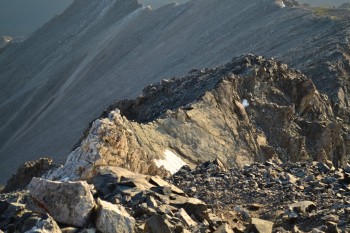 After hanging out on Torreys for about 30 minutes we decided to start climbing back down towards the car.  The route to get back down cuts from the middle of the saddle back across the northeast face of Grays and meets back up with the main trail.  There is a patch of snow and ice on the traverse, but it is very doable in hiking boots or even good grippy trail running shoes.  Below is a picture of the traverse and an image (taken from Torreys) showing the main trail up to Grays (green), the traverse across from the saddle (red), and the route across the saddle (blue). 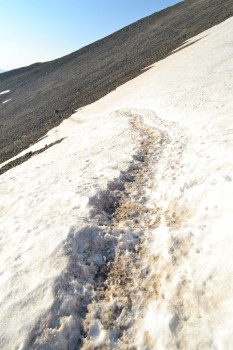 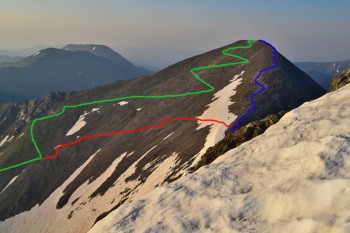 Once across and back on the main trail we noticed that there were quite a few climbers coming up.  In fact, we played a game on who could guess the number of climbers we’d pass on the way down.  Allyson won with a guess of 800.  We counted 710 climbers on the way down, and we started counting pretty late!  That must have been a busy summit later in the day.  It was crazy to think we were the only ones up there and by the time we came down there were over 700 people vying for space up there.

As we continued to go down we noticed something that was impossible to see in the dark of night, flowers!  They were everywhere.  The heavy rains we have been getting has made this a great year for wild flowers and the basin of Grays and Torreys is no exception.  Pretty much every type of flower we have ever seen in Colorado and beyond was represented.  It was quite lovely.  Below are a few images of flowers for your viewing pleasure. 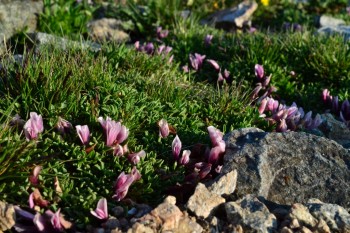 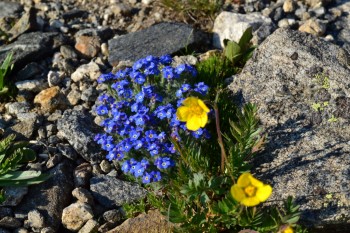 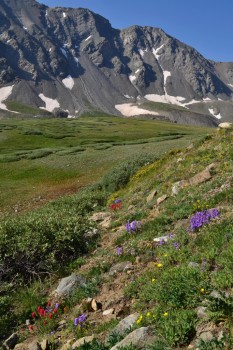 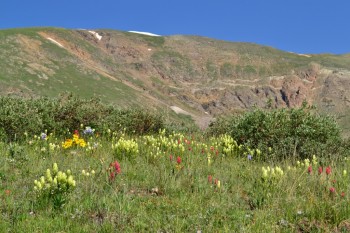 And after dodging 710+ people climbing up, as we tried to climb down, we were finally back at the parking lot.  It was a beautiful day and still morning!  We planned on heading back towards Denver and stopping to get breakfast.  All in all a great start to the day.  And even if we were pretty tired, it was well worth it!

Just a couple notes on this hike.

First, actually getting to the Grays trail-head isn’t as easy as some people make it sound.  We climbed Grays last year and the dirt road up to the trail-head was rough at one point, but this year after all the rain it is pretty gnarly.  The X-terra was definitely using that 4-wheel drive and the clearance was just barely enough to get over some of those ruts.  Coming down later we saw a Subaru stuck and trying to reverse out of this rough area.  If you plan to drive up make sure you have a good vehicle with 4-wheel drive and decent clearance.

Second, many people seem nervous about where the trail splits, one path going to Torreys the other to Grays.  This occurs once you are well into the hike and there is a post in the ground saying “Stay on the Trail.”  But if you look at the post a little closer there is a note written in permanent marker that says “Grays” with an arrow pointing to the left.  This is where you want to turn left unless you want to go to Torreys first.