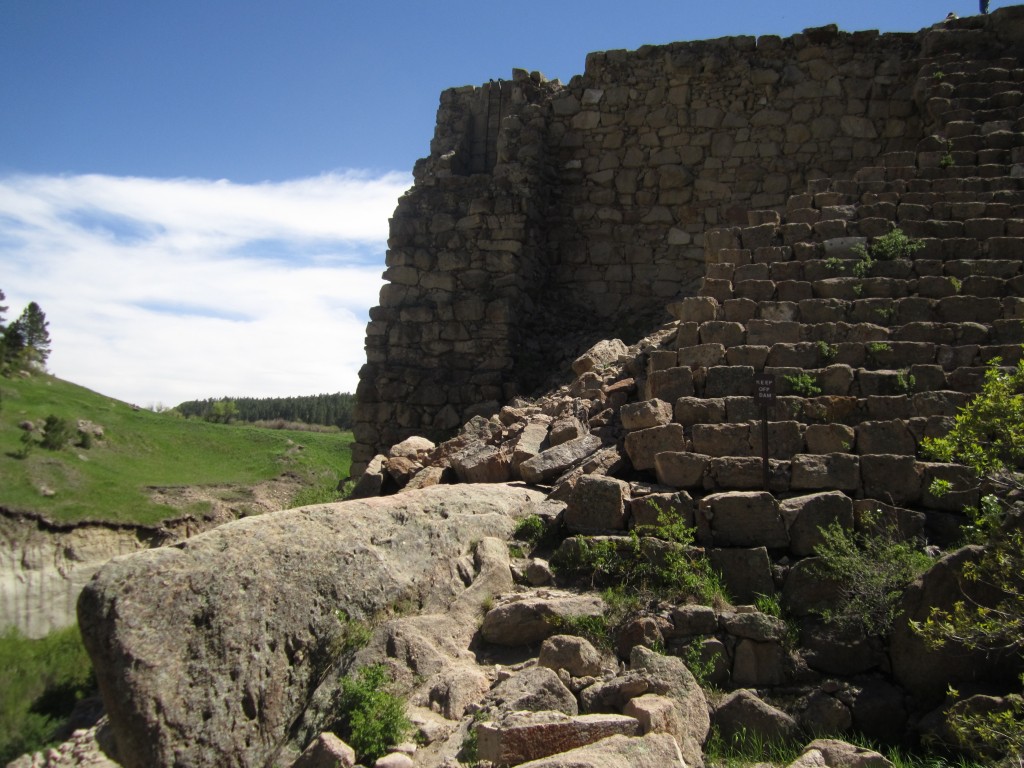 During the late 1800s, as the city of Denver began to grow rapidly, farms and orchards near Franktown helped to supply the city’s growing demand for food. However, due to the lack of precipitation (17-20 inches per year) a narrow dam was built  in Castlewood Canyon just below Lake Gulch and Cherry Creek to provide a constant source of irrigation water. In addition to providing a valuable source of water, the area became refuge for the Denver city dwellers who frequented the area for hiking and camping along its shores as well as canoeing its waters. Many fond memories were made in those years up until the summer of 1933 when the dam came crashing down. Torrential downpours of rain flooded the area upstream of the dam for 4 longs days, bringing one of the worst floods the Denver area had ever seen. Billions of water were released, flooding the lowland plains sending over 5000 people fleeing. A compilation of eye witness accounts published by the Castlewood Canyon State Park describes the night as terrifying as homes, porches, and model T’s were uprooted. Some people had to hang on to telephone poles to survive.

Today, the area is still quite beautiful with majestic views of Pikes Peak and surrounding meadows to be witnessed from the eastern cliffs hanging over the depths of the canyon as we discovered with our trek this time.  We began the day by entering the Castlewood Canyon State Park, which is about 50 min. southeast of Denver. We parked at the Canyon Point parking lot and started our hike on the Lake Gulch Trailhead. This portion of the hike we would consider easy to moderate. It slowly winds downward into Cherry Creek covering about 0.8 miles. Along this portion of the hike, you can witness beautiful mountain views from Pikes Peak Amphitheater as well as the lush plains and grasses some of which are pictured below. 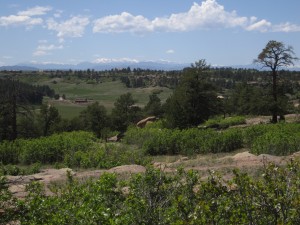 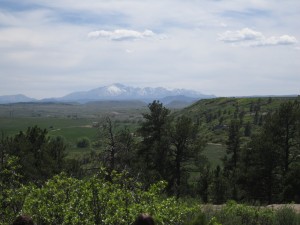 Lake Gulch Trail ends after crossing Cherry Creek via  jumping over several large sandstone boulders. At this point, the trail junctions giving the option of a short loop around Inner Canyon Trail, a trek of the canyon cliffs via Rim Rock Trail or an up-close view of the dam ruins. We opted to continue onto the 0.33 mile Dam Trail to take in the very scenic ruins of this great catastrophe. What is left of the dam can be seen pictured below. In the top right picture you can make out the remains of a ladder running up from a large pipe at the base of the dam.  The Dam trail winds upward to the top of the dam ruins before sharply descending down into the canyon. 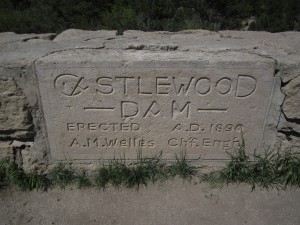 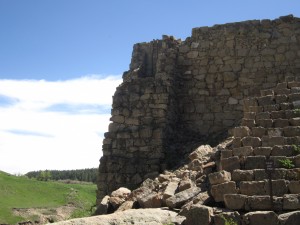 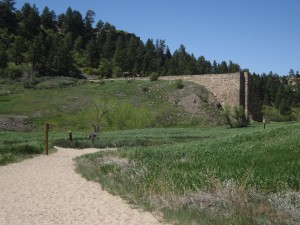 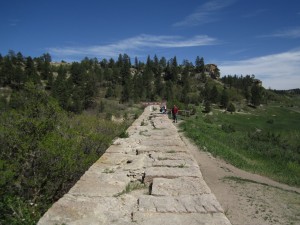 After exploring the dam area we began hiking the Creek Bottom trail which is about 1.7 mi. long.  It is quite beautiful and has a dizzying variety of flora and fauna as well as many geological interests. Along this trail you can see the Castlerock conglomerate, which is a type of rock which is made up of many different types of rock, and also ashy alluvial deposits from ancient volcanoes.  Many flowers were about including blue penstemons, purple loco plants, red paintbrush flowers, yellow alpine sunflowers, blue columbines, and some other unique flowers we had never seen before.  We also ran into numerous species of trees including a glorious grove of aspen pictured below.  Massive Rocky Mountain Junipers with their blue berries and Ponderosa pines gave us some shade and pine cones were scattered here and there as raptors and other birds flew overhead.

As we followed Cherry Creek we eventually hit the waterfalls.  They were gorgeous, but we encountered one of the few dislikes of the trip here.  Due to the fact that the west entrance of the park allows easy access to the falls area there were groups who were smoking cigarettes as they relaxed by the water.  Smoking is prohibited in the park due to the risk of wildfire, but more than that it just made the experience here less than awe inspiring and we left without investigating the area.  Pictured below is one of the falls where a couple was swimming, on the right Thomas standing in front of what used to be a massive ancient river, and below those is the aspen grove on the left and a sand Lilly on the right. 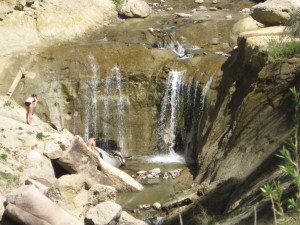 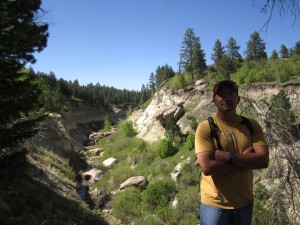 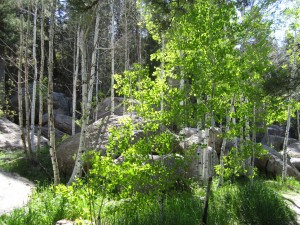 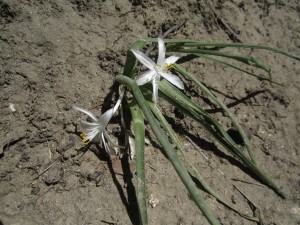 We found ourselves at the end of the Creek Bottom trail and decided to keep going onto the Rimrock Trail which is 2.14 mi. and rated as moderate to difficult by the park and intermediate by us due to the steep ascent to the ridge. We ascended to the ridge on the north side of the park and made our way back towards the dam.  The trail treated us to plentiful views of the idyllic farms below, Pikes Peak, and the remains of Castlewood Dam off in the distance.  We also ran into many prickly pear cacti, some of which were about to be in bloom.  Below are some pictures from the Rimrock trail, including a view of the Castlewood Dam from the ridge on the bottom right. 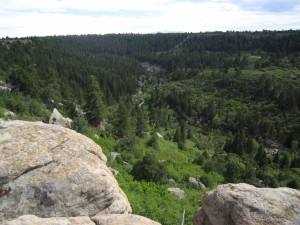 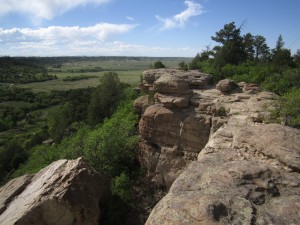 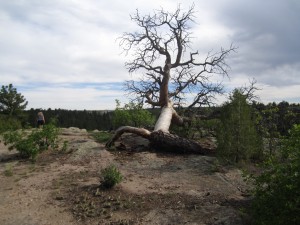 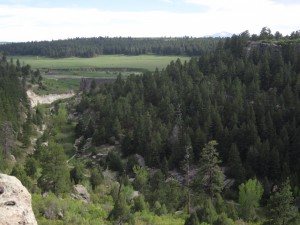 Descending from Rimrock trail is a series of steep switchbacks that lead back to the Dam trail.  It was an awe inspiring sight coming down with Pikes Peak in the background, the ruins of the dam in front of us, and flowers in bloom alongside our path.  Once down we made our way back along Dam trail to the Lake Gulch trail and back to the trailhead. The pictures below are of the south descent we made from Rimrock trail. 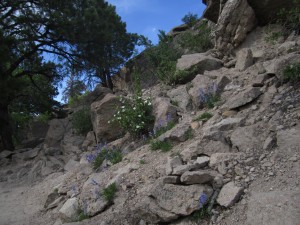 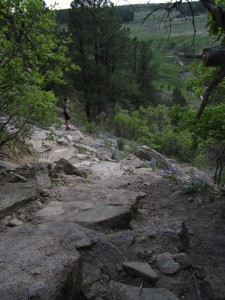 Once back our hike was roughly 6.14 miles long and lasted about 3.5 hours.  The elevation of the park ranges from 6,200 ft. on the Creek Bottom trail to 6,600 ft. on the Rimrock trail.  Some special considerations to make are to bring plenty of water, since there aren’t any good rest stops along the way, watch for rattlesnakes as they used to be quite numerous (especially on the east side), and watch for poison ivy.  We didn’t encounter any rattlesnakes, however, we did see quite a bit of poison ivy along the north side of the Rimrock trail.  Lastly, flash floods are possible and when hiking the Creek Bottom trail be vigilant of the weather in surrounding areas as blue skies do not mean that it isn’t raining somewhere else.  There is a fee to enter the park of 7 dollars (they do take cards) and make sure to put the permit in the car window!