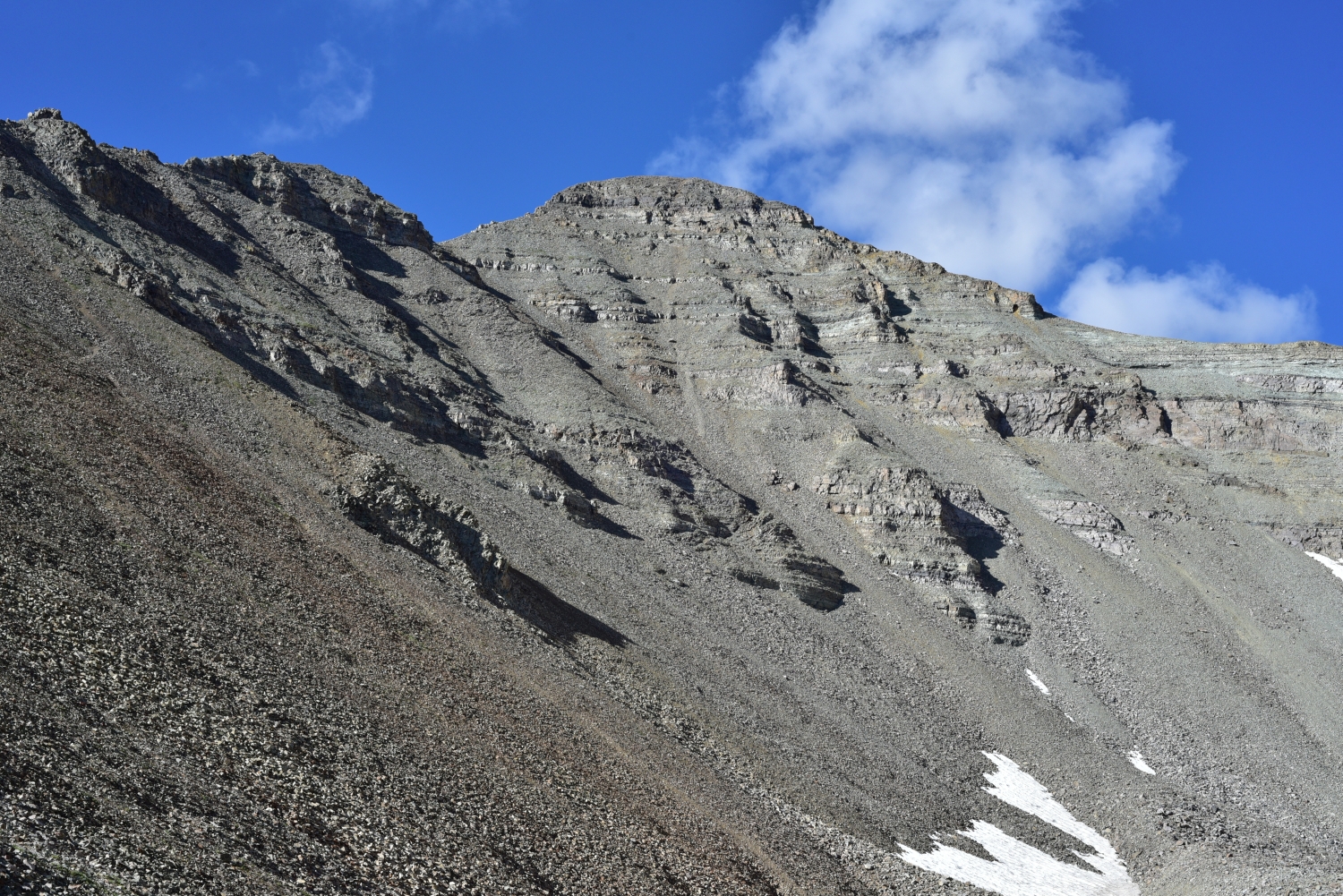 Our Return to Castle Peak

In the glorious heat and brilliance of mid summer,  we finally made the return trip to the Elk Mountains to reattempt Castle Peak and possibly tag the summit of its unranked neighbor, Conundrum. Two years ago on our annual trip to Aspen we made our first attempt at these peaks, but a sinus head cold and the waning hours in the days made us turn back shortly after reaching the end of the rough 4WD road and Montezuma Basin. For those not familar, Castle Peak is a 14er in the infamous Elk Mountain Range, home to the more famous Maroon Bells, Capitol Peak, and Pyramid Peak. Castle Peak is considered quite tame compared to the others and thus not as exciting, but it is said to provide a great introduction to the rotten rock of the Elks and offers some nice, easy scrambling opportunites. Starting at the lower TH, hikers are looking at a 13.5 mile day with approximately 4,600 feet of elevation gain. If you can make it further up the 4wD road, past Castle Creek just prior to the Pearl Pass Junction you can shorten the day to 7 miles RT and close to 3,100 feet of elevation gain. We did somewhere in between logging in 10.5 miles and 4,000 feet of elevation gain.  Tagging the summit of Conundrum will add approximately one mile and close to 300 feet of elevation gain to the day. Our GPS maps from the day can be seen below: 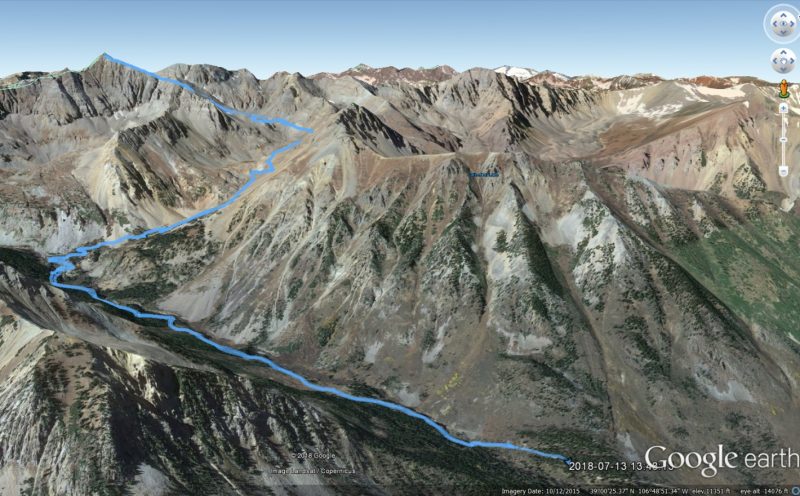 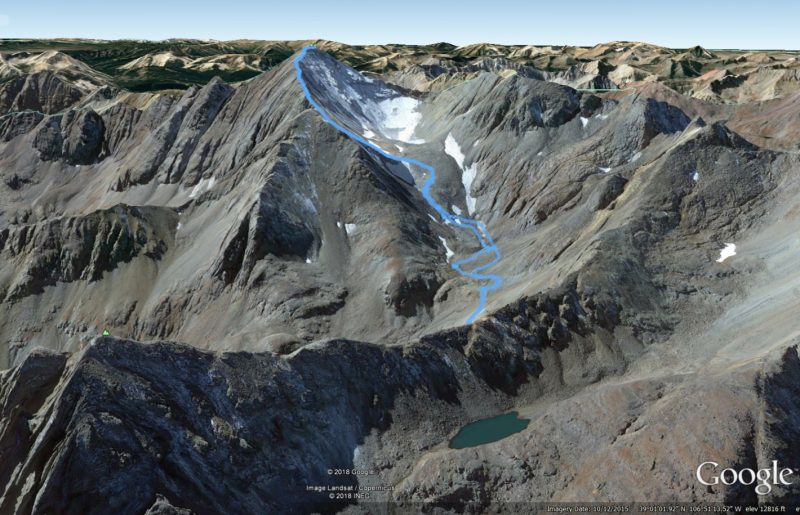 On Friday the 13th of July, we left the comfort of our Snowmass condo in the cool, predawn air and headed back to Castle Creek road to begin our attempt. After following the road for 12ish miles, we turned right to begin the rough drive on the Forest 102 road. This is the start of the lower TH, and there is parking for several cars here with low clearance. We chose to continue up the road, as we did in 2016 in a stock X-terra. The first mile of the road is relatively tame for a 4WD road and passes by several dispersed camping sites, though we would not recommend taking a low clearance vehicle very far. We continued on the road for about 1.3 miles until we reached the creek crossing. Two years ago we trudged ahead and easily crossed the river. This time upon inspection we opted to park at a pull off just shy of the crossing, as the stream appeared a little gnarlier than we remembered. Plus we also wanted the extra high altitude training miles. This ended up adding about 3 miles to our RT total for the day. For those that haven’t traveled up the 102, there is also a nice footbridge that provides crossing for hikers of which we ended up utilizing. Seen below are photos of the Creek Crossing and footbridge. 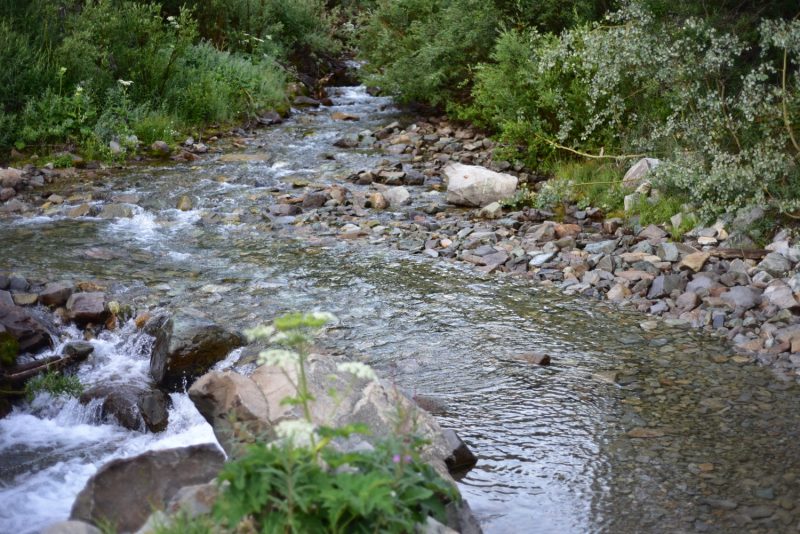 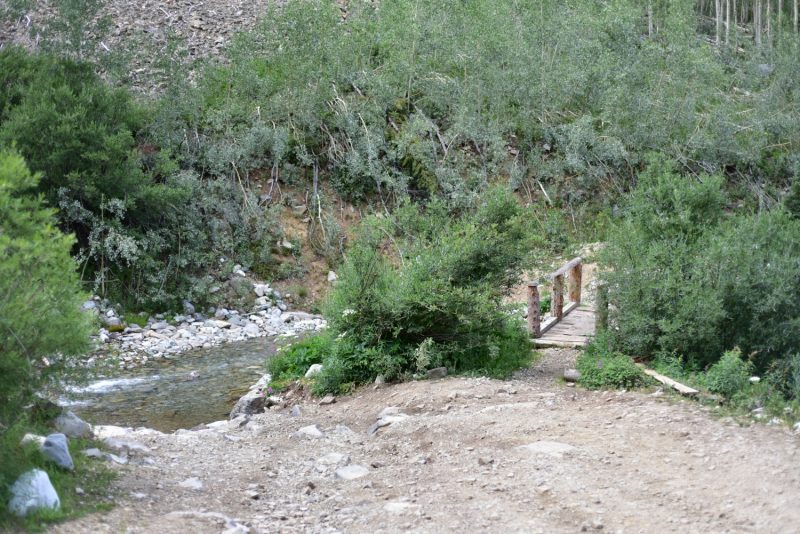 We continued nearly 2 miles past the creek up the trail (really just a road) to the Pearl Pass road junction. Prior to reaching the junction, we crossed a wooden bridge over an exquisite waterwall. It was a nice break in the monotony of 4WD drive road hiking. At the junction, we stayed right and started to rapidly gain elevation up some steep switchbacks. This was the point at which we were sure we would not have felt comfortable taking the truck. The road continued to lead us up into the basin, and soon to the trees began to disappear. To our shock and surprise, we saw what looked to be a Ford Expedition make it just past treeline on this nasty road. That trip had to be quite adventurous. The old mining road led us all the way up to 12,800 feet  to the base of the steep southwest headwall. Much of the year there is quite a bit of snow through here, but we only had to cross through a 200 yard patch in mid-July much to our disappointment. Prior to reaching the snow, we picked our way through a class 2 boulder field. The snow was a much enjoyed break from the loose talus. Seen below are photos of the acsent up the basin and the trudge up the headwall. 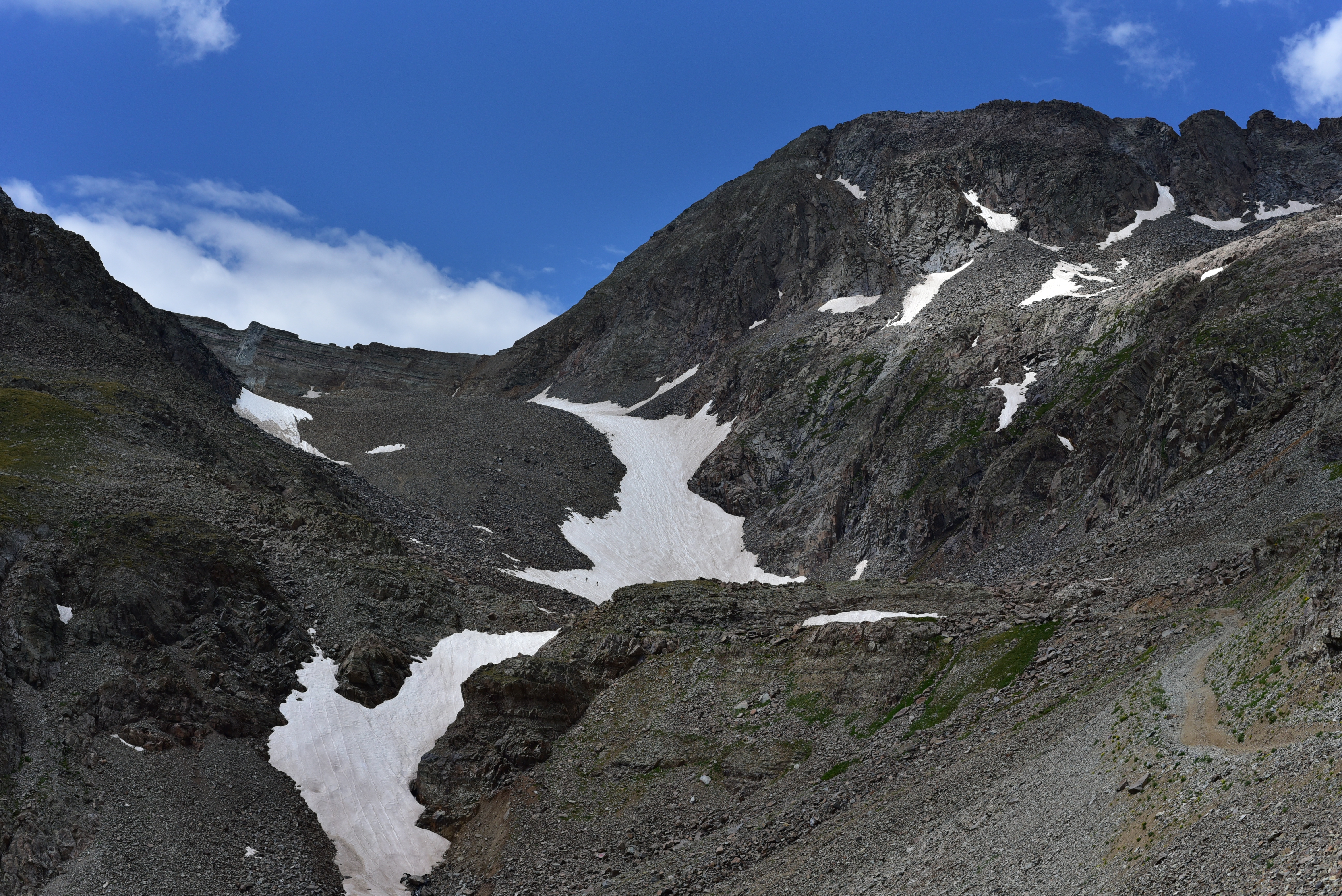 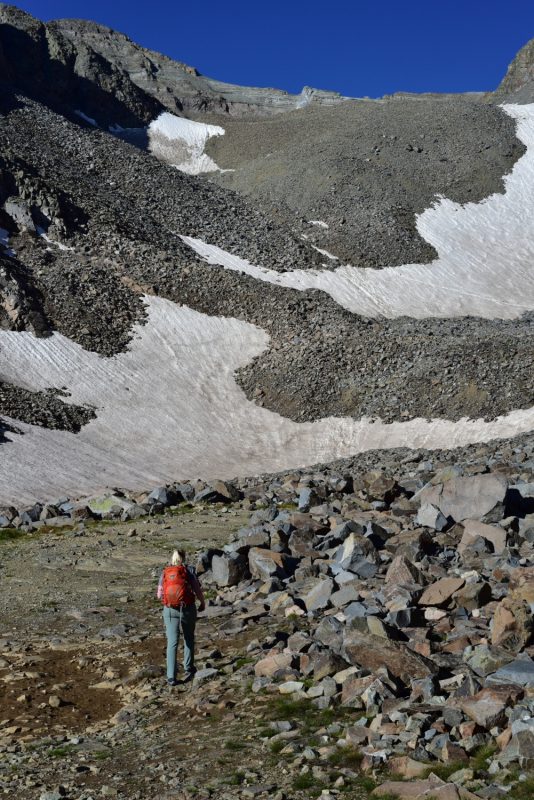 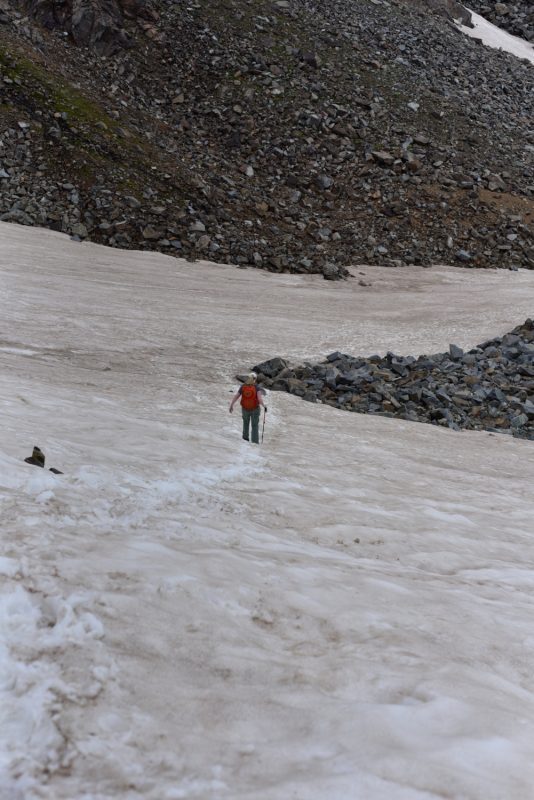 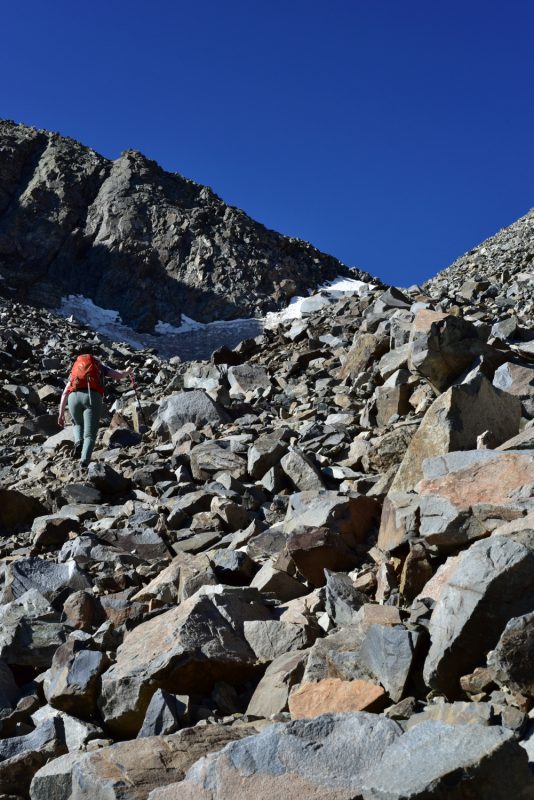 After about 500 vertical feet of snow/talus climbing, we reached the upper basin and were at approximately 13,300 feet. From here, the trail veers left towards the northeast ridge. We found gaining the ridge to be fairly steep, loose, and a bit of a slog. Once we reached the ridge crest, the real fun began. Some say that the ridge can be kept at difficult class 2, others including the Elk Range Mountain Safety Coalition say that the ridge is a solid class 3.  After tackling the ridge, we felt like it could be given an easy class 3 ranking. However, we didn’t make an attempt to try and keep it class 2 and rather enjoyed any opportunity to use our hands and climb a little bit. That being said, there was some moderate exposure on the ridge that might bother someone sensitive to heights. Seen below are several photographs of the ridge and some of the minor obstacles to the summit. 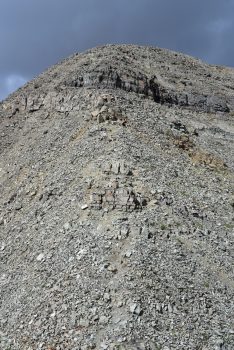 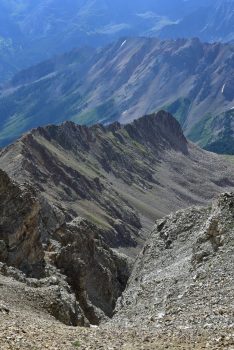 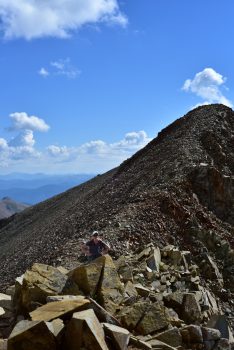 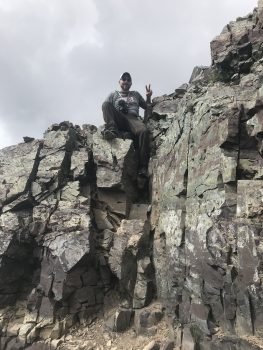 Our Time on the Summit

Just shy of the summit, there is a short downclimb to a saddle and then a brief 250 feet up loose terrain. We made quick work of this and in a few minutes were enjoying some awesome views on top of Castle Peak. This peak is generally considered the least impressive/favorite in the Elk Range, but don’t let that deter you from venturing out here. The area is fantastic and offers amazing views.  We were alone when we reached the summit, but two other climbing groups joined shortly afterward. Conundrum looked relatively close with a fairly obvious trail leading up the south ridge of the peak. However, some nasty looking clouds were building. We debated seeing how quickly we could make it over, but ultimately decided we didn’t want to get caught in bad weather. Plus we were going to have to probably reascend Castle to make this work, as the late July conditions made descending directly into the basin from Conundrum’s summit look very dangerous.  Seen below are photos from the summit. 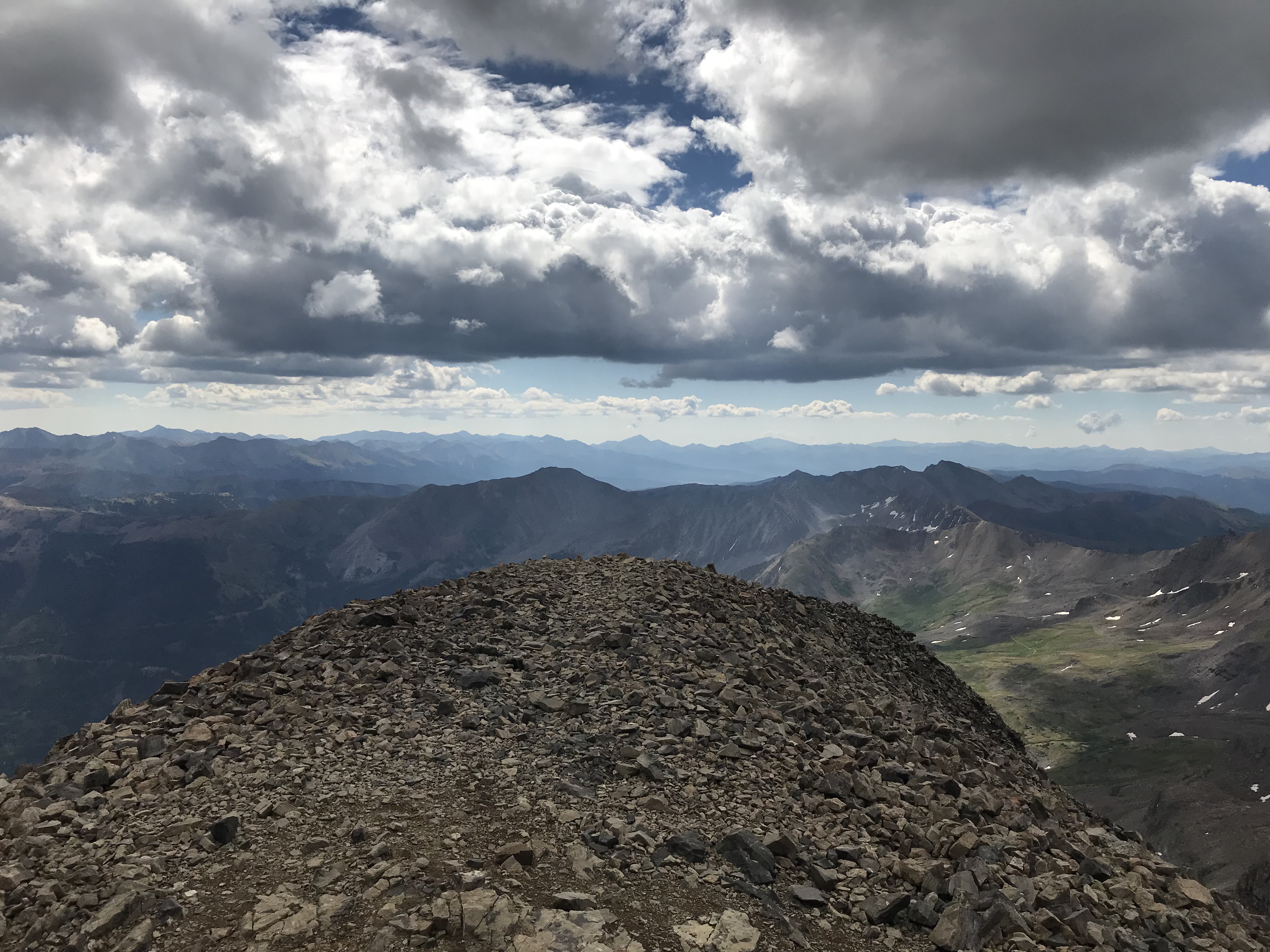 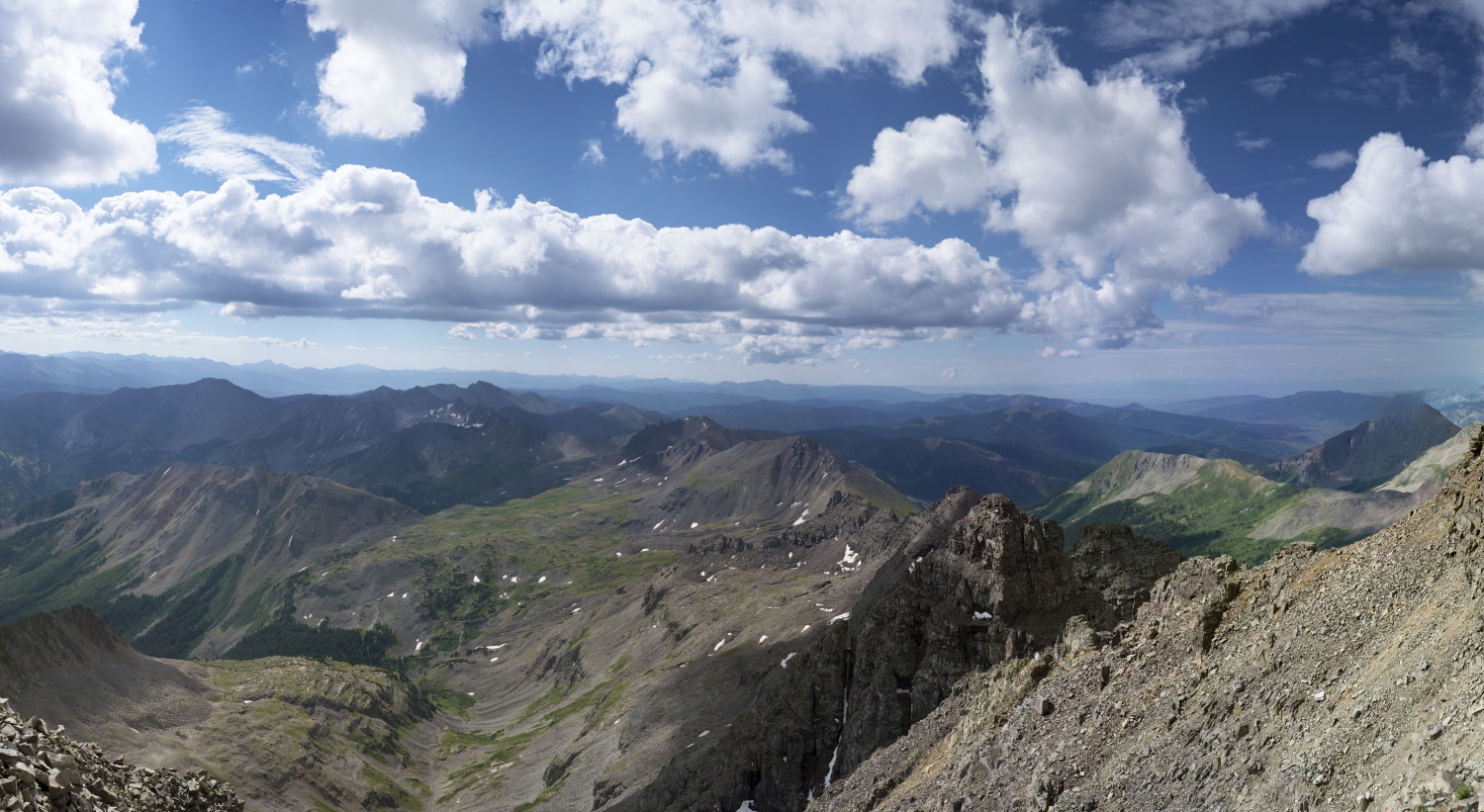 The Descent back into Montezuma Basin

Descending the ridge was almost as much fun as the ascent, but the darkening clouds forced us to focus and keep a quick pace. We passed one of the parties heading off the ridge that we had met earlier on this hike through the basin. They had taken a few dogs on the trek, one of which was very unhappy with the rocky ridgeline terrain. They had to carry the pup off the mountain and unfortunatley couldn’t tag the summit. Once off the ridge, we scree surfed and talus hopped until we reached the snowfield which was a welcome break. Once back at the start of the rough road, we relaxed for a few minutes at a small glacial fed pond. After several minutes of basking in the warm mid-day sun, we gathered our things and began the long hike back down the road. Since, we were in such a hurry to summit on the way up, we didn’t have a chance to capture many images. We broke up the march down by pausing for several photos which we have shared below. The dark clouds that had frightend us away from Conundrum had now moved away giving way to a brilliant bluebird sky. Regret momentarily lingered before our tired bodies welcomed the decision to shorten the day. 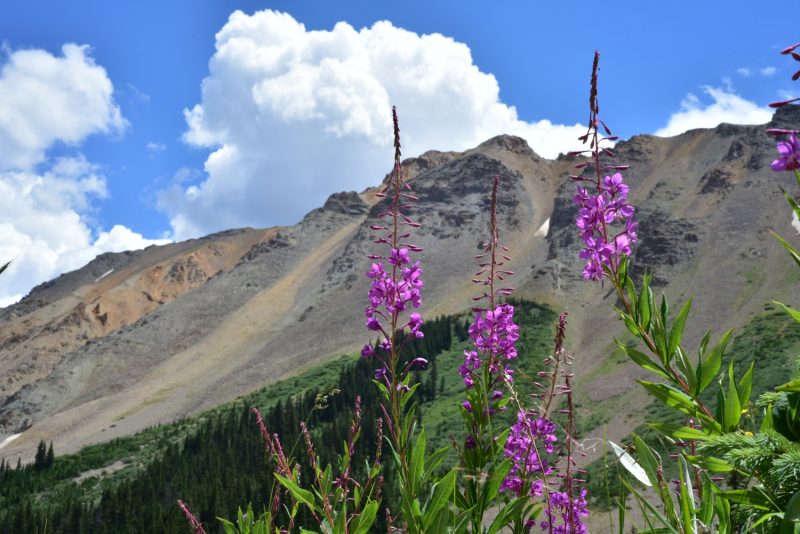 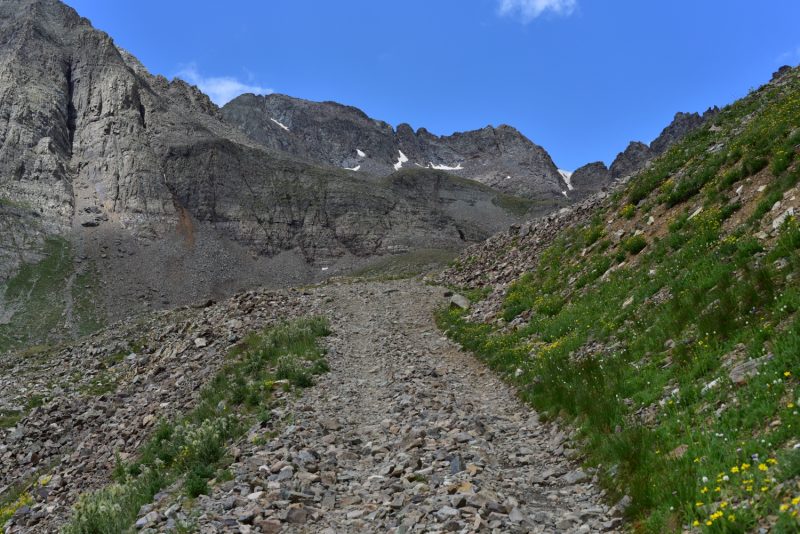 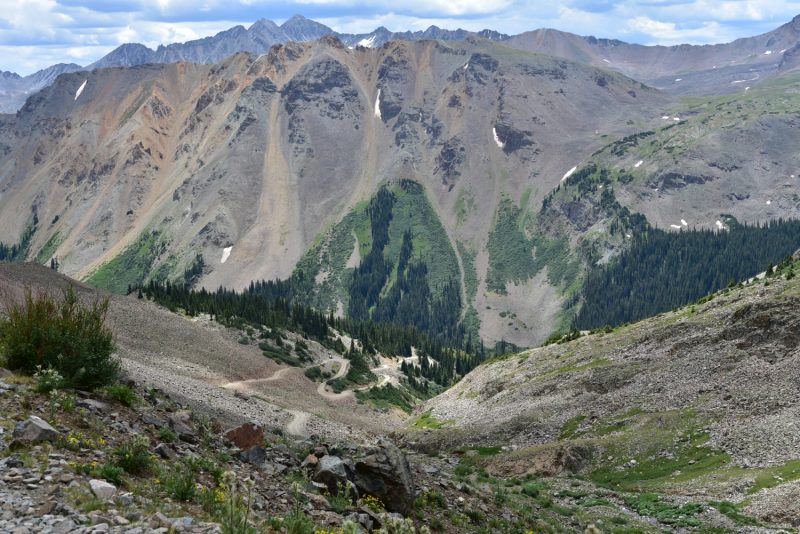 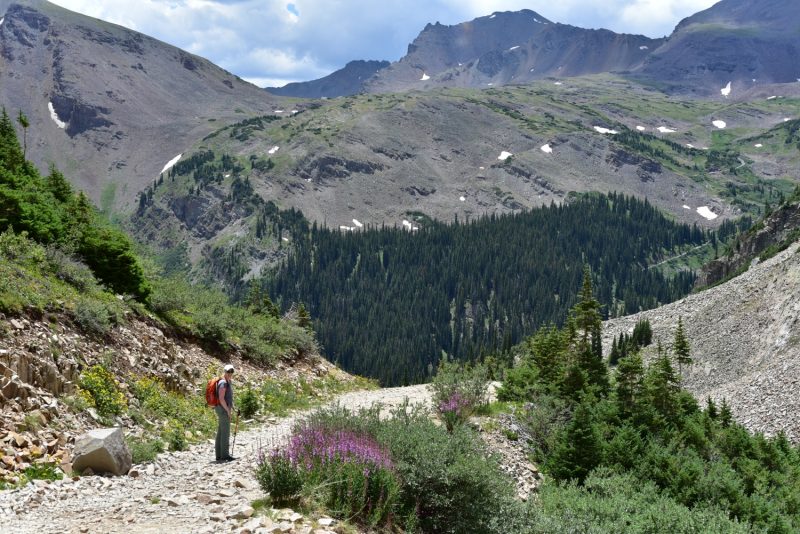 Once back at the car, we shed our hiking boots and downed a warm gateraide forgotten in the car. We made the short drive back to Aspen and enjoyed a late lunch at 520 Grill. Though we were only able to tag Castle, we considered the day a success. Two years ago had brought us zero summits and even a few tears of disappointment.  We will just have to keep hiking up that long road into the basin until the job is done. Besides, the Colorado 14er quest is not one that we are particularly ready to end. Plus, any adventure that takes us back to the beauty of Pitkin County is a welcome escape. Now enjoy a  video of our hike/climb.