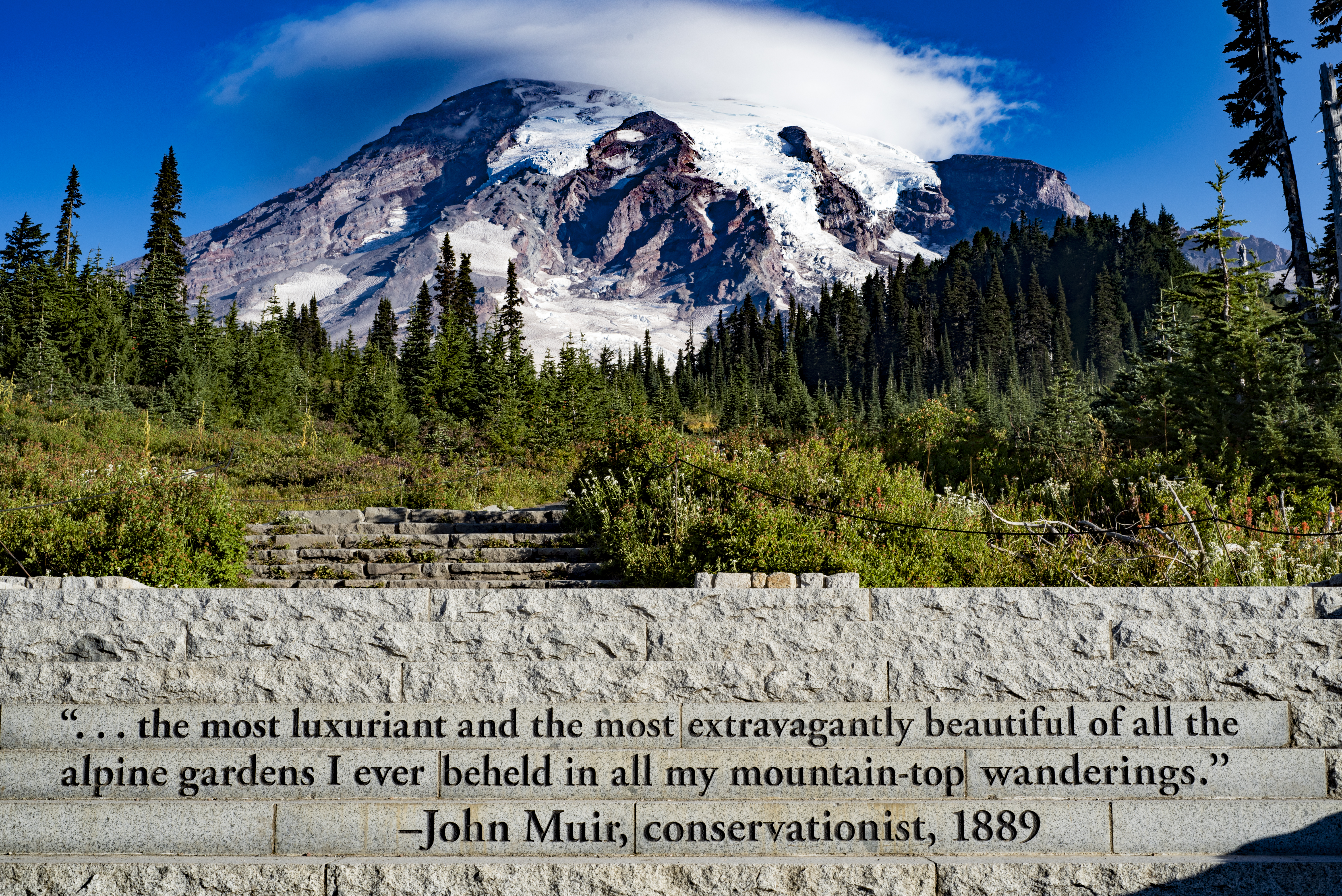 Some Background and History

A rich geological and human history both contribute to the wonder of the stratovolacano that is Mount Rainer.  The peak was forged by fire and years of lava, ash, and pumice piling up, layer upon layer, eventually forming a summit cone, a consequence of thousands of years of volcanic activity. Close to 6,000 years ago, the peak had a violent eruption which knocked off the cone, and subsuquent years of volcanic activity left the peak with two overlapping craters at the top. It is the largest peak in the Cascade Range and sits prominently above all other peaks in the nearby vicinity at a stunning 14,411 feet above sea level. For perspective, the others sit around 6,000 feet. The mountain face is constantly changing as fluctuations in the weather and temperature shift and melt its heavily glaciated regions. Every few hundred years, small to moderate eruptions occur, with the most recent occuring in 1894. Importantly, the mountain is still an active volcano.

The Mount Rainier region has always pulled humanity close, providing natural resources and in more modern times, recreational ones. Native American tribes have gathered for millenia to hunt and gather resources here. The first recorded ascent occured in 1870 by Rhode Islander, Hazard Stevens. The park was established in 1899, and the true infrastructure began to take shape following the creation of the National Park Service in 1916, though the road to Paradise had been in place since 1910. There has been some tumultuous history of the park through the years, that we won’t go into here, but relative stabilty has been achieved since the 1960s.  Visitation continues to boom, with 1.8 million visits recorded in 2016. The number of attempted climbs of Mount Rainier is also large. In the last 8 years, there have been between 10,000 and 11,000 yearly registered climbers. 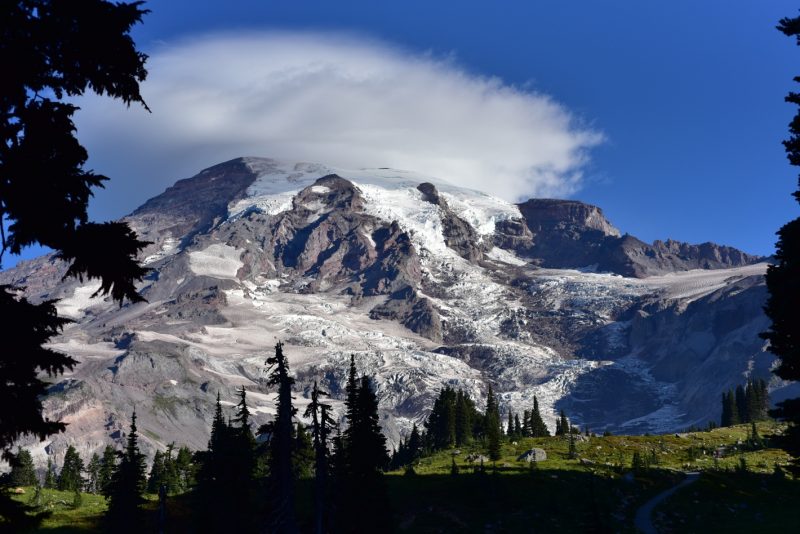 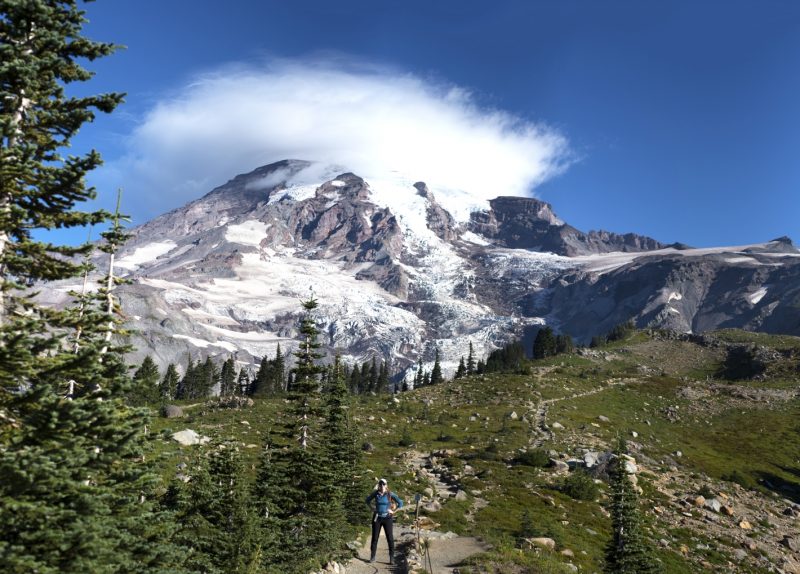 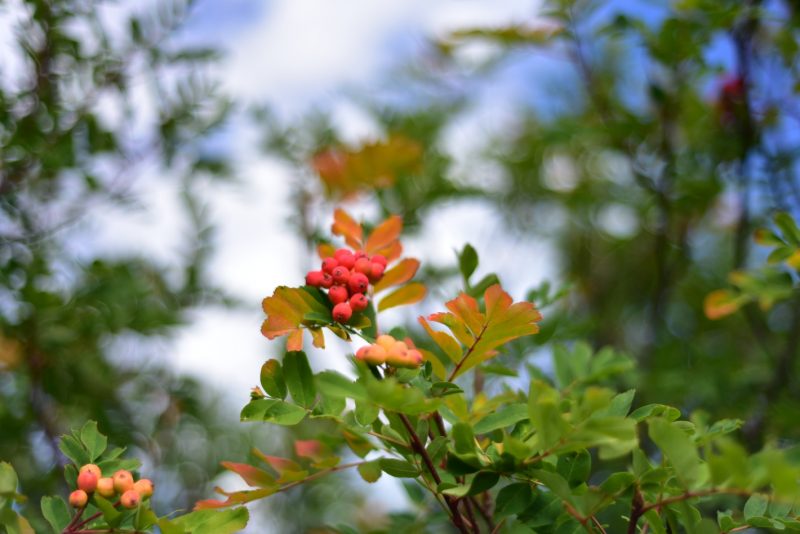 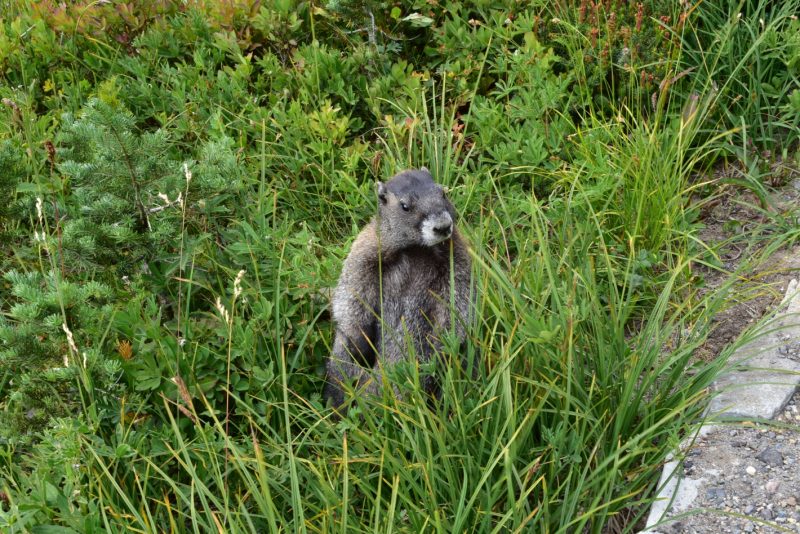 We have not escaped the allure of Mount Rainier and decided to plan a visit to the mountain in mid-September as part of a week long excursion to the Pacific Northwest. Though we did not decide to make an attempt at the summit as we had insufficient time to secure guiding resources, we did want to go halfway and visit the famous Camp Muir.  Camp Muir, named after the famous alpinist, is nestled at 10,100 feet above the Muir Snowfield and on the edge of the Cowlitz Glacier and serves as base-camp for those planning a summit attempt. Reaching the camp requires a mix of trail hiking and traversing the unmarked Muir Snowfield. The one way trip is roughly 4.5 miles with close to 4,800 feet of elevation gain from the Paradise Visitor Center. The National Park Service recommends the trip for only experienced hikers as there is no marked path up the 2.2 miles of the snowfield and white-outs are frequent.

On September 6th, we flew in to Sea-Tac and immediately drove down to our quaint cabin nestled in the woods approximately two miles from the park entrance. After a good night’s rest, we arose at dawn and made the short drive into the park to the Paradise Hiker’s parking lot. Blue, clear skies were abundant, and we began our journey on the Skyline Trail. The trail is an extremely steep and well-paved path for the first 10-15 minutes of hiking before it turns into a much more pleasant gravel/dirt path. There were several signs along the way to direct us to the direction of Camp Muir on this portion of the hike as many side trails exist to gain different vantage points of the the nearby glaciers and the mountain. Near mile 1.1, there was a junction in which both routes go the correct direction. Going left leads to Glacier Vista, overlooking the Nisqually Glacier to the west which also has a waterfall. Going right bypasses the ridgetop and takes hikers on a more direct route. Of note, the trails do reconnect fairly quickly. On the way up, we bypassed the overlook and continued toward our objective. At approximately 1.6 miles, we saw the sign for Pebble Creek and followed it to the creek at about 2.1 miles. We climbed over the creek and past McClure rock. Looking down at our GPS, we noted an elevation of about 7,300 feet. The trail had now ended. It was time to throw on the spikes. We entered the snow. 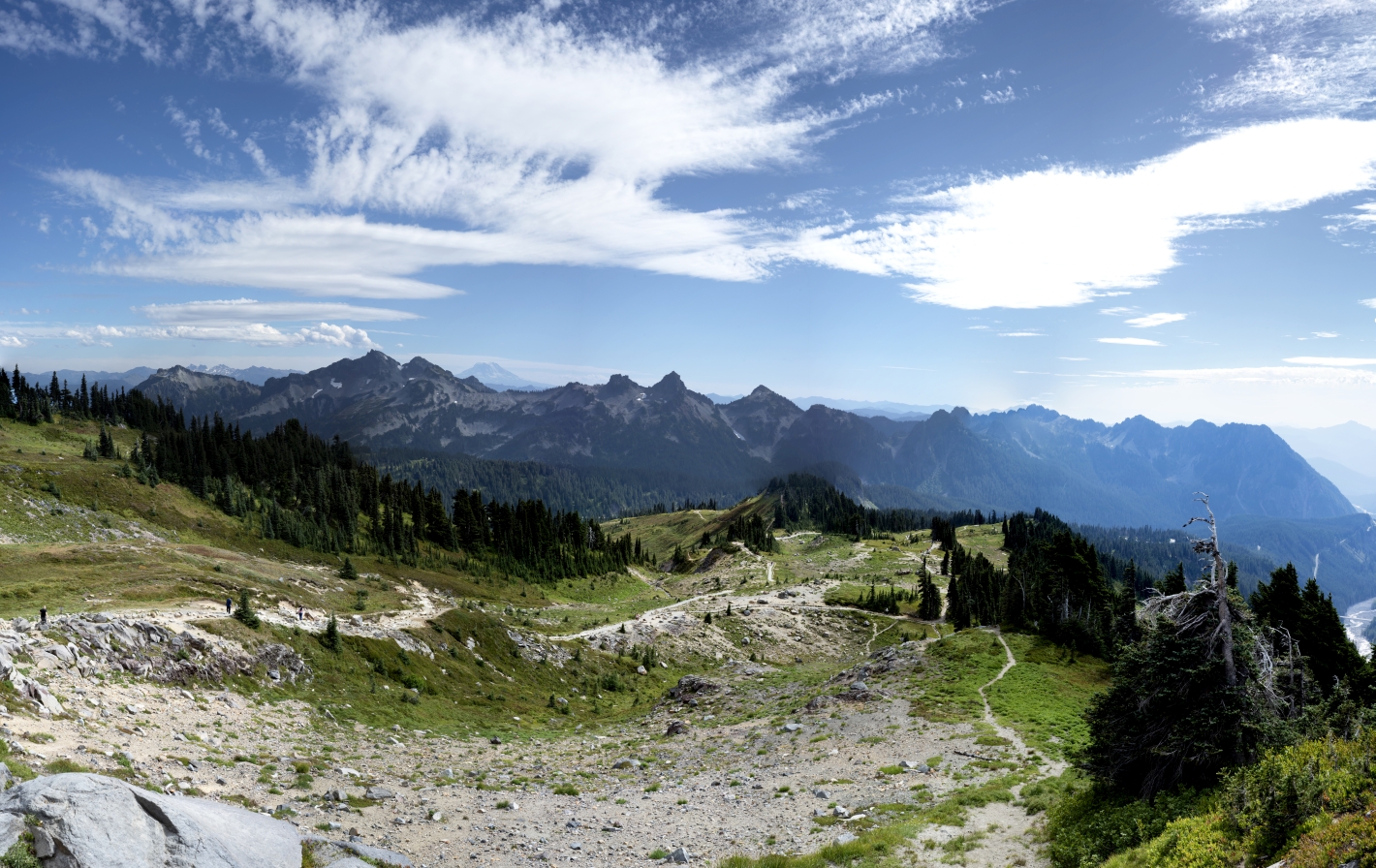 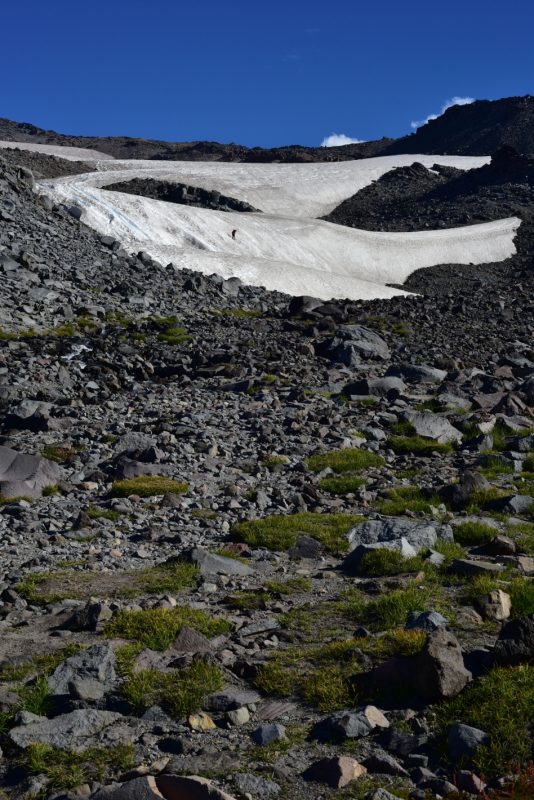 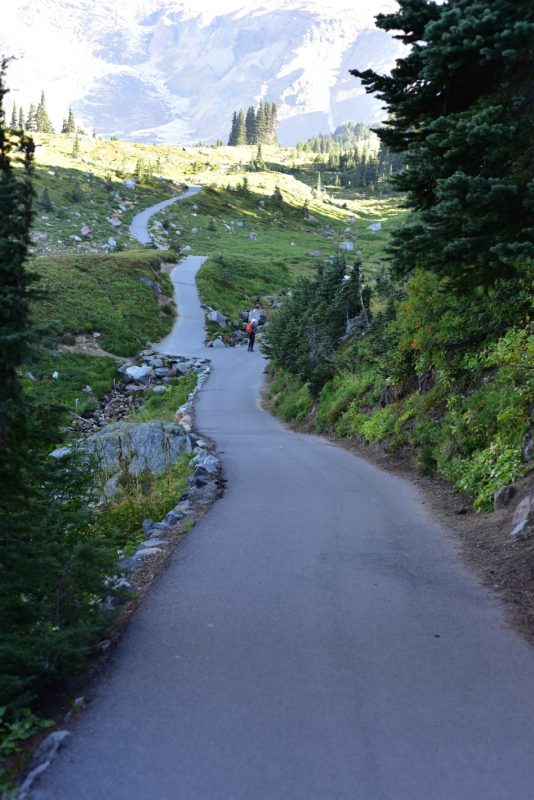 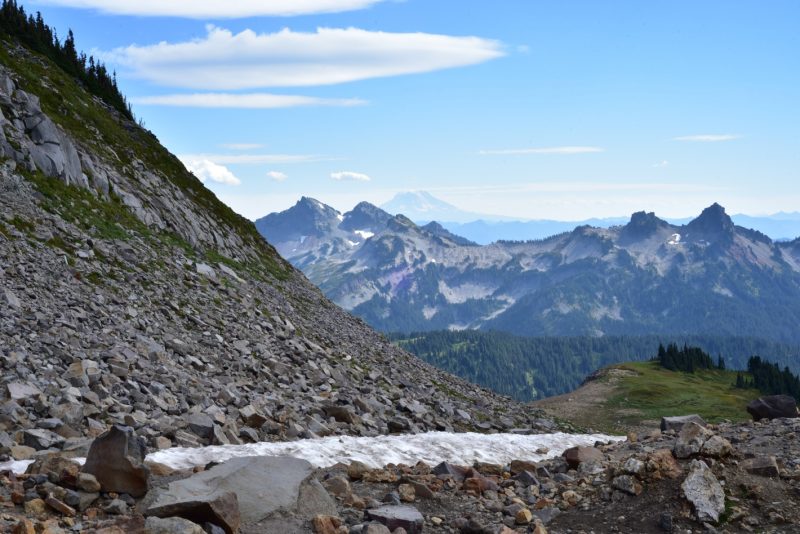 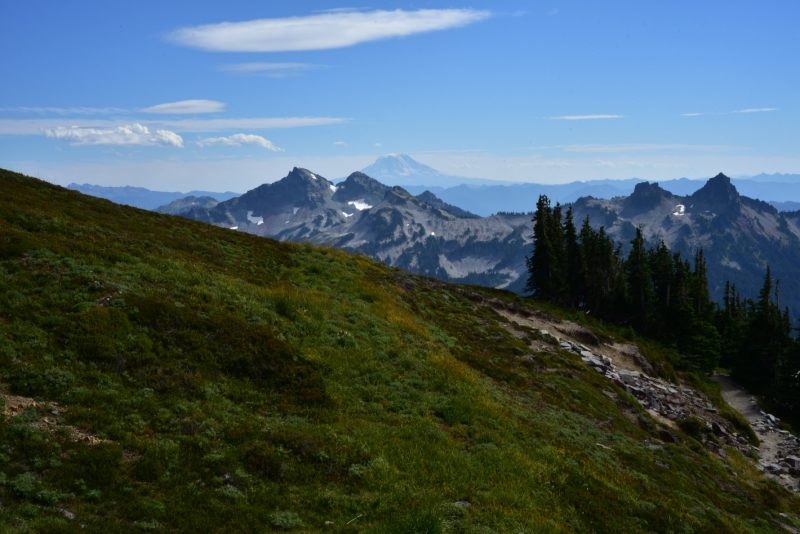 Our spikes grabbed the snow easily, and we proceeded upward and closer to the upper reaches of Mount Rainier. We took the most obvious path forward and kept near earlier bootpack and some glissading paths. Camp Muir was not yet visible. The snowfield appeared to stretch for miles and miles. Intermittently, there were some brief breaks in the snow via small sections of rocky outcroppings. We used one once to sit and dress a blister since it was preferable to sitting in wet snow. The snow was a strange redish muddy color in places. We’ve been told this is common in late summer due to pumice and ash. At 8,600 feet, we noted the turn off for the ridge that connects to Anvil Rock, a 9,000 something foot detour on the way to Camp Muir.  We had our goal in site and did not choose to venture on this scenic path this time around. In the remaining mile on the snowfield, we acsended roughly 1,500 feet. It was intense. We kept checking the GPS thinking that it must be off or something. Surely we are higher in elevation with only a mile to go we thought.  There were several wire wands in the snow with florescent tape marking the best path forward, which was helpful considering a few crevasses had started opening up on the snowfield. One we noted was 3 feet wide in places.  Camp Muir and the snowfield are nearly completely surrounded by glaciers, and there are several warning in place by the National Park Service reminding hikers and climbers of the dangers of climbing the snowfield. Sadly, this hike has claimed a few lives when conditions turned poor. Backpacker magazine ranks the hike as one of the 10 most dangerous in America. 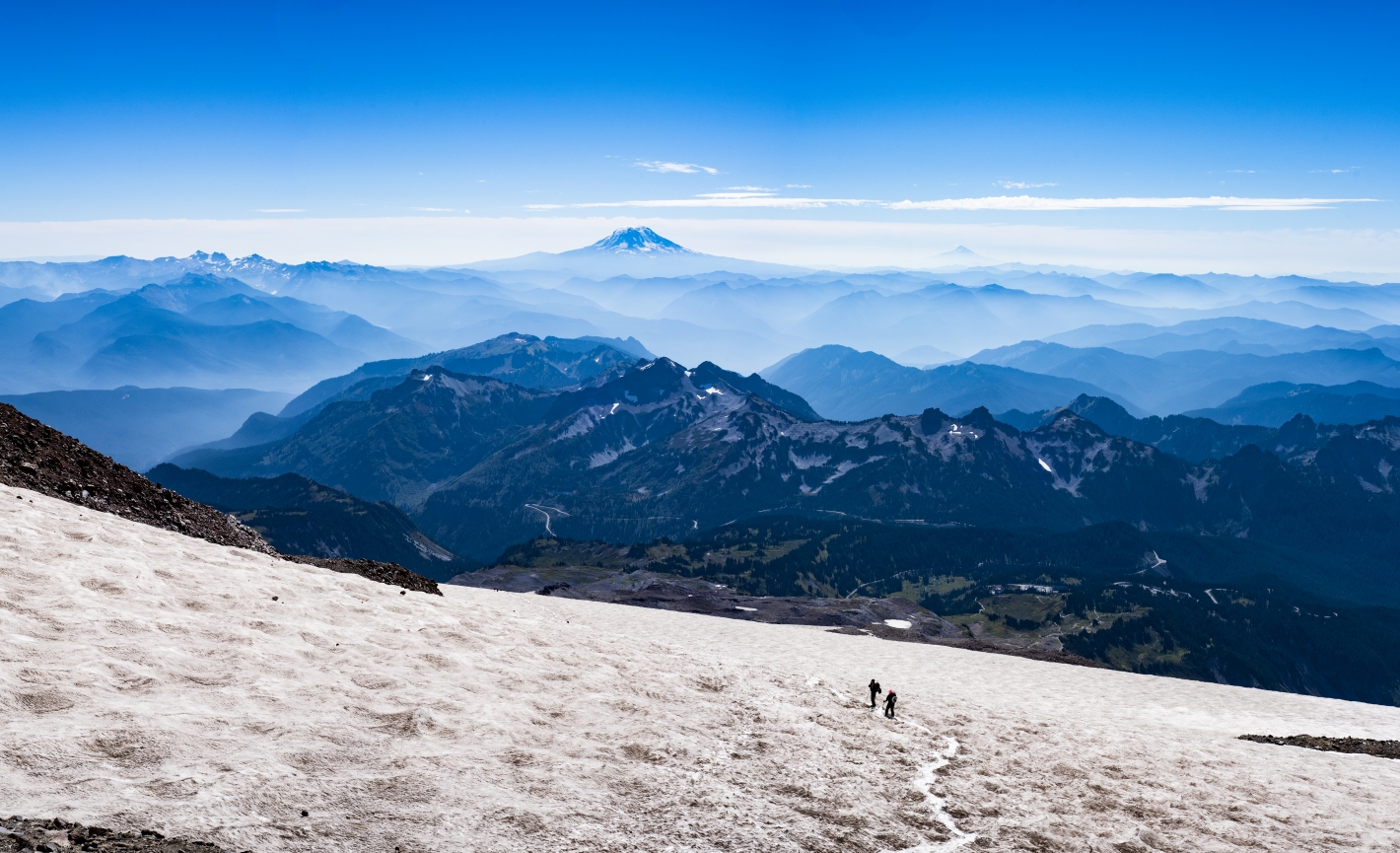 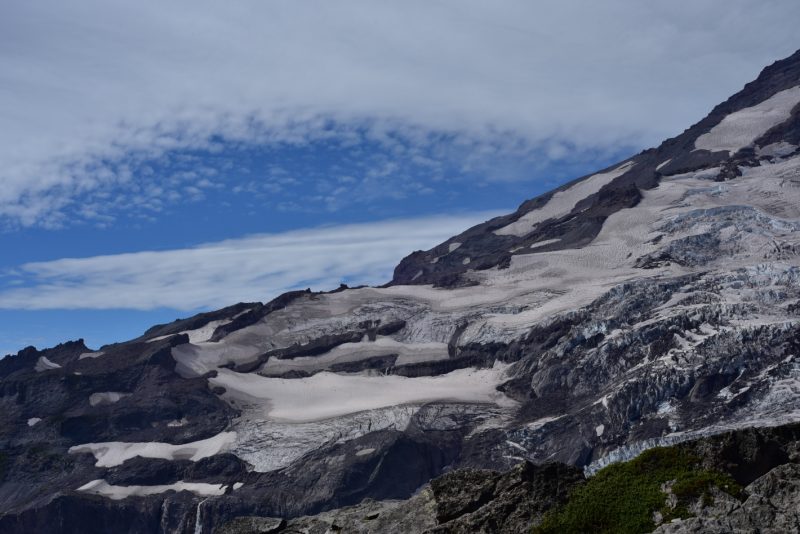 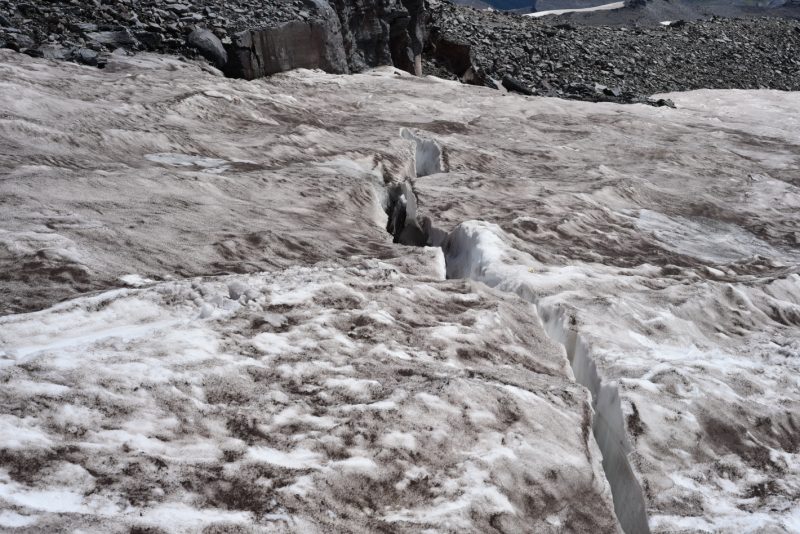 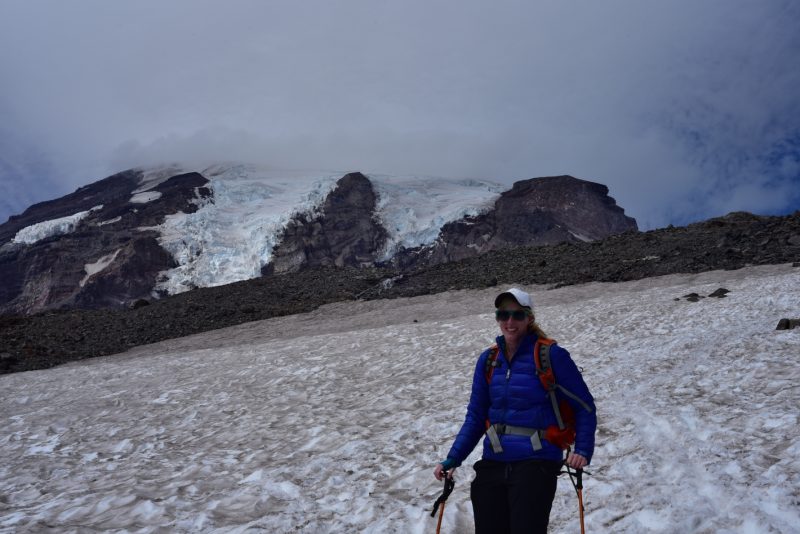 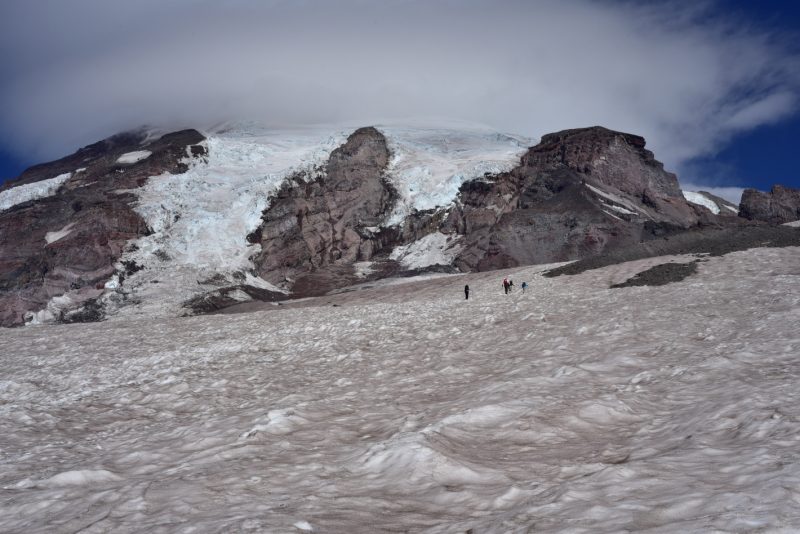 Camp Muir was originally called Cloud camp, and aptly so. The small camp sits above the Muir snowfield on the edge of the Cowlitz Glacier seemingly floating above the world below. After John Muir made the 6th recorded ascent in 1888, the name of the camp changed. Excitement ensued as we began to get our first glances of the camp. The first structure that camp into view was actually the guide hut.  Only the famous stone structures would come into focus as we got much closer. We followed the boot pack and continued upward. It was a bit farther than it looked.  The blue tint of the glaciers were quite apparent now, and finally we touched of our feet on hard rocky surface. We had made it to Camp Muir. While we were only sitting slightly above 10,000 feet, the hike was not too unlike many of our treks up to 14,000 feet. The elevation gain was intense. The camp was full of life and busy just before noon on a pleasant Friday. There were several guide groups and camps already set up on the Cowlitz glacier. Half a dozen or so day hikers were already perched at the front of the stone sleep shelter. We spent almost 45 minutes at the camp, eating some food and relaxing in the beauty of our surroundings.  It was interesting to see tents pitched on the edge of 6 foot wide crevasses on Cowlitz Glacier. There were several warning signs in place stating that unropped travel past this point was not advised. As we looked south, we could see very clearly Mount Adams and Mount St. Helens. Mount Hood was slighlty visible between these two mountains. 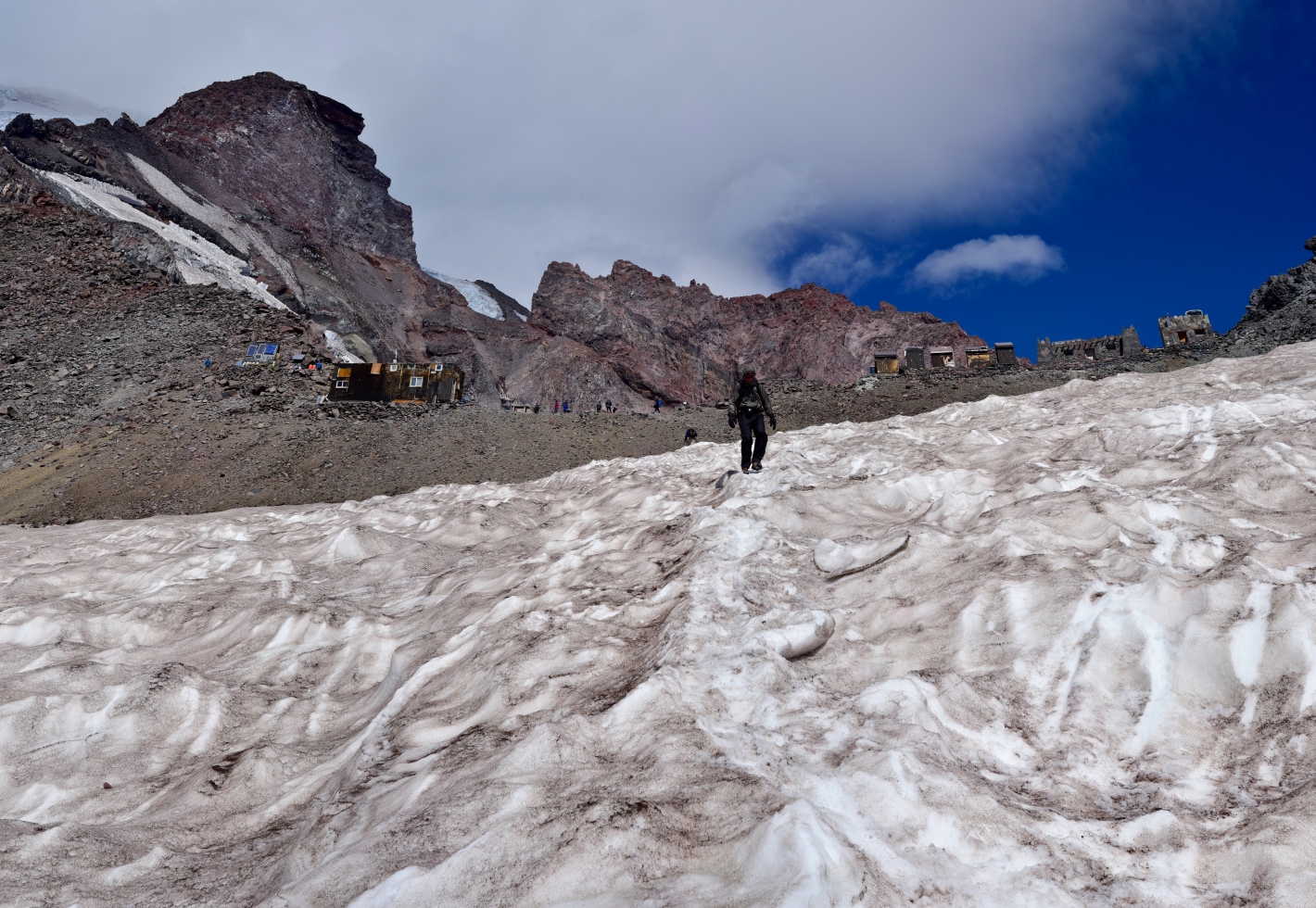 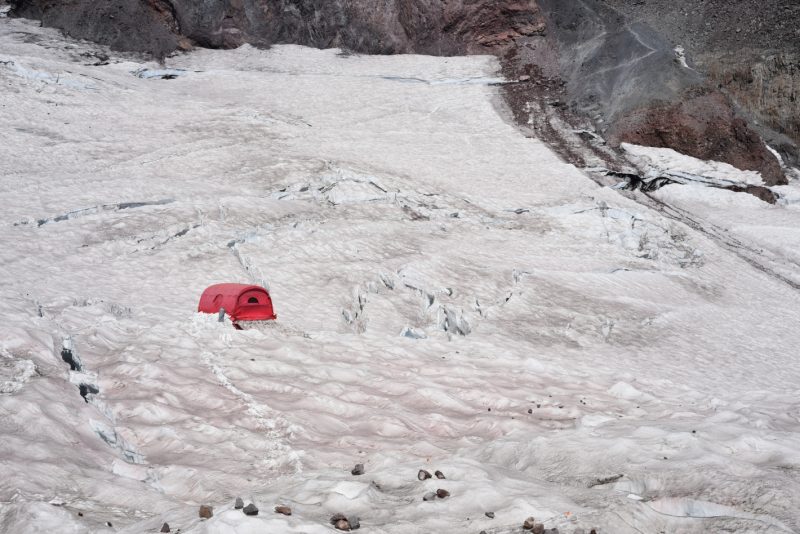 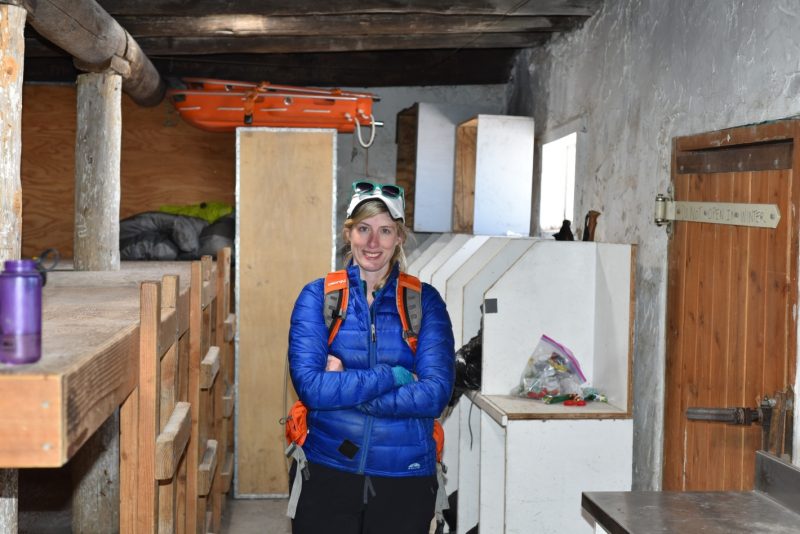 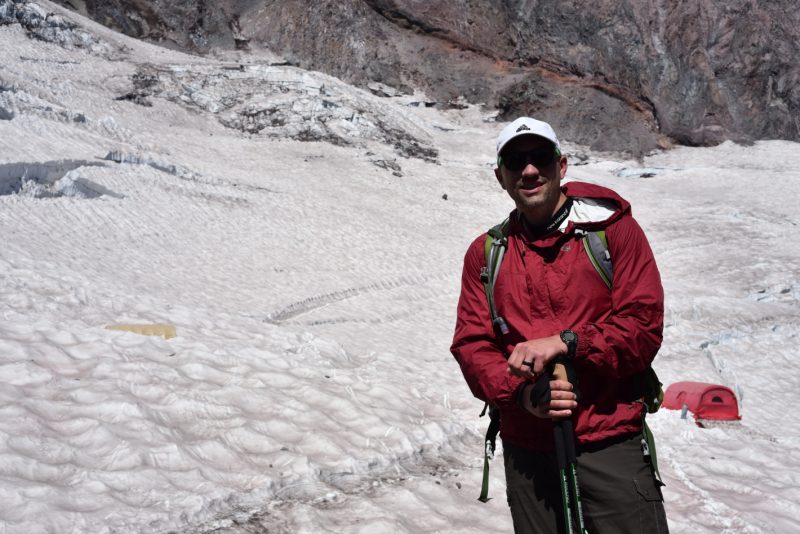 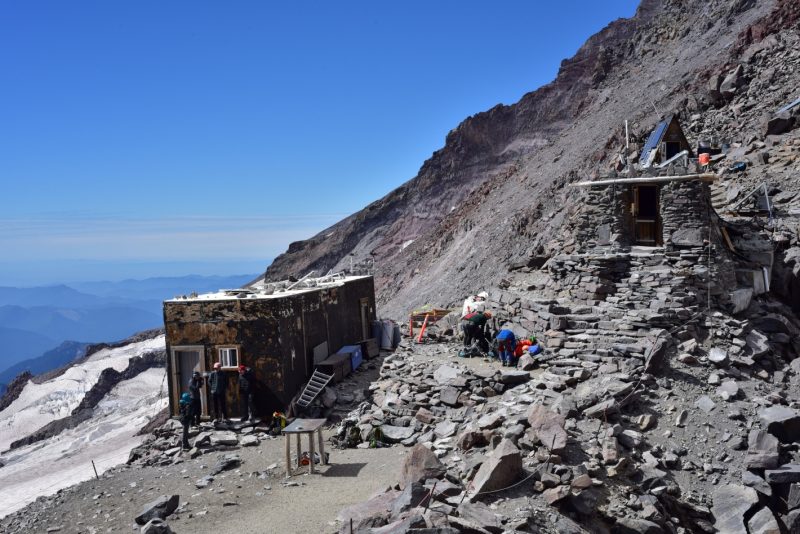 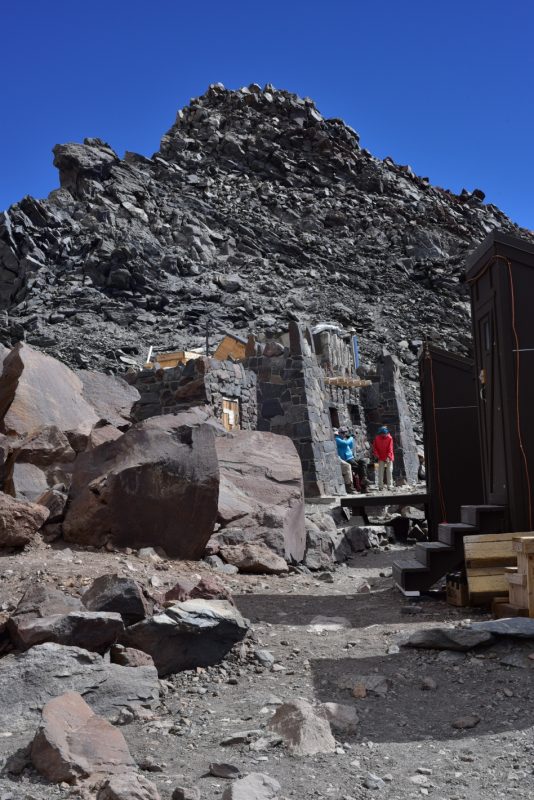 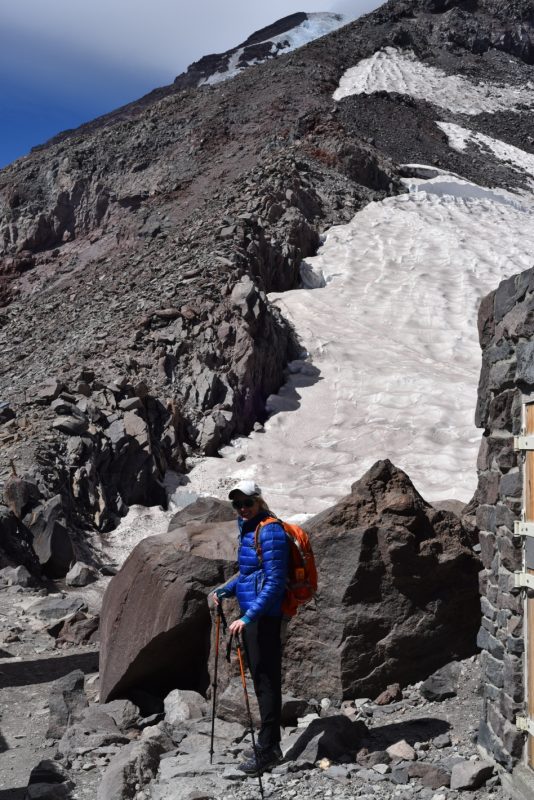 It was finally time to return to the world below, and we reluctantly put our spikes back on and began our descent. It was afternoon now, and the snow had gotten quiet slushy. Even in spikes, we were slipping and sliding.  We eventually determined that the most efficient route down the mountain was via running/sliding down the mushy snow in our boots. There were several glissading paths that we saw on the way down, but at this point, unless they were steep, it was very hard to gain any speed. Scarily, we noted that one glissade path led straight into a crevasse. Though it was only 1 to 2 feet wide, it was still a scary prospect to think that a joyous slide might land you in a deep ice pit. On the way down, we saw several guide-led groups heading up to Camp Muir for a night’s rest prior to the summit push. Many of them looked a bit miserable to be honest.  Though one day, we may be returning and participating in that march, today we were free to frolick down the mountain. On the final section of steep snow before reaching Pebble Creek, there was a short but very steep glissade. Several groups gathered here, and we all took turns gleefully sliding down it. There was even a bump that allowed those of us with enough speed to catch some air. Pure Joy. 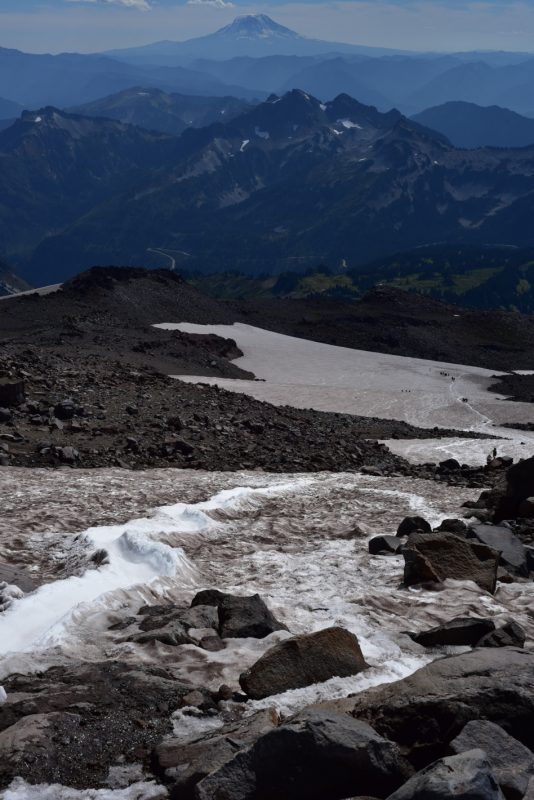 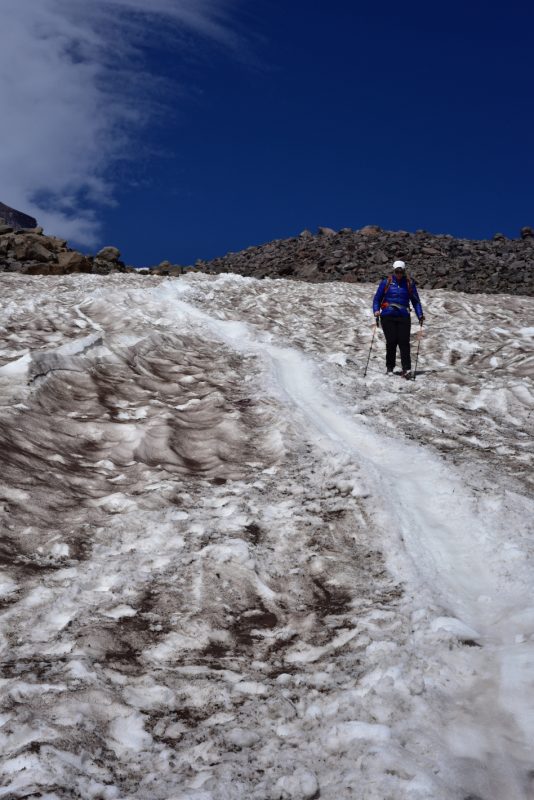 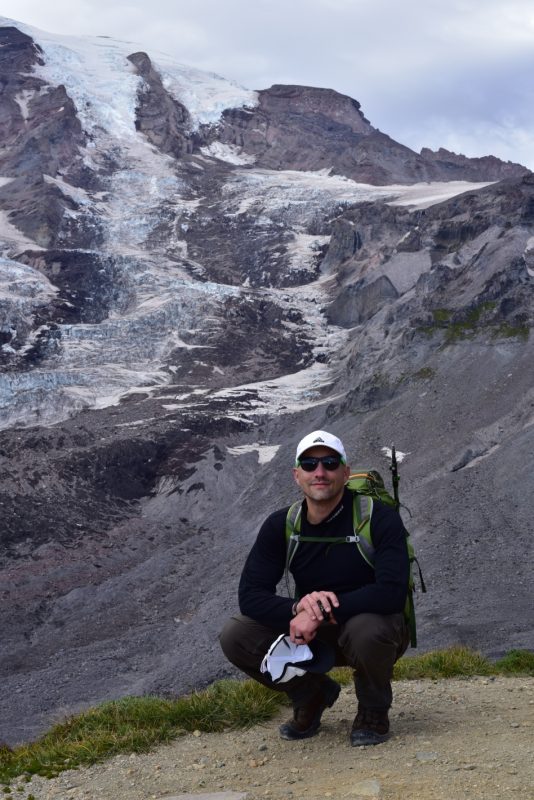 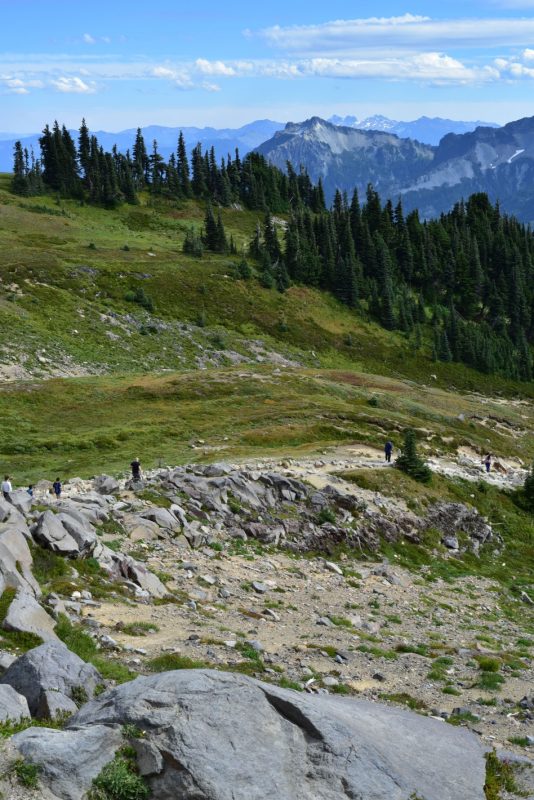 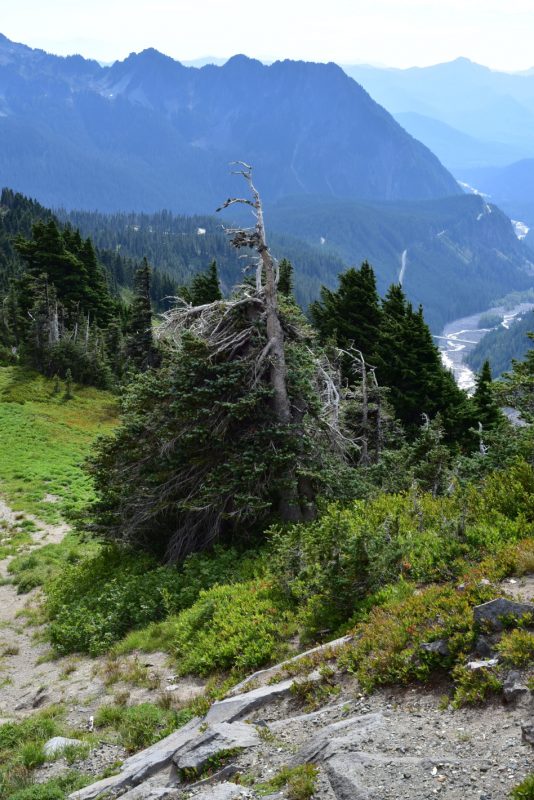 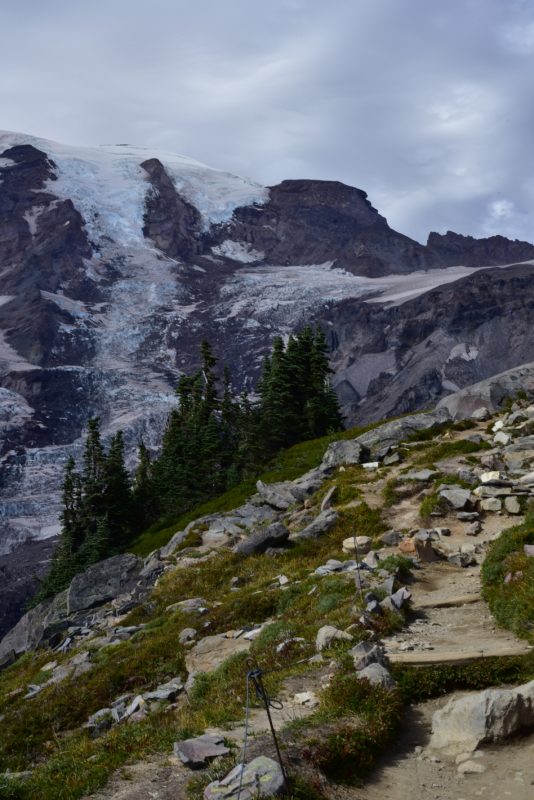 Once on dry, snow free ground we took our time enjoying the Skyline Trail. We took the loop that looks directly over the Nisqually Glacier this time. There were now hundreds of people out on the trail enjoying the bluebird day and exquisite surroundings. We returned to the Paradise Visitor Center and enjoyed the small but interesting display they had on the stratovolcano and then determined it was time for some real food and a soak in the hot tub at our Cabin. On the drive out of the park, we made one extra stop at Narada Falls for some beautiful waterfall pictures. This requires just a short hike down a steep path.

The hike to Camp Muir was strenuous but rewarding and fun. The scenary was breathtaking virtually the entire hike. Prospective hikers to Camp Muir should remember that part of the trail is on a long snowfield covering nearly 2.2 miles and very steep at portions. While we had a safe fun day, weather can and does often deteriorate quickly and can turn the snowfield to a blanket of white leaving hikers with no sense of direction. This is particularing harrowing here, because there are cliffs and crevasses surrounding the snowfield.  Compass/map  and GPS are critical for this trek.

Side notes: Verizon had some cell reception at Camp Muir and a bit near Pebble Creek.  AT&T had none…anywhere. Also there is a cafeteria at the Paradise Visitor Center. We got small snacks here and they were tasty but  expensive. We ask the cashier why the prices are so high. He replied ” that’s the high altitude tax” of which we replied “hey man, this is the elevation of our living room!” To put things in perspective, Paradise is only 5,400 feet above sea level, close to that of our home in the Mile High City.  Sigh. Everything is relative. And lastly, eat dinner at Copper Creek Inn Restaurant right outside the park. It was amazing!