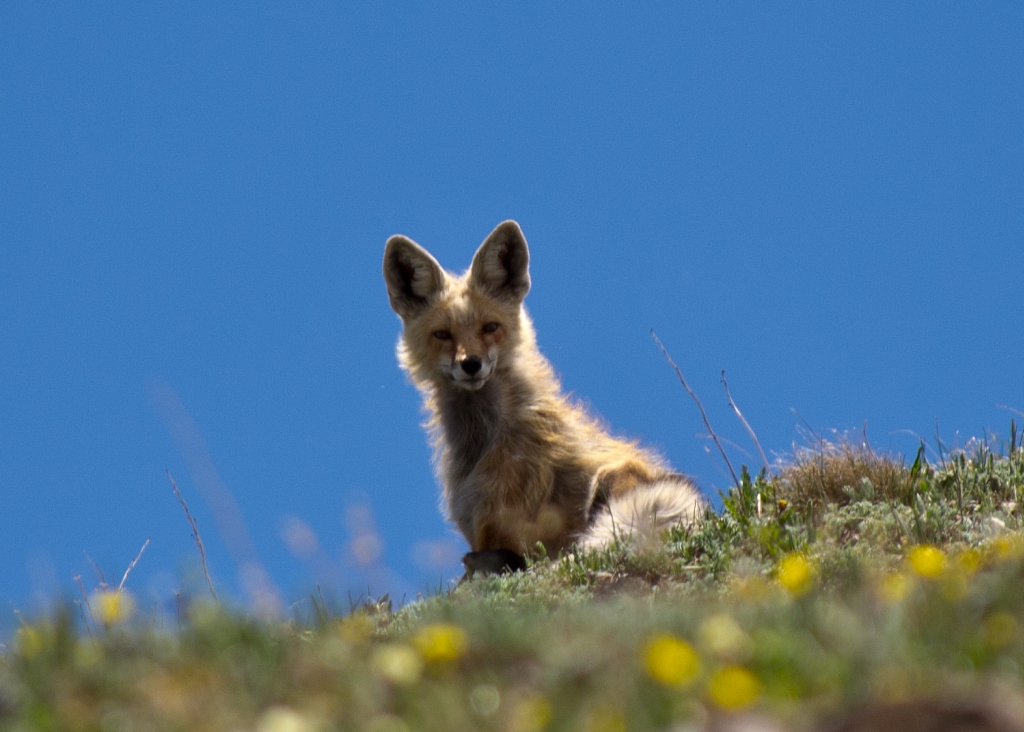 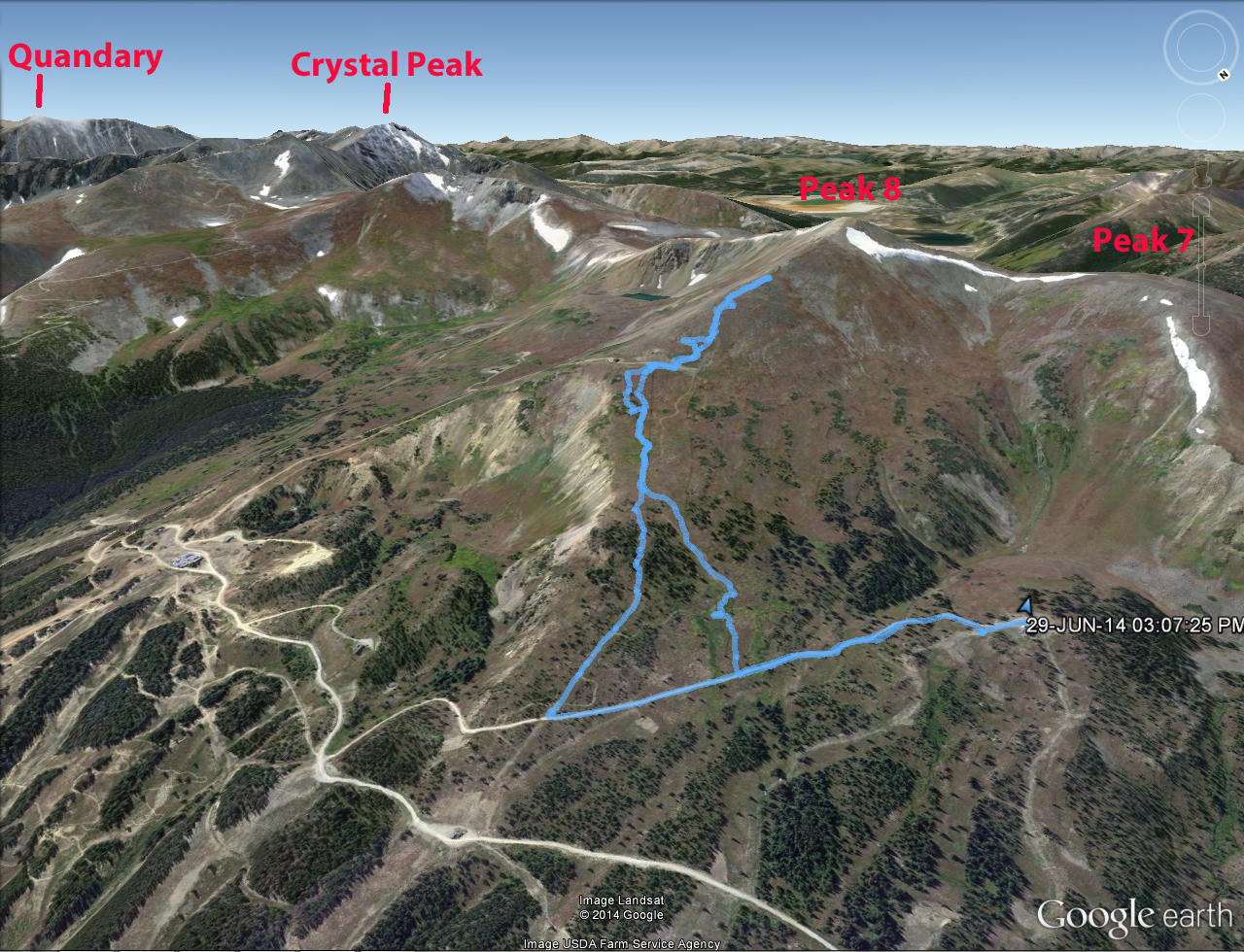 We decided to explore Breckenridge a little bit more after our Quandary expedition and headed over towards the base of Peak 8.  On the way we found that the gondola was free (at least in the summer) and parked (again at a free lot).  The gondola was nice, but the plexi-glass windows were really scratched up, presumably from skis and poles, which made it slightly difficult to see outside; but it was still very fun to ride up in the gondola on what was a gorgeous day. Below are two pictures from our gondola experience. 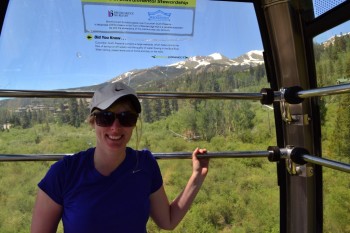 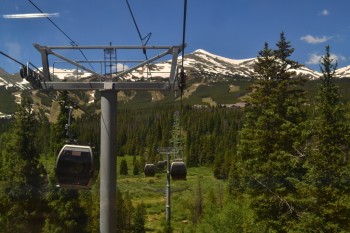 The gondola drops you off just off the base of Peak 8, so we walked past a little lodge and on to the lifts.  We found out that you could rent mountain bikes at the base and then get a full-day lift ticket to go up the mountain and then back down on your bike.  It sounds and looked like a lot of fun, and we plan to go back with our own mountain bikes to ride.  We opted to buy a one-time scenic lift pass to ride the Independence Superchair up to the bottom of the Whale’s Tail (the structure that connects Peak 7 and 8 and forms a beautiful bowl). 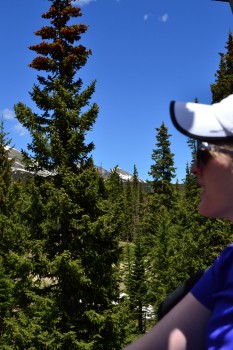 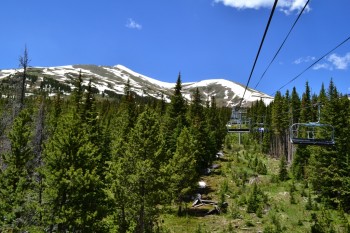 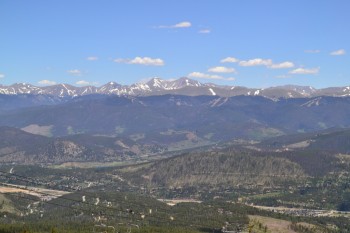 The ride cost $10 each and was well worth it.  Neither of us had ridden a ski lift in the summer and it was a very different experience.  For one thing, you are much higher up, since there is  roughly 6-8 ft. of base snow missing below you!  It was a perfectly clear day and looking around we could see Gray’s and Torrey’s Peaks off in the distance behind us, Peaks 9 and 10 to our left, and Peaks 7 and 8 in front of us.  Above are some of the images from the ride.

As we neared the top of the lift we prepared to unload for the first time wearing shoes.  It was easy as pie.  Now at the top we had to decide what to do.  Our first decision was to head over to what appeared to be a rugged scenic overlook just off to the left of the lift.  Once there we looked out at where we had come from and then on to the mountains beyond.  It was quite a sight.  There are a couple photos below from our photo op. 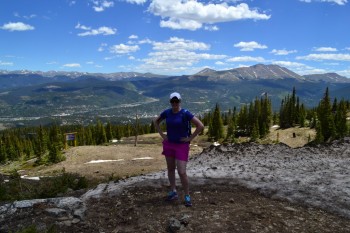 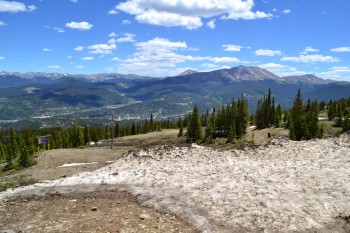 We took a look around and decided that we’d head up towards Peak 8, following the T-Bar lift. It was very steep and we almost turned back at first, since this was supposed to just be a relaxing day. But we kept telling ourselves that we’d just go up to the next ridge to see the view, and then the next ridge, and then the next ridge. Eventually we had a mission to go until T-Bar ended. The last portion of the T-Bar route was very steep indeed. Using our GPS and Mapsource we calculate that the last couple hundred feet of the climb is at a 42.4 degree angle (or a 45% grade). Whew! Below are some pictures from the climb up. 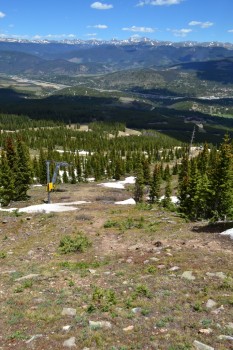 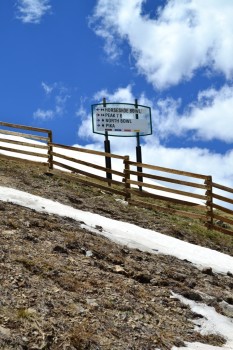 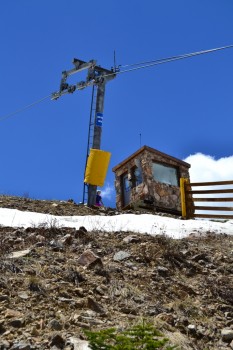 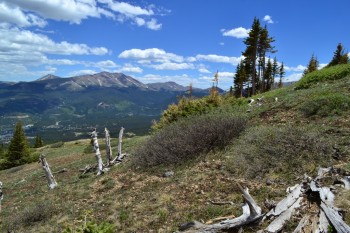 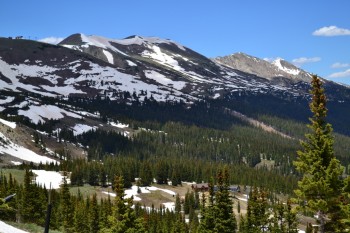 At the top of the lift we took a seat on the steps of the T-Bar operations cabin, and suddenly Allyson spotted an animal up the ridge. We took out the telephoto lens for the camera and tried to spy what it was. Zooming in on one of our pictures we could tell immediately it was a red fox. We decided to try and get just a little bit closer, and as quietly as we could we walked up and away from the fox. Very abruptly after coming over a little ridge the fox was in plain sight, sitting down and just hanging out. We snapped as many pictures as we could and then the fox decided it was time to move on. Below are the best pictures we took of our fox sighting at 12,200 ft. 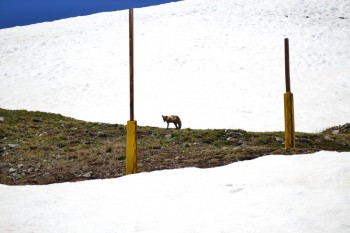 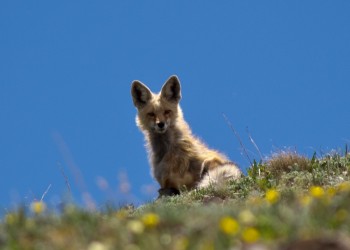 We attempted to follow our fox friend, but he was long gone. However, we did see the false summit for Peak 8 and decided we’d keep going until we reached it. On our way up we began to encounter the first large patches of snow, and since we hadn’t planned a real hiking day our sneakers didn’t enjoy that very much thus definitively ending our trek. Once at the false summit we looked around at the Dillon Reservoir, the Ten Mile Range, the Front Range, and Breckenridge below us. It was quite a sight. Up above us loomed Peak 8 and just off in the distance Peak 7. Below is a small panorama and a few pictures from the false summit at 12,615 ft. 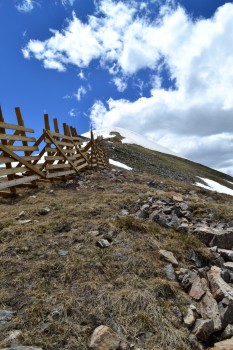 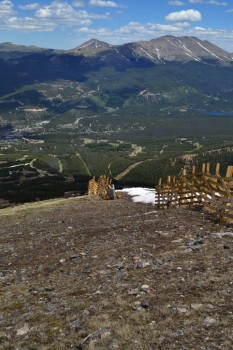 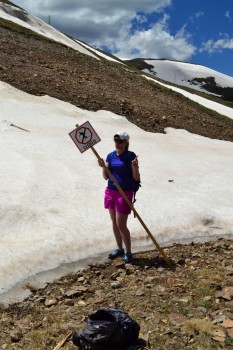 We began our descent and realized for the first time just how steep the climb really had been. The terrain was loose rock and gravel for much of the climb down and some mud towards the top, it was definitely slippery going in sneakers. We decided to try another route at a crossroads and instead of following T-Bar down the rest of the way climbed down Pika and Ptarmigan. We thought this alternate route might be less steep and offered us more opportunities to explore. This route had quite a bit more terrain to navigate including bushes, streams, mud, etc., but allowed more ease in the descent since we were no longer on a double black diamond. We were very excited to reach the bottom of the run and head back over to the chair lift for our ride down! Below are a couple pictures from the descent. 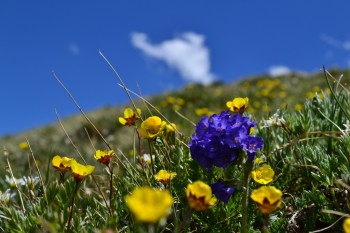 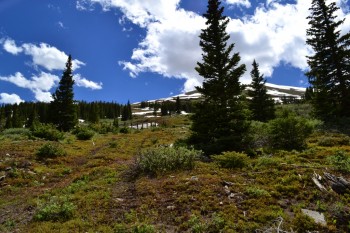 Back at the chair lift we got in the non-existent line and hopped aboard. It was really exciting riding the chair lift down and was probably the first time we’d ever ridden a chair lift down the mountain. Back at the base we headed to the restaurant Seven for some burgers and refreshments. It was a day very well spent and we were very excited about our unexpected wildlife success. We’ll be back soon with mountain bikes and with our hiking boots to finish what we started! Until next time, stay classy Take a Walk readers and vote for this picture so we can continue to share with you our Colorado photography and enhance your viewing experience.

One thought on “Breckenridge Peak 8 Fox Sighting and More”